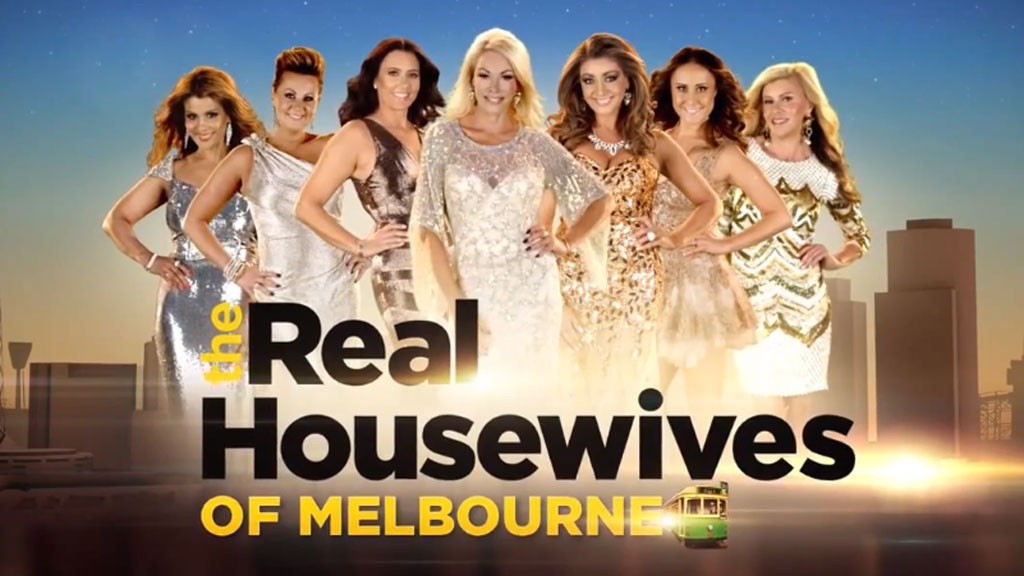 Welcome back to the Real Housewives of Melbourne, all the spoilers after the break!

Wow, last week we left the ladies all het up after Pettifleur said she wanted Gamble to 'think about' the reasons that she was inviting her to her wedding. Gamble told her "Fark off!" like any self-respecting Aussie bride would, I farking would, what a troll! I wonder what excitement tonight will bring??

We open on the end of the party, no one can believe that Pettifleur would do that and Gamble is distraught. Gamble says she doesn't really want PF there but sees it as an olive branch but Gina says "she wanted a tree." Seems like PF's chip on her shoulder has turned into a boulder, I think she could have been a lot more gracious about it all but she has made it all about her again. She is feeling on the outs and I get it but just accept the invite and then RSVP that you can't go! Gamble is in the kitchen crying, and Jackie goes out and tells her that she shouldn't have done but PF just says, 'ok, beat me up then!' Ugh, I just can't with this woman, if she has any redeeming features they are cleverly hidden.

Gina and Gamble come out and Gamble says "I don't want Pettifleur to be upset, I don't want her to feel left out," WUT, now? You are soft a cream puff, Gamble, PF is not worth your time. PF is trying to storm off in a huff "EVERYBODY IS AGAINST ME NOW, ALRIGHT!?!" she is screaming from the stairwell, geez, this is like a party you went to when you were 13 and you had to invite 'that girl' who no one liked because she was a total backstabbing bitch to everyone, but you felt sorry for them and, of course,  she's just a total bitch and everyone starts screaming at each other till they leave in a huff! Gamble then tells her she is going to get the invitation out of the garden and that PF is coming whether she likes it or not, they kiss and make up. Lydia is also crying, she is realising that she has caused this big rift, Susie sees through it "She's like a cat, always lands on her feet."

Cut to Gamble and Gina going lingerie shopping, well Gamble is, for her wedding night. She looks gorgeous 'like a little Barbie doll' says Gina but some of these outfits are pretty questionable! Gamble cannot believe she is spending $2k on something that 'is going to get ripped off me anyways.' Gina wants to know how she ended up after the cocktail party, Gamble seems ok, she is 'resigned to the fact that she and PF don't really get along.'

Over at Janet's place, she is hanging with her ex, the Silver Fox Brian, he's cooking in a comedy apron and they are having 'family dinner' that he is cooking. She is telling him that she went to the doctor and she was diagnosed with PTSD after her son had a terrible accident, he had horrific burns to much of his body and needed a lot of treatment. Brian just wants to know if it affects her sex life, way to go Brian, your empathy stakes are pretty low, eh? Fiora and Toy, Brian's kids, turn up as well as Janet's sons, Paul and Jake, it's a lovely scene and you can tell that she secretly wants to be back with him. In an odd way, I am rooting for these crazy kids. She tells the kids about her diagnosis as they eat, she wants Brian's kids to know that she hasn't abandoned them, it's sweet.

Brian decides to lighten to mood by declaring that he had his chest waxed for Janet, talk then turns to a family holiday in Pattaya, the sex capital of Thailand, which is where he probably indulged in the 'happy endings' he told Janet about last episode, gross, going to Pattaya is bad enough but taking kids? Anyway, turns out Brian told his KIDS about the happy endings and they, in turn, told Janet who was all like, 'I give them to him for FREE! He owes me thousands!" lol. Brian says "When I was getting the happy ending the girl said 'Why you calling out Janet, Janet, Janet!'" oh man, this family is weird!

Lydiot wants to talk to Gina about Susie. Gina thinks that Susie is maybe  going for Lydiot because there was a time when Lydiot and Gina did not talk at all and Gina spent a lot of time talking to Susie about Lydiot (did you understand that? LOL). Lydiot says she finds it funny that they had that fight as she feels that they are so close now and Gina says "Yeah, well it's like Stockholm Syndrome, you fall in love with your abuser!" Gawd, I love this woman! Gina thinks that Susie is not happy but says that Lydiot moves through friends, maybe she thinks that she has been 'dropped' by Lydiot? I don't think this is the case, I think Susie has a lot of tea on Lydiot and there will be more dramz to come.

In the ultimate in weirdness, Susie's SONS are setting up an internet dating profile for her, oh, here go hell come! They want her to get back in the saddle and not put up 'the wall'. It's all kinda sweet but definitely...odd.

"I'm absolutely hedging my bets" says Janet about her renewed friendship with her ex Brian. To this end, she is on a date with Christopher who looks mostly age-appropriate but has turrible, greasy long hair....George McFly called, he wants his hair back, dude!

Janet has the right idea about not settling down, "I think you have to try a little one, a big one, a black one, a yellow one, a rugged one..." gurl you are speaking my language, git it! But things turn all sorts of awks after the Chardonnay arrives, Christopher appears to as skilled at conversation as a dead horse, Janet is nervous too and it's painful to watch. She wants to know "If I asked a friend of yours 'Who is Christopher?'" which is actually a great icebreaker but he talks about himself in the third person which is not cute. But things warm up when he asks if her ex-husband is dead and she quips "I wish!" a second date is on the horizon after a bit of 'handsies'. 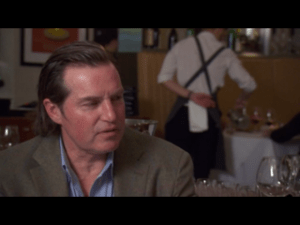 It's the day of Gamble's bridal shower and the theme is a DOOZY! Everyone must come in ONE OF their wedding dresses, of course, Chyka is hosting and her dress is an amazing 1990's concoction of lace with a flattering sweetheart neck, I can't wait to see the others! 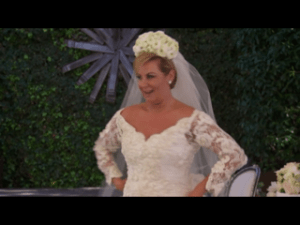 Susie and Pettifleur turn up and PF's is suitably gaudy with an additional fur, she brags that she is the same size as when she was married 17 years ago, of course you are love, thanks to a scalpel! 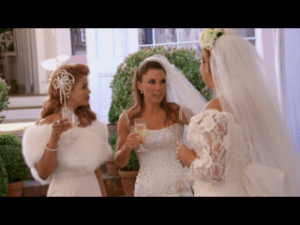 Janet doesn't have her dresses, one went straight in the bin the next day as it was trashed and the other she made into a QUILT? Wut now? Hilarious.....imagining Janet quilting is like imagining Trump talking to a Mexican! 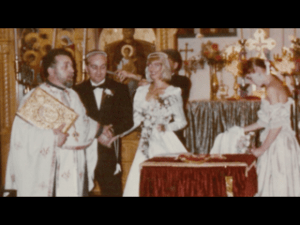 Gamble turns up and sadly she is also in a non-wedding dress as she threw out her old one only the week before! Ahhhh, the 90's, I love this pic. 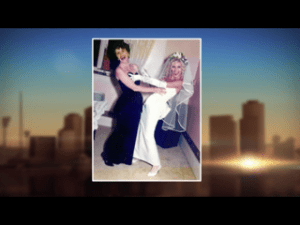 Lydiot is wearing something that makes her look like a budget, Hallowe'en Frida Kahlo but it's Dolce Gabbana apparently but it is fugly as fark. Money can't buy taste... 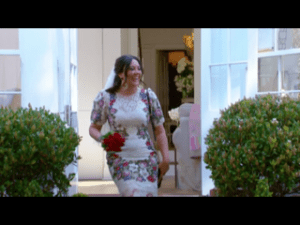 First up they grill Janet about her ex-husband, Chyka wants to know if this is the guy 'with the Viagra drawer?', yes, Chyka, the one and only! She also tells them about Chris, the farmer she went on a date with, but I don't think this has 'legs' she wants some of that Brian magic back in her life!

Gamble is getting emotional talking about her step-son, Luke, who is a real sweety. Their relationship is so wonderful to watch and was not always close either, they worked hard at it and now she considers him 'my full son.' She cries a bit telling the ladies that she always wanted kids but Luke might be the closest she has and I empathise, I am close with my step-daughter too but the baby making gates are pretty much closed to me. "When you're a woman who hasn't had a child around women who have, they don't understand how lucky they are," she says, amen sister, a-bloody-men.

Oh man, this shower is getting so EMOSH! Susie tells them about a terrible accident that her son had on a quad bike with her ex but PF is upset that her Dad never walked her down the aisle, ahhhh not the same things, PF! Jackie calls her on her shiz, "what are you crying about? Someone just shared about almost losing their KID??!!" Pettifleur felt she had a 'need to share it, it was the right time.' Ah, yeah nah.... 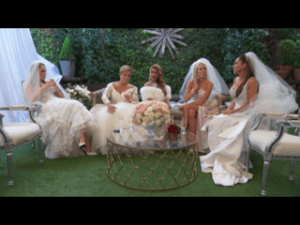 Janet tells a hilarious story about her first marriage, her husband didn't even propose she just said, "I'm getting married on the 20th of July if you want to turn up, then turn up!". She and her Mum bought all the food for the guests, cooked it, then she popped in a to the church in her frock and he rocks up late but he came. She now rings him every 20th of July to say Happy Anniversary, cute.

Susie and Lydiot decide they are going to clear the air, considering it's near the end of the ep, this is going to get EXTRA! Susie says that Lydiot spread rumours about her sleeping around after she split with her ex but Lydiot says 'I don't even know you, why would I spread rumours?' which is condescending as hell and Susie knows it. Lydiot tells her that there's no truth to anything and can't believe she has held a grudge for so long but she is defensive as hell as well, which implicates guilt. Susie is kind of dumbfounded as she has been friends with her for 30 years and all major milestones and parties for her, "I don't know what Lydia's idea of friendship is, but I think it's pretty different to mine," yup.

Lydiot then tell her that she is friends with Gina again and Susie is a bit dumbfounded about this as, dun, dun, dunnnnnn, Gina hasn't told her that? Susie just wants to draw a line in the sand about their whole relationship and it's a silent but deadly detente. "I mean if you are that bored," says Lydiot. "Go and bake a cake." 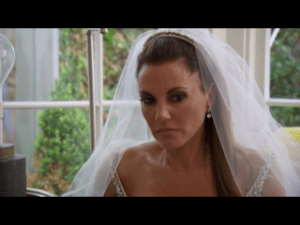 Oh, the kindling is burning and I think next week we will see a BONFIRE!! Woot! But, hang on, where was Figaro???? Is he free at last??