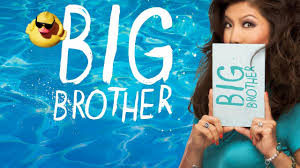 Big Beech (typo and it stays) was evicted, stole Pablo (the real star!) and now it's time for a new HOH on Big Brother. Let's just hope it's Paul, so that he can get revenge for Pablo, or Victor, so that he can just be Victor!

Back in the chicken coop! They all talk about how important it is to win this comp. James and Nat have just found out about the new plan at the last second and they are running scared with right reason. They realize they're on the outs, so we get a flashback of when they go tell Michelle and bring Corey along.

He apologizes, while Meech, well, cries. Nicole comes in and Meech cries/tells them that she would take out the two strongest ones if it was her. She tries to talk Nic into keeping her, and gets Corey into trouble by bringing him into the middle of it. He had previsouly told her he didn't want her gone, but he won't cross his lady. Corey is like, uhhhh, I, do what now? Christmas, puppy dogs, reign deer!

After one hour and 12 minutes, James still hasn't gotten one egg to do anything at all. His egg literally just goes right through the O. HAHAHA. Everybody keeps missing their last letter until finally; everybody thinks Corey is going to get it and he does NOT. Paul gets his second letter and now it's a four-way tie.

I think they're dragging this shit out because the house is dead as a door nail, personally. There is no more drama to entertain us. But also, this is not entertaining anymore. James finally gets a letter down. Oh, yay. More, that was close, oh, I thought you had it. Good job. Buzzzzzz. Eagle squawk.

And then VICTOR WINS IT! VICTOR WINS HIS THIRD HEAD OF HOUSEHOLD! Talk about the Comeback Kid! If anybody should win the half million, this guy earned it and earned it hard. Paul hollers into a chicken's face and James and Nat are scared as shit.

Vic celebrates in the Have-Not room and says, "Un-evict-able!" Werd, Vic! Get it! Corey comes in and dude-bro's him to death. Nic and Paul join and #FinalFour, yo! You guys, I just don't know how I feel about this final four. Nicole and especially Corey, are worthless. I am only game if it gets #Friendship Vic and Paul to Final Two.

Natalie and James predict they will be on the block, while the final four says that was scary because Nat is scary good at comps. They then talk about how Meech is a disrespectful meanie. She just went and took Pablo from her daddy. *Pablo's picture turns black*

Paul talks about how he and Vic have been through the ringer. Paul and Victor final two sitting duck flashback. *Brought to you by BB #SittingDucks tomfoolery.

The guys give Nicole shit about her small schools in her hometown. It's actually pretty funny. See- sawing alone. The teacher says only one of you passed the test. Eh, you'd had to of been there. *Brought to you by BB make fun of Nicole tomfoolery.

Nat and James get the sads and talk about how it'll be me, no me, no me, that'll go home. They wish they wouldn't have trusted the two dullards, but alas, they did. They decide to fight for it, darn it! James will man-up and fight for his cheerleading lady-love!

Corey is sleeping in the Have-Not bed and repeats, "Harry Potter" and sometimes "Harry Potter Story" over and over. HAHAHAHA Good one, BB! James tells Nat that she doesn't have to like him because he likes her. Jameeeeeeeessssssssssssssssuuuuuuuuuuuuuhhhhhhhhhhhhhhh! She tells him that she's dated all kinds of guys; ugly, cute, different races; but he's the first Asian guy. He's all, "Ugly guys?"

Nicole tells Corey he needs to make sure that James doesn't talk shit to Victor. Sure enough, James tells Vic about his final four with Nicorey. Victor believes him, but Victor don't care; he sees his game. James is only loyal when the loyal does him good. James tries to explain that Nat wanted him to stay loyal, it was...Oh shit, look who it is, oh hey, Corey and Nic! Well, gotta go! K, thanks, bai!

Paul tells them what he was saying and now James is really screwed. Nic is really mad, but Victor tells them it doesn't matter. They're all good. They did him a solid, he'll do them a solid. #Friendship. James tells Nat that he spilled the beans to them all on purpose for her so that they'd put him up and keep her. She's completely verklempt and hides under her hoodie to cry. "What am I gonna do in this game without my James?" "You're gonna win." Well, I'm not heartless. Sniff.

Victor announces the nomination meeting. His first key shows James's face, and then his second key shows: Natalie's face. Nobody is surprised, of course and he tells Nat she's just a pawn and that James sent him home and he's sorry.

Nat doesn't know what she'll do without James, while Nic is so exciteeeeeeeeeduh. Paul is very shouty about how thrilled he is about the situation. Vic is feeling great; karma is a bitch and he hopes to keep the noms the same. James feels bad about his part in Nat being up and wants to win Veto for her sake. See you Wednesday for the POV comp! Woot! So close to the end!