I’m back with your recap for Big Brother and we have reached S20! Can you believe that? 20 seasons already? That’s a heck of a lot of house guests and “But next's!” Ready to meet the new crew? Let’s get to it.

Julie tells us that this season will be full of tech twists... “hacks, apps, and robots,” which should be interesting. Or not. We shall see! On with it, Jules! And with bunch of alumni houseguests in the audience, we meet our first eight… 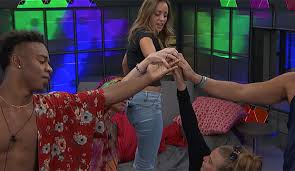 The typical squealing and shrieking of the women commences as they head in, and then we get our next eight: Haleigh Broucher, a college student from Texas, Faysal Shafaat, a substitute teacher, Scottie Salton, the token D&D playing-never-been-kissed-virgin, Kaycee Clark, a pro-women’s football player, Rachel Swindler, another Vegas showgirl, (floaters, you better grab a life vest!) Chris "Swaggy C" Williams, a babysitter that can’t swim, Brett Robinson, a cyber security engineer, and Angie "Rockstar" Lantry. Well, Rockstar. She’s a self-proclaimed pagan witch because she did a lot of researching when she was 12, which was asking if God was a man and when she was told yes, she said, ‘no way!’ and there ya go!

Chenbot tells them all pretty quickly that they have a challenge already. In a division of two groups - four guys and four ladies - one team will remain safe for the whole first week. They separate into groups and the group of: JC, Winston, Kaycee, Tyler, Brett, Bayleigh, Angela, and Rachel gets dumped into a darkened room to find folders with the word “Escape” on it, with one having the words, “Escape and Play” written on it so that the player can win the comp and also reprogram the supercomputer. One player will be left without a folder and be punished.

Alas, Angela finds the “Escape and Play” folder, while Kaycee doesn’t find one and is left with a punishment.

The other group has to build the word “house guest” from letter blocks they're harnessed over, and stack them up so they don’t topple over. The last one standing in this group will also get a punishment. Swaggy C (ugh, I hate typing that already) wins by a hair, and poor Sam loses by a hair. 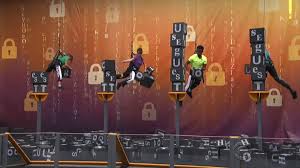 Angela goes to Gaggy C and tells him she'll be looking to keep her group safe, not any of his, which doesn't sit well with him. Not too smart of a move to tell him that straight up, Miss Thang! Gag now has her in his mind for eviction.

We find out about the punishments that Sam and Kaycee got and they are pretty comical. Kaycee has to wear a rainbow unitard and a pinwheel of doom that spins randomly. When it does, she had to stay wherever she is until it stops. Sam’s is the ultimate, though - she’s been replaced by a robot. Literally. She has to talk through a Robo Sam that digitally matches her voice and movements. The robots face and her voice is kinda hilarious together. The house guests even hug the robot and hold her hand. It's so stupid it's funny. Should make for an interesting week! 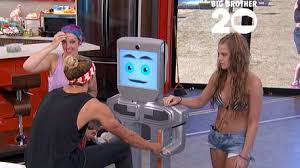 Finally, there’s one more competition, and it’s an endurance one where whoever is standing last gets to reprogram the week and keep two of the move in groups safe. Of COURSE, Gaggy C wins, (I don't know if I can keep typing that, either, it's hard to snack. Guacamole if you're interested. Anyway.) so he keeps his group along with Scottie, Faysal, Kaycee, and Haleigh. 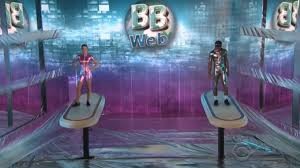 Who will win HOH? We’ll find out on the next episode!