Welcome back to Big Brother S20:E02 as we we find out who will become our first head of household and also who the first two nominations will be. Let the drama commence!

Chris "Swaggy C" Williams - aka Gaggy overhears a conversation where Angela Rummans and Kaitlyn Herman are bad-mouthing him and walks away mad at the “idiots.” Angela is angry that he didn’t keep her safe which is rich since she told him to his face she wouldn’t keep him safe if she won the comp. Think with your brains, kids! 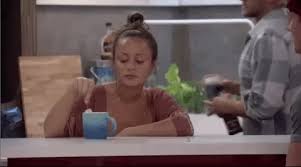 Kaitlyn eventually does some chakra realigning-meditation type stuff and chills about Gaggy. She also thinks that the spirits are going to guide her to HOH. Uh huh. Good luck with that. Later, she leads a yoga class and Gag is all, oh em gee, why am I aligned with these hippie nutcases? 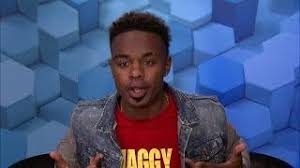 Sam Bledsoe is released back into the house as a non-bot for a bit while Haleigh Broucher, Angie "Rockstar" Lantry, Kaitlyn, Faysal Shafaat and Gaggy form an alliance.

The HOH competition begins! The house guests have to cross a balance beam to retrieve a dot and then put it into another players tube. When said player has ten of these deletion dots, they are eliminated. Last person standing wins. 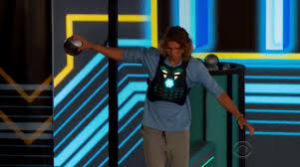 Nominees Sam and Steve Arienta are the first ones targeted, and are quickly eliminated. Duh, nobody wants a “target on their back.” Tyler Crispen ultimately wins the first HOH.

Tyler is beside himself with his win - he didn’t want to be in charge, he also didn’t want to go home! Waaaaaah!  Also boohooing is Sam, who is turned back into a robot before she can take her case to Tyler. She has to go to him as RoboSam, who reassures her she’s safe and not on his radar. He hugs the robot and it makes me giggle because it’s so STUPID/FUNNY.

Tyler sees a bunch of peeps that are with Gaggy that try and convince him not to put up Sam and Steve, and he thinks that they're all on one side, so he won’t go that way on his noms. When it’s time for the first nomination, he picks Sam and Steve, but wimps out and says it’s only because they were the first two eliminated from the HOH comp. Brah! 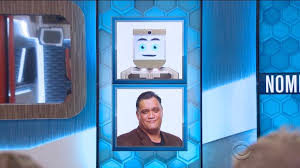 Will Gaggy continue to speak of himself in the third person? Of course! Will Sam continue to cry and be depressed? Duh! Will Bayleigh Dayton and Gag hook up some more? More than likely! Let’s tune in next time and find out!  Bye for now!