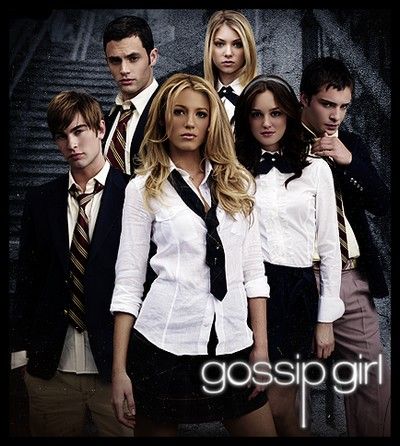 Welcome to a new series, the ReWatch with the lovely Orvilla Bedinbacher, going back to her roots on Gossip Girl season 1.

Welcome to your Gossip Girl hard on. Thus begins your rewatch of one of America’s most beloved night time soap drivels. If you aren't re-watching this show, why are you here? Do you want to understand the lifestyles of the rich and elite? Do you have a need for pain? Are you curious like a cat and that’s why they call you Whiskers?

Let’s get the festivus started.

Guess who is back? Serena Van den Woodsen. Her name deserves to be said with an echo: Serena Van der Woodsen. Serena is New York’s toast of teen vogue. She left her private school penthouse digs to deal with her naughty ways. It seems the Big Apple didn’t have as much bite while Serena was away. She is ready to forget her past transgressions and get her life back.

The Humphrey siblings are back too. This brother and sister combo gag me. They are a far cry from Brenda and Brandon Walsh. I have the urge to drink milk whenever these two are together. Shmanyways, Twiddle Dan and Twiddle Jenny are back in the arms of their oh woe is me creative type dad in New York. They were on a weird sabbatical staying with their mom whom broke free of her ties with their dad.

Dan Humphrey (Lonely Boy) spots his crush Serena at Grand Central Station. His heart is all a flutter for this ditzy long haired blond ‘it girl'. As she leaves the train station, Dan stares at her in a longing fashion.

Serena makes her way to see her mom at Blair Waldorf’s party. She doesn’t stay long. She has enough time to not speak to her bestie Blair and get Gossip Girl reader’s teased with drama.

It’s a new day and Bad boy Chuck Bass and boring ass sporty Nate Archibald are on the bus for the first day of school. I’m so confused by this. Why are they on the city bus? They are freaking Richy Rich. Dan Humphrey is on the same bus. He is in full on stalker mode by listening in on their torrid convo. They discuss Serena and her return. Blah blah. So torrid…

Blair is on the steps of the Met with her Mean Girl Betty’s. Serena shows up and wants to hang. She tries to reclaim her friend and her throne but Blair is having none of it. There is only one Queen B. Not Beyonce, BLAIR WALDORF.

Little Jenny Humphrey a mean girl wannabe is in the crop of Queen B’s minions. Jenny has the Single White Females for Serena. She thinks Serena is sooo cool. She tries to give Serena an invite to the Kiss On The Lips party. Blair squashed the idea and Poor S gets none.

Serena stalks Blair at a bar. How is this teen drinking? Serena with her dastardly ways worms herself into Blair’s good graces. Blair leaves her drink and Serena to go Nate it up. You should never waste a good hard on. Blair can’t let those balls go blue.

Serena is catching feels looking at her drink. Chuck shows up at the bar. Serena is getting drunk. He makes innuendos. Serena is having a sense of responsibility and notability. She doesn’t want to get drunk on an empty stomach. Chuck takes her to the kitchen. He is going to get this girl some vittles and then some vittles.

Back in Nate’s hotel room, Blair is all Victoria’s secret and Nate is feeling guilty. He tells B that he had sex with her bestie. This reveal comes at the same time of Chuck telling S that he knows about her affair. What a slut. This is before slut shaming was a bad thing to do. S is pissed and runs out of the kitchen. Who does she bump into on the way out…Dan.

Blair kicks Nate out. She is ready for a V for Vendetta.

Back at home, Nate tells his gambling needy dad that he is now on a break from Blair. This isn’t going over too well with dad. He is already on some get these kids married so we can get some dolla dollars bills y'all.

Somehow S and Dan have a lame encounter. This leads to a date proposal. Momma S meets Dan and she is none to happy about this date. She used to date his daddy Rufus. Oooo scandalous. Sorry Olivia Pope. This is way to thick for your blood.

Momma S makes her way to Rufus’s gallery. She lets him know he is washed up creative type with no true worth. He let’s her know she is a washed up whore and has no true worth. They exchange sex glances and annoyances. Blah boring.

Everyone is getting ready for the Kiss On The Lips party at their own Lifestyle of the rich and famous homes. Rufus can’t believe his Jenny is finally in the tampax part of her life. Dan is getting ready for his date. Blair is almost ready for her close up and her mom interrupts. From this we get a big reveal of Blair’s eating disorder. Gawd, of course! What rich girl doesn’t have an eating disorder? Way to bring something to the table. Way to give this character some chops. I mean pork chops.

PARTY TIME! EXCELLENT! At the Kiss On The Lips party, everyone is waiting for their character to have an AHH HA MOMENT. Chuck flirts with Tampax Little J. He really wants the V card. He pushes to hard with booze and dickness.

Dan is wildin out by taking S to his dads concert. She is flattered and bored. They flirt hard. J sends an emergency text to her brother. Chuck is causing her mad issues. Lonely boy and S go to her rescue. The beepers and cellphones are all a buzz with Serena’s arrival. Blair is pissed. Serena and Dan spot Chuck being a deviant asshole. He has Jenny pinned. Dan punches Chuck. Serena blasts Chuck. Chuck threatens her character. Blair and Chuck have vendetta feels.

Kristen Bell Ending: “Spotted Serena making a heroic exit from B's party. Bad for her there is school on Monday. So until next time. You know you love me. Gossip Girl”.

Music Moment- JT what goes around