Welcome to my 'I Can, I Can't' post where I rant about things I am lovin' on and things I am hatin' on in the celeb world! Got your own rant? Email me at: iambeckymae@gmail.com

All hail the QWEEN's of the shit show that is the VMA's, Drag Race All Stars 2!! WOOT! Dressed as icons of VMA's past I got most of them...Alaska=Britney, Ginge Minj='Like a Virgin' Madge, Phi Phi=Caca and her attention whore Meat Dress, but WHO da fuq is Katya and why did Roxxxy Andrews pick that curtain of a KK look? Detox was the only one to come as herself because...well, Detox. Collectively, they killed the red carpet and I am horrified that they didn't perform. Plus WHERE WAS ADORE???? I'm worried about Adore...

Oh, the 'friend zone'....poor ol' Drake pulled out all the stops with his adoration of Rihanna BEFORE and during the VMA's. First the goddamn billboard... 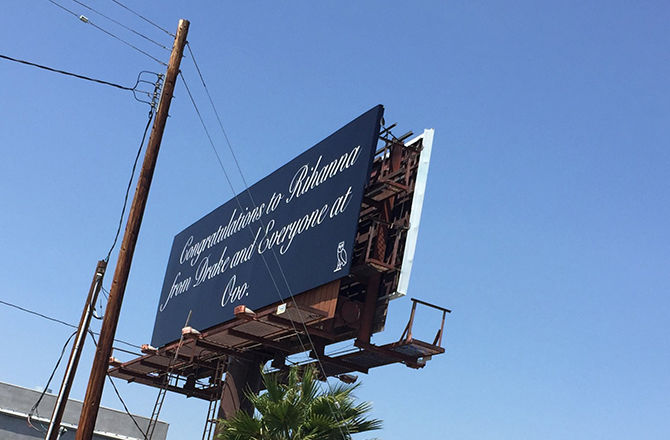 Which is, in Rihanna's own words, just a bit 'extra'. But then we got the friend-zoning of the century! ON stage, millions watching globally, the cheek turn!

Awwww, Drake, first you admit you've loved her since you were 22 years old and then you go in for the full pash and get denied! I'll admit, I don't really understand Drake, I've watched more of him as Wheelchair Jimmy in Degrassi than I have any of his recent videos. Hotline Bling was lost on me, was it about jewellery you wear on the phone? A blinged out iPhone case? I don't know but I CAN with Rihanna denying him, he seems sweet enough and I am sure he is her pity shag but enough with trying to push it out publicly, Rihanna has her shiz locked down tight these days, she don't need no labrador-puppy-man cramping her stylee!

Really, it was VM-Ye's, amirite? MTV gave Kanye 4 minutes to whatever the fuq he wanted PLUS Beyonce won pretty much everything AND Tay-Tay got banned from the VMA's 'allegedly'. This was ALLLLL about Ye for a bloody change. I didn't watch his blow hard speech, I don't even listen to his music, I CAN'T with all of it. Please, let's starve this man of his attention-oxygen before we all succumb to his psychophantic (spell czech STAYS!), brown nosing, fashion-backward ways!