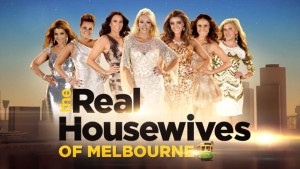 Welcome back to E2! Exciting news in GBC land as we have BOTH my fave Housewives following me on Twitter, Queen Gina Liano and Queen Gamble Breaux, WOOT! Life does not get much better....well, maybe if Fassbender got lost in my neighbourhood and needed directions, heheheh.

First up we meet Jackie's fabulous old school Euro-Aussie mother, Lana who has flown down from Newcastle specifically to ask them when they are going to give her grandbabies and make her a 'bubba'. Jackie runs hot and cold on kids and I get it but her family are Serbian (I think?) and it's impossible for them to think about life without kids. When Jackie opines that maybe they might not have kids you can literally hear Lana's heart breaking into millions of tiny shards "If you don't have kids then I fear you are really going to miss out on something in life" she sobs. Knife twisted, Mama Lana! 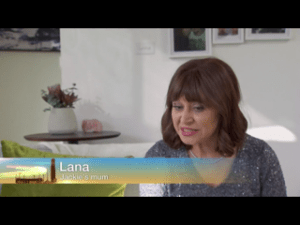 Lydiot is still driving around with her 'house friend/hostage', Johanna, she is going to miss their drives when she can dole out Johanna unwanted advice and patronising directions. But today they are driving to the local Porsche dealer because Andrew, Lydiot's hubby, is buying her a new car. Lydiot tells us this is because he is 'madly in love with me and I keep him busy," she winks. "I keep him VERY busy if you know what I mean..." Ugh, her innuendos are truly cringeworthy and she is a terrible flirt with the very young salesman too. "Oh you know I don't mean it and I know you're married," she simpers. The sales dude looks confused. "Ahhhh, I'm not married..." Then Figaro her hostage dog, jumps in the backseat, ready to flee. My god, I have just realised that Lydiot just keeps everyone hostage until they can run from her! So much Stockholm Syndrome!

Across town, Pettifleur and Gina are meeting up so that Queen Gina can give PF a bit of advice following Bake Day-gate. I would ALWAYS want Queen Gina on my team but I don't see this friendship lasting the season, PF is just too deranged. Gina wants to know why PF called Gamble a Black Widow but PF won't tell her the source so I'm fairly sure she is fabricating. Gina tells her that it's a mean thing to say and she shouldn't talk about the ladies (but then there would be no show, Gina!). Gina then throws a few truth bombs at PF whilst telling her she acts like she has a chip on her shoulder. "Not everyone thinks you are quick witted, YOU think you’re quick witted!" she says. Then the classic "Raise your argument, not your voice." which is something that I think everyone could do with taking up from time to time...

Janet goes over to Jackie and Ben's sex palace where she has interrupted their afternoon delight, TMI kids! It seems that Janet's ex hubby wants to meet up with her and she is freaking out that he may want her back but he was a cheater who went onto dating sites and strip clubs with a bunch of Viagra in his pockets. Jackie's 'angels' are telling her that this is exactly what is going to happen and secretly, Janet wants this too.

PF's son flew the coop a few months ago after a big fight where PF basically told him to 'shape up or ship out' so he shipped, with his girlfriend in tow. PF is so lonely now without him and wants him to come home but he's all like 'nah, I got this adulting thing down pat, think I'll pass'. Lawd, can you IMAGINE PF as your mother in law? I would get homicidal....PF also shows off an enormous artwork a 'fan' gave to her which looks like something you find in someone's attic or a strip mall gift shop in Poughkeepsie. Remember those Pierrot portraits we ALL had in the '80's? Yeah....

Susie and Gamble are meeting Chyka in Chadstone to buy Gamble a wedding present where they look at one thing, a drinks tray before deciding that they need a cocktail. Talk turns to the Black Widow comment and Susie tells Gamble she needs to be careful of Lydiot as she has a reputation for spreading undisclosed gossip. Then Lydiot turns up and things get all kinds of awks, you can feel the bad blood between Susie and Lydiot boiling over. Lydiot rips off the band-aid and outright asks Susie "Do you have a problem with me?" and her reply is "Yes, yes I do!" and it's on. Lydiot cannot believe how she is being attacked as she is such a 'mother, carer of people" which is hilarious. Susie says that she's less about caring and more about "changing outfits on her dog", poor Figs #freeFigs. 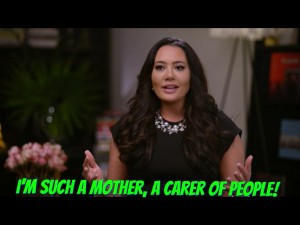 Janet is on a date with her ex, Brian, who is a bit of a Silver Fox. He's upset because she has been telling people that he cheated on her but he reckons he wasn't. They get into some petty fight about 'perception and truth' which is basically that she said they separated in JAN but he says it was SEP that he was dancing on tables at strip clubs with pockets filled with Viagra. Then he tells her that his daughter misses her and wants them to get back together which is leading them to think they should get back together too. Luckily, Janet scoffs at this, her dance card is filled with 25-year-old studs, she don't need no silver fox! He then admits that he got a few 'happy endings' whilst in Asia (I mean, who hasn't) which Janet is peeved about because she was "doing them for free"!

Pettifleur is in the gym with her personal trainer who is even MORE of a bitch than PF herself, she won't even let her rehydrate! She's also giving Madge circa Truth or Dare vibes...What's even more amusing is the full face of make up and the fact that PF does not sweat at all....botox or just not putting in the effort for the cameras?

It's wedding dress time for Gamble who was battling with Alin, her dress designer who has now turned into her wedding planner. Gina is rightfully suss about this, "just because he goes to weddings doesn't mean he knows how to organise one" she chastises Gamble. But Gamble is determined all will be fine, even though she is worried about her dress which will be pearl encrusted. At the moment, it looks like a rather large, flesh coloured doily, however, Alin is promising 'architectural lines' and 'no flowers' aka NOTHING like this dress at all. 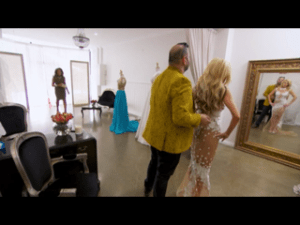 Chyka, Janet and Jackie are going horse riding with PF and Susie, they are discussing what type of outfit Pettifleur will be wearing, tight jodhpurs? Looking like the cover of Horse and Hound? Who knows.... In the other car, Susie is trying to give PF a nickname….”Piffy” but PF is having NONE of it. "My name is Pettifleur," she snottily retorts. When she gets to the horse she is riding she tries som horse whispering crap on it with her hot pink gloves massaging the beast. *please let it throw her....please let it throw her* 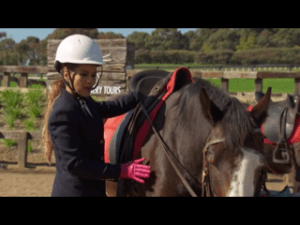 Who knew that Lydiot could write? She has a blog apparently and she is doing some sort of ridiculous photo shoot for her blog/paid endorsement site. She is dressed up like a sexy bunny/cat type thing with $500k of diamonds around her neck. "Blogging is REALLY hard," she says. "It's a full time job!" that you pay someone else to do so you can get dressed up as a tragic Halloween soccer mom trying to be 'seductive', right, Lydiot?

Gamble arrives and backs up MY version of events. "Probably not a lot of writing goes into Lydia's blogging," she says. "But certainly a lot of fun goes into it." Damn right! They start talking about the Lydiot/Warnie rumours which Gamble declares to be untrue because Warnie said as much on Twitter. Oh Gamble, you are smarter than you look but sometimes a bit more gullible.

Susie is confiding with her fellow horse riders that she and Susie broke up with their first husbands around the same time. During this, Lydiot was spreading a lot of rumours that Susie was getting it on with a few married men. Pettifleur is a bit shocked at how Susie is talking about Lydiot and doesn't quite believe it. But then Jackie gets on her high horse and says that the ladies would be shocked and appalled about what Lydiot has said behind all of their backs. Dun, dun, dunnnnnn. Shiz is gonna get real, real soon!