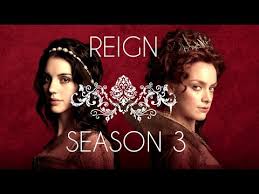 Mary has finally succumbed to her desire for Gideon, but is it desire, or is she just manipulating him for her own desire to Reign back on her throne in Scotland, leaving him and his queen in the dust?

Lord Dudley and Mary spar while shooting bow and arrows at breakable targets and he tells her she's super good at it as she matches him shot for shot. It's more of a mock-flirt in a way. Typical Mary verbal-foreplay when she meets a hot dude, if you will. Carry on, you two beautiful high-borns. She tells him that Elizabeth offered her the succession for her own sake, not hers and it's very clever of her. He tells her that he suspects she and Elizabeth have a lot in common. He says that even if they never have a great love, he's all in and committed. Will she have him? She will.

Later, Mary is getting dressed after sleeping with Gideon, and she confides in him that Dudley all but admitted he's still in love with Elizabeth. She worries again that once she takes the English throne the Vatican will put a man up and oust her. She says the next man in line would be Joseph Tudor, and she thinks the Archbishop has found him where he hides in France. Gideon has a plan: He will find this Tudor person and tell Elizabeth, who will then have to rescind Mary's accession. No accession, less death for Mary. Good plan, sir.

Sword fight! Sword fight! As Gideon leaves Mary's chambers, Dudley walks up to him and says he no longer need seduce her because he's her lover-boy now. Gideon tells him he's super good at loving her up and getting her every secret as he should know, seeing as how close he was to Elizabeth. Dudley isn't have it and metaphorically pees on Mary, telling Gideon she's his now; back off, buddy!

Mary confides in Catherine about the plan with Gideon, but she'd rather talk about their private life. Mary clams up and won't talk about it though. Catherine can tell she's up to something. She gives her massive stank-eye.

Greer finds out that they are being blackmailed; someone's found out that her sister is going to pass off her baby as her own. She doesn't understand, she's been so careful. She goes to tell Laith and asks for his help.

Bash tells Catherine and Charles that the Red Knights have vanished. Catherine says that even thought they were supposed to be celibate she had let them have their pick of courtesans and it's a possibility there could be an off-spring. Off Bash goes to find out. He talks to the Madam from the time and she denies it, but he sees a woman look all shady when she hears him. She does have a son from one of the knights, she tells him, but she thinks he was a demon-child and left him to die.

Gideon tells Mary that she was right, Joseph Tudor is being hidden by the Archbishop and they were going to kill Elizabeth and then replace Mary with him. Gideon is going to take him to Mary on a ship right away and everything will be set straight. She tells him that she actually has feeling for him, and she's sad. He says he knows he'll never be able to be with her because of his station, but he's happy to be there with her right now, today. Kissy faces happen.

As Gideon is leaving outside, he's stopped and taken by Catholic arms. Mary tells Catherine what's up with Gideon's arrest and Catherine tells her there's only one person she can trust. Dudley goes to Gideon in his cell and he tells him what's up. Their convo goes something like this:  Take Tudor and the documents to our queen, man. No. You have to save the queen. Don't trust you, dude, you are selfish. I'M TRYING TO SAVE A QUEEN'S LIFE. "I'll do it." LOL

Bash finds a wild-haired dirty looking fellow with perfect sparkling white teeth. He's the knight's long-lost kiddo. He tells Bash that he was asked to join the villains that are after Catherine, but he wouldn't join them. They step out of his tent, and for being his noble self, he gets a great big spear in his chest from the villian riding by. We hardly knew ye. Literally. Luckily, Bash captures the villain.

Dudley shocks Elizabeth when he walks in with the news. She skewers her privy council when she informs them of what has happened. This was your plan, you f'n idiots, she tells them, and Dudley is the only reason I am safe. She tells them to show him much gratitude. She will never name a successor unless it is her own child. Let them figure it out after her death. She drops her mic.

Gideon is all, hey baby let's get it on, it's ovah, but Mary says you in danger, boy. Apparently the Vatican still holds him accountable for the Tudor hot mess and they are going to arrest him and have him hanged. She tells him she'll help him when he wants to get his daughter and run off.

Catherine has Bash's knight he captured and is questioning him while he's being tortured by Christophe. That is no torture when one has watched GoT and TWD. Huh. LAME. It's like he's bending his wrist a little. Oh! Acid in his eye! Upgrade! He refuses to talk though, this one's a clam; he falls on Christophe's sword on purpose and expires; skewered clam.

Claude and Leath follow sister and brother-in-law for the exchange, and find out that Greer's sister actually set up the whole blackmail thing to move away from her so she could have the baby for herself and her husband. She feels bad, but she knew Greer could never give the baby up for real. Hell, she wouldn't even let her name it herself. Greer tells her to get out, she'll have this baby and raise it herself.

Catherine offers Mary a prisoner swap when she asks for help with Gideon. Mary isn't happy about it because she wanted Catherine to defy the Vatican instead of sending him back to England. Catherine says she has to leave feelings where they belong and decide. Mary tells her to do it.

Elizabeth reads Catherine's letter about Gideon while she walks with Dudley. She tells him he can just go ahead and die there, he's nothing more than a lady-whore. Dudley tells her he's actually kind of her hero, so she really should save him.

The Archbishop fusses at Catherine about Gideon not being killed, but she tells him not to worry, England is like hell, I mean the food, the weather, *shudder*. She then schools him about using Mary as a pawn, "From where I sit, which is on the French throne, as it's Regent I see the Vatican pushing around female monarchs, and I don't appreciate it one bit. You can go now." Another mic dropped. Boom.

Catherine then does a complete turn-around and all but apologizes to Narcisse. She tells him that she knows he wasn't behind her attack and he's a great lover and defender of France. Will he help her find the Red Knights that threaten her and the Realm? He will.

Well, well, well. that's kind of gross. Catherine is getting ready for bed and Christophe walks in and they talk about hiding the knights body that he killed. She tells him that she noticed his, err, "reaction" when he was torturing the guy. He tells her he was excited to "share" that with her. *hurl* OH, I know! Let's up the hurl-iness! He then says he'll sleep at the foot of her bed to protect her until this is over. She protests, but lies down anyway. He grabs her foot and starts sucking on her toes! Alrighy then!

After a tousle in bed, Claude offers Laith help to raise his station so they can be together. He accepts, but only if he does all the work and she only offers contacts, he won't accept money or gifts. Oh honey, it's much easier to just accept the money. Men. They are so cute together though.

It's time for Mary to say goodbye to Gideon. She tells him she waits for the day when she turns a corner in her Scottish hallway and sees her English ambassador. He says he knows he'll see her again one day.