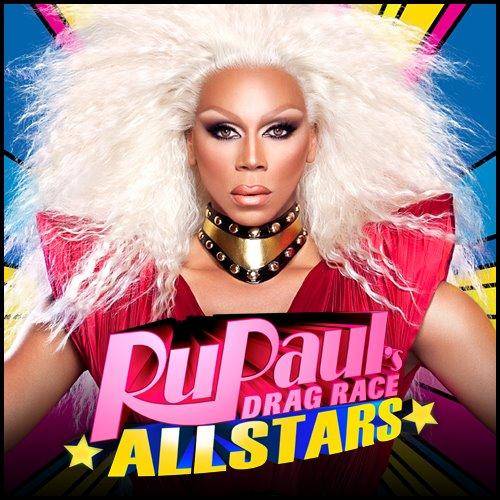 I’m BAAAAAACK! Thanks to TTM for doing to the first two eps of All Stars, the competition is FIERCE, literally!!

Today it is “Herstory of the World”!

We open to Tati’s final message “Thank You!” on the mirror, I was sad that she left too and the girls say it’s great that she has been reintroduced to the world again because she is amazing. Alaska explains she eliminated Tati because her runway wasn’t great which the girls all seem to agree with. The whole elimination power thing is really throwing them for a loop, you can tell.  Phi Phi thinks that you should eliminate based on the judge's critique but I would say there will be a few that eliminate strategically, can’t blame them, it’s a competition after all! Phi Phi asks Katya who she had chosen and it was also Tati, for the same reasons and because Roxxy’s runway was so fierce she couldn’t send her.

Moar manufactured drama with Phi Phi whingeing that Alyssa is just too EXTRA all the time, which she is because she is ALYSSA! “I guess she’s funny sometimes,” says Phi Phi. “SOMEtimes…”

Ru arrives and announces a Lipsynch Extravaganza based on figures from HERStory! Alaska is Eve as is Adam and Eve, Phi Phi is Helen of Troy, Ginger is my fave Catherine the Great, Detox is Marie Antoinette, Alyssa is Annie Oakley,  Roxxxy is Eva Peron, Katya is Lady Di. It’s a group performance so they will have to bring it to stand out.

Looks like they have been given the basics of the costume but they need to embellish theirs. Katya has her work cut out with something that looks like it is meant to be Lady Di’s wedding dress but it’s some sort of ugly satin hell with a HUGE train. Alyssa wants to prove she can be a character other than her own which she was not so great at, Phi Phi reckons that she is hella batshit funny but prolly won’t know how to channel it for the challenge. I'm not so sure...

They meet with the Aussie choreographers and immediately Ginge is a worry as she has a horse prop and is a self-confessed ‘Tony-dancer’, Katya is hating on her because she got the Russian character that f*cks a horse but that would be the wrong choice, Ginge is waaaaay better!  Pheeph tries to psych her out “Girl, your dress is huuuuuge!” oh man, don’t be that girl Pheeph!

Alyssa slays her moves but seeks approval from the wrong person, asking Phi Phi “Was it good? Real good or just good?” and Phi is waving a middle-of-the-road hand saying, “Meh…”. Detox is all over the pace “It looks like you are taking a shit” says the choreographer. “It’s just not funny, we gotta a lot of work to do…”.

Back in the Werk Room they are prepping for the Elimination challenge. Phi Phi is telling everyone about the hate she got during and after her season and the drama with Sharon, turns out she got a lot of flack and Detox was an evil bitch too! Bitch got blocked for a while but Detox was just protecting her friend. Phi Phi says she almost quit because she didn’t feel safe.

RUNWAY! Guest judge is the people’s designer and maker of heavily pigmented lip shiz, Jeremy Scott! Category is “The Future of Drag”. Let’s see how this gets interpreted but first, it the “HERstory of the World” performance!

Personally, I think they all did so well but some people had better parts, let’s see what the judges think!

Phi Phi is a Metropolis robot come to life and she says ‘this represents the Phi Phi of now, a cos-player’. I don't love it but I think she will be safe-ish.

Ginger is trying for the ‘retro space age, Brady Bunch’ look but I’m not sure, the tulle at the back comes off as a bit cheap and badly put together, this isn’t good! Add in that thursty Chaka Kahn hair and she could be bottom...

Detox is AH-mazing! “Sexy fembot toy’” realness, she looks stunning all painted silver with bald head, possible win for the runway as her Marie Antoinette might not be enough.

Alyssa’s outfit is confusing me, she looks like a drag version of Ming the Merciless from Flash Gordon and I don’t dig it, maybe the judges might?

Roxxxy is “Wonder Woman slash goddess of Planet Roxxy and it’s okaaaay, I guess but it doesn’t really GO there for me, it's not extra enough.

Wow, Katya’s hair is everything, not sure about the rest of it but brava on that wig….neck of steel you must have! That dress is just padded in a really confusing way too, like she's pooped herself and collecting it.

ALASKA: They loved her Britney-ised Eve but Michelle wanted her to really GO there with her runway and thinks she fell a bit short.

Phi Phi: Michelle thinks she faded into the background in the performance which I don’t really agree with, her Helen of Troy was really funny. But Carson loves her runway, especially the laser gun and likes that he didn’t just do silver like everyone.

GINGER: Jeremy Scott says she should have her own Broadway show but Michelle is all ‘nah, you faded into the background. Carson doesn’t love her runway, “I need Ritalin to look at you right now,”. Ginger tells them that they whole thing lights up, she just didn’t realise you wouldn’t be able to see it under lights….ruh-roh…

DETOX: Jeremy wants to make a neon Marie Antoinette inspired collection based on her look and Michelle says that they were left gagging with her runway, easily the best I would say. She’s so EMOSH!

ALYSSA: Jeremy could not take her eyes off her Annie Oakley and Carson agreed she was a scene stealer for sure. But Michelle is as confused as I am about her runway, “Is it part Cleopatra, part Saturday night takeaway?” but Todrick and Jeffree are all like ‘it’s FASHUN!”.

ROXXXY: Carson said her Evita was ‘spot on’ but Michelle thought her runway was very plain compared to the others, it’s not Jeffree’s fave either.

KATYA: Jeremy loves that she ‘blew up Princess Leia’s bun’ on the runway but Carson doesn’t love the outfit as she is too covered up. Her Princess Di was a little monotone regardless of her lip synch being en pointe, Michelle wishes she had really poufed up the sleeves which would have given her outfit way more comedy.

RuPaul says that they all slayed so they will be looking at the smaller things in their critiques. Ru declares Detox and Alyssa the Top 2 winning a Palm Springs getaway each! Ooooohhhh, this should be an amazing lipsynch!

Bottom are: Ginger Minj and Katya! Wow, I probably tend to agree with this. Ginger is horrified that she will be in the bottom with her bestie….

Detox takes Katya away as she can see she going through it, she says that in her season she was crippled with fear but feels like she has changed now. Detox wasn’t expecting to have to choose between Katya and Ginger. Phi Phi says it should be Katya as she has had the worst critique.

Alyssa wants to know if she should save Katya is she wins but Katya can’t say that. Alyssa says she feels that there is ‘more to her’ than Ginger. “Do you think falling short in one challenge means you should go?” again Katya has no words and it feels like Alyssa is trying to justify choosing Ginger who was slightly better in this challenge, I no like where this is heading. I mean, I love BOTH of them but isn’t this about how they performed today? I guess you can go whichever way you want when you got dat POWAH!

Alaska wonders if the girls are going to stick with eliminating based on the judge’s critique and Phi Phi says well, Alyssa has been vocal about how she may not. RUH ROH! Ginge is in trouble!

Ginger is telling Alyssa that if we are going to go on critiques, Katya was given critique about BOTH performance and runway whereas Ginger was just runway but she will be ok with however the chips go. Awwww, my Ginge, heart of bloody gold! Alyssa is glad to see the fire in Ginge but she’s conflicted because Katya was just in the top last week, GURL! This is about THIS week, my blood be a bit boily right now….

Ginger and Katya chat too and Katya agrees that she did the worst and Ginge is like “if my dress lights had worked I wouldn’t be in this position,” but Katya says “Nah, it’s still ugly,’ which is TRUF!

Tune is “Tell it To My Heart” Taylor Dane, classic 80’s! Detox starts out strong, she didn’t even need to change, which Alyssa did. Alyssa is kicking and voguing like a champ but Detox is pretty mesmerising, both are TOP synchers, this is going to be tough but the winner is….ALYSSA! Which means that she is sending home…..GINGER! Bloody liar, she says that she chose based on the 'fire she could see in their eyes' which, based on their chat, should have been Katya. This just makes me feel a little bit less of her…

Ginger is fine, I love her so much she has no hard feelings then Ru appears to tell her she can get revenge later and she’s all ‘ohhh baby, I am gonna knock Alyssa outta this comp!” YASSSSS QWEEN!