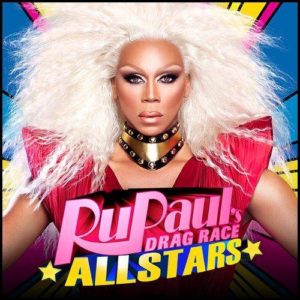 Oh dear, after the heartbreak of losing my perennial fave, glamour toad and all round Southern charmer the Ginger Minj, it's hard to know who to go for now! So many talented queens on RuPaul's Drag Race All Stars! I think I might now be firmly in Lasky's corner tho after Ms. Edwards shadiness, I mean, what she did was not against the rules but it sure left a Bitter Betty taste in my mouth!

"If men can look this good then there's no excuse for ugly women!" AMEN Minj! Just throw some glitter on yo face and WERK! The gals are back in the room and Roxxxy is dark about Alyssa going off-brand and not eliminating Katya. Alyssa addresses it by saying that Katya was way more consistent "I think Katya deserves to be here more and that's just me keeping it real with you guys," she says but no one looks THAT convinced. She's speculating what RuPaul would do but it all sounds a bit fake. Alyssa asks Detox what she thinks and Detox is like, gurl, I based it off the critiques and my decision was Katya. It's a crock, Drag Race has never been about consistency, it's about how well you did in THAT WEEK'S challenge, I've seen some amazing queens go home who were consistent throughout their season. Anyhoo, what Alyssa did wasn't against the 'Rules' per say but it surely has danced up a shit-storm but perhaps that was her MO too?  Poor Katya is struggling now which is the unfairest thing of all!

Minj has left them a letter about 'being proud of your choices' and the hornet's nest is O.P.E.N! Phi Phi is straight in on Alyssa about changing up what they agreed on in terms of elimination but Alyssa is having none of that "Let's choose our words wisely," but Pheef wants to say more words, which she does. Alyssa, to her credit, stands by her decision and mostly I am just feeling bad for Katya, it's not HER fault that she didn't get chosen and we already know how fragile her confidence is. Drop the bone now, gals, drop the bone.

Mama Ru arrives and announces that the maxi-challenge is "Drag Shequels" and it's pairs, so they need to pick a partner: Katya and Detox, Phi Phi and Roxxxy, Alyssa and Alaska. Fuck me, no one can win against Alask-Alys, right? Phi Phi looks less than impressed to get Roxxxy but I guess that's what happens when you are STILL the stirring biatch! However, they get the BEST parody to do: ShowSquirrels aka Showgirls.  Velma and Weezy is Katya and Detox so that leaves Alyssa and Alaska with Whatever happened to Baby JJ?

Phi Phi is feeling the pressure as she hasn't won yet and she wants to swap roles with Roxxxy which is risky but she feels like she has a lot to prove if 'consistency' is key. Alyssa and Alaska are hamming it up just fine whilst Katya and Detox practice their best Southern accents. This is gonna  be FUN.

Michele and Todrick are directing the shequels and first up it's Katya and Detox as zombie Velma and Weezy. Katya is nervous, flubbing a few lines and she is so much in her head, Todrick wants her to have fun with it and Katya is "I just keep thinking what Amy Sedaris would do?" and I'm thinking...."Ahhh, she'd be funny!" This is no bueno despite Detox's best efforts, here's hoping the final cut is better.

Alyssa isn't loud enough and she is letting Alaska take centre stage which feels a bit...off? Is she deliberately sitting back as a strategy? Because we all know she loves that limelight! She's a trainwreck...

Phi Phi and Roxxxy look the part and are getting a few giggles but Phi Phi is getting her lines all wrong and Todrick wants more character out of Roxxxy, less actual Roxxxy. Ok, this could be more of a trainwreck than the others!

Guest judge is professional Pussycat Doll and banger of racecar drivers, Nicole Scherzinger! Ru looks amaze as usual but what I really want is dat HERR!! So Old School Glamazon!

RUNWAY: theme appears to be "Start with one outfit, end with another" RuVeal ala Cincherella in the Season that Ginger Minj should have won 😉

Phi Phi O'Hara:  could have done better, I like how the yellow dress came out of the blue one but it could have done with a better theme. I mean, was she Alice in Wonderland and then Nicole Kidman ala 1997 Golden Globes? It made no sense..

Roxxxy Andrews: you know, I kinda like the flamenco to disco diva reveal and I like how it was all linked up at her wrists which made it seamless but it wasn't very WOW.

Katya: hits a bit of a snag when her dress almost doesn't come down but then it does and she rips off her bangs and there's a PENTACLE and she smiles and it's ZOMBIE teeth! Yes, I am down with this and Ru is "Not tonight, Satan, not tonight,"

Detox: starts as Elvira and ends up as some sort of Chinese witch queen who rips off her skirt. It's oh-kay but, really, last weeks amazing effort is gonna be hard to top. On a side note, does she have butt implants? Chica got BACK! Kung POW indeed!

Alyssa: comes out in the 'Lacroix-poufe' but no, it's a dress made of cameras! Which is amazing but I also cannot help but think she looks a bit like a Dalek? Impressive nonetheless.

Alaska: is the weeping willow widow but then, NO, she is actually Little Poundcake her puppet from her season. It's a fabulous theme even though the execution of it was simple, take notes, kiddos.

Next up it's the performances in the shequels and first it's "ShowSquirrels" which stars my very fave NOLA bounce queen, Big Freedia!! "F-f-f-five minutes till showtime!" Phi Phi is hamming it up nicely, she is emoting all over the place but Roxxy just seems a bit flat although she delivers the best line "You're just a tired-ass showgirl, go back to obscurity where you came from!". Hang on, didn't they switch roles? I am so confusemented...

"Velma and Weezy" is next with Katya and Detox as the zombie version of them after flying off a cliff. Make up is en pointe and I'm happy neither flubbed their lines but it's not that funny. Perhaps that's more script than anything else.

Lasky and Alyssa star in "Wha' ha'happened to Baby JJ?" which I have ridiculously high hopes for, the gals don't disappoint and there's an extra guest star, Porkchop! Both are suitably camp and over the top, these roles were made for them and I think they have this in the bag. Ruh roh...

PHI PHI: Carson was a bit meh on her runway but likes the conversion the most, "If this doesn't work out for you then you can work for NASA!". Michelle was SO proud of her performance, she embodied the character of Mama Versayce and Pheeph is overly emosh, can't speak.

ROXXY: Nicole adores her runway, she wants to borrow! Michelle says that she had to work way harder because Phi Phi was so good and it was a bit more forced. Todrick agreed saying that Baby Versayce should have been the one stealing the show but she didn't.

KATYA: Carson didn't think that the looks were not vastly different but loved that the looks told a funny story. Michelle and Todrick agreed that Katya was in her own head a lot but after they talked to her about that, her scene with Detox was one of their faves.

DETOX: Todrick and Carson agreed that she was 100% committed to the performance and being collaborative with Katya but he wasn't crazy about her 'Peking Tuck' look.

ALYSSA: Michelle's biggest problem was her enunciation, chica could be heard and she was on the floor mostly! Carson didn't care about that but it was just ok. Todrick didn't think it was a great reveal but it was funny. Michelle doesn't want to give her a pass just because she is mostly funny and I agree, she coasted today.

ALASKA: Coming out as Little Poundcake was brilliant, "It was the right time to do it," says Michelle. Nicole calls her the Dustin Hoffman of drag queen actors and Michelle reckons she was 'born to play Bette Davis'.

The winner is...............PHI PHI AND ALASKA are the top two, whoah MAMA, this is gonna be an epic lipsync. Detox is safe but the rest of the girls are bottom and these are the girls that need to be looked at for elimination. Is revenge gonna be sweet for Pheeph??

Back in the Illusions Lounge the discussion is all about who got the lowest critiques and Alyssa is quick sticks to defend her runway despite her performance being poor, she doesn't feel she should go home based on ONE challenge when Roxxy and Katya have both been in the bottom twice. OOH KNOW YOU DIDent! WTF, you cannot impose your judging reasoning on the others. Phi Phi isn't going to do one on ones as she doesn't feel she needs to but Lasky does. Katya pleads her case first and basically falls on her sword with the judge's critiques but thinks her overall runway was a lot of fun, Lasky has poker-face supreme. Alyssa comes out with the emosh big guns like 'as your partner I don't want you to feel like I have let you down,' she fell short, Lasky wants to know if not her then who and Alyssa doesn't care, she is all about her and points out all the great things she has previously done. Roxxy basically says that Katya should go as she has been in the bottom twice too and Lasky is like 'can I borrow that top of yours?'...so odd.

Detox's bee in her bonnet is about Phi Phi not talking to everyone "It's a little bitchy, if I'm honest," but Pheeph doesn't want everyone in her face begging her to let them stay. I get it, but it's a bold move.LIP SYNCH!

LIP SYNCH! Who gonna win and who will they send? If it's Lasky then I reckon she will send Roxxy but Phi Phi will send Alyssa. "Got to Be Real' is the disco classic and I can't cal it, both are hilariously en pointe. Lasky is OTT funny whilst Phi Phi is all snakey chanteuse. THE WINNER IS....ALASKA!!! Who she gonna send home?? EEEEEEEEK!

Ermagerd, I was not expecting that AT ALL. Alaska is beside herself and they hug but I cannot help but wonder how this will all pan out behind the scenes when REVENGE is on the cards? Dun, dun, DUUUUNNNN!

She out with a tongue click pronouncing, "Winning isn't everything and I am just lucky to have been here," oh yeah, it's all Southern grace till...THE MIRROR! The remaining queens come back and read Alyssa's message, "It's not personell, it's drag! PS: log of". Phi Phi also chose Alyssa because she was also sick of people saying "you can say or wear whatever because you are Alyssa", it wasn't fair that the judges let it slide.

THE MIRROR reveals the eliminated queens! WTF? Oh, this done gonna get good, lawd! Till next week, when TTM takes the reign again! xoxo BM