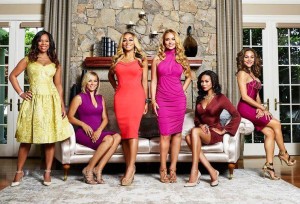 My cable is back and so is our regular recap! Woohoo! So, what happened on the Real Housewives of Potomac this week?

We start with Katie meeting the editor / journalist / photographer (his job is never explained) of Washington Life magazine and reminiscing about her days as a glamorous cover model. She does look gorgeous in those throwback shots, no doubt about that! Katie may have started modeling in her 20’s but she has been a socialite since she was in diapers, which is starting late if you ask the RHNY ladies. And Katie ain’t lying, her family is some old money. Like, prohibition old. Her father’s family were bootleggers while her mom’s side founded black colleges and universities. Color me impressed! To be perfectly honest I thought Katie was making the whole thing up.

We also learn more about the Rost Foundation, which collects money from generous benefactors and then distributes said money out to different charities. Hmmmm. I am no business major and it takes me a good 15 minutes to figure out what change to give the cashier, but even I can see that her foundation is a little, well a lot, sneaky. Donate 5 million to her charity and after a small disbursement fee she will spread the wealth around the charity world. Oh, did I mention that her disbursement fee is 10% of your donation? Actually, this sounds like a pretty good way to knock out some of my student loans.

Next, Grand Dame Karen and Gizelle meet for a chat in one of those fake Parisian bakeries that seem to be on every corner here in Houston. There is no reason to have a La Madeleine, Sweet Paris, and Ooh La La form a temptation triangle around my office building, keep your chocolate croissants away! It is here that we are introduced to a new, and I think my favorite, etiquette rule. Etiquette Rule #47: beef must be squashed immediately, or put on the grill. Which is the reason for our sweet meet today. GD Karen thankfully didn't think the apology went well, so called Gizelle up for a redo. Thank the heavens there is an ounce of rationality in that woman and she is not all sneers and etiquette rules. GD Karen is full of wisdom as she tells Gizelle that confronting both GD Karen and Charisse at the same time was an AWFUL idea and I agree 100%. No need to drag some beef onto your neighbors grill, especially when your neighbor Charisse loves to fire it up and have all her friends over for a roast.

GD Karen gives my favorite housewives non-apology; "if my etiquette rules offended you, I apologize", but I don't apologize for giving them to you or for the tacky mirror frame. Beef squashed and all are friends again!

Ashley Darby and Katie decided to whoop it up on a double date with their fellas and I kind of think that Ashley Darby and Mr. Ashley Darby are swingers? I can’t explain, I just get that vibe ya know? Ashley Darby is on this shitshow because she thinks the Potomoc woman can help her climb the social ladder and wants to use and abuse the women until she is on top. I kinda like Ashley Darby! 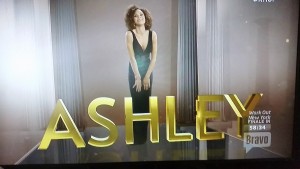 Ashley Darby also prefers to drink whiskey and invites Katie to an Ashley Darby whiskey tasting party. These women can barely behave themselves while drinking a crisp white, how in the hell are they going to keep from killing each other while downing the devils juice? Another reason I like Ashley Darby is because she cyberstalked her Aussie hottie over the security cameras at work before making her move. Who cares if he was her boss before he was her first husband? Certainly not me.

Suddenly it’s morning and we are waking up in bed with Robyn and the not husband, Juan. Since Juan can’t catch a hint and move out, Robyn muses that she wants the relationship to work but still has her guard up. I’ll be honest, for a divorced couple living in the same house and sleeping in the same bed, Robyn and Juan are as boring as the sex they’re probably having.

Time for prom! Grand Dame Karen’s daughter Rayvin is getting ready for prom and she is just so adorable. Well spoken, chatty, excited to be able to finally step foot inside her mothers bedroom and not shunned into the kitchen from hell. Her date arrives and he is equally as adorable and *gasp* white! Interracial dating is allowed in Potomac, you see.

Next, Robyn takes her wedding dress to get appraised and I took a train straight to Powernapville. Would anyone care if I just started leaving Robyn out of recaps entirely? Would you even know she was gone?

Later, during a shopping trip where GD Karen made Katie and Ashley Darby try on swimsuits for her daughter, GDK educates Ashley on the ways of Potomac social climbing. You see, the Potomac women have earned respect and their position in the circle. They have kicked bitches down stairs and drank entire martini bars full of Exlax to get where they are. Luckily, GD Karen is fond of Ashley Darby (for this episode) and will support her first ever Ashley Darby Whiskey Tasting. Lucky for all of us because I cannot wait to see what GD Karen’s schwastey face looks like.

Finally we move onto the main events of our evening, a magazine gala and the first ever Ashley Darby Whiskey Tasting. Or, Katie harasses her boyfriend for a ring while the other ladies slosh back whiskey in a basement bar.

It wouldn’t be an episode of Real Housewives if someone didn’t wear their lingerie as regular clothes and this week our offender is Grand Dame  Karen herself. You might remember Gizelle’s Victoria Secret bridal selection corset from last week and while GD Karen’s Fredricks of Hollywood Valentines collection is no VS corset, it definitely does not disappoint.

What does disappoint is the venue for the first ever Ashley Darby Whiskey Tasting. Don’t get me wrong, that bar looks hip and fun and right up my alley. What doesn’t look fun is trying to have a private Ashley Darby Whiskey tasting in the middle of a packed, loud bar. Were there no private rooms available in Potomac? How am I supposed to hear what Charisse is screaming at Gizelle over the din of hapless adults spending their meager paychecks on beer? Ashley Darby might like to throw parties but she needs to step up her game if she wants these high society snotheads to take her seriously.

Now, bring on the whiskey! These whiskey faces are just too hilarious and some of them hit a little too close to home. I got a migraine just watching these women pound back fancy Jack Daniels. Also giving me a migraine is Gizelle bringing up her disaster of an apology date with Charisse. Come on, girl! I was liking you this episode and you had to go and make a good whiskey party all about Charisse. Thankfully, the drama doesn’t last long. Especially after Ashley Darby calls Gizelle out for calling her a THOT last week and the two mend their broken fence in record time. Watching Ashley Darby, a 26 year old child, forgive and forget so easily made Charisse feel like a real asshole so she sucks it up and hugs Gizelle to save face. 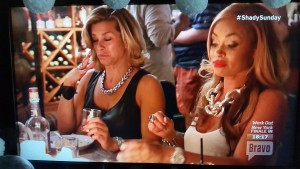 So what was Katie doing during the first ever Ashley Darby Whiskey Tasting? Making passive aggressive jabs at her boyfriend Andrew in front of fellow fancy people at a magazine gala. Nothing makes people want to donate to your non-charity like getting courtside tickets to you busting some balls over an engagement ring.

Y’all, I’ve got some strong feelings about this. If you have to give your partner an ultimatum, marry me or lose me, then you didn’t really love them in the first place. Now, my mom did the same thing to my dad after seven years of dating and they are happily married for going on 26 years, so obviously I’m not talking about having a “shit or get off the pot” long term relationship talk. I’m talking about fresh on the dating boat and you can easily, without a second thought, say to your partner, “If you don’t marry me, I am going to leave you for someone who will”. That’s not love and that is not what marriage is about. Nothing irritates me more than watching a woman verbally abuse her boyfriend because he hasn’t shelled out for a 10 carat stunner after one year of dating and that is exactly what Katie is doing to Andrew on national TV. Even more frustrating is the man who sits there and takes it. No! Love is beautiful and amazing and warm and so, so nice! Love does not berate you, love does not constantly remind you that if you don’t propose soon then they will find someone who will, and love doesn’t threaten you when it doesn’t get its way. Your love for your partner should be something you can’t live without, not a tool in your nasty, manipulative games. To his credit, Andrew flat out tells Katie that if she weren't obsessively mentioning the word "fiance" every 30 seconds he would have already proposed. I like that her threats to get knocked up and force him to an engagement are pushing him away.

Take my relationship with Our Savior Andy Cohen, for example. Sometimes I love him and sometimes I can’t stand the site of his giant, bronzed, spray tanned forehead. But I would never, ever threaten to leave him for Kris Jenner, no matter how many times she shows me Kim ugly crying. 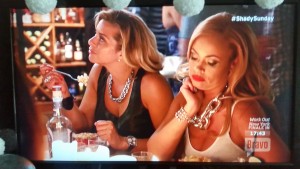 5 thoughts on “The Real Housewives of Potomac S1E3: What a Little Whiskey Can Do”