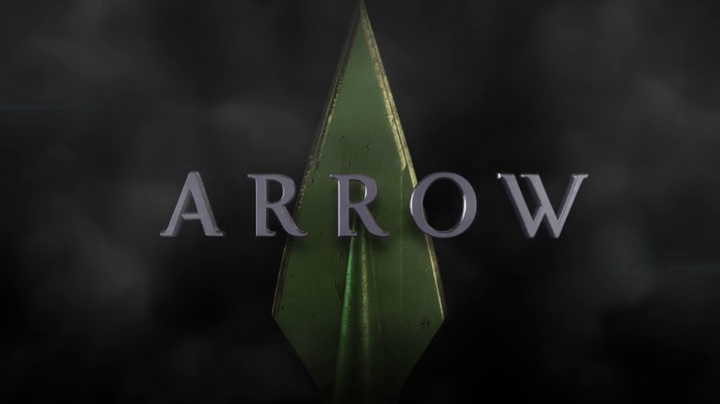 It's the penultimate episode of Arrow Season 4!

Oliver and Diggle have found Damien Darhk in his underground lair, and he's just finished sucking up all the death energy from the nuclear explosion at Havenrock. He is now beyond death, Oliver's arrows and Diggle's bullets just disintegrate when they get close to him. Darhk tells them that he's going to slowly pull the oxygen from their body molecule by molecule, but he's not going to kill them. He wants them to feel their skin melt when nuclear Armageddon hits. Now, please excuse him as he goes to get his plans back on track.

Thea is in Tevat Noah (finally worked out what the underground land is called) and is mourning the death of her boyfriend Alex. Her dad, Malcolm, arrives and has his guards take her captive. Lonnie Machin has disappeared and Malcolm thinks Thea is covering for him. Daddy says she needs a time out!

Felicity is at her place, and her dad Noah is  still hiding out. Curtis arrives (Yay! It's been too long!), and is blown out by the fact that Felicity's dad is the best, and most wanted, hacker in the world. Felicity fills him in on Rubicon, and the fact that their temporary fix will only hold for less than 24 hours. Time to get to work!

Damien Darhk and his wife Ruve are at Genesis headquarters, and have enlisted Felicity's hacker ex-boyfriend Cooper Seldon (Nolan Funk) to help them get control of the the nukes back. Lonnie Machin is still on the loose in Tevat Noah, and Ruve promises Damien that she'll take care of him.

Thea has managed to get a message to the Arrow bunker letting them know that HIVE has her, they still don't know exactly where but Felicity is working on it tracking the signal. She gets a location, and Oliver and Diggle head out to find her.

Malcolm has Thea tied to a chair in the house in Tevat Noah, and he tells her that he can't have an anomaly loose. He warns her not to make him do something to keep her under control.

Oliver and Diggle are on a deserted corner, no buildings, nothing. There is sewer access that shouldn't be there though and they drop down and head for the tunnel. They open a door and step out into the serene neighbourhood that is Tevat Noah. Felicity loses their signal, but before she can work on it she gets an SOS message from Curtis.

In Tevat Noah, Ruve gets a message that there are two intruders. She sets Malcolm onto them, seeing as they are coming for his daughter, it is now his problem.

At Felicity's, Curtis is kicking back with a beer when she arrives demanding to know what is the emergency. It's not nuclear Armageddon just yet though; just parental Armageddon. Looks like Donna Smoak has discovered that Noah Kuttler is in town. Donna hasn't been able to contact Felicity, and now she finds Noah here? Felicity sits her down and tells her that she's working for the Green Arrow, and she needs Noah's help. Donna is very upset that this is the first she's heard of it, and tells Felicity that she's more like her father than she thought.

On Tevat Noah, Oliver and Diggle are making their way through the streets, and decide to split up to find Thea. Every home they pass is filled with happy families, all creepily clad in matching grey outfits. Oliver comes across Alex's body, and heads inside. Thea is still in there, but she's been yellow pilled and pulls a gun on Oliver. She reports the intruder and tells him that if he moves, she'll kill him. Oliver tries to talk her down, but Malcolm appears and he finds himself surrounded. Diggle rocks up just in time and starts taking out Ghosts. Thea shoots her way out, and runs.

Oliver and Diggle make a run for it too, being shot at all the way by Ghosts. They hole up in a house that seems deserted, without being seen. The house is occupied though, and it's a family who is here by choice. They believe in Genesis wholeheartedly and haven't been drugged. An alert from Ruve comes over all the screens in Tevat Noah, everyone needs to be on the lookout for the intruders, and if they find them they need to kill them.

Curtis has come up with an idea to brick Rubicon, as you would with a smart phone by making too many access requests with the wrong credentials. Noah is doubtful that it would be left open, but Felicity encourages Curtis to give it a crack. Donna tells Noah to stop being such a stick in the mud which leads to another argument and Noah blurting out that he never had any choice in the matter of abandoning his family. What the? Donna has always told Felicity that her father walked out?

Meanwhile, Cooper Seldon has managed to take over Team Arrow's computers by sending an electrical surge, and locking them out. Cooper opens up a line of communication, and gloats, while sparks fly around Felicity's apartment. They are able to ping the signal back, and go to work at turning this all around back onto Cooper.

At Genesis, Cooper is all smug with Darhk watching over his shoulder, until an explosion rocks the room. They've managed to turn it back on him, and Cooper is blasted out of his chair. Darhk is furious, Rubicon is offline. Curtis's crazy plan worked! Noah and Felicity have a moment, which Donna witnesses, and she leaves the room upset.

Felicity follows her upstairs, and asks what is going on. What did Noah mean when he said he didn't have a choice about their family split? Donna admits that it was she and Felicity that did the leaving, she couldn't let Felicity live her life with a lying, wanted criminal as her father. Felicity understands, and tells Donna that she will never lose her.

Thea arrives at the house and starts shooting arrows at Oliver, while Diggle holds off Malcolm and his Ghosts at the front of the house. Oliver tells her that she is strong enough to fight this, and the Thea he knows never gives up. After an short internal struggle, she fights off the effects of the drug, and she and Ollie arrive just in time to stop Malcolm from hurting Diggle.

On the screen of Tevat Noah, a new communique is received. It's Lonnie Machin, and he's managed to take Ruve and her daughter Nora hostage. He gives Darhk a warning 20 minutes and he kills someone. 21 minutes and he blows Tevat Noah into next week. Malcolm tells Oliver, Diggle, and Thea that they all need to work together to stop Lonnie, he's already tried to kill everyone once. Oliver agrees that no one else should die over this. If they fail to stop him, they'll have to rely on Malcolm to lead everyone to an exit. Malcolm tells him he's a fool, there's no where else to go if the nukes go off. But Oliver still has hope.

Lonnie is waiting for Darhk, and getting very impatient. Ruve warns him that he has no idea what he is going up against, and he's planning to destroy the last safe place left. Their conversation is interrupted by Oliver and Thea, but Lonnie warns them that a stray arrow could blow the whole place. Sure enough, Lonnie deflects another arrow and it hits a cannister of gas which starts to smoke. He retrieves the arrow, and stabs Ruve through the heart. They all attack him as explosions start to rock the streets of Tevat Noah. Malcolm shows his cold, black heart still beats a little as he begins to help everyone evacuate.

Lonnie brings out the nun-chucks and fights them off. The ceilings start to cave in, and Oliver protects Nora from the rubble. Lonnie manages to escape, and the others decide they have to get out. Oliver goes to see if Ruve can be saved, but she is almost gone and covered in rubble. She begs him to save her daughter, and Oliver assures her that he will, and she dies. Diggle carries Nora out, and they barely make it out before the whole structure collapses.

Damien Darhk gets the bad news about Tevat Nova, as explosions start to reach the surface of Star City. Oliver and the others are on the surface, and take in the sight of the big crater where City Hall once stood.

Damien Darhk is surveying his headquarters, all the screens are now dark and showing an error message. Malcolm arrives and delivers the news that it was Lonnie, and Darhk asks about Ruve. Malcolm tells him he's sorry, and they are also not sure where Nora is. Darhk assures him that Rubicon is only offline temporarily, he knows someone who can get it back online. Malcolm tells him Tevat Noah has been destroyed, the plan can no longer work. There's no place left on Earth that is safe if Rubicon is reactivated. Darhk is beyond caring.

Donna has a chat with Noah Kuttler, and convinces him that it would be best for Felicity if he just left without saying goodbye. And never come back. Noah reluctantly agrees that he will probably never really change, and he is a wanted man again.

Inside Felicity fills Curtis in on her family dramas, and he can see the similarities between her and Oliver and Donna and Noah. Just saying. Then a surprise visitor arrives, it's Damien Darhk and he wants their help. Felicity tells him to go to Hell.

Well, we're all set up for a big bang of a finale next episode. As much as I admire the evil that is Damien Darhk, I have had just about enough of these shenanigans for one season. We've had nothing but death, injury and heartbreak this season. We need to go out on a high note, please. Oh, and one more request, more Echo Kellum as Curtis Holt, please and thank you.