It's so weird watching people hang out in tiny spaces on Below Deck Sailing Yacht, isn't it? I can't stop flinching! I'm not crazy about the direction the Blame Bus is veering in right now, but at least we've got a budding threeway to look forward to, right? Wooo! Rolling into BDSY S1:E10 Big Deck Energy after the break!

We're not on charter right now on Below Deck Sailing Yacht, but before we go on a wild and crazy day off, Captain Glenn Shephard wants to talk to second steward Madison Stalker. Chief steward Jenna MacGillivray has been complaining about Madison's attitude, the captain wants to find out if Madison needs to be replaced.

Like. What? If they fire Madison I will motherhumping RIOT!! She's our Kate Chastain of this season, she's giving us all the soundbites and the funny! RIOT.

Jenna lays it out for Madison, part of what Jenna is using for evidence is the note that Madison wrote for deckhand Parker McCown in the middle of the night and the continental breakfast she left him. Jenna is extrapolating that to Madison never getting any sleep and she suggests that could be the reason Madison is tired all the time. Madison defends herself. Bravo, CameraGuy... finding that one time Madison was literally laying around.

Captain Glenn doesn't pull any punches, he tells Madison her performance is clearly lacking and she needs to focus on getting more sleep. Madison is shocked and speechless, the very first time I can remember seeing that. Jenna follows that up with a comment about the talkback she's getting from Madison, who rallies to say that Jenna asks for things in a bitchy way.

Bitchy was not the right word to use there, Captain Glenn is not that kind of guy. It is ACCURATE, however, how about when Madison tried to talk to Jenna and her boss just ignored her then talked over top of her? How about that? Or all the other times she was just a bad boss?

Captain Glenn asks Madison if she can see any changes she might need to make, he's old skool and believes in following the hierarchy. I mean, being on boats is definitely that type of industry. He puts Madison on warning.

First mate Paget Berry flirts with third steward Georgia Grobler in the galley before everyone heads in to get pizza. Man, Parker is cute but he's a total doofus, nagging Madison in front of everyone to tell him what's wrong, over and over. Honestly, Parker, stfu! Captain Glenn is right there!

He takes Madison off the boat to yell all the wrong types of encouragement at her. I get that he's being supportive but she's just been put on notice. If she doesn't do some deep digging to figure out how to turn this around, she's at risk of losing her job and nobody wants to be fired asea.

Madison and Georgia are so excited to party off the boat tomorrow! Everyone is! It's going to be a blast! Except that Parker is whining because ohmigod, Madison liiiiiikes him and he wants to be friiiiieends and what's he going to doooooo? Georgia and I: it's not a big deal, stahp. "These are conversations people have."

Nobody TELLS you they have a crush on you, by definition it's passive and unspoken! Otherwise, it's making a move! Duh! So, maybe mention you want to get back with your ex and it's looking good?

It's the next day and everyone is ready to goooo. The whole interior staff is in bikinis, chef Adam Glick is ready to spend some quality alone time with Jenna. I just hope she doesn't spend the whole time pressuring him for the D, no way would that fly in any kind of reverse scenario.

Paget joins Madison and Georgia out on deck, trying to fade his screaming white belly, he really likes Georgia's singing. He listens to her play guitar and sing instead of smearing tanning oil on his girlfriend of four years, deckhand Ciara Duggan.

Jenna cannot dance. Jenna is convinced that Parker is still attached to his mother via nursing, so they take a picture or video together with her pretending to breastfeed him.

She's not laughing WITH you.

Lookit where they're going partying?? 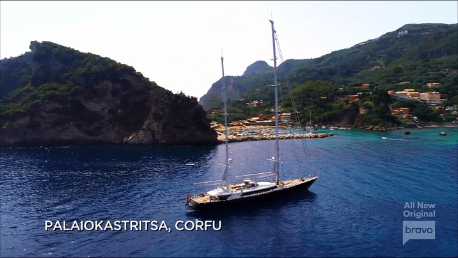 The crew heads to a private beach club area to drink some more. Madison, Georgia, and Ciara are having a blast. Ciara's flirting with Georgia a little, earlier Paget said he wasn't opposed to two at the same time, so...

Adam and Jenna are all over each other in the pool, they break away to go paddle boarding and make out, separately telling us how much they're freaked out. Jenna cries happy tears.

Time for dinner! Everyone separates to dress, the boys are all ready long before the girls, of course. Supper is slowed down by Parker wanting to give a speech, he even takes the server aside to ask them to make sure nobody interrupts. For the love of.

It's a letter from his mom, he's missing his parents terribly. It's essentially 134 of those inspirational quotes stacked one on top of the other.

An even more awkward conversation ensues with huge gossip Byron asking if Adam and Jenna will be shagging any time soon. Ciara suggests they just use the master suite to get "stickier."

That's right, they just sit around and discuss whether and where their fellow crewmembers should be/are banging. Byron has some suggestions!

I think the last one's his favourite!

Adam and Jenna head out early and head to the master bedroom back on the Parsifal III.

Things are getting messy at the beach party, Ciara and Georgia are about to make some uncomfortable-tomorrow choices.

The crew laughs all the way back to the yacht, hey, Byron stole my joke! When I was young and single and drunk, I used to say: "I'll get in the backseat, I like it in the rear." Awwww, just like his ex-girlfriend!

They wake up Captain Glenn so he can drink some Don Julio from a flask with them, such a positive night for everyone!

Parker and Byron get superdrunkserious in the hot tub, Madison is exactly that bored.

Georgia wanders around in a Baywatch swimsuit and a man's shirt, is she...filming a music video? She's looking for Ciara and Paget, who have crashed HARD.

Adam and Jenna sealed the deal, they had a good time? I care.

Whatever, they're on a reality show and made choices on TV and it would be easy to judge but really: who are we? We're Bravo viewers, that's who, WOOOOOO!

Paget and Ciara are completely normal in the morning; no hint of all the innuendo and boob-sucking of the night before. Georgia is trying to figure out what the hell.

Jenna plays guitar and sings, she's actually really good! That was a surprise, is this some kind of Von Trapp Singers boat?? Adam loves it.

We've got a new charter coming, so that means it's time for the Pre-Charter Preference Sheet Meeting! Captain Glenn introduces us to Primary Charter Guests Maisa Kehl and Chuck Heath from Salt Lake City. Primary Maisa is a Brazilian model who scouts for Playboy Slovakia...there's a Playboy Slovakia? It's Maisa's birthday on charter, they're bringing friends Steve and Sue Demarest along with a couple of others. Pretty standard looking charter requests so far, no weird air-food requests yet!

Jenna takes her staff aside for a pep talk,and then Madison aside specifically to cheer her up, this is going to be great! Madison bears down, her dad raised her to be a strong and fearless woman.

Boat tour! While the crew drags in bag after bag in the hot Corfu midday sun, the guests relax with chilled champagne and white wine.

Parker messes up the chain of command again, asking Captain Glenn if he can spray the hot teak deck now or wait? He does not ask Paget, his actual boss, standing three feet away, he radios to THE CAPTAIN, who tells him to ask Paget. Did I mention that Parker already told the guests he would be spraying the deck?

The guests take selfies on the deck while Jenna calls Madison down to the cabins to replace the half toilet-paper roll with a fresh one.

Georgia's found a picture that makes her gasp, it's her ex-boyfriend at Universal Studios with Jenna. That's...unlikely, isn't it? One from Canada, one from South Africa?

Captain Glenn anchors the boat, the guests take selfies and jump off the side of the boat using a rope swing.

Georgia asks Jenna about her ex Johan, he's also Jenna's ex! Jenna should probably not have said "best d**k ever though, right?" Not on camera, not feet away from what can only be the 'second-best' d**k ever, or freshest, anyway?

Parker asks Madison for a team meeting, he loves her, as a friend. She's mortified.

Georgia tells us about her relationship with Johan, it was significant but she treats people like shit. And he let her. Huh. That was...surprisingly honest.

Adam walks in while Jenna and Georgia are discussing how cool and fun Johan was, he's immediately pissed and threatens that Jenna better not f*** up her chances with this cool and fun guy.

He gets madder and madder as Jenna tells Byron and other crew but I don't care because we're sailing!!!

The guests all come up on deck to stare at the beautiful sails, I forgive them everything (they haven't actually done anything bad yet, so it's a Get Out Of Jail Free card) for their open-mouthed wonder at this gorgeous boat. Except for the one with her nose in her phone that hasn't looked past it once.

Georgia and Jenna joking around in the crew mess pushes Adam over the edge. He's almost vibrating he's so offended, which he tells Georgia and then tells her to stop laughing over and over. He's furious and we're out. He didn't even HEAR the "best d**k ever" part! This reunion is going to be ugly.

Jenna: we haven't always seen eye to eye, but you need to GTFAway from disguy. None of that reaction is alright, it speaks to something much scarier.

OR is that a normal reaction to the person you just physically connected with talking fondly about an ex? Nah, that really feels like a giant scarlet flag slapping Jenna in the face.

Until next time, when we figure that out! Cheers.