Welcome back to Parker Is A Problem Asea, aka Below Deck Sailing Yacht whereupon our young, green deckhand Parker McCown's job is on the line for attitude and generally having too much confidence in his own opinions. Can you have too much faith in your own opinions? You can if you're asea in a HIERARCHY, PARKER. Let's find out what happens in BDSY S1:E12 after the break!!

We open where we closed, in a meeting between Captain Glenn Shephard, first mate Paget Berry and the aforementioned deckhand Parker Berry. It's not going well for Parker, especially since he was such a "sassypants" this last charter in front of the "guests."

Paget and Captain Glenn would really like to help Parker be successful (I don't believe that of Paget), but Parker's about to take matters in his own hands. He threatens to quit, framing it as some kind of a gameshow situation where he takes he money he's made and skips out before things get really ugly.

Parker. Things are already really ugly. Captain Shephard is still trying to be, you know, a boss, so he's trying to keep the conversation going but he's totally rolling his eyes with me.

Parker contemplates his lot while the women on the boat say eff the dramz, we're going to go lay out in the sun! Second steward Madison Stalker (she's my fave, but shhh, I am supposed to like or dislike them all equally) and third steward Georgia Grobler don bikinis with deckhand Ciara Duggan, of whom I have a question.

Ciara: you are a redhead like moi. I would sooner suffer some type of low-stakes mutilation than lay out in the sun and gather a sunburn/more freckles. Whhhyyyyy are you out there??

You can really tell Bravo has relaxed a lot of its regulations about how much skin they show, we see Georgia cleaning the table in the crew mess with her entire arse out. I assume there's some sort of a thong in place, but you can't see it from the angle they filmed.

Chief steward Jenna MacGillivray is cuddled up in bed with chef Adam Glick, every single person on this boat is talking about the Parker Situation right now, including Captain Glenn with Paget and chief engineer Byron Hissel.

Madison is Parker's best friend on the Parsifal III, she's dismayed that he's at risk for losing his job. Georgia is also friendly with Parker, those two are pretty much it. Georgia is also very, very friendly with Paget, who has been dating Ciara for four years. That alllllmost came to a threeway a little while ago, looks like Georgia's still keeping her options open for a direct move on Paget. Not that she's crossed any lines, nor has he. I think she got to second base with Ciara, though!

Parker has chosen to resign to protect his wellbeing.

Parker tells Paget, who pretends to be sad then Parker does a goodbye tour and everyone celebrates. Everyone but Madison.

Parker clarifies for us; he didn't quit. He resigned. You know what, Parker? Just...go. Gbye.

It always comes down to a partner, doesn't it? When Abby Murphy left her deckhand job on Below Deck Mediterranean, it was to meet up with her brand-new fiance and I think it's no different here. Parker can't wait to see his ex-girlfriend Kaiti, who has reached out again. Best luck, Parker!

Georgia continues to ply her laundry-room seduction tactics on Paget.

You should never joke about tips, some people just...take it wrong.

It's a night out for the crew! Wooo, everyone looks great! Everyone shittalks Parker, which irritates Madison, his sole ally. Jenna explains: every junior person just needs to STFU, all the time.

After dinner, the two couples head back to the boat for cuddles; Madison and Georgia hit the streets looking to go dancing. They stay out until 3 am, Jenna and Adam move their sweatpants to the Master Guest room.

It's 8:00 am on our Charter Day Eve! Let's find out who's coming! First let's see who's coming for the deck crew, hai Christopher Miller from England! You're a cute little bear, arencha?? Arencha??

Okay, he's actually not bear-ish at all, maybe it was just the picture on his resume. The crew stalks his social media, he looks a little Chris Hemsworth-ish in some but Instagram is basically a funhouse mirror.

I love that Byron suggest gently to Jenna that she not make any more breastfeeding jokes to this new guy, hahahaha right? She orders him to get to work, but maybe she actually heard what he was saying. Parker did not appreciate that and it was straight-up garbage to say to a coworker, even if you clearly think he's beneath you.

He's got longer hair than I expected and very very red, wet lips. Madison says he's not her type.

We're all waiting for Georgia to meet Chris, but he's busy with Paget up on deck showing off how much he knows about sailing. Paget is so, so relieved.

Preference Sheet Meeting woooo! The Primary Charter Guest on our next charter is Lyndi Kennedy, we already knew she was a lifestyle blogger because of how she spells her name, right? We've also got her boyfriend Jesse Thompkins and friends Missy Ulmer, Jonathan Pettibone, Evelyne Marks and Cathy Cordas.

Woooo, I love it when they give us all the names! Yay!

They're all influencers because of course they are.

Time to finish getting the boat ready!

Supper first, where drama rears its ugly head. Chris asks about using the hot tub, Madison responds with a snarky and indirect comment about Adam and Jenna using the Master Guestroom, that was unnecessary. Adam overhears and confronts her, can she go a day without drama? An hour?

Madison says she wasn't shittalking, she's never been on a boat where the crew could just bunk down in the Master Guest cabin when they felt like it. Adam doesn't believe her.

Adam's new roomie snoooooooores. He gets along all right with everyone, Jenna challenges him: is he the kind of guy who takes offense when people make fun of him?

That's not really a question. That's just part of the oh-so-professional hazing that everyone gets to enjoy on jobs like this because: bonding or some shite.

I wouldn't be young again for all the tea in China.

Time to clean and set up and squeegee and all that good stuff! Georgia helps Ciara while Paget and Chris gossip about them. Jenna's not happy to hear that Madison was commenting about her (second) night in the Master with Adam, not long after she tells third steward Georgia that she'll be helping more in service instead of Madison. She tells Georgia that Madison won't be happy about it, so Georgia suggests that Jenna frame it as teaching her.

That's right, an underling is explaining to her boss how to screw over another underling so that she won't be AS mad. Nothing against Georgia, this is her boss and she doesn't want to bring on Jenna's ire to herself, that's just garbage management. As usual.

Of course Madison knows exactly what's led to her demotion.

Time for the guests to arrive! They look...like influencers or like someone who would use that word unironically.

Has Adam not been to Park Slope or what?

These are beautiful, beautiful people that talk in baby voices into their chins. Boat tour!! I love the boat tour!!

Jenna mocks the guests in interview but is appropriately servile in their company, great, now I have to defend these walking hair extensions. They are very sweet, even if they give off a sense that they wouldn't be able to answer a direct question if their tans depended on it.

Chris works hard in his new role, the ladies have applied their laser focus to scoping out Adam, he's #keeeeewwwwttt.

Madison gives us a little more backstory, she's been interested in fashion since she was 16, creating outfits and rocking actual labels now.

The ladies love Adam's snacks, guest Evelyne carefully narrating out loud every single picture she takes, is that...for us? "Charcuterie and HUMMUS!" enunciated properly is a great description?

Primary Lyndi flirts with Adam in front of her non-Primary boyfriend, interesting dynamic there. It should be said that Jesse is a smokeshow, but a quiet one.

Chris is a sailor's sailor, he shows us some hot pics of himself sailing on a competitive sailboat, wooo! I have a friend whose family competed in the Olympics with their sailboat!

Georgia is enjoying being above deck, almost as much as the guests love taking pictures and Adam and Jenna like being inappropriate in the galley.

Ciara explains sailing to much more experienced Chris, who listens politely and then we're asail!

It's been four hours, the guests need to change their clothing because those Instagram pictures aren't going to take themselves!

Ciara puts deodorant on the OUTSIDE of her shirt? Wat

Captain Lee has a plan involving a stern tie again, basically tying a chain around a rock, and then turning the boat again so the guests have this Insta-worthy view for supper. 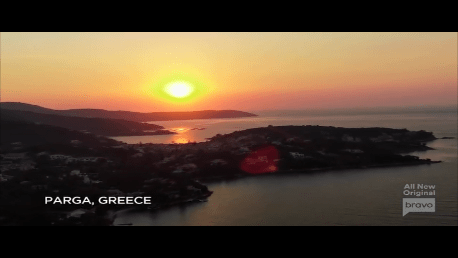 Chris is dispatched to tie on a rock, but disaster strikes when the NautiBuoys runs onto the rest of the rocks. This is all Paget's fault, Captain Glenn calls it a Parker Move, oooooh. That's gotta hurt.

Awww, Parker and Kaiti are so happy!

Bravo, I thought this guy quit, right? So we shouldn't see him again? Right?

It's almost time for supper, Primary Lyndi has a fight with boyfriend Jesse, he wants to wear black! So she has to change. Of course, because this is the Real Yachties of Orange County, she argues in a baby voice interspersed with "laughing", followed by a passive aggressive "okay" response to his "I love you."

The dinner table looks amazing! You know what's odd, Primary Lyndi only takes pictures of herself, not with Jesse, her boyfriend sitting right next to her.

It's time for a wine and cheese tasting, yay! I spy Manchego!

Primary Lyndi spies Adam and says "I love you" TWICE at him, Jesse finally has to say something and that is "lock it up." She responds that if he tries to tell her what to do, she'll do the OPPOSITE and I'm exhausted already watching these two. This blossoms into a full-blown fight, why is Primary Lyndi acting like a messy toddler?

We'll find out next time, coz we're out! Cheers