This is it! The season finale of Below Deck Sailing Yacht, are you excited??!! Yeah you are! Me too! I don't know if we'll get a reunion over Zoom, have you heard anything? I could always ask The Google... Alright, without further ado coz I feel late already, here is my BDSY S1:E17 Regatta Go! recap!

We do a quick look back at the whole season to start, whole lotta chef Adam Glick and chief steward Jenna MacGillivray dramz, followed by the medical concerns of deckhand Chris Miller who herniated a disc in his back in the worst way right before the last charter. I thought First Mate Paget Berry flirting uncontrollably with third steward Georgia Grobler would have placed higher on the remembrance list, but what do I know?

That's next, boy, they do show a lot of Georgia's adorable bum, don't they? Paget certainly seems to like it, more than his girlfriend and deckhand Ciara Duggan. Ciara just doesn't take it seriously, which is probably the way to handle it, we'll see how that plays out in the reunion.

Jenna came pretty close to being fired by Captain Glenn Shephard, who didn't like her lying to him, lying down on charter and basically: being more interested in the D than her team. Third steward Madison Stalker did her best to not get involved, but he dragged her in and things would have gone all the way sideways if this wasn't our very last charter.

Oh! And we've got a guest possibly high AF on our very last charter, Captain Glenn's going to be dealing with that right.now. He wondered if perhaps the white powder around the guest's nose was Adderal, but I checked my extensive knowledge of that drug gleaned from gossip websites and nowhere does it make you zone out and almost fall asleep like this:

Of course, that's also true of cocaine...so? I dunno.

At the end of last episode, Captain Glenn took Primary Charter Guest Nicole Gary aside for a chat about the White Powder of Mystery. If it is cocaine, that's the end of the charter, Primary Nicole does not want that.

(I mean, we heard loud sniffing noises. More than once)

The guest in question is called in from the water and denies there being any powder anywhere. He looks suuuuuuper high as he says that, Captain Glenn advises that he'll need to check Billy's luggage now.

Primary Nicole and Madison are witnesses as Captain Glenn goes through Billy's luggage, he's starting to get belligerent, calling the captain 'bro'.

Captain Glenn doesn't find anything, so the charter continues but now it's super duper awkward. Madison and Jenna both start shoveling out the drinks, but Primary Nicole is stressed out and Billy is thinking about leaving.

This is a gross way to end a charter season, the tip is going to suuuuuuck.

Adam sends out a tonne of food for lunch with a smile on his face and everything! It doesn't help Billy, who's not hungry, just embarrassed and angry.

Paget picks up a couple of adorable sailboats for the guests.

Madison is working as hard as she can to make everyone happy again.

Billy does not partake in her special drinkies. He works himself into a lather and storms into Captain Glenn's bridge to have it out with him.

Captain Glenn calls Ciara, chief engineer Byron Hissel and Paget to the bridge to explain the plan for the regatta.

Then it's time to race, guest Billy and Byron up against Paget and...one of the other guests who hasn't had their belongings searched for illegal substances. And they're off!

Deckhand Chris Miller is dying at not being able to be on these tiny little sailboats because of his back, that's how he grew up!

The guests had so much fun that the mood lightens, whew. It's time to dress for dinner! Since it's a Greek party, the table setting is extry fancy; poured golden glitter sand and everything!

It's Ciara's birthday tomorrow, Paget, her boyfriend of four years, has gotten her a Leatherman multi-tool, just like every woman or person wants.

Byron and I are confused. He says it's ONE of her presents, he just, erm, hasn't gotten the other ones yet!

Supper time! Madison and Georgia celebrate: it's the last turndown, woooo! Adam sends out a dozen platters of Greek food, it would be fancier if he plated, right? The guests think so.

The guests love all the lobster, plated or not, it's kind of a quiet night for a Greek party, the guests heading to bed relatively early.

It's 6:00 am the last day of the charter season, everyone's up early! Guest Jeanette who won the regatta yesterday is up doing yoga on deck and I love her for that. Breakfast is served at 10:00 am, guest departure is noon. You don't gotta go home, but you gotta GTFO.

Primary Nicole leaves a tip with Captain Glenn, he runs to blow the horn and I try to use my laser-vision on the envelope to see how disappointed everyone will be. I have to say: they were very complimentary about the service, soooo maybe it won't be as crappy as it could be.

The boat needs to be cleaned, but first a little smoochy-smoochy in the galley between Adam and Jenna, then she wanders into the crew mess where her staff is eating. How did they think the season went? Well. I don't think Madison's gonna say anything, but Georgia jumps in. Jenna thinks all the joking around has been cool, everyone else?

Ohhhhhh so true and to her FACE. Respect.

Georgia's not done, she's got specific receipts, how about the jokes Adam and Jenna have been having at everyone's expenses?

*Please, someone bring up the breastfeeding deckhand, PLEASE.

Jenna again defends the indefensible by saying she was making jokes with Adam because Georgia was asking stupid questions and that's how she vented.

That's what she says! Stupid questions. She says this to a junior crew member she was supposed to be training.

Madison and Georgia head to laundry to high five over Georgia's awesomeness while Jenna commiserates with Byron, another salty dog of the sea. He agrees that junior staff needs to cool it, but alas: yachting is too soft now.

This is like the parents who yearn for the long lost days when they could torture their children properly and smack them whenever they liked, to keep them on their toes in case they needed them to fetch a beer or something.

Byron was the first to wish Ciara happy birthday at 6 am, I love how her whole face broke into a massive smile. That's the truth: every single person wants to be recognised on their birthdays, everyone. Everyone wants to feel special, no matter what they say like: 'it's just another day', 'it's really more for the kids' 'I stopped celebrating at 39.' Every single person in this world should feel special on the anniversary of the day they were born, the world is a better place with them in it and you should let them know. I'm a motherhumping MONSTER on my birthday.

Ciara is super happy with her Leatherman.

(I do not like practical birthday gifts. I am never happy on my birthday because I am a MONSTER. Although this last year was good.)

Madison and Georgia hear the singing from their room and rush to make the end of happy birthday.

It's the last Tip Time of the season!

Adam and Jenna cuddle and plan in the crew mess while he thinks about using the L word with her. She's the closest! But is she the one? Is he the one? He has a lot of rage and insecurity issues.

Georgia has decided she can't hold her tongue any more, she's got to say something about her feelings for Paget.

Awww yikes, lady, just leave it as an unfulfilled crush!

Oh thank the gods, she decides to tell her friend Ciara instead of Paget! Yayyyy! That's a much better choice, but it's still awkward. So awkward. Ciara says she knows, then doesn't say anything else as Georgia stumbles through an explanation. "You're fine."

Ciara tells Paget as soon as she sees him, Byron's listening from the crew mess.

THEN Paget asks: Georgia HAS or HAD a thing for me? As Byron and I laugh and Ciara stares at Paget. Hahahaha oh no. Wrong, wrong thing to say.

Everyone gets ready to go out or got to bed (Madison is in pajamas, but like, fancy pajamas, oh wait, she changed, never mind), time for one last crew supper!

I can't help but compare this to the utter shambles of Below Deck this year. By the end there was repeated occurrences of blackout drinking, the threat of physical violence and no way that the whole crew could hang out together. This is a Salt Spring Island Buddhist Retreat compared to that.

Captain Glenn does a roundtable on everyone's high point of the season, it's so cute that Paget says the regatta when he means playing guitar and singing with Georgia. Jenna brings up the proposed threeway from so long ago, she can't help but be an arsehole, can she?

Adam says the high point is meeting Jenna, of course.

Captain Glenn leaves his crew on the beach to stay up late and make bad choices, Ciara needs to stop literally swinging her braless breasts around, she's going to take out an eye.

Georgia brings out her guitar, Paget asks, as her number one fan, if she can play the song in his head, fanks. She does, Ciara looks...not happy. She lays down as Paget sings along and acts out all the lyrics. Oh goodness.

Paget follows Madison and Georgia to the beach club dance floor to cut a rug, Ciara waits, then literally pushes between Paget and Georgia to separate them. More group dancing then an extremely stagey meeting in the bathroom.

Let's break this down:

He has something to tell her.

And that's it! Time to go and everyone is going for good tomorrow, wooooo!

We're doing LIFO, aka Last In First out, so g'bye Chris! I hope your back feels better! I hope we get Captions of Truth!!

Byron is next, awwww, his wife and daughter are there waiting for our huge gossip! 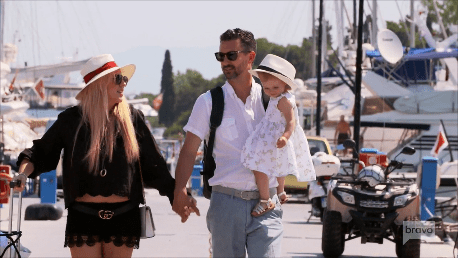 Madison is my favourite and she's next to go, she learned that she's more sensitive than she thought this season. She cries when saying goodbye to Georgia, that's like her sister.

Ah a heartrending goodbye between Georgia and Paget, it didn't only go one way, you guys. He was into her as much as he could be, given that he's happily coupled up with Ciara, who's been part of his life for four years. It was still sad. It still hurt, all the way from here because it hurts when you can't be with someone you care about.

Georgia heads out, then Jenna and Adam together. It's just Captain Glenn, Ciara and Paget at the end, see you next time, guys!

We getta tiny little vignette with Adam and Jenna camping in his van, but rumour has it they've broken up already so I hope they didn't drive far.

Cheers and I'll see all of YOU for Below Deck Mediterranean, back in no time! Wooooo!