Good evening ladies and gents; who's ready for some Peak TV? Me either, let's watch Below Deck Mediterranean instead. Rolling S2:E11 The Dubrovnik Wedgie after the break!

We left Captain Sandy Yawn pressing bosun Wes Walton for a decision as to who is going to be his lead deckhand: he chooses green deckhand Malia White whose wobblies he's been doing his level best to get up against.

Okay, okay, it's not that bad, Captain Badass Sandy thinks that's a good decision, Malia has that foreview that (slightly) more experienced deckhand Bobby Giancola lacks. Greenest deckhand Max Hagley was never up for consideration; he doesn't wanna mess up his hair. At one point in this episode he has to Google whether or not looking at a microwave will burn your eyeballs. For real.

Captain Sandy leaves it in Wes' hands to tell his crew; Malia's gonna be in charge! I'M SURE THAT WILL GO OVER AWESOMELY.

She figures she earned it, she just knows she's gonna be up against it below deck, where everyone's gonna think her extracurriculars with the boss got her the job.

The dinner inside is the only favour the weather is doing our gang, Captain Sandy and the crew are fighting against the anchor while Hannah gets hit with extremely specific drink orders. Finally, Captain Sandy has to call it and they head back to dock, the winds are making it impossible to stay anchored at sea.

The guests seem to understand, but Shannon expects that Hannah and crew will make it up to them the next day! "Hahahahahaha"

*first fake laugh and finger point of the episode*

The crew is in full diversion mode with Hannah and second stew Christine "Bugsy" Drake keeping the wine glasses filled and Adam introducing plate after plate of beautiful food. It's hilarious to me how much harder he's trying on this charter, by dessert he's not even rocking his greasy baseball cap turned backwards. He actually looks like a fancy yacht chef.

Okay, I take back all the mean stuff I've said about Shannon McCoy, star realtor of the seas, because she takes her comments to Captain Sandy directly. And there isn't much, a towel left behind in the master (that seems like a biggie, to be honest) and that kind of thing. Captain Sandy just wants Shannon to be happy coz if she's not:

Nobody's happy the next day, the winds are at 25 to 30 knots (sounds...fast) and it's only 57 degrees (F so I dunno) outside so they can't take the guests to that secluded private beach they wanted to and there are no water toys they can use.

Shannon waits to see what the crew will come up with, but another one of the guest who thinks Captain Sandy is some kind of weather goddess is about to cry. You can actually see "But BUT BUT I'm on a yacht!! And I want to go to the BEACH!! You have to take me to the BEACH!! Because otherwise I'm going to CRY!!" cross her face. I'd blame that on her parents that I don't know, but turns out sometimes people are just entitled assholes all on their own.

The Primary Charter guests are super chill about the news; they take Hannah's rundown of the day's schedule (tour guide then masseuses) with equanimity. I have my eye on that one, though, since the promos tell us someone is leaving the boat in a huff.

I'M SURE IT'LL BE FINE

It is, woot, go Bobby! He accepts Wes and Captain Sandy's decision without rancor, even congratulating Malia for her promotion and saying she busts her arse.

It's just that Bobby thought HE was already the lead deckhand.

Ohhh and that guest I was talking about earlier? That's Samantha and she is definitely the one leaving in a huff. She doesn't think the sea is that bad; if she's not cruising, she has other things to do.

SHE WAS PROMISED A SPECIAL CROATIAN BEACH!! Don't tell her it would be putting the safety of the guests and crew at risk, SHE HAS THINGS TO DO!!

She leaves and the tour guide arrives to bore the fuck out of the remaining guests. Seriously. It's cold outside, having them traipse across Croatia on an educational tour instead of yachting in the Mediterranean is NOBODY'S idea of a good time. Forget about the tip; they're gonna be asking for a refund.

The guests come back aship for massages and champers

Malia tells Bugsy about the makeout sesh on the bridge while third stew Lauren Cohen eavesdrops from the laundry room; she about breaks her leg running to snitch to Hannah. Hannah is ECSTATIC there is new dramz that has nothing to do with her, go Malia!

Lauren takes Bobby outside to tattle while the rest of the crew watches over CCTV. I love Bugsy's deadpan play-by-play recap "now she's jumping up and down..."

Bobby's mind is blown. He's gotta go lay in his bunk for awhile and work up the energy and nerve to spread this gossip.

Adam's working on a Croatian-themed supper and Hannah got a local a capella group aboard to sing for the guests, good luck guys!

Bobby and Max pull Wes aside to confront him with their allegations; Wes sticks to his guns. He chose Malia based on her initiative, not her mad tonsil hockey skills. (I'm sorry, I'm old, I don't know what the youngs call it these days) The boys leave furious.

Supper goes very well, this is a whole new Adam, out there impressing the guests with his culinary art and super clean chef's whites. Hannah and Bugsy discuss AnchorWatchGate, but Hannah doesn't want to throw Adam off his game by distracting him during charter. Loads of time for him to meltdown after the guests have left.

The crew hang out and wash dishes in the galley; how can Hannah not know how to tell a joke??

The next morning, Adam's working hard in the galley while the guests filter out for some brekkie and Bobby is STILL losing his shite below deck. Malia hears him talking and confronts him; so she can't work hard AND be attractive? I get what she's saying, but the guys are more concerned about the active relationship she's in with her boss who just promoted her right now.

This is why people don't date at work!

Apparently Lauren didn't get the Don't Tell Adam Until After Charter Memo because she spills all to him in the kitchen and manages to make it seem even worse than it is too. She's awful.

The guests leave with another nice speech and a disappointing tip: $12,000, which is about right for great food in a floating hotel.

Adam paces and waits until he finds Wes and Malia alone; look, it's his favourite couple!

Now, we know that Adam is a vindictive fcker when his feathers have been ruffled; this little glance at the camera makes me wonder if this is just for show. Anyone else catch this?

Adam gets to it, Wes explains it was just the one night after anchorwatch, but Adam's not even listening. He's moving around the bridge, asking Malia why she played him, how she sleeps at night, you know: the usual. He's almost like a fighter, dancing around on the balls of his feet looking to get a jab in. Nobody will bite so he heads downstairs to start plotting his revenge. He thinks this "massive backstory" of him and Malia's doomed relationship is going to devastate Wes.

It is very tense between Wes and Adam right now.

Bugsy advances our plot next, checking in on Adam in his bunk who is ready to blow everything wide open with Texts Of Doom: 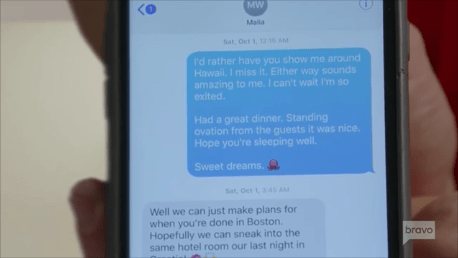 Adam's saying he got a text from Malia saying she didn't want to date Wes on the very night of AnchorWatchGate and I'd like to see the receipts on that, please. Also: I love seeing texts because it's so nice and clear but also: hella creepy and not respecting someone's privacy. As I snapshot it and place it in a recap.

Adam mentions those texts to Wes as they head to town in Dbrovnik for a crew night out. Adam, Bobby and Max split off to go shoot Irish Car Bombs, which are a half pint of Guinness with a shot of whiskey (? guessing) dropped in. Haaaard passsss.

Wes walks up as they boys are discussing Adam attacking Wes while he's sleeping, this is going to be a bad night.

And I'm right, Adam gets schwasted long before everyone else and ends up giving Wes a wedgie and taking a swing at the back of his head, which is really not on, Adam. It doesn't land, course, but Wes is furious and much more sober, so I'd be worried if I were Adam. And not drunk. I don't think Adam is physically able to worry right now with that belly full of Irish Car Bombs and a pocket full of shady texts from Malia.

Lookit: Malia may have liked Adam when she met him, but then she met Wes and liked him even better, not so clingy for one thing. Her age for another. So her leading Adam on with texts just in case things didn't work out with Wes...naw, I can't make that be okay. That's somebody not ready to settle down; just remember, Wes. She's a nice girl and she's still playing the odds. You don't wanna be someone's option, you wanna be someone's choice. You seem like a nice guy, Wes, you can have that advice for free.