Wooooo I think Hannah's getting some again, this has been a GREAT season for Hannah and her wobblies on Below Deck Mediterranean, hasn't it? Although she might wanna reconsider "poking it out" with Adam on this here episode Stew The Right Thing, since she can't walk and all. Rolling S2:E13 after the break!

So. To catch you up: deckhand Malia White has been the pointy part of a love triangle involving her, bosun Wes Walton and chef Adam Glick. She met Adam first, he's been trying to pee all over her toes ever since. As a bonus: these guys share a room! Yeah!

We left our gang splitting up at the local club in Split, Croatia: a schwasted chief stew Hannah Ferrier kissing Adam and walking with him back to the boat. Well. Sort of walking.

She's gonna spend SO LONG trying to figure out where those bruises came from!! SO LONG!!

Back at the club, thanks to second stew Christine "Bugsy" Drake, Malia makes her drunk-ish move on Wes, who likes the lovey!

I'm confused, at the end of last episode Malia was walking out after Adam and Hannah because Wes was gin and tonicing a local. Now it looks like she stayed and sucked face. I'M CONFUSED.

The gang all heads back to the boat, where Hannah is STILL drinking (Grey Goose and Kahlua? Hard pass) and pretending she wants to stir the pot by grabbing Adam's crotch, he takes a soft pass. No fanks, Hannah! She's at that stage where she needs to blow into a tube to be sober enough to be on TV.

Wes also fell getting on the boat but Hannah biffs soooo hard falling off the galley counter that I am legit worried for her melon.

Hannah makes it into her room, just in time to pull the phone handle off the wall at inexplicable intervals and Wes climbs into bed with Malia. Just when things are getting interesting, deckhand Bobby Giancola decides this is when he needs to call Wes out for being a hypocrite for promoting his (basically) girlfriend ahead of him. At 2 am.

It's 9 am and 5 hours until charter, woo hoo! Everyone is up and working hard on cleaning and setting up the boat. Well. Almost everyone, Hannah's sleeping it off in her cabin while Bugsy does all the stewing above board.

Bugsy is mostly super mature and focused for her age (save the sharing Hannah's texts with a guest with Bobby, and I'm still writing that off as trying to get some FunBobs in her) and very opinionated, I'd be surprised if she took a secondary position again. She's chief stew material all the way, allllmmmoost as much as she thinks she is.

But she should not have gone and spewed all that to Captain Sandy Yawn. Or maybe it was time to out Hannah for her lack of work, what sayeth you?

Captain Sandy is a great captain, honestly, I love her empowering but not overpowering management style. She listens to Bugsy but leaves it to her to fix: does she want to confront Hannah about not setting one single table all charter season? Bugsy comes to the same conclusion I did: no way should Bugsy take second stew again.

Wes gives Malia the instructions for the crew; he doesn't think his being in a relationship with her is a conflict, even though he had personally given himself that rule previously. He also lives on the boat, it makes sense that he's gonna wanna date one of the only people he's around. I think you should just never date people in your department, it's the same shite I gave to Stella Gibson on The Fall: bang people in OTHER departments!

Hannah meanders into the kitchen; how's her bum?! It's soooooore, thanks for asking and she and Wes catch up while she has a bite and CinderBugs washes dishes and shoots daggers with her eyes.

Pre-Charter meeting time! I'm pretty sure Hannah is still loaded, she doesn't even seem to remember Jerry Thibeau and his gang. Last time they were here : Below Deck Med S1:E7 and Below Deck Med S1:E8 it was just dudes and they were looking for a "target-rich environment." Meaning wanna-be yacht girls, looks like they got some with them this time! Joining the charter are Estee Schmidt, Elisa Crisaf, a former NHL kicker and Paula Manzanal. The ladies are all super pretty but I'm wondering why we don't find out Dean's last name, coz he's probably bringing the targets. Jerry liked rum milkshakes and a good time.

UPDATE: Dean is Dean Biasucci, former kicker from the Indianapolis Colts! Thanks HM from the comments!

Bobby chimes in with his opinion of Jerry, but see, Jerry didn't like Bobby. He liked DANNY! You remember Danny from last season!

He did very well with Jerry's sausage party! Captain Sandy gives Bobby a reality check: in the yachting world, the crew doesn't get to choose guests, it's the other way around. And if the party is high maintenance, they provide more maintenance! It's how the world goes round.

Malia takes Bobby and other deckhand Max Hagley aside to ask them for a chance to prove herself as lead deckhand; Bobby really appreciates the honesty. Max is in it for the hug.

Oh goodness, guests are coming in 20 and Bugsy decides this is the time to confront Hannah. And she had to work herself up to it, so now she's almost crying and start off with "you've been a lousy chief stew!"

It does not go well.

Bugsy is so nervous that she's not very articulate, she runs off eventually and Hannah goes to Captain Sandy to ask about taking the late shift. Captain Sandy congratulates Hananh on her decision-making and jeebus wept, Captain Sandy.

Hannah takes Bugsy aside to tell her she's off Lates, I love that Bugsy's all: that has nothing to do with it, LAZY ASS but Hannah didn't like it quite as much as I did. 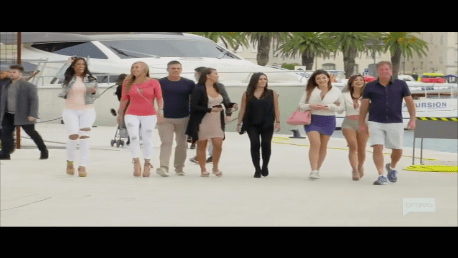 Hey, looks like Primary Jerry lost some weight and highlighted his hair! 2 guys, six girls, including the one Bobby was matched with. He approves. What's on his Tinder that he got matched with a yacht girl?

I AM NOT LOOKING

Boat tour! For the first time, two guests get lost and end up with Captain Sandy, one is Paula who has an accent that I haven't been able to place yet.

It's such an odd dynamic; two middle-aged men sitting across from 6 much young women. The two dewds sit at the head of the table together too, it looks so WEIRD. The women are using drunk-baby voices too, I think Imma need one of Jerry's rum milkshakes soon.

So in the pre-charter meeting, we all heard that the Primary doesn't want salads, right? Adam serves up three salads for lunch then sits back in his galley and stares at the Texts of Doom from Malia.

Hannah gives him a pass because clearly this is Malia's fault, right? That Adam, a well-paid, long-trained yacht chef can't remember that two hours ago he read that the primary charter guest paying tens of thousands of dollars for this floating whorehouse doesn't like salads.

These women are all very beautiful...but so far have nothing to say. I think I went to Banff with dese ladies.

Primary Jerry (looking very Scott Bakula!) goes looking for Bobby (why?), Bobby spills the beans about the Tinder match and let's just say whatever Jerry does for a living, it isn't acting because his "oh I know!" suggestion about setting aside a date for Paula and Bobby is...not believable.

Oh mein gott. The guests relax, and by that I mean the women get into bikinis, stare at their phones and take selfies while the men watch. Literally. They don't talk, they just stare and it's just like Gyno Row at your local strip club. Awkward.

They keep showing Jerry alone with his tongue out while the women shake their bums while mostly ignoring him, is that editing? I sincerely hope this is not Jerry's idea of a good time.

Malia tries to smooth things over with Adam in the galley, he pretends to appreciate her attitude but I bet that's not gonna last long.

Hannah complains about Bugsy to Adam, which is just too ironic considering it was Adam who put the idea in Bugs' mind that she was a better chief stew than Hannah. They pause and Adam's back on to complaining about Malia again.

Look. Adam. She doesn't want to date you. Maybe she did. Maybe she liked both of you but couldn't make up her mind. PEOPLE ARE ALLOWED TO LIKE MORE THAN ONE PERSON. I can absolutely see why Malia did not like Adam in the end.

Bobby's Tinder Date was...funny. I love that Bobby asked about why Paula and her friend are in Australia, his quick "for university?" made me laugh out loud. I'm not saying it's impossible that these women travel on yachts in between taking university classes, I'm just saying I don't think student loans would cover the plastic surgery, hair extensions and M.A.C. forcefields. Max doesn't think Bobby has any game, he's just staring with love in his eyes and not nearly enough in his pants. Pants pockets.

This is one of the girls studying (her phone) and the other keeping her company:

Hey, guess who's texting with a charter guest?? Oh, no, not Hannah, she's too old for dese guys, it's Bobby! At least Bugsy gives him a bit of a hard time, it would be awfully hypocritical if she didn't.

So Bobby goes to Paula's room, which smells like beautiful ladies. Vanilla? A suuuuuper long hug later and FunBobs is running off like a little girl in the woods.

Next morning brings everyone working and Adam continuing to obsess about Malia.

Some flirting later and Bobby agrees to take charter guest Paula out for a jetski ride. Halfway through, he stops, matter of factly turns his hat around and starts to make out with her. This is a first kiss? 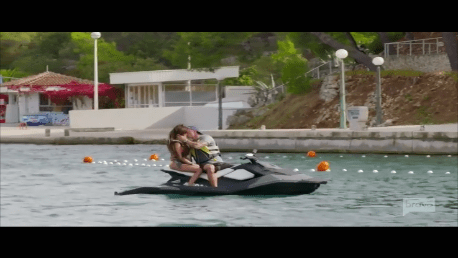 Um. This is a guest on CHARTER. AND one under the pay of Mr. Jerry Thibeau. What the Sam Hill??

Hannah stirs the pot some more, is Adam gonna say something or not?

He makes his move when he finds Wes alone, showing him the four weeks of texts with Malia. You cowardly, spineless vindictive c-word that doesn't moo. Okay, so you and Malia messed around and you liked her and she liked you but she also liked Wes (MAYBE BECAUSE HE'S 1000 TIMES LESS DRAMA) and now they're together and you're going to burn it down to assuage your pathetic ego? Screw you, dude, and screw you Hannah for encouraging this piece of shite. I'm oot

Until next time, which is the last time this season, booooo!