I don't care what the title of this episode of Below Deck Mediterranean is titled, I'm calling it Hannah Gets Some! Let's roll after the break!

Oh right, we're still at the bar and deckhand Malia White has just RUINT the crew's bitch session about Chef Adam Glick by suggesting they should support a coworker who is having a bad night and going off herself to see how Adam is. Total buzzkill, pfft. I dig that she's standing up for Adam but he totally doesn't deserve it after being a total dick to Primary Charter Guest Ken Novotny ON PURPOSE. That coulda jeopardized their tip!

Malia's boss, Bosun Wes Walton watches her walk away; he doesn't even want to know her if she's going to stick up for Adam! I think the point is more Adam's stick, ifyouknowhatImeanandIthinkyoudo.

Chief Stew Hannah Ferrier is STILL bitching about second stew Christine "Bugsy" Drake; who Adam suggested would make a better chief stew (not arguing). When Bugsy didn't immediately decry that suggestion, apparently Hannah took that for complicity and is now complaining that her tiny bit of human decency when Bugsy's grandmother died has somehow gone astray.

Hannah, are you suggesting that someone owes you for giving them a shoulder pat when a beloved family member died.

It's also creepy af that you're all over third stew Lauren Cohen, whom you couldn't stand a week ago. Now that it's your dramz you wanna talk, Hannah? Take a lap, Ferrier.

Back on the boat, Malia and Adam kiss after he asks her out on a date; fireworks explode! No, legit, actual fireworks explode and I get what Malia is saying about Adam, but her body language is saying something else entirely. Or not. I'M NOT A MALIA EXPERT, OKAY??

Everyone makes it back to the boat to watch Malia and Adam eat ice cream in the kitchen; deckhand Bobby Giancola is rooting for Wes, even though HE likes Malia too! It's very confusing for all.

The next morning it's Bugs who is confused; she pulls Wes aside to talk about Hannah. Why is Hannah mad at HER for Adam saying she should make a better chief stew?

New charter guest meeting! Jason Ziegler is coming aship, is he the one Hannah makes out with?? Maybe so, because she calls him Douchebag Central (dangit, another great subheading) and makes fun of his friends Phil Murdock, Erica Jones Murdock, Laudan Khotanzad and Gina Ginsburg. 7 course meal, Adam! Captain Sandy Yawn is watching you!

Finally, Bugs takes Hannah aside and asks what's up, I hate passive aggressive people that are CLEARLY angry with you but just as clearly not confident enough to say something TO you, just ABOUT you. Hannah thinks Bugs should have had her back, Bugs and I can't believe a grown woman is this insecure.

Now it's Adam's turn to make amends with Hannah, he's right to apologize so I won't roll my eyes too much when Hannah interviews that she's not sure she trusts him.

The beautiful people are here! 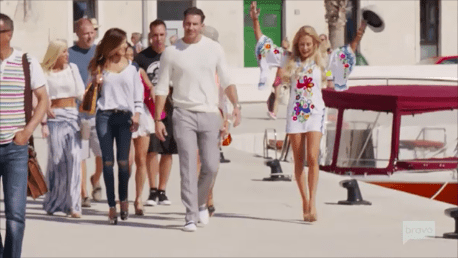 Including Primary Jason Ziegler, nipples on alert and hair greased straight back. The women are all conventionally pretty and I'm pretty sure the blonde hasn't moved her face from her promo pic. Boat tour! All the stews are abuzz at how hot Primary Jason is; I'm just not seeing it. D'ya remember the one guy from last season who proposed? I gotta look it up, because THAT GUY was smooooooking hot. And so nice! I loved that charter. I'm sure this group is fine.

It was Steve Haug on OG Below Deck S4:E7! He was so adorable, and technically a bachelor for the first half of his charter.

Captain Sandy calls Malia and Wes up to the bridge for de-docking, but it's Malia who will be running the throttle! The stews in the galley want to know: shouldn't it be Adam doing the thrusting? Hm? He's adorable when he blushes; when did his eyes get that blue? Anyone?

Cuban party time! Hannah's hurting herself patting herself on the back AND high fiving herself at the same time for finding THE Cuban bongo dude, good for you, Hannah. You did your job. Hold on, that was mean, maybe it's not just Hannah who needs Seven Minutes in Douchebag Central.

Hannah and Lauren smoke after setting up the Cuban beach picnic; Hannah's calling dibs on Primary Jason, but don't worry:

HAHAHAHAHAHAHA suuureee!! And Wes never dates at work either!

The guests have stayed out there until dark, how odd is that? Who wants to drink shots in the dark on a Croatian beach? Deseguys! Wes does the heavy lifting of the guests to the tender, where's Bobby then? That can't seriously be what how they expect guests to get on a boat. Primary Jason wants to know if Hannah will be lifting him up there, then?

Captain Sandy has been all over Adam; she doesn't like that he's joking about onions and saying he'd be wearing a dirty t-shirt if not for her. I like the chef blacks; keep it clean, sailor!

Late dinner on the deck; Hannah serves a quick Cuban-style supper and Adam even pops up to say hello. Oh good, he still has his hat on backwards so he still looks like himself. Hannah and Jason flirt and flirt and flirt and wow, they get on great for complete strangers!

The party carries on after, with Bugsy doing 99% of the work with some help from Lauren as Hannah flirts and parties with the guests.

If I wasn't too lazy to Google, I'd see if Hannah knew this group before their arrival, but alas: there it is.

The cougars are HONGRAY; it's not enough that they've been sexually harassing Bobby (okay Gina has been) on deck and in the galley, they actually come Below Deck to stalk him in his bunk. Ladies! Bugsy saves the day with shots at the bar, and just in time.

Hannah and Jason share a cigarette on deck and chat; he doesn't look 41. They are getting along juuuust fine, which flabbergasts Bugsy: with a charter guest, Hannah? Don't make me go look up her reaction to deckhand Danny kissing the drunk Tilted Kilt model last season!

The next morning the guests are on shore having lunch while Adam works on his seven course dinner; Captain Sandy isn't leaving anything to chance this time. She's in the galley grilling Adam on the guest's preferences, I hope he does well but you know it's just a matter of time when the Captain is quizzing you on your non-seafood options.

It's almost time for the White Party, super organized Bugsy is starting setup in the afternoon while Hannah naps, Bugs just doesn't understand. She shows us pictures of a party she did, it was a big deal with a florist and ice sculptures, not some sheets twisted and hung round the poles while the chief stew naps. Hannah takes the credit for all that anyway later, trust.

The table looks lovely, Bugs takes it upon herself to start serving supper even though Hannah is still doing wine, that seemed like it didn't impress the chief stew.

Gina is visibly upset during the risotto course; she wanted no pork product on her plate! BUT. She didn't say that, so there's no way Adam could have known so Hannah is pissed, but Bugsy is more forgiving. It's yachting, what do you want now, Gina? Bobby and a grilled chicken breast? Sounds good! She doesn't like that either, too salty! Let's move on. To dessert! Look how pretty that is!!??

The guests and crew go to bed, Hannah RUNS after Jason to say goodnight, with her tonsils, whatchu doon, Hannah??

And we're out! Until next time!