We left Below Deck Mediterranean with Hannah snogging a charter guest, even though she swore she would NEVER EVER

We getta hear more smooching between chief stewardess Hannah Ferrier and Primary Charter Guest Jason Ziegler; he loves her little...what? Little what?? SHOW US! She doesn't get to bed until almost 5 am, holy shite.

The next day, oblivious crew members gossip about deckhand Max Hagley and his girlfriend Emily who's set to arrive shortly. Emily doesn't drink, yay! It's been a whole six weeks since he saw her,

Wow, second stew Christine "Bugsy" Drake is pretty forthcoming with the information on Hannah, isn't she? She tells Captain Sandy Yawn and Chef Adam Glick that Hannah was partying with the guests until 5 am and IF SHE WAS CHIEF STEW...

If JSierra was around, we'd totally have to add that to our drinking games list.

Captain Sandy has just about had it with her green deck crew; Bosun Wes Walton won't delegate so none of crew knows how to do anything. She's much more of a mentor than that, but then she's more mature with a metric tonne more experience. I bet Wes thinks he still has to prove himself.

The guests are up at at 'em bright and early at 11 am; Adam's been making "nut muffs" but just for deckhand Malia White.

Hannah drags her arse out of bed to be completely ignored by Primary Jason, but at least the other guests wanted to know if she was all right. Half-win?

He asks for her email address...or something, that's a bit dismissive, yes? Well, Hannah didn't say she wanted to get wifed up or anything, that's cool.

Tip meeting time, yay! Captain Sandy takes a minute to remind everyone to not party with guests, then moves on while Hannah holds her breath. 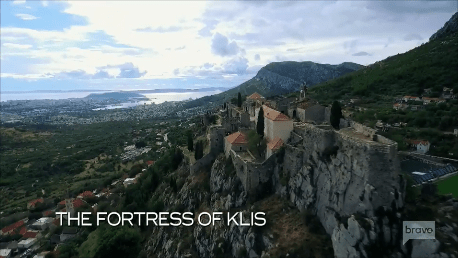 Why is most of her bum hanging underneath her baggy Daisy Dukes? I don't think this woman understands how clothing works.

Max makes her wait ten minutes while he poops.

Off to the Fortress where Game of Thrones is filmed! Where PARTS of GoT is filmed, anywhere there's stone or grass in Europe one of the million or so extras from GoT can be found. Third stew Lauren Cohen gets to practice her sword-fighting skills (not a euphemism) while Wes and Malia flirt and Adam looks confused. He pouts a bit later; Malia and I aren't having that.

Dinner time out! I like Emily, her and Max are just chill and similar. Hannah has ALL her bewbs out, she's very pretty, isn't she?

Malia is tired of Adam draping himself all over her; he may as well be peeing on her toes. She gets up to go to the bathroom and Wes makes his move. If she is going to date Adam, he's cool with that, but if not, he would like to pursue something. And then they're kissing and she's actually into it this time, but there's that date with his roomie the following night, see...

They walk back to the table holding hands, jaysus, Malia, what are you doing?

Adam wants to talk about it right now, everyone bails while they hash it out alone at their table. Adam doesn't understand how Malia is helping heartbroken Wes by leading him on; what about everything they've shared together? "The penthouse? Santorini?" and most creepily to me "I had big plans for you" before the cameras and Wes showed up.

Production asks what we're all wondering: do dese guys know each other? I don't remember a job over to Greece or a penthouse, unless those are fancy words for places to hump on a boat.

Adam admits they knew each other prior to coming aship; why not say anything? They met at their yacht certification course three weeks before coming on Below Deck Med and decided not to say anything so they didn't make the rest of the crew uncomfortable.

The problem is that Malia fell for Wes while she was in this half-assed relashie with Adam; what's a girl to do?

OHHHH, that's what he meant when he said "something like that" to Lauren when she asked if he was single! It's all making sense now!

Malia takes Adam aside back at the boat and essentially: they break up even though Malia tells us they weren't even dating. He takes it about as well as any toddler told to share his toys.

Wes knocks on Malia's door; very happy to hear that she and Adam aren't going on a date the following night but I note how she's careful to walk him out of her space right away.

Adam is like me: he gets stressed, he cleans! For two hours, until 3 in the morning.

27 hours until next charter and it's Braai Day! Wes is excited; Max and Emily wanna double with Bugsy and Bobby so they're kind of celebrating too!

Pre-charter meeting, yay! The Primary is Lauren Kaufman, owner of Goza Tequila (out of Atlanta?), other guests include Mark his life partner Shawna, Bobby Marek and his life partner Joe Chambers, power couple (herk) Brandy Coffey and Ricardo Ruiz del Vizo and some other randoms I'm sure.

Hannah has been doing nothing all day but texting; Bugsy's starting to get annoyed. IF SHE WAS CHIEF STEW

Oh but it's worse than that; when Jason's phone broke, he signed into an iPad so Bugsy gets to see all the texts Hannah and Jason have been sending. Bugsy runs and shows deckhand Bobby Giancola right away.

Why would you show Bobby? Does Bugsy have a thing for Bobby? Why wouldn't she show it to Hannah? And if she's after Hannah's job, why not Captain Sandy? Showing it to Bobby makes zero sense to me.

An oblivious Hannah explains to Lauren how Jason found her on social media and oh sure, totally professional while on charter and then after...Bobby's digging in and starting to read the texts from the beginning.

Max, Emily, Bugsy and Bobby head out for supper; Bobby pulls out the iPad so they can all revel in the fact that Hannah and Jason were texting WHILE he was on charter; ooh and the texts are still coming in! Hannah's waiting up on bow to see Jason, who casually strolls by and then she's going off for a walk, the crew hot on her trail.

I don't care; I don't think Hannah was trashing the crew, she was just making conversation with a guy she likes. Emily is bored AF with how juvenile and dramatic everyone is acting, I think I like her AND her illfitting tiny shorts!

Wes and Adam have assembled the Braai grill; it's super charcoaly so he smears it all over him and Malia's cheeks for warpaint.

Bobby and Max follow Hannah, they can find Jason, but not Hannah, so they keep looking while Busgy fills Wes in back on the boat about the iPad of doom.

Emily and I are so over it. She brings up what an invasion of privacy this is, goodonher.

Max and Bobby are spotted by Hannah, they all walk back to the boat together while Bugsy makes up her mind to blow this up as much as possible. Hannah must be told because too many people know about it.

So, clearly the only sensible thing to do is to gather everyone and confront Hannah out on the bow by herself in the dark.

I am super disappointed in Bugs, I thought she was better than this grade school bullshit.

SUCH an invasion of privacy, hours and hours of personal messages sent back and forth, Bugs. Come on. Lauren can't believe they read Hannah's messages all day. So immature. Just like Lauren doing her best to find out who Malia was kissing the other night? AND what about the crew reading the GUEST'S messages???

Emily's off the next morning; I really like her and Max together! They seem like a real couple, very sweet and I dig that he's not putting anything about and she seems really into him as well, although she can't seem to keep her hair on her head.

Hannah's processing everything that's happened in the last 24 hours, she needs to talk to Captain Sandy. Hannah comes clean; Captain Sandy is NOT happy. She doesn't seem to care about what happens off charter but she's pissed that Hannah allowed a guest to kiss her; how many times does a guest hit on the crew? Given all the booze on a charter, I'm surprised it's not more often. Hannah is not on night shift any more, Bugs will cover that to protect Hannah from temptation.

Hannah comes for Bugsy next; Bugs is still trying to duck and weave and not take responsibility for her actions. She's solely focused on Hannah being in the wrong and having committed what she thinks is a fireable offense. Hannah is coldly angry; Bugsy is almost in tears and asks about swapping rooms. Hannah thinks that's a great idea and so does Lauren, it's the best day ever!

Lauren calls Malia Ronda Rousey and I guess I kind of see the resemblance...

The crew switches rooms, Malia singing out: Bugs is moving in with Malia! Bobby and Wes ask why; Malia's "because everyone on this boat wants to sleep with me if you haven't figured that out yet" makes all of us laugh out loud.

Primary Lauren looks a bit like Stella Maeve from The Magicians (damn I'm so behind on that show!); she's so friendly! Yay! I love friendly!

Boat Tour! The guests all "yaaaassss" when they see the bar, hahahaha.

Bobby has asked to de-dock the boat; Captain Sandy is impressed with his initiative. Not so much with his de-docking skills, but once he gets some practice, he'll be fine.

Adam comes out to meet the guests; Hannah and I HATE that he chooses to talk to guests on a multi-million dollar yacht with his greasy hat backwards, Crocs, a dirty apron and a dirty towel slung over his shoulder. COME ON.

Adam asks Malia for his lucky hat back, awww.

The guests enjoy their water toys while Hannah decides to do something about PigPen the Chef. He responds just like you would think

Since Adam only LOOKS 40 but acts like he's 12, we already know he's going to go on the offensive as brutally and immaturely as possible. I love it when grown people lash out like sleepy toddlers!

And we're out. Until next time, where I think there is more Malia x Wes snogging!

Is it creepy that I am looking forward to that?