How was your summer? Mine was BIZZAY, are we done Below Deck Mediterranean yet? Noooooo let's roll the penultimate episode of the season, One Million Percent!

We're back at dinner with chief stew Hannah Ferrier and the guy she's been dating: bosun Conrad Empson. Conrad is not playing any sort of game well, the one where he recognises that he's lucky to be dating such a beautiful, famous and financially secure woman. He thinks they're having a bit of fun! But now nobody is.

He keeps saying things aren't going well and they should just call it, but somehow they seem to live to argue another day, no matter how many times we hear this:

Someone said that about online friendships: the real ones are hard, the online stuff is supposed to be easy!

It's not going much better back at the table, second stew Brooke Laughton is pisssssed that the guy she's been dating, lead deckhand João Franco, has spent the entire evening staring and flirting with third stew Kasey Cohen. There's a triangle there, which João keeps denying but Kasey keeps encouraging. You know, to "help" Brooke understand that she can't trust João. With friends like that...

Who's going out, Hannah wants to know? Kasey has one more night to get some use out of this dress, yo! And deckhand Colin Macy-O'Toole is "ready to grind on some randooooos!"

Chef Adam Glick heads back to the boat with Hannah and Conrad on a very quiet (but farty) ride.

Back at the club, Brooke wants to dance so João encourages her, he'll just be sitting her with Kasey, on her side of the table. He can't understand why she gets so tense, they're so serious all of a sudden and they haven't even had the inappropriate sex stage!

I am wary of agreeing with João on principle, but he's not wrong. They're barely dating and Brooke is being overly possessive. He's still very much single, which is why he shouldn't be messing with Brooke, who is...dealing with some shite. She gets attached quickly.

Conrad and Adam smoke cigars above deck while Hannah undresses then heads up to hear Adam talking about how she wants a 50 year old man to take care of her. She'd like another chat with Conrad!

Meanwhile, João did as he said and moved to the end of the table next to Kasey, leaving Brooke alone at the end of the other side while they talk about the rough sex João apparently looks like he can accomplish.

Hannah would like Conrad to STFU and come to Prague, okay? He agrees to come if they don't argue over the next few days, but she wants to know NOW. She'll have to change her flights otherwise. He tells her to go ahead and change her flights and in that moment you can see her vulnerability in asking. Ah people. Relationships are pain, y'all.

Brooke dances with Colin while Kasey and João are all over each other. It's so odd back at the boat where it's like Brooke is invisible. It's worse in the crew mess where João has gone from flirting to laying with his head behind Kasey's bum.

Colin consoles Brooke in her room while João falls asleep on the bench seat.

26 hours until charter! Everyone is up and working hard, except João, who's hung over and pissing Colin off. He's going for supper with his parents!

Turns out Brooke was as schwasted as João, she doesn't remember why she was so mad the night before.

Pre-Charter Meeting in the Bridge! Captain Sandy Yawn introduces us to our next set of uber-rich yachties, Primary Clint Harkins will be joining us in a day. So will his daughters Emily Christensen, Ashley Harkins and son-in-laws Charles Christensen and Brent Offutt. Trish Cona will be aship as well. There are so many dietary restrictions!

Captain Sandy is excited about Hannah doing the bare minimum of her job, yay.

João still wants to be mushy with Brooke, who accepts his affection and future planning. Le sigh.

Colin laces up some fancy shoes and heads to supper with his parents, they're so adorable. They dote on their baby Colin, he's such an only child. I love how supportive they are, you can actually feel their love.

Brooke and Kasey make their last set of beds together, making fun of the upcoming Daddy's girl charter guests and telling us a bit about themselves. Brooke's dad cheated on her mum for years and spends most of his money on horse racing and women. She has some baggage when it comes to men, yes.

Adam is taken aback by the age difference between Primary Clint and his girlfriend, she looks like one of his daughters. Almost like Hannah and Conrad!

And Adam is excited about Hannah doing her job again!

The crew is excited that Adam's finally doing HIS job, not only making them food on time but even plating it! Awww guess it just took until THE LAST CHARTER.

João and Brooke keep making out in front of everyone, guess who isn't getting along so well? The Primary Charter Guest's girlfriend, Trish, and his adult daughter Emily. So much passive aggressive bullshit, there is nothing positive to report.

Lookit where they are?? 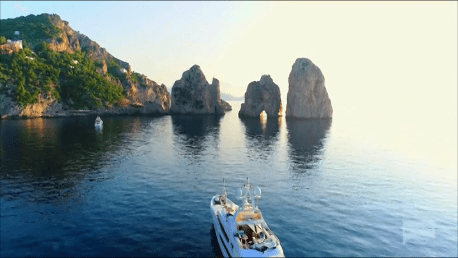 Mexican food for lunch, woooo! Hannah admits to being bummed that Colin won't be going to Prague with her, she's been saying nasty things all the time about how easy it is to get over a 23-year-old

and I know that's defensive, but it's also extremely immature and totally not true as we keep seeing. She's sad that she and Brooke aren't friends any more either, but she still shittalks Conrad to her.

Deckhand Jamie Jason is in serious need of some D

She's so proud of herself for how far she's come!

Back on the boat, Conrad is finally acting his age again and having a blast on the boat setting up toys while the guests explore the Blue Grotto.

I also have a case of Almost End Of Season Itis, I don't want to recap all the petty personal dramas, I just want to look at Italy and dream of going there.

Supper time! And it's early for yacht times, only 7:20 for cocktail hour. Trish wanders off to spray on more stuff and we get a look at the other side of the family dynamic. Ashley says "let's go, Daddy" and her dad's firm "QUIET" makes me think he's not the pushover we've been led to believe.

*I still cringe where I hear a grown woman refer to her father as Daddy, especially when there's a baby voice involved. I have friends that do this, so I know it's not (always) a creepy thing, but

Hannah's arranged for a band and dancers, the guest love it!

I can't get over Trish's face when she hears Emily talking about getting a tattoo to honour her mother that just passed away.

It is soooooo quiet at dinner. None of these people have anything to say to each other, they head to bed at 10:30. On a YACHT. In the middle of the MEDITERRANEAN.

Colin entertains Brooke in the galley and even makes Hannah laugh. He follows Brooke back to her room later and explains how much he likes her. Awww. She doesn't like him that way. At all.

Hannah still hasn't changed her flights yet, even though SHE'S BEEN BITCHING ABOUT IT ALL DAY. All day. She isn't taking any responsibility for the cancellation of the trip, either, it's all Conrad's fault and he should be a gentleman and offer to pay for half of the cost of her changing her flights.

Oh and of course she wouldn't accept it, it would just be the right thing to do.

Conrad complains to Adam, who offers to pay the extra $200 if they both STFU.

Kasey and João discuss their relationship first thing in the morning, he's not ready to be held back in anything serious. Unless it was with Kasey. *nervous laughter*

She finally asks the question we've all been wondering; if she hadn't gotten up and left him drunk at the table that night, would he have kissed her instead?

Ohhhh Brooke, so sorry, lady. I've been that second choice and it SUCKS. Cut your losses now and gtfo. Like we are, because we're out until the last time this season, yay! Cheers!