Below Deck Mediterranean continues to be one of the most popular shows I recap, it's fun right? Watching the crew fetch and carry then pound shots and one another (in a friendly fashion) is oddly satisfying, isn't it? Let's find out if Jack and Aesha are gonna seal the deal any time soon. Rolling S4:E06 Knot Today, Anchors after the break!

We ended last episode with the anchor all kerfluey, that's where we open. Staring at this: 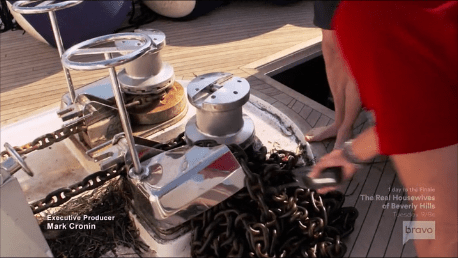 Deckhand Colin Macy O'Toole was in charge of the anchor when it went kerfluey, Captain Sandy Yawn can barely believe what she's seeing. How did he not notice that the entire casing was bent? Anchors are her NEMESIS on the Sirocco.

Third stewardess and current chef Anastasia Surmava preps french fries for lunch in the galley; I have legit never seen a cook take that long to cut up a bunch of potatoes. Maybe she's aiming for perfection, very very slowly.

Chief stewardess Hannah Ferrier is doing all of Anastasia's usual work, she's not happy about cleaning guest cabins, given her position.

*Or that she has a history of being called out for being lazy.

Captain Sandy calls bosun João Franco back to the superyacht to help Colin untangle the anchor, it's not looking good.  It's also extremely dangerous, as the anchor and chain weigh a tonne each. They don't have the help of lead deckhand Travis Michalzik, he's down in the galley assisting Anastasia with lunch.

They're down peeps because Captain Sandy had to fire chef Mila Kolomeitseva last week for gross incompetence.  In the galley, Anastasia offers breakfast to second stewardess Aesha Scott to be met with a groan and "you make my fanny tingle."

Now, I've heard fanny referred to as both the front and the back privates, which does New Zealand-born Aesha mean? This seems very important, somehow.

The anchor is free! Captain Sandy directs Colin to the tender as she wants to keep João on board. Colin cannot start the tender. Check out Mr. Positive!

They finally get the anchors working properly, João tells us it's only involved a 4 metre move, which is approximately 12 feet. This is so the Primary Guest Daniel Funsch's daughter Ashley Brinton can shoot her "music" video.

Hannah and Travis sort of flirt in the galley over whether he wants to connect to her hotspot; he would, he would! She's had enough of dating at work after last season's mess with bosun Conrad Empson, hard pass.

But we know they'll be asea for awhile...

Ashley shoots her music video while (laziest ever) deckhand Jack Stirrup sneaks a smoke on deck. Colin asks if the slide is set up, it is NOT, Jack, don't lie to Colin! Slacker. João busts him on it, but Jack fits in well so he's probably fine.

João and Jack head for a break but there's no rest for the wanting to be tipped; Ashley and her videographer are moving to the hot tub area and will need help setting up. João races out there, good thing since Jack takes 10 minutes tying back his hair. What's the rush, he asks? The world isn't going anywhere!

Colin gets tapped to hold a reflector for the videographer, he calls himself the fluffer without even knowing what that means. Sure, Colin, that means you're a helper (with your mouth).

Jack works on his backflip while João watches, but makes the mistake of asking if João is still cranky about his total laziness. A slow fight starts, but again: Jack's one of the lads and it would be very difficult to stay mad at him, so I think he'll be fine. He's basically the English Seth Rogen for personality. How could you get mad at Seth Rogen?

Hannah coordinates with Cassandra, the videographer, they're going to put on a video wrap party after supper!

Anastasia has prepared burgers and fries for lunch, you'd think it was spaghetti by how the guests are freaking out over it. It is a massive burger, I'll give her that!

Poor Travis is being yanked all over the place, helping in the galley then out on deck, then back to run plates to serve. He didn't get much sleep either. You know who is all refreshed and pulling 1/8 of his weight? Jack. And he brags about this in front of Travis. Honestly.

Anastasia is making a Unicorn cake for Ashley, she's pretty proud of it.

The guests are having fun, anyway, go Primary Daniel Funsch and your "DanBod"!

The crew will be dancing to Ashley Brinton's song "Say The Word" hahahaha Travis's face is awesome.

Colin has a background in music, he takes over the instruction to explain that it's a four beat, not a three and even demonstrates. He DOES have swag! Where did that come from??

The guests dress for dinner as Anastasia readies the grub. I am always worried when I see them grilling steaks before the guests have been seated, but she could always microwave it, right?

Captain Sandy helps carry out the first course while Travis talks longingly of motorboating Hannah. He's digging the pencil skirts. Jack says some gross stuff about bouncing her breasts. I don't think this is the first time he's thought of it.

Aesha works hard in the cabins on turndown service, but they're covered in exploded suitcase, nobody's going to notice anything she does. Plus, another person would be a big help, too bad she's cooking supper.

Hannah is impressed with Anastasia and her food, which may not be as fancy as you would expect on a superyacht chartered for 6 figures for three days, but is excellent considering she has had no formal training.

I love that the guests are so appreciative, Ashley about falls off her chair when the crew perform their dance to her song.

She's only 17 and is shooting a music video, so yeah: she has a lot that other people don't. But she's coming across as appreciative and sweet, so I'm not gonna slag her.

Captain Sandy comes down to the galley to congratulate Anastasia, this is her calling! She needs some work on her knife skills, then the world is her oyster.

The guests crash before midnight so the crew follows not far behind, except Hannah who is working all night doing cleanup.

The guests are up super early, I love that! The crew is already working hard to make everything perfect, but Travis is flagging. He heads off for an hour break while breakfast buffet is served by Jack.

Hannah can't find her epaulets for docking, so she suggest to Captain Sandy that they say goodbye in their AB (Ashley Brinton) shirts, Captain Sandy loves it!

The guests love it too, they leave a "nice chunker" of a tip and who says that??

Time to turn the boat around, then tip time! Woooo!!

Captain Sandy starts the Tip Meeting with a stern warning to Colin: he should have been paying better attention to the anchor: once more and he's gone.She's kidding!

The guests left the biggest tip ever in the history of Below Deck Mediterranean, I'm thinking $20,000 but no! It's

You do! YOU NEED A CHEF! Get Ben Robinson in there! Captain Sandy has another chef ready to go, so she gives Anastasia the option: she can be chef or she can be third stew. What will she choose?

She chooses to continue as chef. Okay. Captain Sandy is very happy to hear that, she wants to support Anastasia's growth because she's an awesome leader.

Now we're going to get another third stew! Will it be an old friend? An old nemesis? Only time and Captain Sandy will tell!

She calls Hannah up to tell her the good news about Anastasia's promotion, Hannah is ecstatic.

Or whatever that was.

NOT that her food isn't good, it's just not good enough. This is not "cadet camp", Anastasia!

Travis will also be staying in the kitchen as sous/prep cook (that was my role!), does that mean João is gonna get another new lead deckhand (usually not actually a thing)? Nobody told Travis, by the way, he hears it on the radio with everyone else.

The interior crew meets up on the bow in bikinis, somehow that's where Jack ends up wiping down the boat without his radio. João is going to have to deal with this soon. In the meantime, Jack has drinkies for the ladies.

Jack comes back out onto the deck with a beer to find a very frustrated João wondering how to motivate this hooligan. He interviews hilariously about being a great leader for those that want to be led, er, João, you have to lead your WHOLE team, not just the easy ones. Otherwise it would be called Brews with Bros instead of work.

We get a super long shot of Aesha rubbing suntan lotion on Anastasia's bum, was that really necessary? It was to Jack!

Travis isn't impressed with João's treatment of (admittedly lazy) Jack, he would write him out a list of what has to be done and that would be more efficient, wouldn't it? Instead of just shouting that he needs to do everything from the bridge forward. When you give someone a list of tasks, you're assigning them a responsibility and people will rise to the occasion, more often than not.

*Remember when chief stew Kate Chastain refused to give any of her third stews "the list" on OG Below Deck? She legit went YOU CAN'T HANDLE THE LIST on them hahaha.

Everyone gets fancy for a night out, Colin jumps in with the ladies woooo! They shout "we're gonna eat a Colin sandwich!" and dance, so it's a good time even if that's not typically how you would eat a threeway sandwich.

Apparently you can drink in cabs in Cannes, France, cool! Shots and shots and shots later, Anastasia is talking about her added stress as chef while João rolls his eyes. He finally gets worked up enough to say something to her directly; countering her feeling that she couldn't say no. She should have just not agreed. Then he makes sure she understands that she's not a great chef anyway, so don't sweat it, honey.

Anastasia crumples into herself and leaves while João defends his choice to hit her over the head with the truth like a hammer.

Yes, she has a choice in what she does, João, but maybe she was trying not to be all "I AM CHEF BITCHES HAHAHAHA." I dunno. I do know you shouldn't shittalk someone who got a huge merit-based promotion, so there's that. We out! Cheers