It's time for our libidinous liquourpigs on Below Deck Mediterranean, who's ready for the glory of youngs imbibing far more than they should then blearily waiting on oblivious rich people? ME TOO!! Rolling Below Deck Med S4:E16 after the break!

We're mid-charter on Below Deck with our Primary Charter guests Jennifer and Patrick Kirk rolling among sub-par table settings, galley and turbulent waters.

Guest Deana Fritz can't even stand up inside, third stewardess Anastasia Surmava guides her outside to the fresh air while chef Ben Robinson struggles to keep his pots on the wall.

Bosun João Franco and I are more worried about keeping the tender attached, it's all over the place behind them.

But is that career really ever over? Really?

Captain Sandy Yawn finally turns into a quiet area where they can anchor and Chef Ben sends up breakfast. Captain Sandy must be working through some boat-envy issues from attending the Moroccan boat show; after spotting a nearby yacht with its slide out she sends the deck crew to take out ALLLLS the toys. Even the banana! 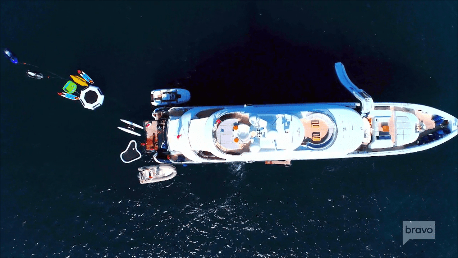 Lookit how bloody gorgeous that is! 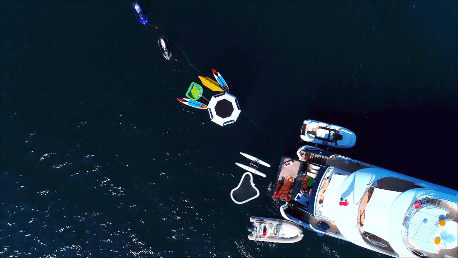 Chef Ben calls Bruno the provisioner for supplies for the evening's White Party, he loves a theme!

Second stewardess Aesha Scott suggests to Hannah that they do white makeup, but...but could they even get more white? Aesha asks Captain Sandy about performing white glove service, I bet that'll look fun!

Lead deckhand (is that a thing?) Travis Michazik hops in the tender with deckhand Colin Macy O'Toole to pick up eleventy thousand white balloons, Captain Sandy gives Travis kudos for his tender-driving over the radio. They had a little bonding moment the night before over his drinking, Captain Sandy has been sober for almost three decades and twelve-stepped him a little, gently.

Hannah and deckhand Jack Stirrup contemplate the nature of his relationship with Aesha. They've been snogging and sharing a bunk but no commitment or sex yet. Jack's thinking about asking Aesha to be his girlfriend, but they haven't had sex yet, so. He and Hannah decide it'll be fine.

The balloons are smuggled aboard under the nose of the guests, who are hitting the water toys hard. Until João's jetski dies towing them in a dingy. Laaaame. The other guests laugh while Captain Sandy gets pissed. It's literally João's job to make sure this shite is working. She dispatches Travis to rescue everyone.

Aesha brings up the white glove idea to Hannah, who is not down, nope.

Chef Ben is loving this white party theme, he's even got his white jacket on and everything! Unlike Hannah and her stews, who are rocking black.

Hey. Supper is at 9:00pm and at 8:17 the guests are more ready than the table, which is completely bare. Captain Sandy and I are not impressed. And again: WHY are the stews wearing all black? They have dress whites!

They do set the table and set up balloons, but Captain Sandy is still not happy. It looks lazy and minimal. Hannah has done much better in the past.

Jack and Aesha are so cute, he just can't believe he's had to wait this long for sex!

Chef Ben is very excited about this white food party! He even has Jack separate out all the white peppercorns from the coloured, he means business! Captain Sandy thinks that's awesome because she appreciates the extra mile he's making Jack go.

The cauliflower, turnip and cheese soup is sent up as the first course as Hannah bitches about having to remember four ingredients. Why won't Ben just do up a menu like a normal chef?

BECAUSE HE'S NOT A NORMAL CHEF, HANNAH, HE'S Ben Robinson, ya heard.

Ben Robinson is working very slowly on a very special risotto, there's a long time between courses with him. But they're always worth the wait!

Captain Sandy works with João on the jetski, she wants him to change the sparkplug but he doesn't think that's the problem so he won't. She thinks he's demonstrating a lack of respect, I think this is manufactured because João is super respectful. He's also right, it's not the sparkplug.

Jack doesn't care, he's working on his girlfriend proposal for Aesha. He wants Colin to write a sick rap for it, did you know Colin does rap recaps of each episode? I'm not sure...where, but I know he does! Ask the Google! He has a music degree and is amazingly talented.

I am so worried about all the red wine moving about with everyone dressed in white!

Travis and Jack wake João up in the middle of the night with a pretend nautical disaster, they're so funneeeee.

It's midnight and Colin is explaining docking to a guest, João is so proud of him! The guests all head to bed immediately after, they're a lovely bunch.

Final Day of Charter in Antibes! It's windy and gross so the salon is set up for breakfast. Ohhhh now I want Eggs Benedict! So do the guests, but there is no stewardess handy to deliver them until Hannah wanders in after serving shots.

Ben even serves some breakfast himself, in a T-SHIRT, then has to redo it again. Guest Deana is quite particular, so he works on round three of eggs for her and calls Hannah for service. Hannah is making White Russians (people still drink White Russians?? Were they out of Long Island Iced Tea?) and doesn't answer as Captain Sandy listens. Anastasia is finally called up for help while Ben and Hannah bicker.

Time for guest departure, wooooo up in whites! Show me the tip!! Oooh it looks thiiiiiiic.

The crew starts working on turning over the superyacht (which isn't what it sounds like) but Jack wants to get his girlfriend proposal out of the way. He paints a sheet and himself as Aesha talks to Anastasia about not wanting a boyfriend in yachting.

Tip Meeting!!! I hope it's big, the guests were super happy! Captain Sandy yells at João first for the jetski problem, then forgives him.

Kudos for Ben, then how did the White Glove Service go? Erm. It didn't...Hannah explains that she thought it was a bit..yuck and Captain Sandy is MAD. She yells at Hannah and says the interior crew is substandard compared to the deck and galley.

When Captain Sandy gets specific about having enough people on breakfast service, Hannah sticks up for herself at least but Ben backs up Captain Sandy.

The Interior crew meet in the crew mess, they got ripped a new one in the meeting and are regrouping. Even Anastasia who was so happy about her low-stakes job is upset.

Wow, we're onto the Pre-Charter Preference Sheet Meeting already? Nobody's even gotten too drunk yet! And this is the last one of the year?? I am not ready to give up this gang yet! Although I think they need some sleep asap, amirite?

Coming aship are Primary Randy Madrid and his girlfriend Nicole Who Doesn't Get A Last Name. They want two, count 'em, TWO theme parties, and they're super typical as expected. One night is Great Gatsby, the next is Moulin Rouge. Flappers then peelers, got it! Hannah vows to knock Captain Sandy's socks off.

Hannah calls her crew in for a meeting, she suggests they don't go out for crew dinner this evening and instead look for all the party decor they can find. Aesha takes a hard pass, she'll be going out with her fella.

Colin is dispatched to fetch Aesha, he brings her up on deck to rap at her then to see Jack's sign and Jack. She cries, okay maybe we all cry, stop!! They're very cute! She says yes through her tears, it's just the nicest thing ever!

Colin points out that João's never done anything like that for him, the bastard! Hahaha

The bros and Aesha head to town for a night out while Hannah and Anastasia search the boat for party gear.

Aesha and Jack split away from the group to have dinner by themselves while the boys head out and we watch Travis's wine glass very closely. I don't mean to, but I'm worried about the lad.

The boys complain about the interior crew. Ben would cut their sleep in half! In HALF! They don't get 10 hours of sleep, they get 8 from when they go to bed and screw you, Ben!

Everyone heads home by midnight, Travis even coherent and mobile on his own steam, yay! João's been feeling some sickness coming on, so he hits the hay as Aesha climbs into bed topless with Jack. On camera. You know, just blurring the nipples doesn't actually make anything private, right Bravo? Although, it's not exactly a hidden camera, so.

Then maybe sex? I dunno! That's what Aesha said!

João keeps Colin up most of the night with his fever, Colin tells him to the go the hospital but he won't, so Colin wakes up Captain Sandy. João is dispatched to the hospital and we're oot! Cheers!