Welcome back to this awesomely never-ending season of Below Deck Mediterranean! Seriously, no clue how many more episodes there are, so we're just gonna treat every single one as though it will be our last. Rolling into Below Deck Med S4:E17 after the break!

So, chief stewardess Hannah Ferrier is under the gun to provide some excellent party planning and second stewardess Aesha Scott just got wifed up with deckhand Jack Stirrup and now you're all caught up on How The Yacht Turns. Ready?? We've got new charter guests and two, count 'em TWO, theme parties to enjoy, yay!

Oh and bosun João Franco is sick, I forgot he went to the hospital in the middle of the night with a fever. NOW we're ready!

Erm. Aesha and Jack hadn't sealed the deal yet (WHAT WITH THE CAMERAS) and lack of being in a relationship, although living together, but now that he asked her to be his girlfriend in the cutest way possible: it was on like Donkey Kong. Apparently Jack's packing.

It's four hours to the last charter of the season, everyone is happy! Even João wants to get up an work with his virus and fever, but Captain Sandy Yawn is having none of that, fanks. Rest!

She calls lead deckhand Travis Michalzik up to the bridge to anoint him bosun for the day, he's down for whatever. He's very easygoing until he starts pounding the brews.

Provisions arrive and third stewardess and former chef Anastasia Surmava radios everyone to help bring the food into the galley for chef Ben Robinson. Including Chef Ben Robinson, who's not having that. 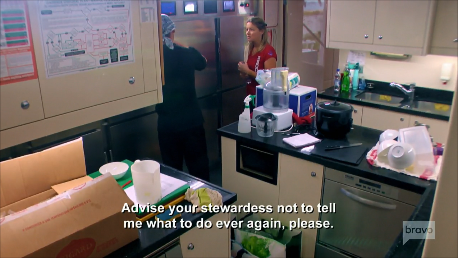 Oooooh Benny, which one? 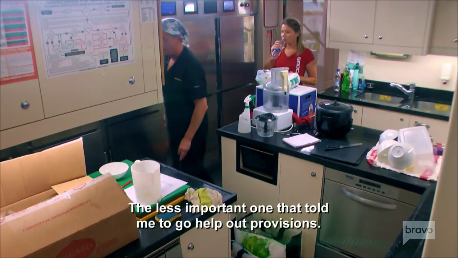 The "less important one" that you have been relying on for awhile now? That one?

We're heading towards winter in the Mediterranean, so the water is choppy and everything has to be put away in drawers. This next charter is probably going to take place sitting at the dock, given the size of the waves Captain Sandy is fighting through. That's good news for the deck crew, down a sick bosun, but it will be tough for the interior crew to keep the guests happy. Take out lots and lots of booze!

The yacht arrives in Monaco to pick up our guests, we get a little backstory while we're waiting. Ben Robinson backstory! We see loads of pictures of him as a young lad, he started out as a first officer. Awww look how cute he is??

Travis guides the yacht into dock expertly then Captain Sandy calls a Come To Jeebus Meeting in the salon. This is going to be a tough charter, no two ways about it. They need to pull out all the stops to keep everyone entertained.

Hai new guests whose names I will look up! Welcome to Sirocco, Primary Randy Madrid and your girlfriend Nicole Who Doesn't Get A Last Name!

There is one guest, Dan, who has caught Hannah's eye. He looks like Dan Stevens with cokebloat, pretty yummy if you're into that sort of thing. Hannah leads everyone on the boat tour while Ben prepares a fancy snack tray and the deck crew loads their luggage.

Ben's feeling the pressure of an interior charter looming, so he introduces himself to the guests and asks how they feel about snails. Not...friendly, nope! I love escargot, though, mmmm. Ben always makes me hongray!

Also hungry is Hannah, sneaking off to eat and leaving Aesha in charge of the guests. Aesha and Anastasia talk quietly in the salon while deckhand Colin Macy O'Toole takes guest drink orders by the hot tub. He calls and calls the interior crew on the radio, which is overheard by Captain Sandy and Hannah who runs out of the crew mess and up on deck with beers.

Captain Sandy asks Hannah a lot of pointed questions about service, ending with: so you asked the guys to keep an eye on the guests? Yes. Captain Sandy turns to Colin: did she ask you? No. YOUR LIES CHEAPEN BOTH OF US, HANNAH!!

Captain Sandy thinks the problem is that the stews are all hanging out as friends and not doing their jobs. Case in point: Hannah, Aesha and Anastasia are chillin' in the galley while Colin's upstairs getting towels for the guests.

Although I suspect producer shenanigans because I've never seen Colin just randomly wandering around near guests before, I have to wonder if the interior gang is losing motivation. Literally all they've done is stand around and talk about an upcoming trip to a dayspa.

Ben's HAD it, get out of the galley and go do something useful!!

Hannah serves drinks to the guests in the hot tub while poor João shivers his way through another bout of fever in his bunk. Colin's thinking he'll sleep in the crew mess to avoid the germs.

Day turns to night as the crew sets up for the first theme party, it's black and gold and not what I think of for Great Gatsby but Captain Sandy digs the effort!

The guests dress for dinner (the Great Gatsby meets Mary Poppins), then it's Showtime!! As Ben hunts for capers. He's serving snails and he's ready to make this guest a believer!

That's him mocking the female guest, in case you were wondering what the neck wobble was.

Everyone stares at Primary Guest's Girlfriend Nicole to see if she digs the snails, they're actually really good! Even with an inexplicable pizza crust on top.

Ben's not enjoying all the girly screaming and hugging in his galley while he's plating, eventually they'll quiet down.

Side note: I walk to and home from school in the company of ten-year-old girls, that's essentially what the stews sound like.

Ben's pulling out all the stops in this classic French multi-course meal, he's impressed absolutely everyone. Charter guest Dan is more interested in whatever Hannah's serving.

The next morning, Captain Sandy finds Anastasia setting the table inside, when the weather is beautiful outside...Anastasia is just not deferential enough these days, it's as though she thinks they're all friends.

The weather is so nice that they actually get to leave dock, yay! That means water toys and happier guests! Also perky is João, who's feeling better and all set to work. Captain Sandy doesn't want him to infect anyone and sends him back below deck.

Hannah tries calling Anastasia to make special coffees, but Ana's too busy taking a panoramic view of the cliffs, so...

The guests hit the water toys after breakfast while the crew cleans up and preps for the second party this evening. Charter Guest Dan takes another run at Hannah and her accent, he's so flirty!

Ben is aghast at how many breaks Hannah gives her stews, he thinks it undermines the hierarchy, which means there's no accountability leading to CHAOS! DOGS AND CATS LIVING TOGETHER!!

This is the last supper for this charter season! We're almost done! Ben's excited, Hannah's ready to be done and Captain Sandy is looking forward to rest. I assume, anyway, nobody said any of that but it seemed likely.

Aesha and Jack are super cute together but I am starting to get irritated at how they're always all over each other during work hours. It's not as though the interior should be coasting at this point, they're not exactly knocking it out of the park these days.

Travis scoots off to the dock to pick up the cancan dancers and Anastasia works on table decor. Most of the guests have dressed up in the manner of the theme, but we've got at least one guy in a t-shirt. Maybe he thought he was in the White Party episode.

Ben starts off dinner with a "deconstructed Caprese salad" but. A Caprese salad isn't constructed. It's slabs of mozzarella cheese alternating with slices of tomatoes, all drizzled with balsamic vinegar. How...would you deconstruct that, exactly?

I don't think anyone liked the salad. It mostly all came back. Hannah and Ben argue about when the guests want to eat their surf and turf, Ben would just like a bit of help, some support!

Sorry, Benny, you know I love you, but even I rolled my eyes.

Wow, steak and lobster going out of the kitchen all at the same time? What? And all cooked properly and served hot? What kind of Below Deck Mediterranean is this??

The guests LOVE the cancan dancers, almost as much as Captain Sandy, who calls it mind-blowing. Well. Okaaay.

Hannah liiikeeesss Dan. And he liiiiikkeesss her. He's coming up for a whiskey rocks before bed all by himseeeelffff. He's also half in the bag, so all of Hannah's innuendos don't land immediately. He does manage to say he's seeing someone and Hannah and I lose interest, just like that.

João wanders out and breaks up the flirtsesh anyway, but it was over anyway.

I know this is the end of our charter season and I if I never ever hear Anastasia's babyvoice whining again, I shall die happy.

WHY DID WE JUST SEE JACK SCRATCHING HIS BUMHOLE ON NATIONAL TV?? Why, Bravo??

The deck crew is up before 8:00 am setting up all the toys, Anastasia is not setting the table but rather aging paper to look fancy. Captain Sandy tells Anastasia to wake up the whole interior crew to get that damn table set.

Anastasia sets the table while a bleary Hannah parries blows with Captain Sandy. Captain Sandy is just getting more and more irritated, leading to Captain Sandy losing it in the galley. We're out!