Wow, it seems like we were on Below Deck Mediterranean just on charter with the Footes, where did the time go?? I have every single appendage crossed that Chef Kiko pulls through until the season is over, but it's not looking good according to Captain Sandy Yawn's face. Let's find out what happens after the break in my Below Deck Med S5:E10 Closing Time recap!

We're still in the galley with Captain Sandy Yawn and our poor flailing Hindrigo "Kiko" Lorran. He's completely given up, calling himself a failure and marking tomorrow as his last day.

He can cook! He can cook fancy, he can cook lots, he COOKED A 72 PLATE DINNER A WEEK AGO. The man can do the job, now back the fuck up off his junk and let him cook!! All this micromanaging and not supporting him has undermined his confidence to the point where he's thinking, not cooking. STOP DOING THAT.

He tells his biggest fan (except MOI) chief steward Hannah Ferrier about Captain Sandy's feedback and the fact that he's surely fired the following day, she handles it even worse than he did, crying out on the deck in anger.

Hannah's right at the end of her rope, mentally and physically. She tried really hard to help Kiko, that backfired and now she's just donnnnneee.

Hannah works to regroup while Kiko retires below deck to tell everyone else that he's being fired and the rest of the Interior crew keeps the Las Vegas party rolling. Second steward Christine "Bugsy" Drake draws abs on would-be stripper and deckhand Alex Radcliffe, awwww, she used a Sharpie. Enjoy that happy nipple for the next 3-4 days!

Deckhand Pete Hunziker, aka "The Unit" and Alex will be topless dancing for the guests, bosun Malia White is there to do...handstands? Acrobatics? Hannah glumly washes dishes while the guests make it rain and Kiko cries himself to sleep in his bunk.

Third steward Jessica More is almost crying about Kiko too. It must be said that Bugsy gives not one shit about Kiko going or staying. Hannah goes to Kiko's bunk to commiserate, he doesn't know how he's going to be able to cook breakfast tomorrow. She says she'll get up and help, they have real love, a real friendship that I can see lasting long beyond this season on Below Deck Mediterranean. In jobs like these, you make friends fast because you're under fire, under all the pressure and working in close quarters besides. You either love or hate people passionately.

Kiko is still crying when deckhand Robert Westergaard comes to bed, he's saddened as well by the loss of such a person.

Hannah is woken up at 4 am by a panic attack, Malia checks on her and is asked for Valium, but you need a prescription for that. Hannah says she'll be alright in a little while and she does go back to bed.

Everyone else is up at 7, Captain Sandy checks on Kiko and here's where I start getting mad again. Captain Sandy is an excellent leader. I dig her management style and I always have. HOWEVER, she's not supporting Kiko at ALL and keeps saying he's not capable of doing the job but shucks, she sure likes him. He can do the job! He needs his Captain supporting him and not circling, waiting to pounce on anything substandard. The guests weren't even mad! But she was, and Kiko has nothing left to give.

Kiko gets about halfway through prep for breakfast and realises he can't do it. He packs his knives, he can't work like this, he can't serve anybody.

Kiko does not leave the boat, he goes back to bed. What? They're docked, he could just leave...instead of getting into his bunk...That's where Captain Sandy finds him, is he going to cook breakfast for her? Fortunately, all the guests but one are sleeping still, she manages to talk him into finishing this charter with her, cooking HIS food, not that crappy Vegas-style stuff.

Kiko cuts himself while talking to Hannah and the deck crew guides The Wellington out of dock to this beautiful location. 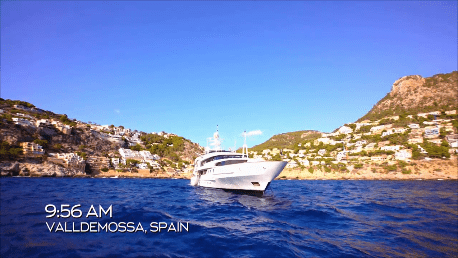 Malia tells Captain Sandy about Hannah's middle of the night panic attack, or at least about Hannah being upset, so Captain Sandy calls Hannah to the bridge to talk about it. I disagree with everything that is happening here.

Jessica and Rob take the guests to a lovely little place for lunch, the guests are allll over them as a couple. Hahahaha the guests take a picture of THEM. 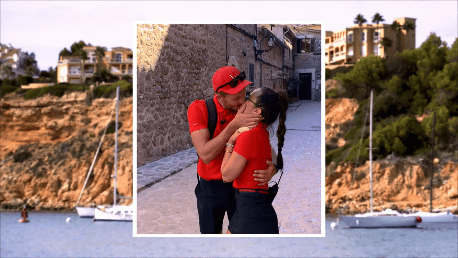 Captain Sandy is on the phone to her recruiter looking for a new chef, it's a testament to how much I like Kiko and how unfair I think everyone is being that I'm not even stumping for Chef Ben Robinson to return, the cheeky monkey.

Alex and Bugsy flirt in the galley, I wonder if they'll ever really hit it off. I didn't realise Alex is only 23, he's just a baby, maybe that's why he hasn't actually asked her out and instead jokes about asking her out. Jessica and Rob have their own lunch within earshot of the guests, who immediately toast to them, or JOB (Jessica-Ob).

They make out in the corner, Jessica invites Rob home for Thanksgiving and he's 100% in.

Then he tells her he loves her and there's an audible record scratch. What?? They're not even really dating! More like canoodling in small spaces!

Tonight is the 90's hip hop party, Malia calls her boyfriend Tom then sets about writing a rap for the guests. It's definitely going to be awkward given that Primary Sean Foote actually owns a record label, but guests always appreciate the personalized effort.

The guests are ready to come back to the superyacht so Malia and Alex run over and grab everyone in their giant tender.

Two of the guests want to hit the jetskis, Rob's supposed to be watching one particularly high-flying water toy but his head isn't there. He's worried about things changing with Jessica after he said "it." She's not communicating and it's because she's scared of falling in love and getting hurt. Those are hard things. I had no idea how hard.

Rob is really supposed to be up  on deck, but he's still downstairs with Jessica, and Malia keeps calling. C'mon! You're on shift, fella! Get your poop in a group!

Jessica wants to say it back to Rob, but she has trust issues. Her parents broke up when she was really little and moved to opposite ends of the United States to be as far away from each other as possible. I can't imagine caring that much about where any of my exes are.

Kiko is still sadly chopping the same yellow peppers we saw earlier, how many yellow peppers do you need in a day? He would like to be working as though he had another chance, but since he absolutely doesn't, his heart isn't in anything. It's hard for him to get chances in his life. He cries as he tells us he wants to kill it with his food and man, he's killing me.

The guests jump in the hot tub while Captain Sandy orders pizza for the crew so as not to bother Kiko and everyone else sets up for the hip hop party.

A last minute twist has Hannah calling Pete up on deck, she needs him to find a cake while picking up flowers so she can hide a guest's engagement ring in it for a last-minute proposal.

Bugsy has made a special table for the night and even ripped her own tights. I'd say Primary Crystal Foote has a slightly better grasp on a 90s look with her giant gold hoops and top made out of netting. I like guest Corey Graham's thick and twisted gold chain and hat, very RunDMC!

The guests love supper, they want to see Kiko to say thank you for the excellent food. Oh I hope he doesn't cry. They shout and holler for him, lavishing praise on him and I cry instead. He really is an artist and I hate that Captain Sandy hurt him with her lack of faith.

Oh and then charter guest Karen gets engaged with cake and I'm crying again. COME ON.

Ah, the rap is exactly what I thought it would be. I mean, props for writing a rap but maybe learn it instead of holding the paper an inch from your nose.

The guests have an awesome 90s party, not even staying up that late but having the best time ever. Then everyone is off to bed for a quiet wake-up on the last day of charter.

Just one more meal, Kiko, you got this.

Jessica takes breakfast orders from the pajama-clad guests without writing a single one down, but she kinda remembers!

I KNEW Malia's chef boyfriend was gonna get snagged by Captain Sandy, whatever Bravo, what.ever. She asks Malia for his resume while I roll my eyes.

Malia leads the boat into dock expertly, Primary Crystal tells her she even looks pretty while she's doing it! Lol, well. She does!

The guest luggage is loaded and we're ready to go! Kiko stays for the goodbye but won't stay for the Tip Meeting (even though that's the best part), asking Hannah to grab his portion. He doesn't need to hear what Captain Sandy has to say about him again.

Primary Crystal gives a really nice speech and cries as she leaves, Hannah points out how different the guests' experience is from what's happening below deck. They walked away with nine new friends, they don't even know one of their new pals got fired in the middle of their dinner service.

Kiko does a round of goodbyes to everyone but Captain Sandy and that kind of makes sense. Hannah cries on the dock with him, she doesn't want to continue on this boat and it's written all over her body. He leaves and we've got two days left to find a chef! I'm so sorry to see you go, Kiko, you are an excellent chef and you deserve a great chance. I hope this helps you land THAT one!

The previews for next week are interesting, looks like we're going to see a whole lot of Jessica, meet Malia's boyfriend Tom and find out who brought drugs on The Wellington. Dun dun DUNNNNN.

Until next week! Cheers! Check out the audiocap of the this recap if you like to listen to what you read and watch. That's probably a thing, right? Like maybe.