We're back mid-charter with a buncha rich dudes on Below Deck Mediterranean, so same as ever, right? Perhaps no! Maybe we also have an extremely cranky chef on board that doesn't want to cut up cucumbers because he's an ARTIST maybe. Let's find out in my recap of Below Deck Med S5:E17 Something's Fishy after the break!

We're back in the kitchen with pissy chef Tom Chekkets complaining because his snugglebreak with girlfriend Malia White was cut short by GUESTS daring to want FOOD, in the shape of cucumbers with olive oil.

Technically, he's right, stewards Jessica More or Aesha Scott should have been able to handle this by themselves but they're currently getting juijitsu lessons from the guests so they busy. The guests grabbed Captain Sandy Yawn anyway, that's partly why Tom is pissy, because he can't yell at her. Instead he's taking it out on poor Aesha, who's soon in tears.

Aesha talks to her chief stew Christine 'Bugsy' Drake, who gives her a hug and will probably talk to Captain Sandy about it.

Orrrr she'll talk to Tom like nothing's wrong about supper. One of those. That's kind of shitty. By that I mean all the way shitty, Bugs.

Supper is set for 10 pm, since the crew lost at Ultimate Frisbee they are all decked out in stuffed Speedos (and a couple of cucumbers), which is waaay better than the bikinis Primary Eric Cottson is expecting.

Supper is also late thanks to Primary Eric, who makes everyone wait while he douses himself in toxic levels of Axe bodyspray.

Tom gets pissier and pissier in the kitchen, he only came on The Wellington for Malia! And if he's going to be pissed off around her, what's the point?

(Anyone have a status update on whether or not they've followed each other again on Instagram??)

The guests are finally ready for dinner at 10:30, they love the crew's Speedos! Much photo-taking commences while Malia soothes the beast in the kitchen. She's feeling guilty AND responsible for having Tom on board.

Jessica finishes the cabins early and heads to bed, I love that the guests roast Malia for not showing leadership in face of the crew's frisbee loss. It must be noted that they said earlier that she would make an excellent captain, though. So. Balance, fine, whatever.

I still am working through the whole Taking Pictures In Hannah's Purse thing.

The guests luuuurve Tom's food, he's certainly coming through with the goods even if he's driving the crew up the wall getting there. (That was not a mixed metaphor lalalalalala I can't hear you lalalalala)

Since Rob and Jess are both off during service, they head up to the bow for a cigarette together. By that, I mean she climbs on top of him and they make out within earshot of the guests who are losing their collective shite over how good the food has been.

Malia finds them up there, telling us that Captain Sandy would have fired them. Neither one is in uniform and the guests are awake. What are they thinking?

The Nauti (Naughty) Supper (with underwear hanging from the ceiling) ends with remote vibrators being handed out for all; but. Never mind. It's all good. Whatever.

The guests head to bed relatively early, yay! Everyone's up at 6:30 in the morning, a slow day is planned. I'm happy because the guests are up too, yay! It seems like such a waste when they sleep away their last few hours on the superyacht.

It's so, so quiet in the galley when Captain Sandy and Tom are in there alone. You could hear crickets over all the not talking. She throws out a little smalltalk, he answers without any appreciate effort and yeah: you can't freeze out your boss coz you're mad at her.

Also: I saw Captain Sandy's face on a bus in my little city in BuFu Nowhere, Canada, that was tripppppyyyy. Captain Sandy, did you know your FACE is literally everywhere???

Jess carefully asks Bugsy if it's okay if she and Rob "sleep" in a guest cabin tonight instead of partying with the crew?

I can't tell which is worse, Jess and Rob getting along or fighting?

Malia's mom is in Spain, she's there to watch Malia dock the huge superyacht! Well, presumably to do more than that, but also that!

Tom sends out an excellent final meal for the guests AND apologizes to Aesha. Awwww!

Malia's mom watches closely as Malia leads a smooth docking, aww! She knows Captain Sandy too so hugs all around!

Then it's time for guest departure, I really didn't get a sense of dese guys, you know? They liked the food, the Primary was...okay? I dunno! Until they leave and Eric Cottson invites everyone to his Malibu house instead of giving them a tip. This is after praising their service. He STIFFS them!

Nobody knows what to think. He walks away fast as Captain Sandy and the crew stare after him in disbelief.

Well. You saw he was an entrepreneur, right? I mean.

Oh and a joker!

Guys. That was next to his sweaty wobblies...

Malia's mom comes aboard for a tour, Malia has five brothers! FIVE! No way she was spoiled as the only girl, huh? 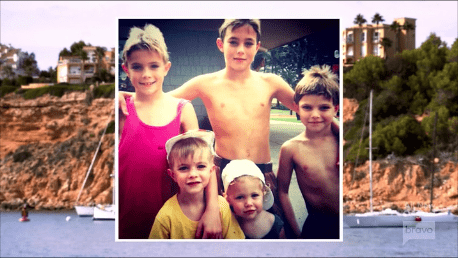 Time for what used to be the best part (until they RUINT it with constant drama, I can't even get a good moneychub on!), our Tip Meeting! I shall guess $18,000 USD based on nothing and estimate exactly four minutes of unrelated dramz.

Captain Sandy gets right to the dramz by addressing the Tom-shaped anger elephant in the room: everyone is tired and cranky, this is the penultimate charter and hey, Tom, weren't you mad about cucumbers or something?

ooooooooh. Captain Sandy setting Tom straight as to his role on the boat and level in the hierarchy in.front.of.everyone. Dang. Nicely played, CapSan. It's true what she says about Tom's break, how would she know he's just gone down for a break? She suggests he write it on the board so she knows for the next time.

It's 2:00 and since they're turning the boat around tomorrow, they've got to hit it hard this afternoon. I wonder if anyone will even go out? I mean, we know Rob and Jessica have other plans, but what's going on with Bugsy and deckhand Alex Radcliffe? We've seen nothing all episode of my new favourite couple!

Okay. Jess and Rob have been dating for three weeks, they totally lurve each other

and haven't had sex

In fact, Jessica hasn't had sex for two years.

I am horrified and fascinated at the same time that you and I and the whole world knows this. I have questions!! That I have no right to ask.

We're in the crew mess with Captain Sandy, Tom, Malia and Bugsy for a pre-charter meeting, wooo! We've got an all-girls trip coming (that I'm positive is actually full of women) headed up by co-Primaries Hannah Yu, Zaida Brown and Erin Grace. I am totally guessing on the spelling of those names as Captain Sandy was stingy with the screenshots. I did see the names Mariette Frey and Lacey Dea! The co-primaries are stay at home moms, maaan. I used to be one of those. Amaya Hill and Nicole Holtmeier do not look like the SAHMs I used to know.

Everyone but Ron and Jess get ready to go out, awww, lookit this?!

Alex points out at dinner that half of everyone at the table wasn't there in the beginning, that seems crazy to think that Jessica is the OG of the Interior crew. Aesha makes it awkward by asking if anything is different during the day between Bugsy and Alex, why mess with them, Aesha??

Bugsy plays it off, but she's just super awkward. Alex is looking SO CUTE right now and listening to him talking about how he likes Bugsy a lot is just so sweet! So sweet!! She doesn't know where to look, Malia thinks this is her rejecting Alex and I think I speak for everyone when I say: STAY THE FUCK OUT OF IT, MALIA.

Wow, I so totally do not want to hear Rob talk about tantric sex and do you think Sting knew that he and Trudy Styler would be forever associated with it? For the rest of their lives and probably beyond? I didn't need to hear Jess have at least one orgasm either, but here we are.

I need a shower for my brain so I can think about my life choices.

Everyone is up early the next day for final boat shining before charter, Tom is making...naan? Are those naan breads? Can't be, not that early in the day.

Since there's one whole charter left, Malia decides to name a Lead Deckhand again. We haven't had one since deckhand Pete Hunziker got demoted for being a dbag; we've since lost him almost entirely on our screens after an Instagram post that was apparently racist. I haven't seen said post (like I'm going to follow The Unit) but it was enough that he completely disappeared in the edit.

ANYWAY. Malia has to name Alex as her lead, he's excellent and who she's been leaning on for checks and that type of thing.

Captain Sandy gets a text from one of the co-primaries, they're coming an hour early! Tom is ecstatic, of course.

It's 9:30 am, guest arrival is now 11:00 am and provisions have just shown up on the dock. Guess who's not happy with the temperature of the fish that arrives?

Honestly, Tom, if you spent half the time on solutions that you spend on trying to prove you're right and someone else is wrong, you'd have the world at your feet. Instead of us watching you and your stupid thermometer stuck in a dead fish trying to prove that it's too warm. Call them! Order more fish at their cost! Just get MOVING.

Tom sends Malia to find Captain Sandy for him while he calls the provisioner, Captain Sandy does not like Malia being sent as messenger one little bit.

Captain Sandy comes to the galley and calls the provisioner (which Tom was not doing), they agree to send some more food but it doesn't matter because Tom's flipping out about the state of his galley, which is covered in the rest of the provisioned food. He keeps calling it unfair and DUDE. There are six people right there waiting and trying to help you. Calm the haitch down and fix this! You have time! Just stop complaining and do the work!

He does not, and Captain Sandy takes Malia out of the galley because Tom needs to come directly to her if he needs something. Malia says Tom's about to walk off the boat, Captain Sandy is fine with that, but not Malia translating Tom's hissy fits into something palatable. Captain Sandy seems to understand the animal she has now, and she's letting Tom buck.

That's where we leave it for this week! We haven't even met the next (and last) set of charter guests for the season, boooo! Until then, cheers!