Good afternoon yachties, who's rolling Below Deck S5:E03 Jesus Saves?? ME TOO! I took a hiatus as BD was seriously bumming me oot, but I had to come back for adorable Bruno Duarte. Rolling after the break!

It's 22 hours before Charter Guests arrival and everyone is scrubbing the boat down to get ready for their arrival. Well, ALMOST everyone, deckhand Chris Brown went pretty hard the night before so is sleeping it off in his bunk as Lead Deckhand Nico Scholly calls and calls over the radio. Guess who's listening to that radio? Not Chris, but Captain Lee Rosbach, who wants to know where the Sam Hill Chris is that he's not answering multiple radio calls. Nico has to search the entire boat before finding Chris passed out in his bunk.

That was the first charter, Chris Brown, keep it together!

Chief Stewardess Kate Chastain has her own staffing challenges, but she's planning to train the other stews today AND tonight, when they will be serving Captain Lee and her supper.

Green deckhand Bruno Duarte is working his ASS off, seriously, he's all over the place. Deckhand Baker Manning is in there too, they're getting it done without Chris's help.

Day workers show up and start cleaning the guest rooms so Kate can teach the interior staff everything, and I do mean everything. They didn't know where the dryer filters were? I'm sorry, third stew Jennifer Howell is not only super green, she's also still creepy af. This is her ironing

She makes jokes to herself then Kate and I do this

Pre-Charter meeting in the mess! John Ealy from San Diego and his five male guests will be enjoying a seafood fest including sushi the first night, then a tequila-pairing dinner the next. Since John Ealy is a restaurateur, Canadian chef Matt Burns has allllls the trepidation. Plus, he doesn't know sushi.

Kate is ready for the crew to serve her and the captain supper, her heavy southern accent is making me pee: "What's a girl gotta do to get a drink round these parts?" This is like a fire drill and Kate is the fire. Over 20 minutes she waits for a drink, that is not okay. Second stew Brianna Adekeye already complained that she has experience and doesn't understand why she's being tested: 20 MINUTES FOR A DRINK IS EXACTLY WHY.

Jenn delivers the drink "with your bare hands. LIKE A CAVEWOMAN" and I think I'm going to have to finish recapping this in the bathroom because this is some of the funniest shite ever.

Chef Matt is sweating the expectations of these upcoming charter guests, but Kate's not sweating anything, she found a Hot Jesus on the dock and she and Morton are gonna hang out later.

Two hours before charter, Captain Lee gets a call that his first mate Steve is sick, so legally the Captain can't leave the dock. He comes up with a story about a mechanical problem for the guests (why? Why lie?) and blames it on the deck crew being too green to risk it. Um. You JUST said it was illegal, you don't need to get emotional about it, Cap.

Nico takes it personally because of course he does.

The guests are here! 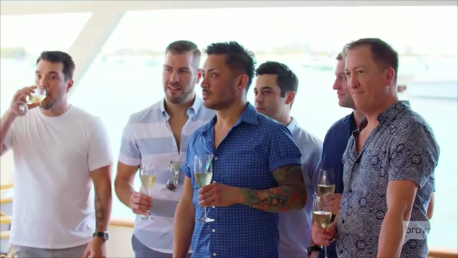 Captain Lee breaks the bad news then it's time for a boat tour! I love these guests, they're totally my tribe: gay, sassy, catty, hilarious. They'd like a side of Bruno, peez!

I kind of love that Bruno hasn't been pigeonholed here, he's totally gay as is his smoking hot boyfriend but that never comes up and why should it?

The guests enjoy some water toys and make me wish I was with them, anyone who says "slow it down, sister!" to Captain Lee is my new hero.

Matt's round of food for lunch is well-received, whew for him! We get another First Mate, Nick, just as a guest is complaining about how unprofessional it is that they didn't do a boat check first.

That's what I don't get, Captain Lee blaming it on a mechanical error makes them look amateur, saying they have a sick crew member that they're waiting for a replacement for makes much more sense.

Matt struggles with supper, practicing affirmations as he goes, he can do this!

Kate comes up with a great idea to help Matt with his sushi, it's all about the presentation. Let's put the sushi on Bruno! YES LET'S DO THAT. Nico helps Bruno stuff his pouch then

Kate bails after supper to go to church with Hot Jesus, leaving Jenn to deal with these increasingly drunken guests.

They're all in the kitchen with her, they're fondling the equipment, they're carrying on like a bunch of frat boys and Jenn does her level best to keep up, but they're running drunken lopsided circles around her.

Kate and Hot Jesus are at second base.

I absolutely love that Kate went out, saw a guy she liked and sealed the deal within hours, that's awesome. She's single and knows what she wants, I dig that. BUT. She's on charter, dude, I'm pretty sure the crew aren't supposed to do that.

The next morning, it's time to leave the dock finally and Bruno does great! Captain Lee has noticed. He likes Bruno's steady work ethic but notes that Baker gets flustered.

Matt shares his menu for the tequila-pairing dinner with the guests; they do not think Eggplant Parmesan is a good choice to go with any kind of tequila at all. A guest questions Matt about it then Brianna helps him come up with a better choice: Spanish Rice with fresh Snapper. The guests are much happier.

Chris helps Matt with the tequila-pairing, Chris is the booze whisperer aship and Matt takes full advantage of his knowledge.

Kate and Jenn are funning in the galley while Primary John Ealy and one of his guests tease, are they getting along right now? Kate's "She sucks at her job but she's hilarious" makes us all gasp.

IN FRONT OF THE GUESTS?

In front of the guests that Jenn just spent the last 24 hours catering to while you were praying at the altar of Hot Jesus?

Jenn is pissed and you can tell, I'm glad she doesn't play that off in front of the guests.

The guest love Matt's supper and go to bed early, they raged hard the night before and maybe now it's time to enjoy the beauty of the boat. And those bathrooms are epic.

I want to be on this charter with these guys!

It's time for these awesome dudes to leave and that means it's almost Tip Time! I have high hopes because, thanks to Bruno and Jenn, these guys had an awesome time. $17,000, which means $1,645 each, that's great! Woot!

Captain Lee gives the crew a night out, but warns everyone that anyone caught napping after is going to end up packing their bags *hardeyeatChris*

It's not Chris getting drunk and embarrassing himself tonight, however, it's Jenn! She falls immediately then proceeds to drink every single shot she can find, ending up in the bathroom screaming out for Kaaaaate, who is busy at the bar with Hot Jesus Morton, who is very, very hot. Think Viggo Mortensen when he's not in one of his starving roles.

That's it, we're out and I'll get caught up just as soon as I can! It's interesting that Brianna is the get this season, there is always one female crew member that the boys settle on and fight over lately and this time it's her. Brianna is pretty, but...kinda vacant? Do you agree? Hit me back in the comments.