Hi guys! Welcome back to Below Deck which is not...really...holding my interest this season thus far. However! I have faith in Kate and I shall roll with her until it gets good because you KNOW it will. Recapping S5:E2 after the break!

So, we're on the beach with DaveNoLastName (boooooo!!! That's one of my favourite parts!) and his gang eating lunch while steward Brianna Adekeye tries to get an Oreo in her mouth by rubbing it all over her M.A.C. forcefield first. Hard pass.

Chief stew Kate Chastain is back aship complaining about the laundry room (cue a shot of Brianna walking past all the loads of dirty linens) but our Lady o f the Yoga Matt isn't the only incompetent this season. Deckhand Baker Manning has no idea how to run any of the water toys.

She's got these "dang seabobs" to figure out and boy howdy, they sure are complimicated!

Captain Lee Rosbach has these "dang morons" on his deck crew, too.

but Kate's pretty sure she's useless with two good wrists anyway so she'd like Captain Lee to get her one more good stew, pleez.

Extremely attractive (if you're into muscled, friendly guys with constant smiles) deckhand Bruno Duarte is over this whole learning knots business, HEY, they're looking for someone inside, Bruno! Get in there! Interior! Interior! One of us! One of us!

Lead deckhand Nico Scholly thinks the crew is embarrassing, but I'm pretty sure as their boss you could be doing something about that.

Kate's not having much more luck with her crew, but she loves Canadian chef Matt Burns.

Brianna does not understand Kate's leadership style, which is to start off by explaining what a washing machine is and why dirty clothes go in it. Brianna's "are you asking me or telling me?" gets a "which one do you need?" from Kate and a whajbsjbhhahhahahhah from me.

In case you were wondering what Canada looks like in action, we getta see deckhand Chris Brown talking Matt's ear off during service. Matt's irritated that Chris is breaking his pre-gaming prep quiet time with his incessant chatter (about absolutely nothing) and you can tell that because Matt says absolutely nothing then suggests after a long time that they wrap up.

Matt's struggling a bit because he has to pair his food with...Mountain Dew. What, are these guests secretly 14 year-old gamers? Should Chris be locking up his skin mags?

Captain Lee takes Nico aside to explain that Chris and Bruno are not allowed near anything resembling a rope, Baker is worthy of being taught aft. Wow.

Nico lays it out brutally for Bruno: he's not catching on fast enough and Nico isn't there to be his cheerleader. But...you're his boss, if that's what he needs to be motivated, why wouldn't you? Some like the slap, some like the tickle but either way: you still have to get 'er dun.

Speaking of motivating, Kate's "helping" third stew Jennifer Howell (of the side curl and baby voice) by timing her getting tea for a guest. 7 minutes isn't bad, you gotta boil water and everything!

Baker and Nico visit while she works on deck, she has money to keep gas in her RV because her dad died. I'm sorry you lost your daddy, Baker.

There must be something in the air, because Nico wakes Matt up in the middle of the night to talk about losing his best friend, his brother only two months before.

The next morning is the last morning of the charter, the guests want to make it memorable: sumo time!

And time for everyone to go! Bai DaveNoLastName! Wait: is that a tip in your pocket or are you just happy to see Captain Lee? 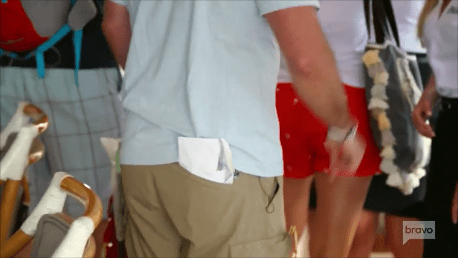 Boat clean time! Jen's finally figured out that Kate is laughing AT her, not WITH her, but she thinks it's fine. Probably. She'll be the idiot, then she'll make Kate the idiot, yeah, that's just not gonna happen.

Kate does not suffer fools gladly, which makes her not an awesome leader, really. She's always making fun of her (super incompetent) staff or making comments they don't even understand, which is entertaining AF, but not great to work under.

Matt's made lunch for the crew and just as Bruno plans to dig in, Nico rudely suggests he go help the chef bring down the rest of his stuff instead of plating lunch for himself. Bruno and I don't understand why Nico is being so rude, they're at work, why be so nasty? Bruno hides in his bathroom while Brianna tries to tempt him out with lunch.

I'm pretty sure Bruno is crying outside while washing the dinghy (washing.the.dinghy) when Chris comes to help, he just doesn't like the disrespect. Chris is surprisingly rational, yachting tends to attract this type of person: not jerks as Bruno suggests, but loud people with strong opinions who know what they want to do.

Last time: Bruno, they're dying for someone who can mix a dirty martini properly inside: GO.

With the help of actual yachting people (non-camera-friendly staff), they dock in port, time to clean it and flip it, folks!

Tip meeting first! I don't know what's wrong with me, I didn't even care about the TIP! It's $15,000, $1360 each but Captain Lee warns everyone that nobody will be skating by any longer.

Captain Lee gives everyone the night off but can't resist dad-ing them on the way out: he'll be sweating all that booze out of them tomorrow!

I can't stand to listen to Chris talk, y'all. I can't take hearing about his celibacy because he claims his whole life as celibate and I don't want to know about anything you have to say because it's all under those eyebrows, isn't it? It is.

Chris likes Brianna, which means that Brianna and Nico will bang or play Just The Tip later this season.

Kate sends her stews to open and look into every drawer and cupboard on the yacht, time to find out where the tea is, ladies! Jen thinks about how sexually frustrated she is super...duper...slowly...while Brianna tells us that she's not messing with Nico, nuh uh, she's not getting involved with anyone who's involved which I like to call the Angelina Jolie of answers.

Dinner time! Everyone gets purty while Chris shows off his arse and Brianna reassures adorable Bruno that he's good with his nipples out. Chris pouts at dinner because he isn't right next to Brianna so he's gotta make an effort or something. Booooo

This crew has no CHEMISTRY! They have no PERSONALITY! Kate's there looking fabulous and wry but she can't float this boat alone, you guys. Maybe some shots will help! Matt sips red wine (coz us Canadians are kinda buzzkills) while Brianna and Nico talk about their one drunken shared cab ride in Barcelona. Her hand is on the crook of his elbow for no reason.

And then Jennifer gets herself off at the table.

Yep, you read that right. Without touching, she can just get herself off by making stupid faces and swallowing her lips. Sah hawt.

Matt's now drunk enough to talk about Bri's "balloon knot", I dunno, Canuck. Trying too hard is a bad look.

Aww, but Nico and Bruno make up after Nico makes some profane overtures in Bruno's direction, good job for giving a shit indeed!

Some drunken shenanigans later, Matt humps...Jen? While dancing? Everyone looks weirded out but it's always those quiet ones! Chris kinda makes a move on Bri, tickling her back means she is so gonna ask her mom to drive you guys to a movie for SURE.

He corners her in the galley back on the boat, saying enough awesome things about Matt that she has to ask if he's gay. Now for the hugging! So awkward.

Some more souless banter in the morning and Chris sneaks back to his bunk to sleep it off. Which is exactly when Nico wants him, calling repeatedly over the radio until Captain Lee answers. Whoops.

And we're out! Until next time, y'all!