I can't believe Below Deck is back already, right after Below Deck Med ended!! That's just excellent planning, Bravo! I actually missed a season for the first time, so I'm looking forward to seeing what chief stew Kate Chastain and Captain Lee Rosbach have been up to! Rolling into Below Deck S7:E01 after the break!

I'm conflicted about the location, which is Thailand this year. It's just that. I know quite a lot of young women who've gone there for the beautiful location and all of that, but also. Old men. Do you know what I'm talking about? So, I'll be keeping a close eye on the guests this year, ya dig?

12-year-old chef Kevin Dobson swears he's been a chef for 15 years, which is impossible given his age as noted above ^^. He warns us that he comes across as cocky, so let's prepare ourselves! 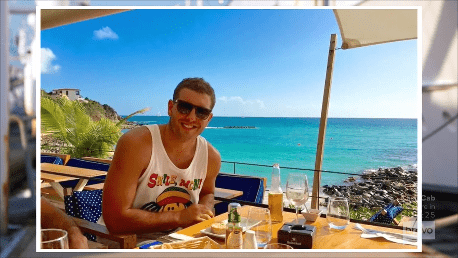 Simone Mashile must be the second stew, but they're not ranking for us, apparently. Whatever. Mostly she dances a lot?

Then we have blonde Courtney Skippon, who must be third stew because she has a baby voice and also:

Deckhand Brian de Saint Pern has one of those rockhard gym bodies, so you know we'll be seeing it all season. Kate calls his Davids an aggressive "penis ravine" and she's not wrong. He's there to party!

Also here for a good time is deckhand Abbi Murphy, a hawt redhead with incredible colouring.

Rounding out our deck crew is Tanner Sterback from Long Island, or a FLID as he calls himself.

Hey he said it!! Not me!! I don't even know him! I might be agreeing with him because he tends to talk in acronyms, like, out LOUD, but whatever. I'm sure he has redeeming qualities.

We're back aship Valor in Ao Po Grand Marina in Phuket, Thailand! It's beautiful, but also 94 degrees Fahrenheit, which is 10 degrees above which I burst into full flame. Captain Lee Rosbach waits on the bridge for the crew to arrive, starting with Kate, followed closely by chef Kevin.

He really looks SO young, can he be as experienced as he says? Oh wait, I just saw his bald spot, which is essentially the whole top of his head, so now I believe him. From behind.

Simone and Courtney arrive next, they're new but apparently Ashton was there last year. I can't believe I missed a whole season!! Captain Lee is happy to see Ashton and gives him information on all his crew, including Abbi, who doesn't have a picture on her resume but whom he hopes doesn't have red hair.

I BEG YOUR PARDON. That's gingerscrimination!!

Abbi with a glorious head full of red hair walks up the dock with her suitcase while Brian stares off in the distance meaningfully. Tanner and Brian are rocking slightly different Generic White Boy looks, I'll have to work to remember who everyone is.

It's 25 hours to charter, which means meet and greet and get cleaning! Courtney is from Vancouver, Canada (lovely place, but a lot of cranky people - oh stop, you know you are), Simone from South Africa.

Kate's crossing her fingers that Kevin will break her streak of crazy yacht chefs (Hai Ben Robinson, you're the best!!), but we know from previews that will not be happening this season. He gives us a little peek in to his past life on yachts.

Abbi. Abbi is giving me palpitations. She had a FULL SCHOLARSHIP TO LAW SCHOOL but gave it up to move to Greece. She's never been a deckhand, so this should be interesting. She has the most intense blue eyes under all that red hair, super stunning.

Everyone introduces themselves around to Kate, who asks Courtney what her favourite thing is about being a yachtie. Turns out Courtney likes hanging out with the guests, just as a peer, not in "servitude." Only child Courtney promises to be very, very typical already. She went to business school and learned nothing.

Simone's got two years experience, she likes cleaning but has less practice with guests so they might balance out well, once Courtney realises she has to pour wine and not just drink it.

Simone is dubbed second stew and Courtney third, they head down to meet chef Kevin. Outside, the mixed deck crew bonds; two South Africans and two Americans, so we're even! Watching Ashton freeze when Abbi says "sweet tits" was EVERYthing. Brian is designated as lead hand and they're off to check out their bunks.

Kate can't believe how hot the crew is this year, she designates Ashton as the least hot and that's grading on a curve, y'all.

Kate and Ashton show their gangs around the boat, they're establishing their authority and, in Kate's case, making her staff make beds for kicks.

Tanner gives us his backstory, okay, he is kinda cute. In pictures. 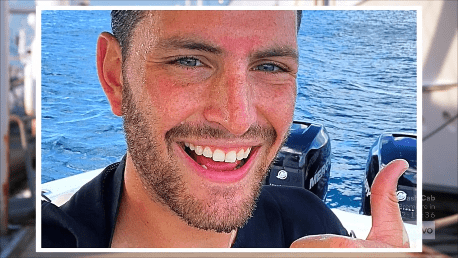 Captain Lee calls everyone up for our first meeting of the season, starting by introducing the less-hot, actually-working crew members. Hai Tei and Darrien! 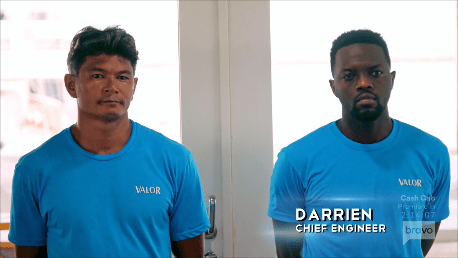 Now on to the rules:

Provisions are heyah! Everyone works hard in the 94 degree heat, pounding water and getting to know each other. Brian and Abbi are first, his dad is dead and he has a 5 year old daughter. Awww! He's pegged his performance to being a role model for his kiddo and that's just...not a good idea. You're at sea with a bunch of sexy people predisposed to binge-drinking and unwise romantic choices. You can still be an awesome parent and all those other things! I just wouldn't conflate the two.

Captain Lee calls Kate, Ashton and Kevin up for our first pre-charter meeting of the season, yay!! Primary Charter Guests Michael Castellano and Samantha Ledwell from Boca Raton will be joined by Elliot and Christina Machado BUT I think there's an engagement brewing. Michael and Samantha have been dating for 6 years and he's asked for a private dinner with a violinist. If you're going to go with a typical proposal, this is your deal right here.

Simone coaches Courtney in ironing, she worked hard to get into this white-dominated industry and she's determined to learn and grow as much as she can.

I take back everything I said about chef Kevin, I love him.

Kate is less impressed. Kevin asks her for a label maker so he can label small containers for spices, but she thinks he has too much to do for that type of shenanigans. Erm Kate, y u mad? Let the man organize!! Why get in his way?

The next morning, Kate checks her team for bartending skills, looks like Courtney will be running point on cocktails. It's a breezy 84 degrees so the sweaty deckhands set to cleaning the outside of the boat as the stews stock cabins.

It's time to change into whites for guest arrival, but it's hooootttttt. Hai guests!

It's time for BOAT TOUR!!! The Master looks gorgeous! 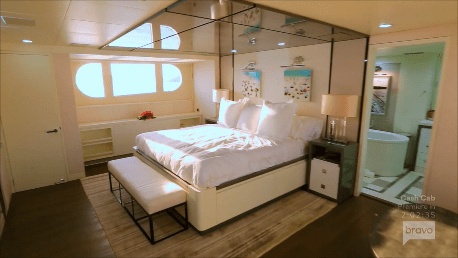 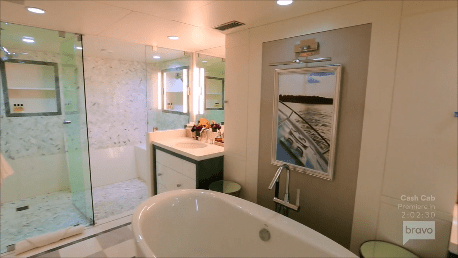 The deckcrew hustles the luggage aship as I stare at the giant hot tub on deck. It's YUGE. But I like the one on Sirocco better, it has little adorable tables set in for drinkies.

Ashton directs his crew, I can't help but wonder why Abbi wears quite that much mascara. Top and bottom lashes, no less. She's about four seconds from raccooning, I've got my eyes onnit.

Oh. I remembered that Captain Lee likes his old-timey-isms, but I forgot how much of it is penis related.

The guests enjoy a light snack as the deckhands bust their balls undocking; now, something I've noticed. Valor isn't very fancy looking from the outside, is it?

Kate is loving her new staff!

Personally, I'm just glad that Jen from season 5 isn't around. She was exhausting.

There is a slight communication issue between Kate and Kevin, leaving very hungry guests wondering when lunch will be served and Kevin working on other stuff. Simone doesn't have a lot of initiative, so she leaves the guests thinking it's 30 minutes out while Kevin is ready.

The anchor is dropped, the guests are seated and lunch is served! Erm, it will be as soon as plates are on the table! Courtney and Simone literally walk out with salads to walk right back out because the guests have no plates to put the salad on.

This is a very disorganized service. Thankfully the food is good, but they were so hungry you could have fed them Mila's nachos and they would have loved it.

They finish up and head down to sample the water toys, including a clear canoe! CLEAR CANOE! Game changer!

Chef Kevin works on a Thai meal for supper while Tanner flirts with Kate. The deck crew is starving and working hard while the interior gang eats and visits. Nobody knows when to go for food! Finally Ashton realises he's left his crew hanging and starts sending them for breaks, whoops! That was great until he basically told them it was their own faults.

The guests dress for dinner and head down to the still-hot deck for some Tom Yum. Pork Belly with Yellow Curry is the main, it looks amazing but Kevin's already fighting with Kate.

Brian, Ashton and Tanner sit around and talk women in the crew mess; Tanner's got his eye on Kate. He likes older women and Kate is totally hawt af. She's super smart and hilarious, let's see what she thinks of Tanner talking about her when Courtney can hear!

Also: Tanner hooked up with a 58 year old. He's basically a baby, so trying to picture what that grown woman was thinking is...confusing. Not to get all Mindy McCready, but guys do it, all the time!

Ha!! I totally called it, Michael is going to propose to his girlfriend Samantha. He explains his plan to Kate and Kevin, who's having problems with his belly while scrubbing his kitchen spotless.

I DIG this man's organization and cleaning!

Kate does not dig Tanner wanting to bang her. She's not in her twenties.

WHY do we need to hear Tanner poop, Bravo????

You know I'm watching the table settings after this last season of Below Deck Med, right??

The team prepares to set up for a beach picnic. Courtney is not looking forward to being on the sand in 800 degree heat. Kevin works hard on supper while trying not to poop himself.

Courtney and Tanner run drinks for the guests. I thought Courtney was complaining to herself in interview, but no! That's all out loud to Tanner as they walk by old men in banana-hangers. Jaysus. Well. Thailand.

We do NOT need to hear Kevin poop some more, Bravo!! We end with him chastising himself on the can (MAN DOWN) and roll into the season preview we saw on Below Deck Med!