We've got trouble a-brewing aboard the Valor on Below Deck; is one of our guests in a medical emergency or just on the most expensive bender ever? Let's find out after the break! Rolling Below Deck S7:E04 Weekend at Brandy's II.

Have we not had this set of guests on FOREVER? We have, right? I feel as though I've been watching Primary Charter Guests Helen Hoey and Richard Fiore pound shots for at least a year. Primary Helen is right now telling everyone to not let guest Brandy's apparent collapse/seizure ruin their experience, this is *her vacation* for fun. HER TIME.

Chief Stewardess Kate Chastain calmly radios Captain Lee Rosbach for instructions on how to deal with extremely intoxicated and now panting guest Brandy, he directs her to have Brandy brought back to the boat. Deckhand Tanner Sterback and lead deckhand Brian de Saint Pern load Brandy up in a clear canoe and it's business as usual at the beach picnic.

One of the guests is murmuring something about gluttony being the problem and that makes me think of the movie S3ven that I chose to watch on Halloween night. I cannot recommend doing that.

Captain Lee and stewardess Courtney Skippon sit with Brandy while they wait for the medic. Stewardess Simone Mashile is down in the laundry room, she's trying to break out of cleaning and into serving (she has a MATH degree) but a recent run-in with Chef Kevin Dobson has her happily ensconced between the washers and dryers. She has to come up and help with the guests as Courtney can't leave Brandy alone.

The rest of the guests are surprised at the measures Captain Lee is taking, does he really think she's that bad? He does and he's kind of surprised they don't. Of course, they know their friend better than he does, so.

Did I mention that Captain Lee will bring up peni whenever possible in his old-timey sayings? Totally will.

Kate and the boys pack up the picnic while back aship deckhand Abbi Murphy gets sent to tie her hair up again. She has a LOT of hair. Tanner makes his move on Kate, how about they grab a bottle of wine tomorrow after the guests leave? She thinks that's hella rude, she needs her own whole bottle, Tanner! He's totally got a crush and it's so cute that he made his move. They work in proximity and while she outranks him, she's not his boss and he's not hers. I think they're safe!

Chef Kevin reassures a bikini'd guest that she's gonna love dinner tonight, he's taking off the gloves. He doesn't have a lot of...personality yet, hey? He mostly stared at his food instead of interacting with the guest.

Abbi is told to put her hair up AGAIN.

The medic finally arrives, I think he's a doctor and Brandy is in no mood to play along. She's sobered up enough to be able to breathe again, Kate and I are happy about that. She's been drinking for two weeks straight, wow. Expensive bender it was!

Tanner jokes with Simone in the crew mess while Brian is left on deck waiting for someone to help him with the slide. Now, Bosun Ashton Pienaar didn't say he needed to rush right out there, maybe that would have helped. Brian decides to take care of business solo, but that slide is so HEAVY! He uses a winch thingy and breaks.it. It's called a davit and Brian is in trouuuuubbbble.

To his credit, he immediately goes and tells Captain Lee what he did, taking full responsibility. That's the good part, unfortunately he just broke a machine that costs $60k. So not only will it be expensive to fix, it also cant be used right now for stuff you're actually supposed to use a davit for. Boooo

Captain Lee decides this is Ashton's fault and calls him in for a chat. The thing is...Brian told Captain Lee but did not tell his direct supervisor, so Ashton looks totally clueless.

Kate checks on Brandy then everything starts to ramp up for dinner. Kevin found some fish in the back of the freezer and a bunch of fresh Thai shrimp. Only 7 for supper with the captain joining.

Abbi complains about how being on a superyacht is not at all like boating. Erm. Duh. She has to change clothes all the time and apply copious amounts of bronzer, not boating! Waaaaaah

The interior crew makes fun of Courtney's radio voice, she sounds so sweet! I'm too busy staring at the galley: it's HOOGE! Was it always this big?

Captain Lee calls Kevin up to the bridge for a chat about the fight the morning, Kevin explains it away and then leaves to make supper. Without.being.dismissed. Captain Lee can't believe he did that.

If you do not respect the rank, he will own your ass!

Once again: Kevin was in the middle of supper prep and he felt he'd already handled the fight with Simone, given that they hugged it out. He doesn't understand why Kate would go complain to the captain and hey: he's busy, y'all!

Ashton brings his crew together for a meeting, explaining the chain of command and trying to re-focus his team as there have been lots of little mistakes lately.

Kate seats the guests for dinner, wow. That's a lot of colour and gold lamé. Kevin's first course of deep fried prawns with their heads still on goes over well.

And then Kevin forgets to make an entree for Captain Lee. Kevin ATE it.

Captain Lee sits there and eats garnish while the guests wax ecstatic over the food he is not eating. Kate can't believe Kevin didn't even try to make something for the captain and neither can Captain Lee.

Kate and Courtney gossip about Brian, which I can't get mad about because the guys were all talking about Tanner and Kate earlier. Courtney has Brian pegged as a guy who takes mirror selfies at the gym and posts on Instagram, they totally find ALL the gym shots on his Insta. She's not into super ripped guys, though, they are too busy working out AND she likes something squishy to cuddle with. Amen, sister.

Courtney is on lates, cleaning the laundry room and galley when Brandy appears out of NOWHERE. I seriously jumped. The doctor told Brandy to have some juice, now she's asking for champagne. DO NOT serve this woman! Courtney saw her earlier and she STILL serves her. Jaysus.

Courtney wakes up Kate, which is exactly what I would have done. Brandy tells Kate she looks like she needs some sleep hahahaha what? Brandy looks like she took an entire superyacht in the face and she's telling Kate to catch up on her beauty sleep?

She's also screaming on the phone to someone, sigh. I think I know Brandy. I think I might have been Brandy. Brandy finally goes to bed!

It's the next morning, guess who wants Simone to bring her champagne? NO, GUESS?! The deck crew pulls anchor as Kevin feeds everyone. You know, NOW.

Kevin knows he's got to address what happened at dinner last night with Captain Lee, so he comes hat in hand to the bridge to apologize. I don't know if I'd admit you ate the Captain's food, Kevin. Poor form. Captain Lee addresses all of his disparaging remarks to the window so Kevin gives up and leaves, feeling disrespected. Sigh.

Primary Helen stops by the galley with a goodbye gift for Kevin, it's a pair of panties. With pearls? Kevin and I:

He's supposed to wear panties and take a picture to show her? Can the pearls be removed? Are the pearls worth anything?

The deck crew expertly docks the Valor and it's time to say goodbye to everyone! I LOVE that Primary Helen is so open about the tip, woooo! Show us the MONAY!!

First it's time to turn over the boat, so everyone changes and gets at it. And then we're in the crew mess for the tip meeting, that was fast! Imma guess $17,000 based on absolutely nothing.

Kevin waits in vain for the praise the Captain is liberally heaping on everyone else.

Kevin finishes up in the galley right away (I knew he cleaned as he went) and heads outside to help the deck crew finish up. Mostly, it's to gossip with Ashton about what girls they like, Ashton thinks Courtney is too much work.

Just kidding, I like Courtney but I'm in the Tanner camp as far as spending a lot of time with her.

Tanner gets all fancy and waits for Kate, who is getting VERY hawt in her room. She washed her hair instead of having wine with Tanner, awww. She's hilarious.

So Ashton said he wasn't into Courtney but once they head out to party, he's got his hand between her legs, he's kissing her hand, he's all over her. How does he treat the women he's into??

The gang is partying in an absolutely beautiful part of Thailand, would you think less of me if I said I never, ever want to go there?

Kevin steadily drinks morosely while everyone else parties and dances. Tanner's no quitter, he drunkenly pushes his case with Kate, could they maybe go on a date? The thing is, she needs him to be more sober to hook up with him and herself to be more drunk. "I'll bang him drunk probably. Maybe. On accident."

Ashton and Brian are all over Courtney, she's completely stonefaced as Ashton makes his pitch. "I hope he doesn't think he's being romantic." Hahahahaha. Then Brian comes back from the bathroom and it's time for he and Courtney to flirt. He asks her if she feels the need to talk all the time and she says "I'm really pretty so" hahahaha. He does not get the joke.

I will say for someone who said she's not into Brian...Courtney looks pretty into Brian.

Ashton is not happy to see Courtney and Brian flirting with everyone giving their stamp of approval.

Abbi is loaaaaded. Time to go! Ashton fully grabs Abbi's bum in the taxi before leaning across to lay in her lap. Kate is much less happy to have Kevin laying on her. 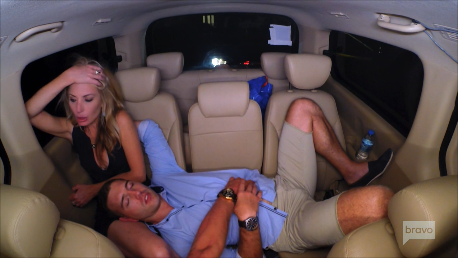 Simone carefully escorts an extremely drunk Abbi back to the boat where she eats until 4 am. She is TINY. Simone tries to wake her up in the morning but Abbi is oooooot.

Captain Lee being mad at him is messing with Kevin's head, he goes for a run and I love that. I also run to relieve stress. I also like a strong organizational game, basically Kevin and I are twinsies.

Ashton can't believe Abbi isn't getting up to be on deck because of her hangover, he had one rule, guys! One.rule! And we're out. Cheers!