Hi everyone, we're back on Below Deck with Real Housewife Alexis Bellino aship superyacht Valor with our yachties, what's gonna happen tonight? I'm guessing there will be snuggling, cuddling and some barfy canoodling, if last episode is anything to go by, let's find out after the break on Below Deck S7:E16 The Scorpion Queen!

Last we saw our intrepid crew, everyone was fighting except chef Kevin Dobson, who hurt his back. He's regrouping in the crew mess with Captain Lee Rosbach, who's there to assess the damage and come up with a mitigation strategy. Did you know Captain Lee's owned a bunch of restaurants over the last few years? Me either! Here I thought he was just a skinny Kenny Rogers with a way with words!

Chief steward Kate Chastain heads for a break, leaving second steward Courtney Skippon to manage the guests. They're hanging out on the Bunny Pad anyway, how hilarious is this guy in the mini-trunks? 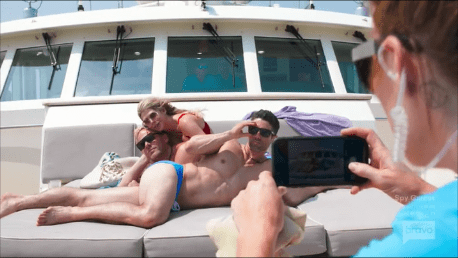 First Mate Teh is on camera again, wooooop! Where is your Love Boat style intro, ye silver fox?? He helps Kevin get upright so he can limp upstairs to the galley again. He groans the whole time but he's getting it done!

Huh. Last time we saw Primary Charter Guest Alexis Bellino all over her boyfriend Drew Bohn with him seeming mostly detached. Now he's pawing her bum over and over in the hot tub, so maybe he IS into her! Yay!

*I know last week was all Bravo editing, but there were a couple of shots that were pure eeeehh.

Bosun Ashton Pienaar sends third deckhand Rhylee Gerber and second deckhand Tanner Sterback on break, Rhylee's so disenfranchised that she doesn't even care any more. Lead deckhand Brian de Saint Pern wanders out to gossip with Ashton about his relationship with Courtney, he messed up pretty big last time. He sent her a text that said they were just having fun, which no person ever wants to see if they actually like you. If they don't like you, they probably just won't answer; fun for them!

Kevin cooking venison for dinner, he thinks these Americans will appreciate the lean cut of meat. I strongly dislike venison, but I'm not American so maybe it'll be fine.

You see what I mean about Primary Alexis coming on a weeeee bit too strong?

She means for her Divorce Party! That's tonight and it's Independence Day, y'all! Except she is doing everything she can to lock down husband number three, that sounds like the opposite of independence. NOT that you can't be married and independent, I've heard that exists. Like unicorns and rainbows with pots of gold at the end!

Alexis has had too many showers already today, so she wants to eat inside tonight. Kate plays along but it's way easier when the guests are on deck and not directly outside the galley.

Since the theme is independence, Kate decorates the table for the Fourth of July because why not? Divorce absolutely means twirly red, white and blue metallic streamers and the American flag!

The guests dress for dinner and Tanner asks when he gets to come play in Kate's room, maybe he'll stay sober enough to make it this time! Did I mention he already hooked up with second steward Simone Mashile already? She liked him a LOT. She's playing it cool in front of everyone else but when she hears that Kate and Tanner have been flirting, it's on.

The guests are so excited to see Captain Lee at their dinner table, awww, that melted my cold dead heart!

Rhylee and Tanner are on lates together, in between him flirting with Kate he gets into a fight over when to spray the deck. Rhylee wants to spray the deck with K2 (isn't that the synthetic drug A-A-ron Hernand*z was smoking right before he died??) while the guests are dining but Tanner wants to wait until after. Tanner asks Daddy Ashton what he thinks and Rhylee is overruled.

Kate believes in Girl Code as long as it doesn't involve someone as cute as Tanner and someone annoying her like Simone.

Which is like saying you believe in keeping an open mind unless you're talking with people you don't agree with.

Kate is so busy flirting with Tanner that she hasn't got any time for last minute menu changes or plating switchups, Kevin! They went over required dishes earlier, so no gravy boats for pouring your lobster bisque!

Rhylee and Simone work on cabins, ahhhhh noooooo Rhylee tells Simone about Kate and Tanner kissing. Rhylee couldn't keep a secret if it came to her in tiny shackles and a ball gag.

Kevin sends out great food all night, Captain Lee is impressed at the "unique blend of flavours."

Courtney takes Brian aside, she doesn't want to fight with any more so they kiss and make up.

The guests go to bed so early! Only 10 pm, what? That's so reasonable and exactly what I would do.

Simone breaks a glass and cleans it up next to Kate, smiling the whole time while interviewing some truly vile shite. I get that she just found out about Kate and Tanner kissing/flirting but it's not like they do the interviews in situ. Jaysus.

Everyone cleans up (Kevin's galley is so tidy!!) and heads to bed, just one day of charter left! They awake in Ao Phai Plong, Krabi and I'm sure those words mean something to someone. It's very pretty! 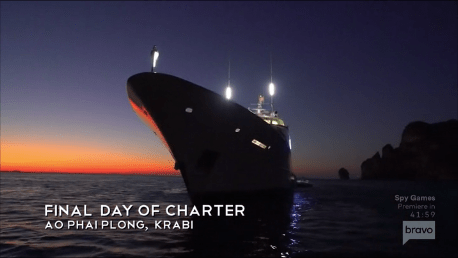 Captain Lee and the deck crew lift anchor without Tanner's help because he slept in.

*Sigh. They just had a preview of later and it looks like Kate's been drinking and the deck crew is ganging up on her again.

Wooooo it's the last breakfast of charter and the guests are taking ALL the eggs with them! One orders an 8-egg-omelet. 8. I like eggs more than shoes and I would have a hard time finding a place to put 8 eggs.

After Ashton and Captain Lee scare Brian and Tanner with the horn it's time to change into their dress whites for guest departure, woooo! Show us the TIPPPPPPP!!

Kate freaks out as they dock, her first yachting boat is right there! She hasn't seen this boat in ten years, it's where it all started.

Back to guest departure! Drew hands over the tip envelope, he has suuuuch a deep voice. Barry White gives Captain Lee a fairly thick envelope, I shall revise my guess downwards to $14,000 based on nothing.

It's time to turn over the boat, but after lunch. Rhylee is openly excluded in the crew mess. How can anybody want to sleep with Tanner? He's such an immature jerk. She eats in her bunk by herself.

Kate takes pictures of her first boat and contemplates her future; she doesn't think she can do this forever. She's ready for a new adventure!

*I look hard at Ashton*

Boat washdown goes as well as expected, Rhylee's hurt feelings over being openly shutout at lunch leads her to be more vocal about the work ethic of Brian and Tanner, who take smoke breaks while she works. Ashton does not think this criticism is constructive or warranted and suggests she take a long break before things go pear shaped. She'd rather clean alone by herself than take a break, thanks, so he leaves. Jaysus.

It's time for the pre-charter Preference Sheet Meeting already! Yay!! Oh wow, the Primary is Jemele Hill? Even I know who that is, and I am clueless about American sports. I know of her because she called the current president a white supremacist on Twitter, not about sports, though, so maybe my record of sporting ignorance remains intact.

Primary Jemele will be enjoying an all-lady charter with all the good food, she's getting married! This is a pre-bachelorette party with one 90s theme evening. What does that mean? There are no dudes, so there can't be any moshpits and depressionmusic, what are the 90s good for? I mean, I was there and all I remember is 100% Pure Love by Crystal Waters. Oh wait, Mr. Vain?? I know what I want, and I want it NOW! Woooooo!

Primary Jemele wants nasty drinks, like blowj*b shots and let's see how many I can come up with off the top of my head!

Captain Lee wants to make sure there are "little d*ck lollipops", Kate is quick to quip "anything for you, Captain."

Kevin has to make a, erm, manly looking cake but he's far too nerdy to sell this.

Rhylee checks in on Simone, who's still struggling a bit about the Tanner and Kate business. It's not just that, though, she has a long history of being let down by men, starting with her dad. She and I both get choked up as she talks about her dad abandoning her as a child, it's something that's happened again and again in her life and it makes it very difficult to trust and let people in.

I may know someone who struggles with those same issues because of the same background, the only thing I can suggest is that sometimes that someone also gets attached to people too quickly and is inevitably let down because nobody could possibly fill that hole of Everybody That Did It Wrong.

I don't think Tanner was disrespectful, I just think he didn't take care with her. And Simone requires care and that is very much okay. It's okay to not be easy in your feelings but it's not really fair to give new people the bill for your past.

The crew dresses for their abbreviated night out, it's so hot in Thailand! Hard ginger pass.

Wooooo we're at a night market and I finally getta see the kitty in the babyhanger from the season promo! It has glasses!! 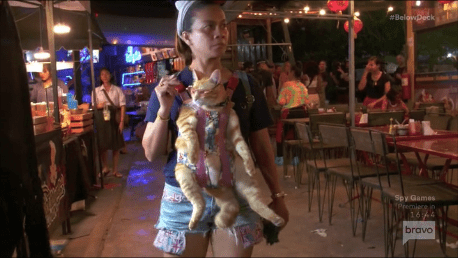 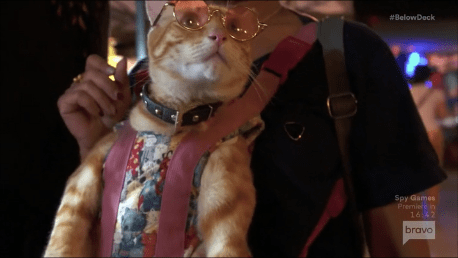 WHY DOES IT HAVE GLASSES??

Kate, Simone and Rhylee eat scorpions.on.a.stick; Kate wonders if this is her spirit animal. Then Rhylee and Kevin get into a fight again and I think about the life choices that have brought me to watching these two usually likeable people fight AGAIN.

Rhylee doesn't talk to Kevin next, she lays right into Ashton out of nowhere.

This drama bleeds into Courtney and Brian fighting, he doesn't like her sticking up for Rhylee and you know, having her own opinions.

The trip to the market ends with Rhylee AND Courtney crying in one van while Brian hands out friendship bracelets to everyone in the other van. They're all very interested in whether Tanner is gonna bang Kate, which is hilarious that they think it's up to him.

The females aship are having a really sucky night, but the guys are having a great time! They sit up late, drinking and shouting loudly about whether Tanner will seal the deal or not. Kate thinks they're shittalking her and she's had enough. She refuses to let Kevin into his galley from the Interior.

Captain Lee is woken up in the middle of all Kate's door slamming and Kevin's shouting, he's angry. By that I mean he's "madder than a pissed-on chicken."

Watching Ashton pretend he had nothing to do with it and point at Kate makes me contemplate my life choices again. He and his arsehole bully crew all. The Captain is straight up MAD.

That is one mad dad, NOBODY gets to take the car tomorrow! Everyone's on KP duty!

And we're oot. Until next time, cheers!