This is it, the very last episode and charter for Below Deck season 7! Below Deck Sailing Yacht already aired, give them some breathing room, Bravo!! Honestly. Let's see where we end up after a tumultuous season of shenanigans and so, so much too much booze. Rolling Below Deck S7:E18 Big Girls, Do Cry after the break!

We open where we closed, with Chef Kevin Dobson awkwardly holding a large sparkling penis cake in the middle of a serious conversation about life goals and helping children.

It's not really Kevin's fault, he's been working on this giant penis cake for hours for the Primary Charter Guest Jemele Hill, who's there on her bachelorette weekend. Jemele was bacheloretting so hard all day that she's already in bed, something chief steward Kate Chastain neglected to tell Kevin so he looks like a giant penis shaped doofus. The dessert goes over like a lead balloon, absolutely nobody cheered or laughed or did anything other than look horrified. Captain Lee Rosbach squeaks "I'm not taking a bite!"

Kevin takes it into the back and starts tearing it apart the cake for service, wow, it had..veins and everything. He's so deflated! He wasted a whole day on that cake and it doesn't help that Kate's wandering around saying totally un-suspicious things like: how was I to know? It's not my fault. Kevin picks up on her vibe.

Second steward Simone Mashile is so over smug Kate with her Cheshire cat grin, delighting in Kevin's humiliation and discomfort. He worked on that all day. I can't imagine that would help their tip at all.

The deck crew isn't having a better night either, bosun Ashton Pienaar calls a group meeting up on deck to give them their final assignments of the charter. He takes the opportunity in interview to shittalk third deckhand Rhylee Gerber some more, honestly, I can't believe he let her get under his skin like that. I've talked about it so much, I don't have anything to add except: thank the gods there's just one more day.

Most of the crew is feeling the same way, but Simone is having the best charter of her life. She LOVES Primary Jemele and her friends and they adore her.

You know, she has a math degree. She could probably help one of you do something fancy?

Third deckhand Tanner Sterback gets a call from his mom, they're very close. She likes to say super inappropriate things in a tiny little baby voice. Don't get anyone pregnant, Tanny!!

Other second steward Courtney Skippon is having a super traumatic end to get boatmance with lead deckhand Brian de Saint Pern, they went from super chill and lovely to tears and yelling overnight.

Kevin has regrouped from the penis cake fiasco, he wants to apologize to the guests in the morning. He asks Kate gently about her not informing him of the vibe and guest lineup, she gears up to fight.

I guess not! Simone is LOVING Kevin yelling at Kate.

Everyone goes to bed and Primary Jemele finds out what she slept through the night before.

Ashton is still trying to deal with Rhylee, you know what this reminds me of? Tonight on the running/walking track at the gym, there was a woman running and two men walking. I'd not seen these two men or this woman on the track before, but I'm guessing the dudes were newbies because they didn't follow the most basic rule of track etiquette: you walk single file when someone faster than you is passing.

Not only did the two guys not move over, she almost fell over trying to get past them which was very entertaining for them, apparently. There were all kinds of gestures behind her back and some laughing and I can't remember the last time I wanted to punch a stranger in the face that hard.

Ashton and his brüs treat Rhylee like this; an obstacle to be gotten around and mocked, when she's doing the work that she's supposed to. What exactly is Rhylee supposed to respect about Ashton? His shittalking her to the rest of the crew, some of which are at her level? His dismissal of anything she says? His willingness to throw her to the wolves? He's a new manager, so maybe these are skills he could learn, but he needs to stop taking the approval of his underlings as signs that he's doing the right thing. He is not. He has not.

Anyway, he calls her up on deck to discuss the last crew night out, she also wants to have a night out with no drama so this should be super awesome.

Kevin sends out a fantastic breakfast, he's got it all! Captain Lee directs the deck crew to pull anchor, but this doesn't look right to me. Am I seeing things? They all seem fine with it.

Kevin and Kate spar a bit more then she retreats to her bunk to tell us how much she hates him and he owes her an apology. He heads up on deck to serve the custard buns she refused to send out and, hey, has anyone ever told him he looks like Tom Cruise? Yes! And about the cake...oh thank goodness, Primary Jemele says thank you for the cake and she's sorry she missed out on some good D.

Primary Jemele and her awesome friends are not leaving without popping some bottles, damnit! Kate pulls out two bottles of champagne and we're out on deck! Ashton blows the ship's horn while they're popping and it's just so FUN! Best charter this season for sure.

They head to dock and I do not understand Captain Lee! Is he using an expression from the oughts???

The guests are leaving, it's time for crew whites and THE TIIIIIIPPPPP!!! Wooooo! Jemele Hill hands over a thick envelope and makes Captain Lee blush with her comment about "grown man sexy."

Over the whole season, they made $154,700 in tips alone, $14k each. That's insane. Captain Lee is sending them to a private beach for a Full Moon party, that sounds..fun?

Nobody works too hard on cleaning the Valor superyacht, it's probably going into dock until next season. The boys do backflips off the deck.

While the girls drink pink champagne in the Stew Pantry. It's so Boys vs. Girls this year!

Let me shut up, the Full Moon party looks AWESOME! 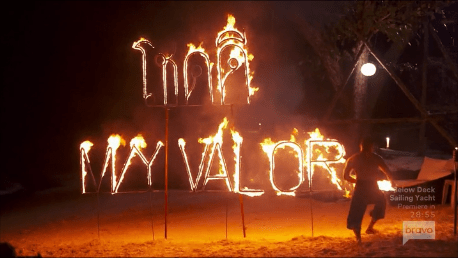 They've been there for literally 7 minutes, Kevin's jumped through that flaming hoop already, Tanner's drunk and Kate's settling in for shots.

Captain Lee is doing exactly what I would be doing: ironing his clothing in peace on Valor.

Five minutes later, Brian's slurring and talking to Courtney about leaving things on a good note. She doesn't care, they are never going to see each other again, so they kiss and hang out. Might as well, there are zero stakes.

Can I just say? Rhylee looks fucking AMAZING this episode! Her skin is glowing, her eyes are an unreal shape: just AMAZING.

Ashton falls asleep in a tent as the drama starts to simmer.

Kevin and Kate start fighting again, neither one can speak, really, but somehow this is the time to talk about who checkout when and what's wrong with being a BAKER, Kate??

I BEG YOUR PARDON??

Tanner makes the mistake of sticking up for Kevin (whose food was amazing and diverse and versatile and fresh) in front of Kate, I'm guessing they will NOT be hooking up later as he's been trying for weeks.

Many many shots shots shots follow, Tanner making his move but Kate easily dodging. She does not like to be questioned. Ever. I like Kate, I think she's organized and funny AF and incredibly good at her job but she's been all over the place this season and refuses to ever admit she's wrong. It's frustrating to watch.

Tanner finally gets Kate to sit for a minute with him, she says quite clearly that nothing's going to happen after he stuck up for Kevin. She declares herself a lesbian. I mean, she was.

Simone hooked up with Tanner quite some time ago, she's so happy to be on out the outside of his drunken romantic shenanigans, watching with Rhylee.

Everyone packs up and heads to the boat, this has been the best experience of Brian's life. Kate's still in pain from sand being kicked in her eye, he tells her not to worry about it. I guess it's just positive vibes only, bru!

Kevin can barely walk when he gets back, and he's covered in sand so he strips in the hallway and we see almost everything. For the love of. I never, ever, EVER in my life needed to see Kevin's furry white bottom. EVER.

Kate sleeps in the master, Courtney and Brian sleep in one of the other guest rooms.

Kevin is up and perky the next day, somehow in his garbled interview we learn that he's got a small penis and that he thinks he only threw sand in Kate's face (IF he did, he doesn't remember), it was because she said something bad to him.

Tanner's decided to stay drunk so he doesn't get a hangover, atta boy!

It's time for everyone to say goodbye, blah blah blah. Simone's going to the Mediterranean to try to get on a boat, Tanner's going home first. Courtney is taking a vacay, Kevin is heading home for a holiday with his daughter. He didn't even say goodbye to Kate, but she follows him out to shout it out to him. He doesn't answer. He literally only said goodbye to the dudes.

One thing: Simone didn't know how to say goodby to Kate either because she felt their relationship was disingenuous. For the record, she was the one sharing exactly zero of how much she hates Kate. On the other hand, Simone figured she was there to do her job and be professional, it's not as though discussing anything with Kate ever got anyone anywhere.

Brian's gone next, he's going to take some more training to be a captain and hang out with his daughter. Rhylee's on her way back to her fishing boat in Alaska. Now it's time for the Ashton/Kate goodbye, which is marked in its brevity. Ashton will be going to Florida then the Bahamas.

Kate is last to leave before Captain Lee, they'll see each other in Florida after she takes a one week vacation by herself. After that she's moving to New York! Really? What for?

We're out for the season! Thanks so much for reading along, hope to see you on Below Deck Sailing yacht recaps! Cheers