We're still on charter with Whitney Thompson Forrester and her gaggle of cackling friends, right in the middle of a toga party. The guests are having fun, much more so than First Mate Paget Berry and deckhand Ciara Duggan fighting on deck about whether or not she's working hard enough.

Whether she's working hard enough or not, her attitude SUCKS, most likely due to the fact that they've been dating for four years. She's openly insubordinate, which can only go on for so long.

Chief steward Jenna MacGillivray is serving drinks on deck, she's the one Primary Charter Guest Whitney would most like to bang on the boat!

*Imagine working in a place where people openly discussed banging you while you were serving them food and/or drinks and you had to laugh like it was hilarious and not harassment. Now go work in a bar, samesies! Jenna takes it as a compliment, which is how it was meant, but still.

Jenna calls second steward Madison Stalker up from cleaning crew cabins to make some coffee; Madison's starting to realise who she's working with. She's called herself the Energizer bunny before, perfect for yachting, but she's used to being part of a team. There is no We in Jenna's team, there is Do As I Say and Then I'm Going To Be Snotty Anyway.

Parker's super loud in the middle of the night is no beuno for Adam! (Keep it up)

It's the next morning and we have some wind so it's time to SAIL! Woooo! It's so incredible looking, majestic. Everything starts falling over inside at the 8 degree heel but the guest LOVE the sailing.

Adam does not love the idea of serving food under full sail, so he asks Captain Glenn Shephard if they could cruise while they eat, but that's a no-go. These guests were super obnoxious about wanting to sail yesterday when they couldn't (looking at you, Katie), he's gonna sail!

Captain Glenn gracefully declines to let his chef decide when he's going to sail and sends him downstairs forthwith. They're sailing into the wind, so they have to tack upwind (zig zag) to get to the dock.

More things fall down in the galley. You'd think the chef would be more prepared. 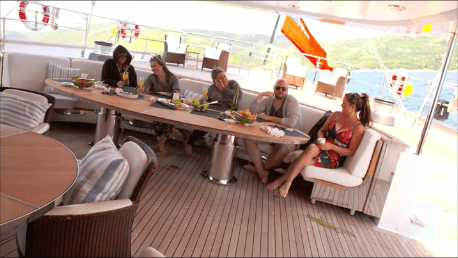 One breaks a glass so Jenna calls Parker on deck to clean it up. He makes the mistake of suggesting something helpful, so she complains to Paget, his boss, to tell him to shut up and do his job.

The wind makes docking more complicated that usual; Paget has to shout and wave lines about while Captain Glenn calmly asks questions. Then less calmly as he doesn't get feedback and there's this horrible shrieking noise as the lines are under pressure. Parker threw the wrong line, he just wants to make people happy, you guys!

Time for de-docking, Primary Whitney Thompson Forrester hands over a tip envelope and heads out.

Paget and Ciara make up, he has a lot of respect for her! She's a hard worker, like his mum!

...I'm not touching that. I will say that I do not know if Ciara has the same respect for Paget.

Adam was really hard on third steward Georgia Grobler last time, with an assist by Jenna who thinks Georgia should just shut up and do her job better. Pay her dues! Which is code for "I was too stupid to stick up for myself so it pisses me off when other people do."

Jenna complains about the laundry to Georgia, who was never told how everyone wanted the laundry done but that's okay apparently, because Jenna says everyone was too busy to teach her. Okay, it's helpful if people have some experience with organizing, but since you're convinced you're the best stew ever and everyone else is stupid, maybe throw her a bone.

Parker is bummed that he had a bad charter, he kind of messed up and kind of spoke his mind and they think he should do more stuff they want him to do. Can't they just like him for who he is?

Parker! This is exactly what they're talking about with this Participation Trophy Generation! Stop! But don't stop asking questions, I like that it irritates Jenna.

Crew night out, woooo! They get dressed up and head to Corfu town for dinner, chief engineer Byron Hissel looks younger here. Parker can't shake his sad mood, but everyone else is having a good time.

Several Moscow Mules later, everyone heads back to the boat where Jenna is much more chill about Adam than last time, whew. He likes her, thinks he'll mess with her and hey! He can blame any of his kitchen mistakes on her because that's how he do.

Madison and Parker crash out together in the crew mess, awww. Then Madison heads in to cuddle with Georgia and commiserate over how much their boss sucks.

Sylvia Hampel will be our Primary Charter Guest, a single mother woooo! Her daughter Jessica Shor and son-in-law Adam Shor are coming along with their newborn baby girl and Sylvia's sons Travis and Parker Tipton.

A one month old on a sail boat. Wow. Nothing about that is going to be easy.

Parker opens up to Georgia about his past serious relationship with a woman named Kaiti, it took him a long time to recover from their breakup.

Jenna yells at Georgia for not knowing where Adam's chef's jacket is, when Georgia cries after, she laughs.

You know, I knew Jenna was a garbage person when she ignored then mocked Madison last episode, but this here's a new level of asshole. She makes fun of Georgia crying to Madison, who runs down to give Georgia support. Honestly.

Jenna hears Madison and Georgia talking and comes over to smile at them, Georgia closes the door immediately.

She just enjoys it so much when they do.

Like, I get it. Jenna just wants people to be able to do their jobs without help and be mature and not have emotions at work. I understand! But she's still their manager and she has the responsibility to manage her team correctly and help them be successful at their jobs. Georgia is struggling. Instead of rolling your eyes and laughing about it, help her. Maybe during some of that time when you're hanging out in the galley drooling all over the chef.

Then Jenna tries to hug Georgia, who asks her to please not touch her.

Boat tour!! My god this ship is gorgeous, look at all that wood! Is that teak? Ciara said they put in teak in the off season, but I didn't think teak was so dark and so shiny. Hit me back in the comments!

My first impression is that the guests are laid back and awesome, I'm looking forward to a chill charter. Whoops, hold on, baby momma Jessica has a couple more dietary restrictions than she had before, she'll need: no eggs, no nuts, no dairy, no coffee and no soy. Hey, he's gotten really good at vegan, you'll be fine!

The crew head out to sea as Adam prepares lunch and they check out the wind: not good for sailing yet. Paget, Ciara and Byron watch Parker chat with the guests, they think he does that too much. I think he's one of the few Americans on the ship and the guests snagged him, not the other way around.

They pick on him.

Captain Glenn docks in Avlaki and it's lunchtime! Everyone loves the food, Byron takes this time to videochat with his one-year-old daughter. She's so cute!

Jaysus Christonacrutch Paget doesn't like Parker saying he's waiting for direct orders from a superior in front of a guest. You told him he can't think or speak or talk to the guests, then you get mad because he says he needs a clear and direct order, because it's in front of a guest? What is wrong with you, Paget??

But Parker needs to lay off the self-affirmation in interview, literally nobody cares if you're being "the best Parker you can be." No.one.

Madison helps Georgia with some laundry tips while Jenna flirts in the kitchen with Adam.

The Primary's son Travis wants to see the engine room, Byron is surprised but game. That sounds much better than the lapdance he's got on offer to improve the tip.

Jenna explains a whole lot in the galley to Adam, she doesn't have any kids because she's infertile. Adam LOVES that. That was...a lot. It had something to do with her appendix bursting when she was 17 and all I'm going to say is that I was told I was infertile when I was 17 also! Have you met my three sons? They're adorable.

Paget doesn't want any of Ciara's kiddos, for the record.

THAT'S GINGERSCRIMMINATION!! I was a ginger baby HOW DARE YOU? YOU DON'T DESERVE GINGER BABIES!!!

Paget and Ciara head to the beach to set up a picnic while Adam gets supper rolling. He thinks he has kobe beef, sure. The baby fussing slows supper as Ciara and Paget fight over.digging.a.hole.

Baby Angelica cries all through Adam's meal introduction, then her momma spends supper soothing her and that's why you should never go anywhere fancy when you have small children. Denny's tastes just fine cold.

Georgia's spent 90 minutes in one guest room, she hasn't even touched the master so Madison comes to help her. Jenna is sending Madison to the beach party, though, so then it's just Georgia and she's not happy about it. Her "f*ck me" gets a head shake from Jenna and I actually agree there.

Madison didn't know she was going to the beach picnic, a heads-up would have been great.

Georgia walks by the galley in time to hear Adam encouraging Jenna to make her cry again, break her down! Jenna wants to pummel Georgia but Adam thinks she should just be fired. Garbage.people.