We're back on Below Deck Sailing Yacht with our extremely nice and extremely young charter guests, along with our jerky department heads! Are you ready to watch our crew leads bully their junior staff with zero repercussions? Yeah, me neither, but here we are. Let's roll into BDSY S1:E05 Shmexual Shmension after the break!

We left the interior department mid-fight, chief steward Jenna MacGillivray being a super bad manager and awful person to third steward Georgia Grobler, much to the delight of arsehole and chef Adam Glick. He likes that she holds her ground and thinks she isn't a bitch!

Spoiler alert: neither of those things are true. Bullying an underling is not "holding your ground" and honestly.

Jenna's trying to get a leg over with Adam, that's why she's neither helping or communicating properly with her staff.

Second steward Madison Stalker is taken off cabin turndown service to go to the beach picnic with the guests with zero notice, again: if someone wasn't hanging out in the kitchen all the time making googly eyes at an arsehole, she maybe would have been notified in advance.

Captain Glenn Shephard and first mate Paget Berry take the guests over in a tender and Madison serves up drinkies and marshmallows.

It's midnight before the guests make a move to leave the awesome beach picnic, Madison is sooooo tired but Georgia has enough energy to flirt with Paget in the laundry room. She calls it being vivacious, but she's pretty much always talking about his body, so he (and us) may misunderstand. They were talking about how Georgia keeps messing up the crew laundry, she's still getting the hang of things. Some direction from above might help.

Deckhand Ciara Duggan (and Paget's longterm girlfriend) takes everyone back to the ship, she shoos away Paget rudely because as far as I can tell: that's how she communicates with him.

Bad news for Madison back on the boat, there is still a tonne of guest laundry to be done.

Is Georgia moving at as slow a pace as she talks??

It's 4:00 am before the work is done, Madison stays up for an extra half hour to hang with deckhand Parker McCown and now I'm wondering who's on the early shift.

There's a one-month-old baby on the charter, can you imagine traveling with a child that small?? They know not from luxury. Georgia wakes up to complain that Madison hasn't completed the work Georgia left for her the night before, erm, that's YOUR work. You have zip to complain about.

AND SAY THANK YOU.

Adam ponders the nature of his attraction for Jenna, he's been infatuated before asea, so he's aware of how quickly things can go sideways. Fortunately for him, Jenna is all the way into him as well, hence her spending every waking moment in the galley making wet, shiny eyes back at him.

Breakfast time! LOOK AT WHERE THEY ARE! 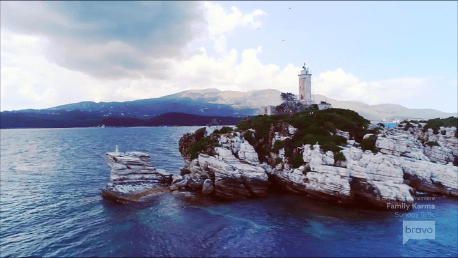 Jenna and Paget rake Parker over the coals for wearing a tshirt and not a polo shirt, he doesn't think the guests care. He's wrong, but I don't understand why it's always Paget AND Jenna telling him things like this.

Georgia confronts Madison about not getting all Georgia's work done.

Madison is frustrated by being directed by everyone, she politely asks Georgia to be careful in how she speaks to her.

The guests are going to be jumping off those cliffs we saw above!! That's so awesome. They head back to the Parsifal III in time to set up for sailing. There are 21 knots of wind, that's quite a lot. Captain Glenn decides to only put up two sails: 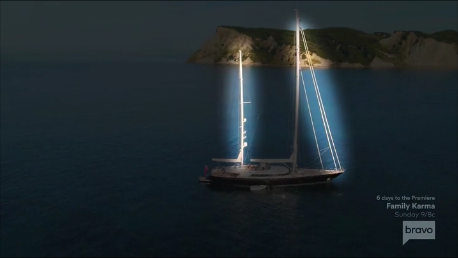 I love that I'm learning about sailing but I absolutely do not like the music they're using this episode. It's not bouncy and fun like Below Deck usually has, rather it's some bargain bin Indiana Jones shite. Boooo scoring.

We are at a 20 degree heel, you guys! The baby is up on a table and almost goes flying, good catch daddy Adam Shor!

Paget heads downstairs for a break, leaving Parker to be taught how to lower the anchor by chief engineer Byron Hissel.

The guests invite Captain Glenn for dinner, somehow this leads to an exposition on how life is fine if he's single or not. Is there an implication that the Primary Charter Guests Sylvia Hampel is being...friendly? I did not get the impression she was doing anything untoward at all.

On to Parker, who asked Ciara if she wanted to eat first or after him. She said he could eat, then came down and ate anyway, freaking him out as Paget told him clearly to make sure someone was always up on the deck. He tries to get up to leave, but Ciara is being impossible, AGAIN, undermining her boss/boyfriend's orders through poor Parker. She finally gets mad and goes upstairs, calling HIM an asshole. Honestly.

More flirting with Paget and Georgia.

Ciara goes up whining to Paget about Parker, who shows up mid-rant. She's just so touchy. Parker, to his credit, explains clearly about meals, Paget backs him up and Ciara says it.makes.sense. She was all mad and took off all the cushion covers to clean the clean covers earlier, so now the guests want to go to town but she has to get the clean cushion covers out of the dryer first.

The guests overhear the discussion, but really: Parker is once again in trouble for speaking clearly. Honestly.

Omigod, I had so much anxiety watching them loading that baby onto the tender. Oh my goodness.

Other things Parker gets in trouble for? Asking for club soda, being told he can't have club soda, spying someone else's club soda and when he asks about it: is told his attitude is "heavy."

Jenna said NO, PARKER, that should be the end of it!! Because she's his mom and he's a toddler?

It's almost supper time, the guests get ready and where is Madison? Doing the turndowns that took sooooooo long yesterday. Jenna is rude about it over the radio in front of everyone.

I would think the chief stew would like one of her staff to take the initiative, right? Nope! Lemme guess: Madison has an "attitude" too! For the record, there were no guests where Madison starting cleaning.

Jenna starts calling Madison to help serve dinner, but she's too busy bitching to Georgia about Jenna bitching at her.

Captain Glenn does his best to keep the conversation going, ohhh, he does think there might be something with the Primary Charter Sylvia! I think she was just being friendly, she's a business owner, they kind of do that all the time.

The guests and Captain Glenn love Adam's food, but Madison's not enjoying listening to Adam flirt with Jenna in the galley in between serving.

Georgia and Madison get into it a little bit more in the laundry room, come on, guys! You love each other! Captain Glenn listens to them argue in his cabin, then Madison works laundry until the middle of the night.

It's the next morning, time to lift anchor and have some breakfast! A smooth docking later, we're ready to say goodbye to Sylvia Hampel and clan. That was sincerely a great docking! Much better than the last.

Sylvia hands over a tip envelope with a nice speech, bai guys! Time for tip meeting! $14,000, $1,550 each, yay! Captain Glenn has noticed the bit of tension between crew, this is time to buckle down and fly right. Or sail straight, sports is not my best field.

It's time for a crew night out! Guess who's excited to spend time with the chef and relieve some of this "shmexual shmension"?

Madison and Georgia have "bro'd it out", they get ready together and everyone goes for supper. Ciara hasn't really found her groove with the other women on the boat, it might be from lack of time together or from her inability to do anything other than scream at Paget. Is that from discomfort? Abusing what's familiar? I dunno, but it needs to stop.

They finish supper and head out to a club to do shots and dance, except for Ciara, who doesn't want to drink or dance.

I feel bad for her, she's just in this super negative bubble and can't seem to break out.

Adam and Jenna are all over each other, Madison's flirting with Parker, who is dancing with a local. Boooo

Now Ciara's crying, my goodness, girl. Go back to the boat with your fella and align your chakras. Madison sees that she's upset and sort of...makes Ciara motorboat her? She's determined to make sure everyone has a good time, even if it kills her!

Everyone heads back to the boat, it seems that Parker is not unaware that Madison is hanging out with him in the crew mess every night to see him.

But apparently Parker has a hard time falling in love. Okay.

Adam and Jenna cuddle under the stars, awww.

But yikes, I think she likes him better than he likes her. Maybe not, he's all over her in the kitchen the next morning. Hmm.

Captain Glenn heads into town, leaving the boat in the hands of Paget and Byron. Ciara gears up to go into town but the grinding of the Parsifal up against the dock stops her in the her tracks and sends her running to find someone on duty. That's thousands of dollars in every scrrrrreeeeech. We're out!