Everyone ready for some bad choices on Below Deck Sailing Yacht? ME TOO! Rolling into my recap of BDSY S2:E03 Smoldering Secrets after the break!

Speaking of bad decisions...we left First Mate Gary King bedding down drunkenly in a guest cabin with his deckhand Sydney Zaruba. She was determined to break off a slice of Gary, and hey: mission accomplished! Not to be to much of a buzzkill (hahhaha I'm a total buzzkill), here's why Gary should not have done that:

Sydney does her worst walk of shame ever, I'm wondering how much she remembers. She moves quickly through the crew mess where Chef Natasha De Bourg says good morning and gets a Sydney-shaped blur in return.

Also: didn't a steward JUST get fired on Below Deck approximately five minutes ago for using a guest cabin for sex without permission from the Captain? Hm?

Gary is much perkier when he strolls through the crew mess, on the way to the cabin he shares with Captain Glenn Shephard. Ten bucks says the Captain noticed he was sleeping solo last night.

Chief steward Daisy Kelliher and third steward Alli Dore are already all over Sydney, what happened?? Well, we heard what happened and see, when two people kind of like each other and drink their bodyweight in alcohol, sometimes they take off their bathing suits and forget where they put them. The end.

Alli is particularly shocked because Gary was hitting on her all night, not Sydney, but Alli kind of faded out around the time Sydney and Gary picked up speed.

Gary and Sydney weren't the only schwasted cases last night, young deckhand Jean-Luc Cerza Lanaux drank an entire bottle of Jack Daniels and spent most of the night and this morning puking it up.

Chief Engineer Colin Macrae doesn't believe Gary when he says he maybe got a cheeky little kiss from Sydney, nobody does, Gary. No.Body.

Captain Glenn calls chef Natasha, Gary and Daisy to the crew mess for a Preference Sheet Meeting, wooooo! I love those!! Show us the paper!

Dr. Nichols is our charter guest, but she ...doesn't have a first name? And she missed the plane anyway? WHAT IS GOING ON?? 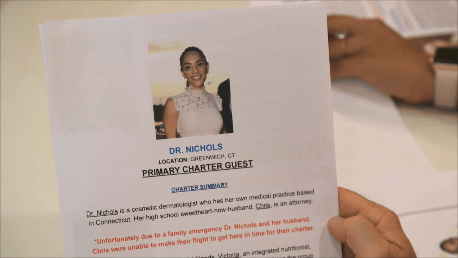 So no primaries. They're paying, but they aren't going to be on the charter, leaving friends Victoria Gregory, Ryan Gurl, Hannah and Andy Weber to rule the roost.

The crew works on cleaning the ship for charter but Daisy absolutely loses her shite over a crew member (COLIN) using the bathroom "after it's been detailed."

This was literally a several minute vignette because someone peed in a toilet that had been cleaned for guests. Wait until she sees what Gary and Sydney splashed around the guest cabin!!

Second stew Dani Soares does notice that next, the guest bathroom is in even worse shape hahahaaha just throw those sheets directly into the wash. They're covered in Sydney's cheeky kiss.

Daisy is furious, she calls the whole crew to the Crew Mess for a Come to Jaysus Meeting. This includes Captain Glenn, so nobody admits to using the guest cabin. But Sydney already admitted she slept there with Gary to Daisy, so I don't know what that bit of theatre was for. I guess as a warning?

Dani calls Gary down to the guest cabin where there are some very suspicious handprints in the dust on a ledge; I don't care about the handprints but you call that a clean room????? There's enough dust to leave identifiable handprints!

Finally the boat is clean and it's time for our Primary-less charter! Guests are heyah!

They counsel each other to not be too impressed with the supersailingyacht, that would be
"peasant" to show appreciation for the spectacularly beautiful Parsifal III. Wow. It's pretty JV to pre-coordinate your reactions to a truly gorgeous piece of machinery.

Because the Parsifal III is a sailing yacht, it's smaller than something like what Captain Lee Rosbach usually pilots. I think this is why Captain Glenn is so much more of a hands-on crew member, here he is lugging suitcases with the rest of the deck crew while Daisy takes the guests on a boat tour.

A couple of guests forgot themselves and commented on how beautiful the ship is, so there. They are extremely high maintenance, 100%. The Interior is going to have their hands full.

As is Gary, up climbing the sails and almost falling off even though Captain Glenn told him to tie off to something. Arsehole. This means they can't get the main sail up right now and the ship looks like a 5th grader with a missing tooth.

The guests not only want very specific catering, they also want creativity and the crew working to make their experience unique and beautiful. Daisy hates that. Just tell her what you want!!

So I mentioned that Jean-Luc is super young, he's also very green and incredibly tall. Gary's his boss and he's ...not a good one. He openly criticises Jean-Luc without being constructive and he's forcing him to switch cabins and bunk with Captain Glenn. Now, Jean-Luc will fit better in that bunk bed (he's almost 7 feet tall), but nobody wants to bunk with the Captain.

That's so weird that Captain Glenn doesn't have his own room somewhere. It's just not as big as some of the other ships we're used to. I can't imagine Captain Sandy bunking down with Hannah or something.

They anchor in a different part of Croatia, time to get ready for supper! I am pretty sure it's going to be late, at 7:45 nobody's even dressed besides Andy Weber and he wants to eat NOW.

Gary straps on a proper harness and climbs up to fix the sail attached to the unironically named "donkey dick." They call it that over and over, this is what it looks like. 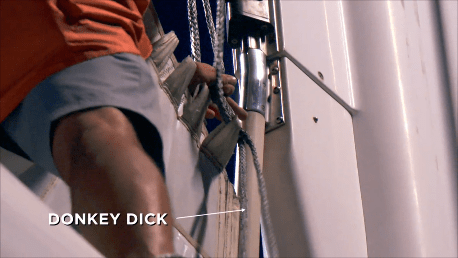 That's not my caption, either. Captain Glenn gives us a whole tutorial!

Daisy has decided to let Dani serve supper to the guests so she can teach Alli how to move faster in turndown service. Good luck with that, here's Alli carefully fluffing a toilet paper flower.

Gary put Sydney on night shift, she cannot figure out what's going on. He's been all work and no flirt, when less than 12 hours earlier he was...attached. He can barely stand to be in the same room with her, she has no idea how to act.

The guests go to bed at midnight, Sydney works all night and it's the next day all of a sudden. Uh oh, Andy the guest is sick. He has a fever of 101 degrees and he feels terrible. This is red alert for COVID, what are the protocols? Captain Glenn calls his medical person right away but of course: we don't know for sure that's what it is.

Andy's wife Hannah Weber has her temperature taken and is sent back to the master guestroom to quarantine with her hubs. A doctor is called and all guests have to stay in the their cabins until testing can be done.

The guests are pisssssssssssseeeedddddddddd. They are going to be removed from the sailing yacht and moved to a hotel for quarantining. If Andy does test positive, the crew has to do the same. These are COVID-19 protocols. Chef Natasha is freaking out: do they have COVID? Does everyone have COVID??

The angry guests are walked off the yacht, Ryan is particularly mad but what can the crew do? It's not like it's a surprise that COVID exists and that health will take precedence over a super fun vacay in Croatia. Honestly.

The guests are sent to wait in a hotel, the crew sits around and waits to hear the results of Andy's COVID test and we're out! Until next time, everyone. Cheers!