We're zipping right through this fourth season of Black Mirror, I've liked most of them, except a couple of cheap shots *sideeye Crocodile* so I'm absolutely game. Rolling S4:E05 after the break.

We open with a trio in black and while, two men and one woman in a car, driving across a wasteland. They survey the barren landscape marred by the husks of destroyed vehicles, we must be in a dystopian future. There aren't any pigs any more (fanks dogs), Clark (Jake Davies) muses that he wouldn't want to be a pig.

Is that an option? This is Black Mirror after all. I wouldn't mind being a pig, after all with my intelligence (ahem) and easy-burning skin, I'm practically one already. Plus round.

ANYWAY, Bella (Maxine Peake) thinks that a society full of people with their snouts at the same level as their bums would be an equal one and it's like nobody's read Animal Farm. OR seen that poor sow in the very first episode of Black Mirror ever: National Anthem.

They pull up outside a building, inside is a dying man (I fink) with drugs (maybe?) Bella's promised to her sister. Anthony (Clint Dyer) in the passenger seat doesn't seem to have any skin in the game, but Clark's the one whose got to do the murdery bits and he doesn't want to.

Nope, I lied to you, they're all in it, Anthony and Bella approaching the quiet building while Clark breaks into a van outside just like I would, lots of squealing and overreacting. He tries code after code on the engine while Bella searches for a numbered box in the warehouse.

It's Anthony who climbs up to get it, but behind is a small object that makes him swear in fear.

The music is positively Hitchcockian!

The small robot unfolds and becomes the size of a dog, clanking down the stairs to get to a frozen Bella, Anthony jumping in front to have his arm blown off. Then his head KEERIST

Clark gets the van going just in time, Bella and he peel out, followed by the INCREDIBLY FARKING CREEPY ROBOT DOG but Clark does not make it. The robot jumps into the rear of the van and blows his head off.

THEN starts up the van and comes after Bella: what the hell is this robot???

Is this what Anthony meant when he said the dogs got to all the pigs? Do we mean pigs or Pigs in the 70's sense????

Bella hits the underbrush and ends up almost going over a cliff, pursued by the robot dog to the last. She manages to get out just before the car tumbles over, taking the robot dog with it.

Bloody hell, is it dead?? Decommissioned? A rocking car after tells us Bella had better stay present and not make any long-range plans. She stops to dig out one of the small bits of glass it embedded in her leg while the robot tears off it's trapped forearm and heads out. It's not glass RoboRex sprayed around, they look like homing devices and it's about to get very painful for Bella and super gross for us.

She digs it out with a multitool and throws it in the water in a bottle, good luck FreakyFido!

Bella calls for help on her radio to no avail, RotterRinTinTin is listening to every word, having found the bug in the water bottle. It follows her blood trail as she goes radio silent to throw the dog off after a touching message of love back to her home.

I would have been more affected if I hadn't been so concerned that she get GOING, the dog is COMING.

She climbs up a great tree, can robot dogs not climb? It's still armed, regardless.

The dog goes dormant as we set in for a very long wait.

Okay, not that long, Bella falls asleep and just about falls out of the tree, dropping a twig on FreakyFido and waking it up as she struggles to not fall.

Why doesn't the dog shoot her? It can see her, she's within a few feet, why would it kill everyone else so quickly and give her these chances?

She climbs to safety, RoboRex goes back to sleep. Throughout the night she tests the robot's responses, counting backward from 1000 and waking it up at zero until at least it stops responding and she might have a chance to get away.

Once again: the robot can see her, she's easily within shooting distance, this isn't making sense. Unless she's meant to lead it to her safe house or something. Great work on the robot animation, by the way.

She sneaks away as the robot sits dormant, making it painfully over a fence to another large building. Don't move any boxes, Bella!! She gains entrance and searches the place for car keys, finding only shotgun shells and exceedingly posh digs.

FreakyFido wakes up, thankfully Bella's left it a clear blood trail from her leg and it's back on the run.

Oh sorry, she doesn't just find a piano and beautiful crystal vases, there are also long-dead people covered in what used to be blood. She does manage to dig car keys out of a disgusting pocket and pry the shotgun away (don't ask) but stopping to wash her hands masks the sound of the robot dog's entrance.

The robot creeps closer as Bella bandages her leg and cleans herself up and ohhhhhhh.

The robot's gun must have been in the leg it left behind in the van, THAT'S why it didn't shoot Bella. Sorry, was that obvious and I was too busy staring at my fingers to notice? Anyway, now it's brought a knife to a gun fight, will Bella manage to get a shot off?

But so very creepy.

Bella strikes first, throwing a bucket of paint on the presumed "head" and throwing the bucket up against a wall, soon decimated by a small dog-sized robot with a kitchen knife.

She runs outside, we're all panting now, to get into the car...which refuses to start. The music does, we're treated to a rendition of "Golden Brown" by The Stranglers which brings the robot a-running, to gouge out the speakers with it's knife before being blasted twice in the head by Bella.

It shoots out another of those balls of glass homing devices that embed themselves in human skin, covering Bella's face and arms.

She goes to dig out out of her cheek, but

She picks up the radio. She leaves a message of apology for Allie, and Jack for whom she was searching for a replacement. She loves them all.

She prepares to end her life with her pocketknife as robot dog after robot dog approaches the house and everything else we saw today. We go back to the warehouse, what was Bella and everyone else looking for so frantically? 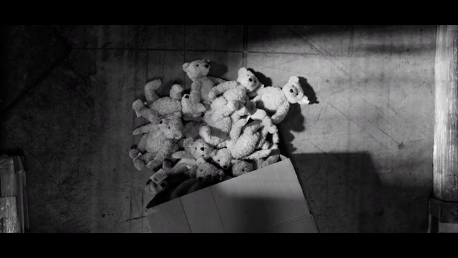 For real, what? Is this some kind of nightmare Jingle All The Way scenario? You know, for those of you who don't consider JATW already a nightmare scenario. And we're out.

Huh. Need a minute to digest. So many questions! Where is everyone? Were they wiped out by the robot dogs? Are the dogs owned/programmed by someone? Are they the new law enforcement? WHY ARE TEDDY BEARS SO IMPORTANT IN THIS NIGHTMARE WORLD? And were the dogs placed behind the teddy bears on purpose???

I won't lie; this was one of the most baffling episodes of Black Mirror I've seen and that is saying something. I leave you with a weird thought I had: this would have exactly been an old-timey horror flick if they'd airbrushed away all of Bella's facial lines. I'm glad they didn't.

It's been a trying couple of years ChezTTM, some of which is my fault and responsibility but there is some I have no control over. What do you do when you can't fix or change something from the past or control the future? I write recaps. Because it is one word in front of the other and one second after the other not dwelling on what might have been. And so come the robot dogs. Cheers.