This is it, we're in the semi-finals of the eighth season of the Great British Bake Off, are you ready to see who's heading into the finals? Me too!! Rolling into GBBO S8:E09 recap after the break.

We open with host Noel Fielding doing his best to squeeze an egg out of a rooster, host Sandi Toksvig susses their problem.

It's Patisserie Week! Yay! I am sad Liam Charles is no longer in the tent to wow us with his flavours but very proud of Stacey Hart for her Star Baker win last time. She worked hard for that!

I am skeptical when judge Paul Hollywood calls this semi-final decision the most difficult in his eight years on GBBO, we all know who should not make the next round and her name is Kate Lyon. She's an absolutely fantastic baker but she's either 100% or 4% and I'm astonished she's gotten this far with some of her more memorable flops. Of course, Stacey's also all over the place, but she seems to be finding her stride late in the competition and that's when you need it, right?

Sophie Faldo has been mostly coasting under the radar with some excellent bakes and some near-perfect efforts, but hasn't really established herself in the past few weeks. Steven Carter-Bailey is the best baker in the tent, he's the one to beat. When he's on his game, he's light years away from everyone else.

Let's see what everyone does on Patisserie Week! I love all the rough-puff butter grating, although it makes the cleaner in me wince and mutter *very hot water rinse before washing* and someone will usually attempt a full-puff in a rough-puff timeline which is always exciting although ultimately doomed.

On to the Signature Challenge! Paul and judge Prue Leith would like to see 24 choux buns, which I only learned of watching this show. See, it's educational! I mean, I know what cream puffs are, I just didn't know they were one and the same. Half the buns will be covered in crackling and the other iced.

Everyone gets to work measuring ingredients while Paul and Prue explain the challenging bits of the challenge, how is Stacey sweating already? It's first thing in the morning! Although. It's the semi-final, I bet they've been sweating non-stop since last week.

The bakers are starting by preparing the crackling, it has to be rolled out and chilled/frozen while the rest of the dough is made. Steven is also red-faced, this is a stressful week so I'll put on some Enya for you lot and burn some incense. 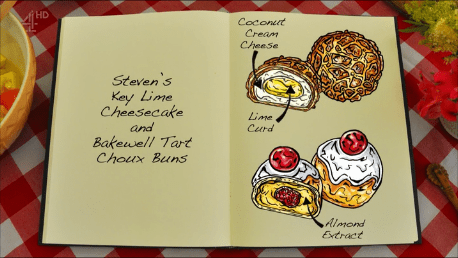 Stacey doesn't like her first attempt at crackling so she starts again. Will she be felled by the Curse of the Do-Over?? 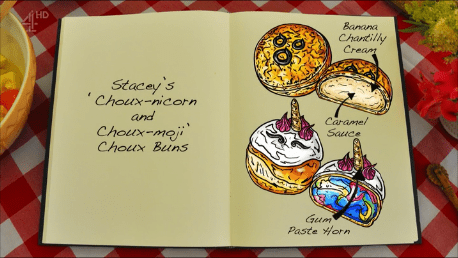 Look how awesome those are??!!

Paul reminds Stacey of her tendency to focus on style rather than substance (something Steven has also struggled with), warning her to get a terrific bake before anything else. In response she wipes her sweaty face with her dirty hands and goes back to rolling out crackling.

Sophie adds the flour all at once to hot milk and butter as she explains her delicious pastries. 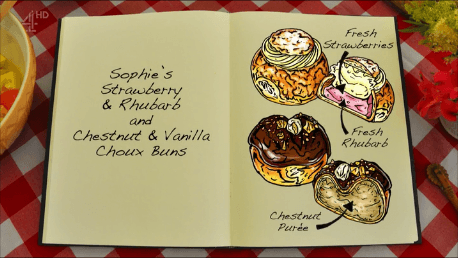 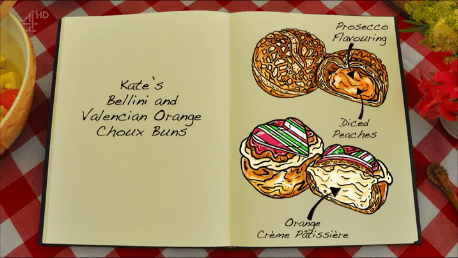 The next tricky part of choux pastry is adding eggs. You can't even go by recipe, you have to add them slowly and see how the dough looks. Basically you need floppy peaks.

There's a massive difference between the colour of Kate's dough and Steven's. I wonder if she used more egg yolks than the mixture he used. I'm more used to his linen-coloured dough, her bright yellow makes me wonder if it will be over-rich.

Hahahahaha like you can be overrich on Patisserie Week!

The buns are in and we're onto fillings! People probably took the fruit out of their plastic containers, washed them and put them back, right? Or perhaps washed them in the containers? Help me out!

Stacey is using a metric tonne of food colouring again, she loves her work.

The first round of buns are out of the oven, did Kate...drop hers? That's not because of the clanger, they just look in pieces.

Onto the crackling bunch, again I'm surprised at how different that dough is for everyone. It's like a little hat! 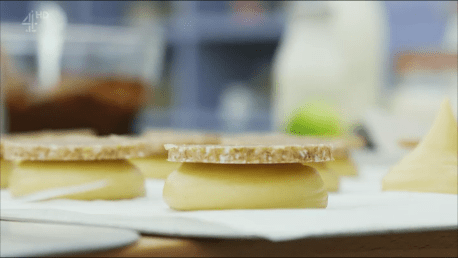 Stacey cries as her toffee sauce goes wrong, she's having a very, very, very, very bad morning! She always gives herself a tonne of work then messes something up because: too much to do, then she's stressed and she cries and it's either amazing or awful. It must be exhausting.

Kate's crackling is really nice but an elevated temperature has damaged Steven's chances. 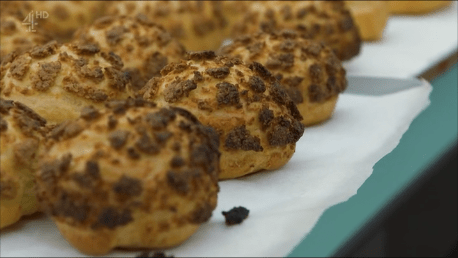 There are only 30 minutes left so everyone is frantically filling their buns as quickly as they can. Too quickly for Stacey, as she's doing it in the wrong order and has to start again. Again. Sandi has to scream at her TWICE to stop once time has been called.

(I think Stacey's chounicorns are the cutest thing I've ever seen)

Steven's up for judging first, his thick crackling we saw above was the entire problem. 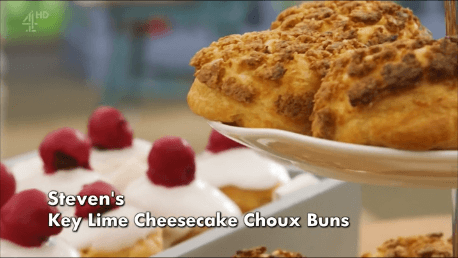 He does better with the bakewell tart buns, Paul calls them "Bloody gorgeous, mate" but they're too sweet for Prue and untidy-looking. 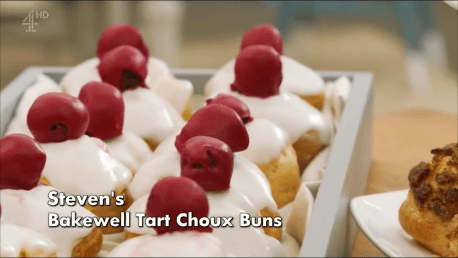 By comparison, Sophie's pastries look beautiful. She does okay, but Paul keeps calling them flat. 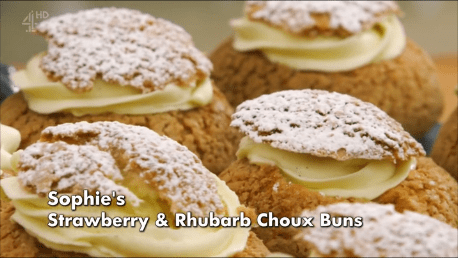 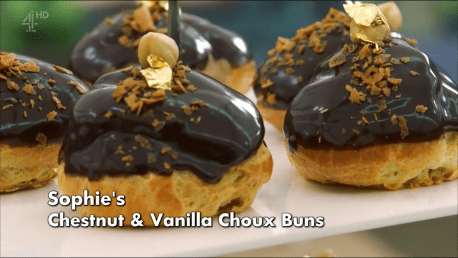 I'm sure Kate will do great, that's usually how these things shake out. She does. 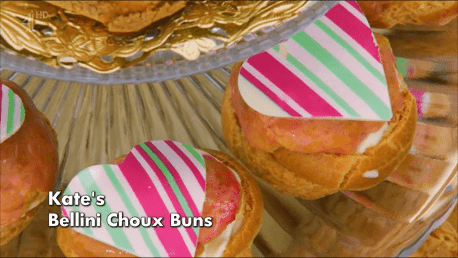 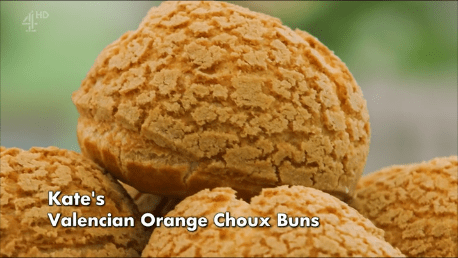 On to Stacey's, Paul says it isn't her finest hour. 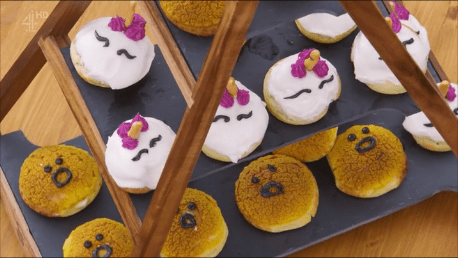 We roll into the Technical Challenge, which is 9 Les Miserables slices. Erm. I'll wait for the picture. This is a long technical, three hours to make this.

Because Prue is just plain mean.

The green layer is the first challenge: how green? Stacey dumps in a chunk of food colouring while Kate and Steven carefully thread some through their batter. As we can see above, they need to be somewhere in the middle of that.

Stacey and Kate mess up the creme au beurre next, it's not supposed to be runny. If you add the butter too quickly, it goes too wet. Sophie's is all fluffy magnificence.

Stacey starts again but Kate throws hers in the fridge to firm up.

Do you see what I mean by the difference in creme au beurre? This is Sophie's: 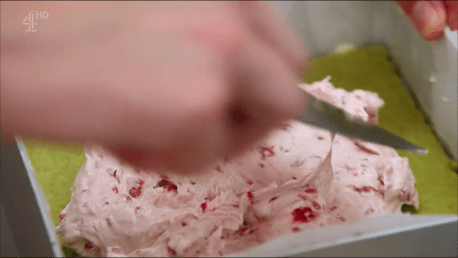 And this is Kate's. 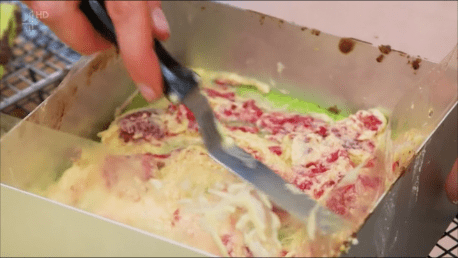 The thing is: she doesn't know it's wrong and I don't know how that's possible.

On to tempering chocolate, which we tackled last time on the Great Canadian Baking Show! You have to get chocolate to a particular temperature then hold it there so it comes out shiny then cool it down fast. For such a simple-sounding thing, we've got four people doing it completely differently.

Oh, some of these are the worst I've seen, these poor bakers. SO many difficult elements, I can't even imagine. Oh wow, there's one that looks even better than Prue's, I think those are Sophie's. 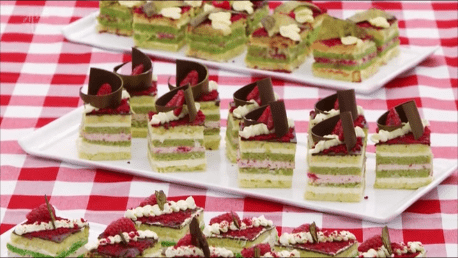 The judges follow exactly my choices (except okay I had Steven in second):

We're into the Show Stopper Challenge already, how will things shake out for our bottom two?? Paul and Prue have asked for a sculptural centerpiece out of meringue including at least two types of meringue. Ahhh meringue is tricky, it likes to crack like a mofo and using it as a support will be difficult. 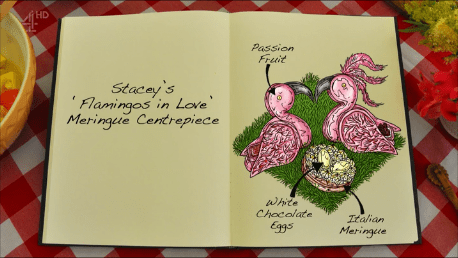 Sophie used to do ballet? And then she went into the army? Those two things don't seem to go together... 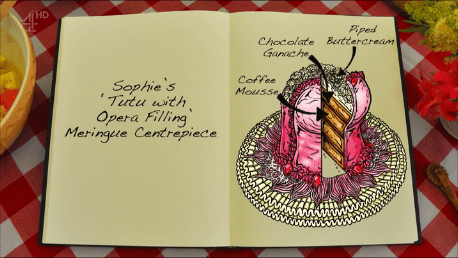 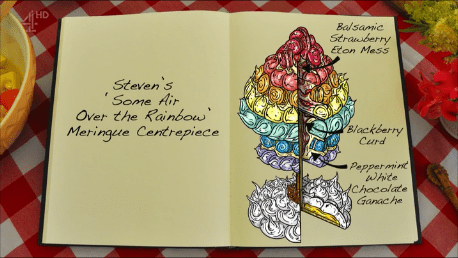 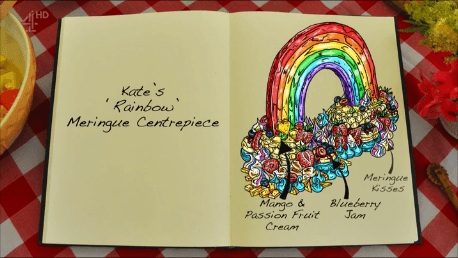 Sandi calls this the gayest challenge of all time and she is not wrong. Happy Pride Month everyone!

Everyone carefully pipes their colourful meringue, shame at least half will break terribly in about one hour.

Most of the meringues have cracked, Sophie's bodice particularly. I love the look of Steven's layers, very solid and pretty.

There are only thirty minutes left to assemble these delicate meringues scupltures, the bakers will need every second of that time as they're all dealing with cracks.

It's so hot in the tent that we're able to watch Steven's hot air balloon basket melt before our eyes. 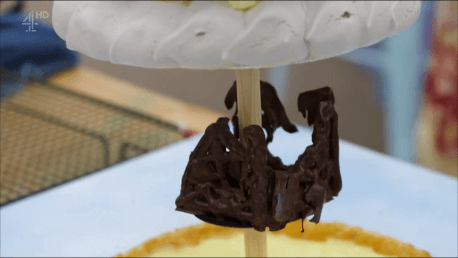 With one minute to go Steven loses structural integrity on one of his top layers, Noel and Sandi can't even watch. 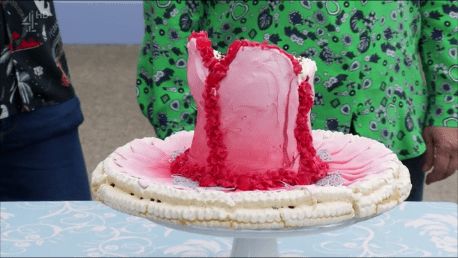 There's a lot going on with Kate's rainbow float, Prue loves it, calling it "Kate on a plate." 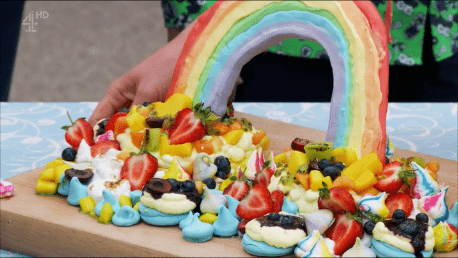 About half of Stacey's flamingo flamboyance is right. 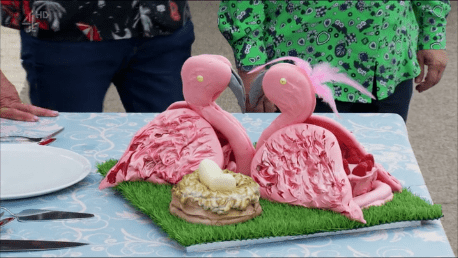 I think we're all sort of amazed that Steven made it all the way to the front with this. His fast bake instead of low and slow has caused the problems. 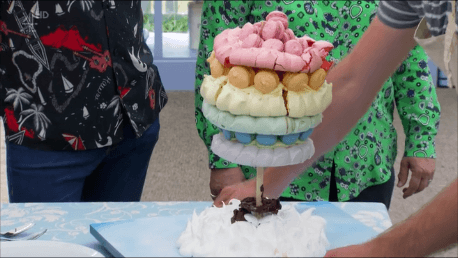 His flavours are good, but his method was all wrong. Paul doesn't know what to do.

I love how Prue jumps in like: I'm not sure either!

How is it possible that Kate is in contention for Star Baker? It boggles the mind. It's always been between her and Stacey for that final spot for me, I guess Stacey will be going home. We know Steven's a shoe-in, he even has his own standard even if he failed to meet it this week.

So, Star Baker and going into the Finale for sure is: Sophie Faldo!

And going home in the most crucial elimination of the year is: Stacey Hart. She cries, everyone cries, she did an amazing job as she goes, top four in Britain!!

Until next time, you guys! For the finale and the end of season 8, absolutely bittersweet. I am going to slow my recapping pace for the next little while as I enjoy the summer with my kiddos, I'll still be posting regularly but not quite as much. I hope it's marvy for you, and that winter isn't too awful in Australia.