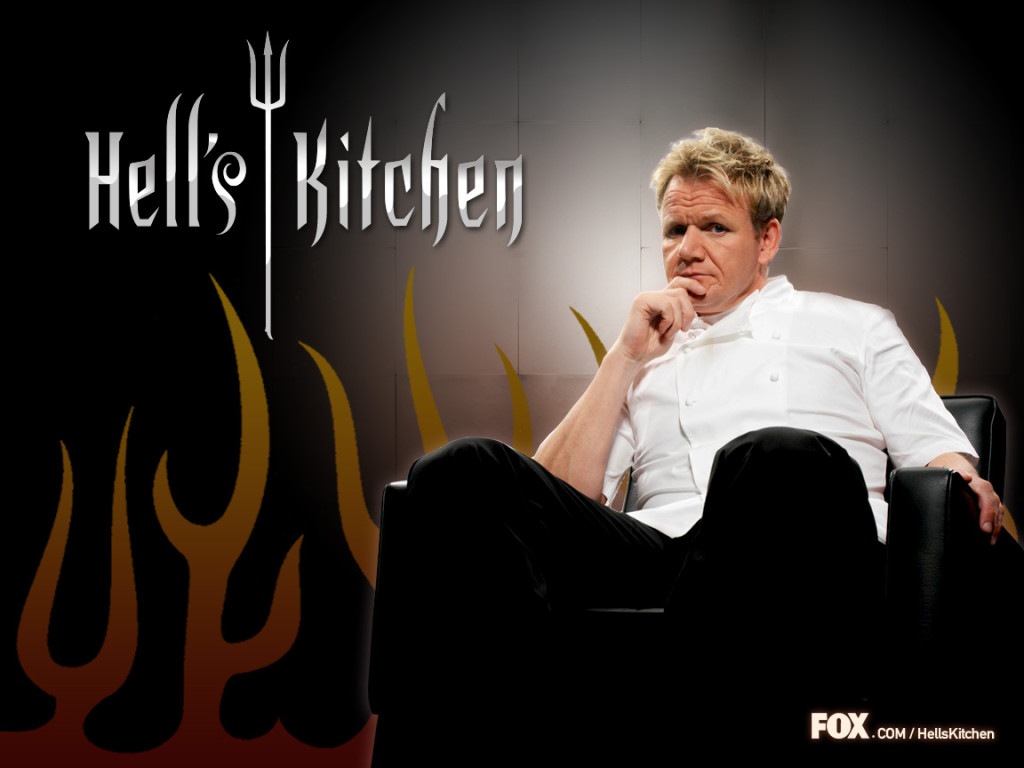 We're back in Hell's Kitchen, sorry I am so late, a stomach bug knocked me oot for a bit. Let's roll!

Last week we lost Frank, seeya misogynist! His bad energy and immature attitude was essentially what was holding the Blue Team back, so he got sent packing. Also on notice is Jared, the last man standing on Hell's Kitchen. He's still cuddling with Ashley lots, so we'll see how much she gives him a hand(y).

Awww, the chefs are woken up by family members! Me and Ariel tear up a little as her mom cuddles her; you never wanna stop doing that, do you? Mine are still portable, so I can get away with it pretty easily so far, but that bloody book "I Love You Forever" by that sadist Robert Munsch sums it up pretty well.

Manda's brother comes too, if stereotypes came from anywhere...Frankie and Manda and it's really sweet, and I totally get it about missing her kids. I'd be a MESS by now. Ashley's dad doesn't make her cry, just tough and that's kinda sad.

Challenge time! Chef Ramsay tells them they're down to the final six, and black jackets descend from the ceiling; everyone is so 'CITED! 'Cept me, I just want this season DONE. Just kidding! Let's keep going. Forever. Awww, their fambly members bring their jackets out! And we're all crying again, but some of us are shouting at 4-year-olds too, because they don't know from QUIET WHILE MAMA'S WATCHING HER STORIES. I'm just kidding, some of those four year olds undoubtedly have Ironman figures to play with loudly and are not being ignored at all.

Well they THOUGHT it was the black jackets in the big gift boxes, but it's actually straitjackets in the boxes. Kristin's parents tried to get her in one of those, hahahaha (her dad does NOT laugh). Ohhhh the challenge is that the fambly members have to create Chef Ramsay's signature branzini dish while being guided by the cooks in straitjackets. That's actually a cool challenge, minus the gimmicky jackets. Ashley's dad has at least one restaurant, heads up other famblies!

Kristin and her dad have a history; Kristin's Bitchin' Kitchen means she's used to bossing him around. Ashley and her dad are so cute, I was wondering if she had two dads that were married to each other, or married to other people as a second marriage sitch, but I can clearly see now he should not go to North Carolina for now.

Ariel's kind of a c-word that doesn't moo to her mom, wow. She says she loves her...and then berates her repeatedly, peppering her with profanities. I mean. Oh and Dannie's sister is a chef! She's hella nervous, though, but not as bad as Jared's mom, who hates the kitchen and I'm guessing has rarely held a knife. She cuts herself in the 4 seconds she holds one and I get it; commercial kitchen knives are huge and very sharp, BUT WHY WOULD YOU GRAB FOOD OFF THE BOTTOM OF ONE??

It's still a team challenge, but the best chef helper will win it for their team. First up are Loren and Ariel

They do fairly well, but forgot the lemon juice finish at the end.

Ashley and Papa Dukes are up next, he owns several restaurants as a matter of fact, GORDON, but his fave is Funky Monkey, not Fcuk My Monkey as Chef Ramsay heard, although Papa Dukes tells us he has said that before and now I can't get a particular Tumblr post out of my head. ANYWAY, they do very well, as to be expected. 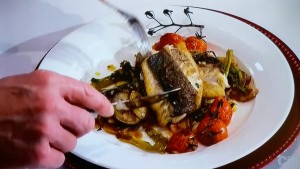 Chef Ramsay LOVES Kristina and her dad's fish, it bumps Ashley's as the best on the Red Team. 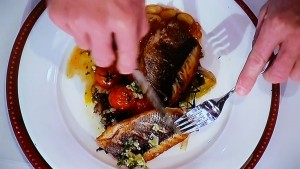 Jared is up first for the Blue Team, and let's just say I hope it tastes better than it looks. The fish is delicious, but there are no veggies... 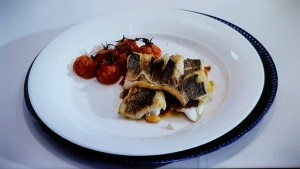 Manda and her bro's looks great! The beans are a little undercooked, so she doesn't get full points, but it beats Jared's. 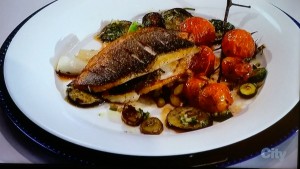 Last up is Dannie's sisters, looks fantastic as well. It is the best dish in the Blue Kitchen and will go up against Kristin's head to head. 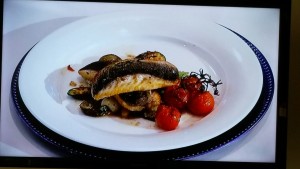 The winner is: Kristin and her dad, which means Red Team takes it again. They're having an awesome spa day, woo hoo! The Blue Team will be doing a whole different kind of cleansing; they have to do the dorms and kitchen and *herk*.

Manda and Jared are arguing over who is dirtier; men or women, but we all know it's dudes. Or women with long hair. Pee or long hair, peeps, pick your poison!

Service time! There are two Chef Tables tonight, Lil Jon is in the Red Kitchen and Cesar Milan will be in the Blue Kitchen, yay! I used to LOVE Cesar's show! I also love Get Low, but I think I'd rather Cesar as a dinner guest. Chef Ramsay tells them the team to finish first gets their black jackets first and that's motivation on the hoof!

Steve Aoki is there with an albino actor that I recognise from The Man in The High Castle (I miss watches! Veronica! Let's DO SOMETHING!) and he's just EXCITED to be there and I dig that! 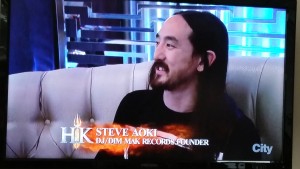 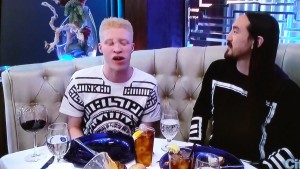 And Katy Tiz, and I absolutely threw an extra T in there in my melon 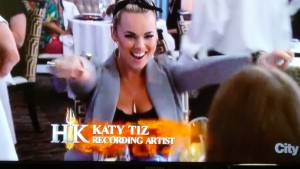 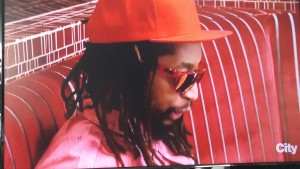 Jared was specifically told to NOT salt the carbonara by Dannie, but salts it anyway, resulting in the VIP table having to wait.

Lil Jon is having the usual effect on the ladies; he must be hella charismatic in person is all I gotta say. Or you know, rich and famous. One of those. He jokes about Ariel and her booted foot, he thought she was just gangsta, taking food to the wall! To the wall! Till the sweat drips down his. And I'm stopping.

Blue Team is all helping Jared, they're gonna help him carry it across the finish line. I don't remember specifically (and asking The Google is cheating. Or not lazy. One of those), but I think Gordo likes to have a mixed double set at the end, so all Jared has to do is hang on and try not to do anything too noticeably shitty and he's guaranteed a spot in the finale thanks to his (presumed) male genitalia. That's not a shot! I have no idea what's in his pants. Nor do I want one.

The rush to get food out is making Kristin not remember how to count to five and Manda how to keep her hair on her head and out of the food. She argues that her hair isn't long and black, it's brown and red and ...well. If even Cesar says "welcome to hell"...Side note: Cesar Milan is hawt AF 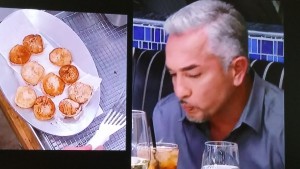 Chef Ramsay teases Ashley for moving slowly, but she gets her strip steaks up and perfectly done. Not doing quite as well are the Blue Kitchen and while Chef Ramsay gently suggests Manda needs a stronger prescription, I miss the old days of Idiot Sandwiches.

But just a little.

The Red Team is doing very well, they've got into a groove for meat and food is flying out all over the place. Blue Team Dannie is having a very hard time with meat, though, and Ramsay has HAD it!

Red Team gets their black jackets for their perfect service; they all scream and hug and cry and it's awesome! Blue Team is still cooking. It will not be a good night for Blue. Since they are joining into one big black team for the next service, all six people get to decide who's going up for elimination.

Lots of back biting; and again; Dannie takes umbrage at being sworn at. This must be a real trigger for her, she shuts down IMMEDIATELY every time someone swears at her and that's just kitchens, from what I remember. Lots of passion and hangovers and addiction issues all flowing together into a panicky two hour dinner rush: someone is ALWAYS cussing. The other chefs don't know how she expects to run a kitchen when she hides from confrontation and they question her passion.

Elimination time: the chefs have nominated Dannie and Manda. Chef Ramsay drags it out by pretending he's sending Jared home (which would be about right), but gives him his black jacket instead. Man he likes to fcuk with people.

He finally decides to send Dannie home; he has come to the end of his patience with her downward spiral. Ashley says nobody felt comfortable working with Dannie and really? I didn't see that. I saw her not being vocal enough and having trouble standing up for herself, which was sort of surprising, as she's a boxer as well,  but there you go. We oot!