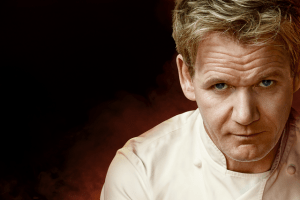 Things got a little crazy last week on Hell's Kitchen, it's hard to believe, but Chef Ramsay sent home TWO black jacket chefs and now we are but three. Let's roll after the break!

Kristin, Ariel and Ashley can't believe Gordo sent home both Manda AND Jared at the elimination ceremony, for two black jacket chefs to be sent home at the same time? Unprecedented.

Kristin and Ashley are conspiring to find weaknesses in Ariel that they can exploit and Ariel, it's just like Chef Christina said: don't even look over your shoulder at these jealous, small betches. Do you and cruise to that finish line, these women just thinking about you right now is THEIR weakness.

Next challenge time! They're outside when an armoured truck pulls up, discharging several suited men chained to metal briefcases. The first briefcase in full of $250,000.00, which is the yearly salary of the winner of Hell's Kitchen (that's the one year they hold that position), and 3 more that the women get to choose from. First Chef Ramsay asks them what they'd do with that quarter of a million dollars, but it's all bullshit because nobody says "pay my bills then roll around naked in the rest" so I won't bother transcribing.

The chefs all choose a briefcase, each one is opened up to reveal a cut of meat transported directly from Bally's BLT Steak in Las Vegas: they have 40 minutes to make a steak and two sides for the bone-in cuts.

Ashley is doing a filet. Neither of us have ever cooked a filet that big, OR a filet with a bone innit, so this should be interesting. She's going southwestern, with twice baked potato and beans and chipotle butter, which sounds... different. She wants a high five for not going Asian!

Ariel is doing the New York strip, but she figures there's nothing to a steak, so she's concentrating on sides. A whole lot of sides, it turns out, she'll figure out what will go on the plate after she's done making everything. Hm.

Kristin is doing my favourite steak: the deliciously fatty ribeye. DROOL. Wow. She's rendering it down in a very hot pan and it looks good, but I'm wondering if TOO simple?

Time's up! Chef Ramsay advises the chefs that he won't be tasting these meals alone, executive Chef Ari Rosenson from Wolfgang Puck's Michelin star winning steakhouse CUT in Beverly Hills will be helping him decide. No pressure!! We'll see if Chef Shrek can suss out the best meat: 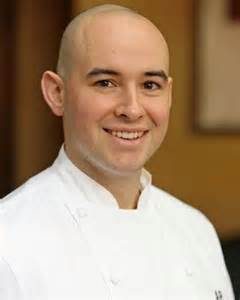 Kristin is nervous when she sees what the other chefs have put up, but she's positive she's captured the steakhouse part of the challenge, let's see if she's right!

Ashley's looks...busy. Sorry, absolutely none of my screenshots worked again this week, I need to find out what's up! Chef Ramsay smirks while Ashley explains how all her components "combine really well" and she interviews that her dish looks sexy, just like her. Calm down, love, if you've got to shout it, it's not really on, is it?

She gets points for the steak being cooked well, if the her pepper side is a little undercooked and needed more flavour.

Ariel and her spaghetti squash side are up next, she gets kudos for everything, if not exactly as enthusiastically as Ashley.

Kristin's very simple meal gets rave reviews, as do her potatoes. Apparently that's the sign of a great chef: a great potato dish and ...sure.

The competition is really close, but the winner is: Kristin. That's how Chef Ari likes to eat a steak. The reward is to fly to CUT in Beverly Hills to have Chef Ari cook a steak for her...and Chef Ramsay! He's going with her!

The rest of the cooks have to clean the armoured car and police motorcycles, Kristin walks out in half a dress / strapless romper and wow. She looks like she belongs with Chef Ramsay, in an arm-candy sense. That's some rack, yo. I have to agree with Ariel when she says Ramsay is "one good looking white man." Werd

Gordo and Kristin visit during the drive; age 27 was a turning point for him, and 27-year-old Kristin also thinks this is her time to shine, baby! 43-year-old me is wondering if it's properly feminist to suggest that maybe a strapless romper sans bra is not a good look for anyone without breast implants. Our bodies just don't work that way! No T, no shade, no pink lemonade, just doesn't give the look you want from those strapless rompers.

Kristin isn't dining with Chef Ramsay after all, her parents are there! Yay! That outfit...they go over what's happened on the season thus far; we get to relive the ashtray dumping fight again with Jackie, yaaaayyy. (Just for reference, when I am yaaayyyying, I am always Tina Fey holding eye contact with Steve Martin in Baby Momma.) Blah blah fambly time BORRRIINGG!! I find Kristin boring, actually, she's not as funny as she thinks she is and I am baffled that she's made it this far, although Chef Ramsay hasn't been exactly spoilt for choice when it comes to actual talent.

Everyone's prepping in the kitchen, more trumped up dramz with Ariel pretending to be mad Kristin got to see her parents. Well. I have no doubt Ariel would have liked to see her parents, too, but I think the producers are reaching, using everything they can that has the word "bitch" innit.

I was a prep cook in several kitchens when young, and I LOVE watching prep montages: it's very soothing. Like the cleaning sessions on Spotless.

This is a big night; this is the service when the two chefs are chosen for the Hell's Kitchen finale. They will also each get a turn running the hot plate, being Chef Ramsay, and this is it: go time. Nowhere to hide on this service, no going into the weeds, even for a minute.

I believe I was mistaken previously, when the chefs all had a turn at the pass, they weren't actually running it, they were sous-ing for Chef Ramsay. So. This is the big one, and THIS is when sabotage comes into play, typically. This is when you see chefs either shout too much or not enough, I have faith in Ariel, but we'll see how Everything-Is-Personal Ashley does. Roll service!

I haven't seen any celebs yet; eyes peeled! Ariel is up first at the pass, and fails her first test. Chef Christina used carrot instead of squash and Ariel didn't catch it. I mean. There is no way in holy hell I would be able to differentiate between baby carrot and butternut squash in a risotto. I mean. Throw in some asparagus or something, give her a fighting chance! She doesn't watch the show, so she didn't know that sabotage was an issue, she thought it tasted good! She does better as she goes, lots of "well spotted"s.

Kristin is up; we're seeing a lot of her this episode, and reality show rules dictate that she must leave tonight, but she's doing pretty well so far. Kristin spots her first test, but it was much easier, she had two next to each other that she could compare. Ashley messes up some fish, and won't answer Kristin at all, only speaking when Chef Ramsay calls her out. Next sabotage is Marino writing a bad ticket, she yells it out before looking at it, correcting herself in mid-shout. Chef Ramsay takes her aside to explain how not to do that. She does catch the carrot, so maybe she heard Ariel's test. She keeps coming back at Chef Christina, who warns her to watch herself, yo.

And now Ashley. I am not looking forward to this. She talks and talks, but it's all false confidence and she can't take criticism whatsoever. I get it, this is a mental challenge, but if she cries again... Ashley isn't talking enough, she's got that deer in the headlights look and she fails even a non-sabotage quality control test.

I would like to congratulate Kristin and Ariel on making it into the finale.

She manages to bounce back without crying any more, and then makes another mistake with fish, mistaking salmon for char. She manages to not fall apart and this is one of our quasi-celebs?

The service went really well, overall Time for elimination; Chef Ramsay asks them to think about overall, who they don't think should be in the finale. Tough job *cough Ashley clearly cough*

The chefs are talking about it in the smoke pit, Ariel calling Ashley out for not showing her leadership skills. Ariel herself gets called out for her attitude and I just think she doesn't mince words, even with Chef Ramsay. She thought the risotto tasted good! She speaks truth to power without being disrespectful, I think this whole competition is hers. Nobody can say anything bad about Kristin because maybe like me, they already forgot any and everything she's done. Booorrrrinng.

At the elimination ceremony, Chef Ramsay asks each of them why they deserve to be there, blah blah etc. Now the fun part! Who do they think DOESN'T belong in the finale? Ashley thinks Ariel doesn't deserve a spot, but Ariel and Kristin think overthinking Ashley has to gooo.

Kristin is revealed as being in the finale, of course, and then Chef Ramsay waxes poetic about how DIFFICULT it is, choosing between the best chef there and the one that dissolves into tears every five minutes. Big shocker, it's Ariel.

Ashley cries and leaves with her jacket, see you, lady! I guess she was able to prove to herself and everyone else that her working with her dads in their restaurants wasn't a detriment, she deserved to be there. Excuse me, Ashley, but I can't help but think that you puffing out your chest and talking about what a "tough bitch" you are is part of the reason you are clearly NOT a "tough bitch." False confidence hides the self from growing, yo. Faking it until you make it just means it takes you longer to get there.

See you next week for the finale!