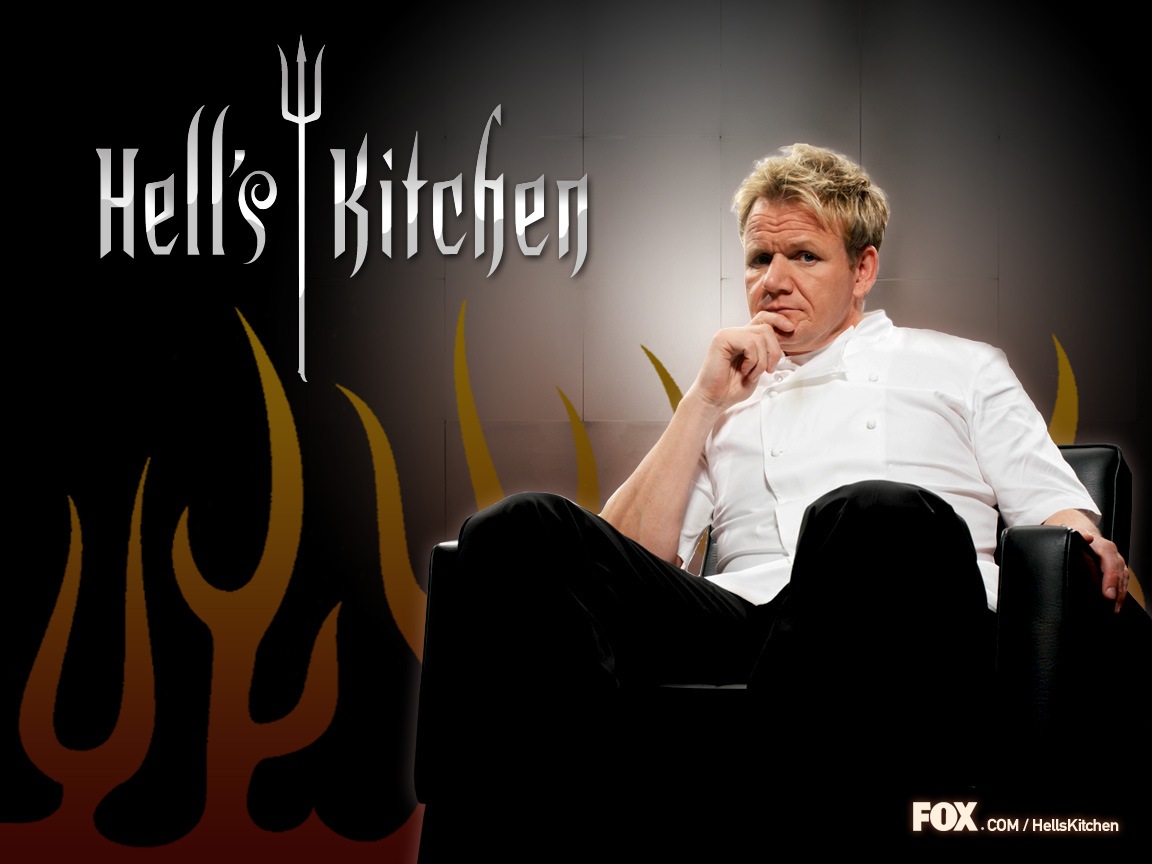 This is it! The season 15 finale of Hell's Kitchen, it's been a HECK of a long haul, with so few awesome chefs and so much stunt casting...but they pulled it out! I care who wins! Spoilers after the break:

Let me just state this right from the jump; I think Ariel totally has this and I do not understand why Kristin is still there. I thought Kristin was stunt casting; pretty blonde with a felonious past with big boobs and and even bigger mouth, but she's held in right until the end, so maybe there's something there. I think they really had to struggle to edit her so she appeared like a contender, but that may be just my bias against smug people who talk a metric tonne of shite while rolling their eyes. I'm working on it (I am not working on it). On to the positive! Ariel is one of the youngest contestants I have seen so thoroughly represent her talent on this show. I haven't had doubts about her at all. Right from the get-go I knew she had the strength, the talent and the wherewithal to win this dog and pony show.

So! No more ridiculous shark-jumping challenges having NOTHING to do with cooking or kitchen-leading talent. Just door opening and cooking and then we're DONE!! The cheftestants are off to spent the night in the Presidential Suite at the Biltmore hotel, then have a breakfast meeting with former winner Paul Neidermayer. I remember when one of my very favourites, Nona, came back. She was all skinny and clearly high AF; it was disjointing and made me sad. Pressure to look a certain way combined with fame is a brutal combination. This is not her, though, this is Paul and I'm sure he will not be all hyped on Adderall.

There are something like 100 people in this massive hotel suite, it's a party, yay! Ariel and her sister hug and cry, aww, their father died early. Chefs Christina and Aaron drag them off to work on their menus, booooooo buzzkills!

They're meeting with Paul the next morning, I remember him! The Meatball! He tells Kristin to be the duck on the pond, legs moving a mile a minute, but appearing calm and focused. Paul lays a bunch of common sense on Ariel, who clearly thinks she's wasting her time, giving the bare minimum of answers to be polite. That's kind of Ariel; I don't want to invoke Asperger's or anything, I'm not qualified to diagnose that (SO STAND DOWN!!), but she seems to be a wee bit shy in the social skills department sometimes. Just very abrupt.

Hair and makeup montage! Kristin looks pretty, and Ariel looks fierce. Like if Pat Benetar was 26 today and Blewish. They come up to the roof...to find Chef Ramsay looking HAWT with a helicopter and bottle of champagne. Let me just say this: if I was meeting Chef Ramsay on the roof with a helicopter and a bottle of champs? NONE OF YOU ARE INVITED. I'd be kicking out the camera man while pulling the pins out of my hurr. ANYWAY, he's taking them on a sight-seeing tour of Los Angeles.

There are a bunch of people cheering for them on the USS Iowa, is that where they're cooking? It is! In a ship's galley, huh. Kristin is worried about how she's dressed, but they should be okay. They have one hour to create five dishes, whoever wins gets to choose their sous chef help first for the finale, so this is very important.

Kristin is doing ribeye again, and you can't blame her, that's what won her the challenge last time. The crowd chanting their names is a little distracting but they pull it oot.

The judges will be from the upper echelons of the BLT Steak empire, first up on stage is Clifford Crooks to judge the cold appetizers.

Kristin has a waygu tartare but my screen shots haven't worked at all the last two weeks and I am not confident now. She does very well, with "quite excellent" being said.

Ariel puts up a cold citrus lobster salad that looks gorgeous, she gets 8, but Kristin gets a 9.

Chris Macchia will be judging the hot appetizers. Ariel is presenting a savoury mushroom cheesecake and Kristin is serving up ricotta and chive ravioli. Ariel gets 9, Kristin's salty ravioli gets an 8.

Manuel Trevino will be judging the fish course, Kristin's sea bass with pork belly gets meh reviews and an 8, Ariel's mustard-dill salmon garners a 9.

David Craine will be judging the chicken dishes, Kristin's chicken breast with cheddar grits (hey! I have grits! I have to remember to try them!) is massively undercooked to my eye but will get an 8 for sure, at least, oh no, 9! and Ariel's much better dish gets an 8. Whut.ever.

Keith Treyball will be judging the final round, the beef round, which makes sense, as he is the head of ESquared that owns BLT Steak and it is a STEAK house after all, let's see how our chefs do. Kristin basically did the same dish she won the steak challenge with, which makes sense. It does well, for a wet-looking ribeye.

Ariel did hangar steak instead, huh. It looks kinda fussy for a steakhouse, but I bet the flavour is good. Interesting that she went with a more difficult cut of meat; ribeyes can walk up to your plate themselves and be delicious, I just don't know if it's too much, you know? Kristin gets an 8 for her steak, Ariel gets 7.5. What.the.fcuk.

Since Kristin won the challenge (I mean), she gets to choose first from the SEASON 15 contestants. She chooses Ashley, which of course makes sense, being that Ashley was in the top 3 and is her closest friend. So what happened to Jared, then, Ashley? Never mind, she's crying already, and I mean this in the best way: I get this is an emotional experience and I cry a LOT about ridiculous stuff (I was a total box of kleenex during the first season of Last Tango in Halifax) BUT, come ON.

You've got to be fcuking kidding me, Ariel picks "beast on the line" Jackie as HER FIRST PICK. Jackie. The chef with 3 months experience. I can't even see straight for a minute. 32 minutes to show being over and me never watching it again, heard? I can do anything for 32 minutes, even without commercial breaks. Join my last Hell's Kitchen hurrah, won't you? Pop a wobbly top!

Team Kristin: Ashley, Frank, Joe, Chad (instead of Jared, which vastly disappoints Ashley, who was looking forward to more time to alternatively berate and be stroked by Jared)

Kristin wants a Hard Sear, everyone get that? Ashley don't curr, she's still pouting about not having more Jared time.

Ariel whips through her menu with her team, I just wouldn't recommend doing that with You Know Who sitting there flipping her hair.

Prep time! Ariel is happy, she trusts her people and she's ready to do her victory lap on her way to BLT Steak at Bally in Las Vegas. I don't even care if that information is wrong, I've been two seasons off this whole damn time and none of yous said ANYTHING!!

Kristin is a drill sergeant, not trusting, not happy, she's locking it down tight for her backups. I bet Jackie would appreciate that right now. Ariel's easy-breezy attitude is making her worry. You know, with just three months experience under their belts, some people might find it hard to trust their "culinary intuition" but not Ariel! You'd think marine Frank would like being told precisely what to do, but I forgot, Kristin has a bagina and he just can't work like this!

Ariel's doing Octopus salad? And people are ordering it????? Rich people are fcuked up, man. Manda immediately screws over her kitchen. Kristin gets her parent's ticket as the first up, it's not good. Frank is screwing up that kitchen.

Dannie doesn't want to be there; her messed up pork chop is telling that tale. Joe is messing up regular stuff, and hey! Guess what! JACKIE is killing Ariel right now! WHUUUT??? Who saw that coming?? Anyone?? Jackie actually cut down pieces of sea bass for WHY?

Another raw porkchop comes back to Dannie AFTER being served, she's had enough, she's OOT! She didn't ask to come back and be yelled at some more, she's outta there.

Over in Kristin's side, Chad's brought up a raw salmon and honestly, Chef Ramsay still has to prod her to yell, I mean. It's the finale! Of SEASON 15 APPARENTLY! She should have this by now!

Big thinking montage after service, Chef Ramsay pretending to mull over the two cheftestants and think about this really.hard.decision. I mean. Of course Ariel will win. He calls the chefs down for the last elimination ceremony of the season. He sends them up to their doors; only one of which will open.

Deuces, Ramsay. If you'll excuse me, I have 15 episodes to re-tweet and tumble. Oot!