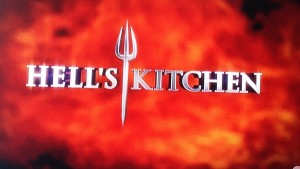 Welcome back to another week of Hell's Kitchen! Everyone ready to run with 10 Chefs once Again? Awesome! Let's spoil like mofos after the break!

Last week we were still up a chef, so Chef Ramsay decided to keep both Chad AND Dannie, but switch them onto other teams. Back in the dorms after, is it wrong that I'm bummed that everyone is chill? I want Jackie to lose her shite and dump and ashtray on someone so I know I've seen the last of her stunt-casted arse. Sorry whoever gets ashes dumped on them, though.

Dannie and Chad were both blindsided by their nominations; Kristin calls the Red Team Chad's Angels and Iwillnottalkabouthowfeckingstupiditisthattheyimmediatelymarkthemselfasanadjuncttoadude because fun, right? And the show is already so outdated, with it's pitting women against men in the first place, playing into the old "who's better in the kitchen?" tropes. Back to the fun: Chad loves Chad's Angels, yay!

The next morning, they make their way slowly to the kitchen behind Ariel on crutches to find a bufffalo. That's right, there's a bison in the dining room and already I can feel my food safety OCD rearing it's furry head.

Gordon introduces them to Jack the American Bison, the biggest 12 year old anyone's ever met and Jackie poops her pants. Figuratively. Then Jack pees on the carpet. Literally. Then poops. I'm gonna need a Xanax and a minute.

Lemme be straight. I love animals. I do not love animals using a fine dining room as a toilet; that's probably why there are all these silly "no animals in the dining room" rules. Anyway, let me shut up, back to the show!

Jack is a little skittish, so he starts moving around, freaking out Jackie, who calls herself a city biatch not ready for a bison to eat her face. Don't be silly, bison just eat grass! They're like cows dressed up like Vikings, and very tasty! The challenge is to cook with bison and that seems a little rude that we're gonna meet Jack and then pick out parts of his friends to cook for acclaim. Bison is super lean, that's what makes it tricky to work with, it can dry out quickly and go gamy easily. I made the most hipster-iffic sounding Bison Burgers on my old cooking blog (I was a baker and sous-chef many many moons ago, before my forays into the oil industry), check it oot.

The chefs are split over 5 cuts: Ground, Top Sirloin, Filet, Rib-Eye and Flank. They have several county / styles of cooking that they can use to prepare their meat, they just have to choose using a bow and arrow. That's right: Chef Ramsay is arming these aholes.

Jackie and Jared face off over Ground Bison, Jared wins the shootout and chooses Spain for them. Ashley chooses Thai for her and Dannie and their Filet. Chad and Manda have a super close battle but she wins and goes with Italian for their Flank steak cuts. Ariel takes Joe out to choose Japanese for their RibEye steaks and Kristin oopses to let Frank go with French for both of them.

They only have 40 minutes and nobody helps ol' wounded Ariel carry her meat, whut?

Ashley chose Thai because Her Two Dads have an Asian restaurant and she is planning to rock this mutha. Jared helps Joe out with his Japanese dish, saying the only experience Joe has with Asian cultures are the massages he gets and the carryout after.

Jackie is making a Spanish Cheeseburger and PLEASE let the ashtray dumping happen soon! I can't take this person seriously as a chef! I mean. Spanish.cheeseburger. Which means a hamburger with sardines and I can't even. I think it evolves to meatballs, and good luck, Meatball!

Dannie is making mostly Thai side dishes, which makes sense, that's what Ashley is doing as well.

Challenge time! They must have spent the guest judge budget on carpet-cleaning and Jack, so it's just Ramsay. Up first is the Italian Flank Steak Battle between Manda and Chad; Chad's is first and he calls it Fiorentino style with cannellini beans and gremolata. It gets rave reviews 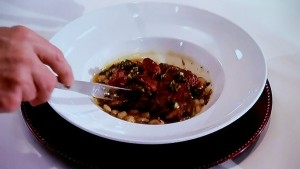 Manda has grilled her flank steak and added pappardelle pasta with a tomato cream sauce. Chef Ramsay and I are confused by the pasta dish; that's a really common egg noodle to use with shrimp (I know because a Weight Watchers shrimp recipe had me looking for that type of noodle for YEARS - not super common in BumCuddle, Nowhere, Alberta, and also because Chad won the challenge last time with a shrimp and pappardelle pasta combo). Chad gets the point for the Red Team. 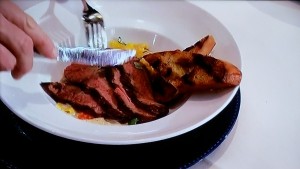 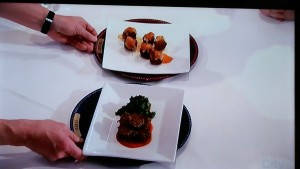 Jared did beautifully authentic big balls with chorizo, er, but Jackie's are dry and point Blue.

French Top Sirloin is next, Kristin grilled hers 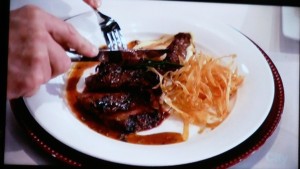 Frank pan-seared his and they're both good, but Kristin gets the point. 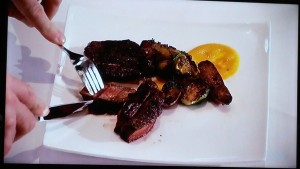 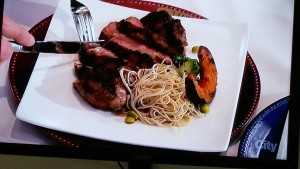 And Joe's messy plate is also delicious, point to both 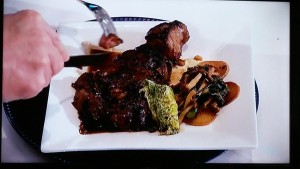 Ashley and Dannie are up for the Thai filet challenge: Dannie's looks interesting and is well done 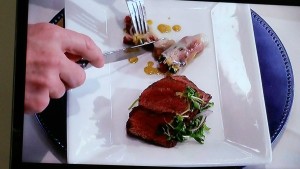 Ashley's made a shrimp pad thai and that seems a little odd as a side dish. Chef Ramsay agrees with me, but the meal is really good and he's stuck again. He gives them both a point. 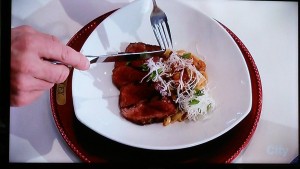 Since they've ended in a tie, Chef Ramsay gives it to the best dish of the competition: Chad. Which means the Red Team is the winner. At this point in the competition, everyone (but Jackie) is strong individually, you can see that, here's when leadership comes into play.

The win is to hang out with some Hollywood actors from the movie We Bought a Zoo and they think it's Matt Damon but I bet it's the animals! They also all win new Vitamixes and hey! I hear those are expensive!

The Blue Team will be cleaning up after Jack, and honestly, I sincerely hope this is just for show and that somewhere a steam cleaner is heating up.

And it is the animals! The Red Team meets tigers and Kristin jumps in there first and did they say they were going to a club later? Because a tube-booby top and ripped jeans seems like...oh wait! Gordon just said they were meeting actors, I bet she was ready to werk.

Jackie is almost Jack-ing in her pants while trying to train the tiger; saying "this is how white people die" but hey! She's still in there!

The Blue Team is also churning butter by hand, now, I have mad respect for homemade butter, but that's why you have a mixer...not ancient ceramic pots. Once again, Manda watches and folds towels while the boys do the hard, annoying work and I would not stand for that. For one second.

The "winners" are now feeding a bear marshmallows from their lips and. Sure. He seems friendly. I'm sure people don't die from that.

It's Cowboy Steak Night at Hell's Kitchen and the chefs are prepping like mofos. Like mofos that can't read, my bad. It's a smaller but completely new menu, Kristin figures it won't be a problem; ranchers aren't picky, right? They just want their meat and fcuking mac 'n' cheese!

Chef Ramsay reminds them that the prize at the end of the rainbow is running a STEAK restaurant and anyone shrugging off the "easy" menu should have just felt their collective butt clench. Open up the restaurant, Cowboy Marino!

Let's see who our celebs are tonight! We have Stacey Dash, who I shall not comment on, given that I gather I just "don't understand" her humour 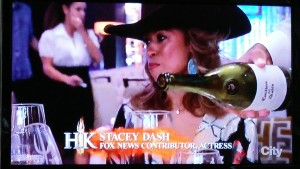 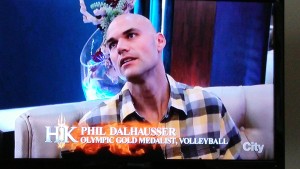 and I'm sorry, I had to take a picture, look at this STEAK!! 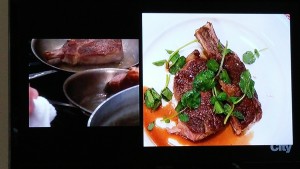 I had a great steak last night, along with far too much excellent Steam Whistle beer, but that is making me droooool. Oh wait, we get all kinds of pics of the new menu! Can't resist! A wedge salad, crab cakes and a King Crab cocktail round it out.

Stacey's table is up first, Jackie is a little concerned that Chad will wreck their flow, which they JUST found, but they send everything out okay.

Blue Team is a little more tentative, Dannie a little hesitant but they get the first appies out properly.

Stacey does NOT like her food, too salty and the other dish was undercooked. I thought Ramsay checked everything, whut? Ariel re-fires without comment, on they roll, just like a real kitchen!

Over in Blue, Frank says "usually I can't stand working with women" and record.fcking,scratch. USUALLY. I. CAN'T. STAND. WORKING. WITH. WOMEN. What the hell is that?? You can't work with a whole other gender?? You only see people based on whether they're innies or outties?? What DAFUQ?? Seriously, I don't even understand that statement. Women make up over 50 percent of the population and if the fact that they're women and not what they do is the problem...that says everything I need to know about Frank. He can handle Dannie though

Am I over-reacting? Lemme know in the comments.

Er ooh Ariel's scallops look majorly over-cooked, eer. And they are. They're black almost. I mean. And then she uses a cast iron and NOT non-stick pan and I think we went over this last week with Dannie...they finally make it out, after some help and it was dicey there for a bit, you know it's getting critical when Gordon's voice gets really high

Blue Team is ahead, moving through entrees, held up only by Joe's garnishes AGAIN, more stops more starts and mashed potatoes sink the Blue.

Blue has recovered, with four people on garnish, yay! They work like a well-oiled machine, awesome! It's great, and surprising to see.

Red is smoking and bitching; Ariel and Ashley are going up as they should, but Ashley thinks she's not the weakest. It gets to Jackie, as always, but I absolutely love that they say it right to her at least. Oh man. Jackie's only been cooking for three months. Three months. That explains the cheeseburgers, the lack of ability to understand basic cooking terms, for the love of. This is exactly what I mean when I talk about stunt casting.

Back in the day, Hell's Kitchen was amazing. Line cooks without formal training and a lot of heart were INSPIRING. There was creativity and you could see people grow and their strength and true passion. Now we have a chef that can't cook make it to the top 10, but that actually makes sense as she has only been cooking for three months and I'm so done. She's only here because she says things like "I hate it that we can't choke people here."

At Elimination, Chef Ramsay asks Jackie who's up: she says Ariel and her. He asks why, Kristin says it's because they always have to carry Jackie, creatively. Ariel says she shouldn't be sent home over one bad service, but he's very disappointed in her. That's actually a good thing, he has high expectations for her and that means she's a front runner. We already knew that, but it's nice to have the confirmation.

The person leaving Hell's Kitchen is...Joe. He's sitting in the back and is as surprised as anyone to be kicked out when his team won. I knew we were keeping Jackie because of the lack of ashtray dumping, but I am SO OVER IT.

Chef Ramsay acknowledges Joe's strength in challenges, but it was his lack of ability to roll in the services that led to his demise. He oot.

So. It's next week that we finally get to see the ashtray dump (on Kristin, it turns out), so maybe, just maybe, we can stop this Jackie-is-a-viable-contender for head chef at BLT charade. And we oot! Love you, mean it!