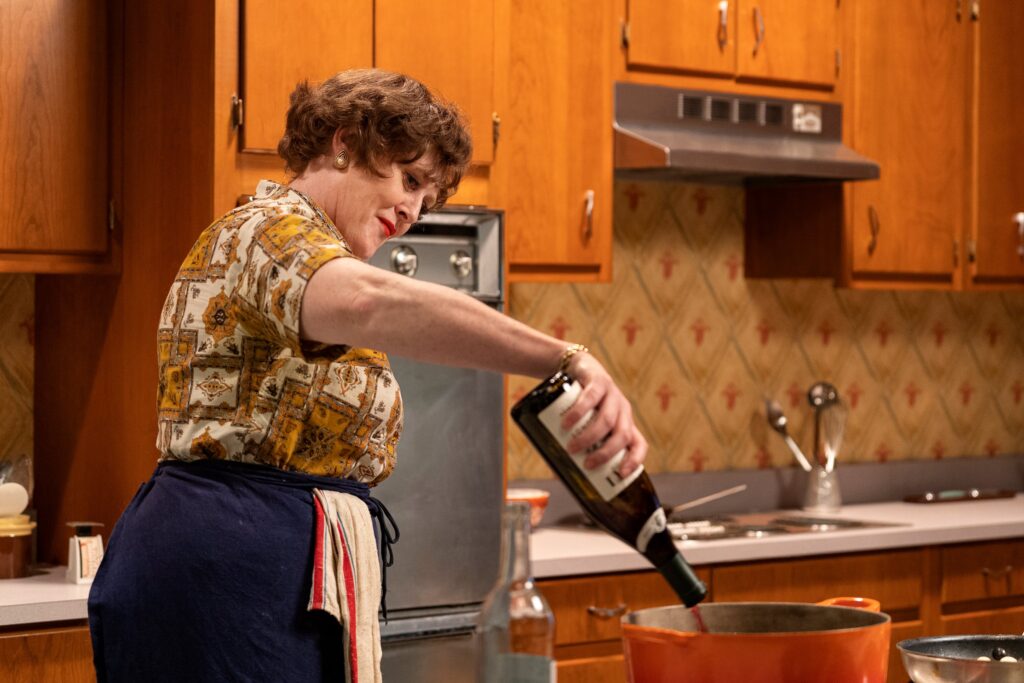 Welcome back to Julia from HBO with Sarah Lancashire and Bebe Neuwith, I think that's enough delayed gratification, isn't it? Let's roll right into my recap of Julia S1:E02 Coq Au Vin after the break!

We open with a shiny new television set being delivered to the Child abode, if only Julia Child (Sarah Lancashire) could decide exactly where she would like it...her husband Paul Child (David Hyde Pierce) pushes it all around the room as she sits and frets about what to do on her first real episode of instructional television.

I'm glad he came 'round; he swore he wouldn't ever have one in the house, ah no, it's that he wouldn't ever BUY one and here Julia took care of that by paying for it herself with her own damn money.

Back to the upcoming show! She can't do omelettes again, no, oooh and finally, a place is found for the TV and a recipe is suggested by our 'perspiring and pungent' Paul: Coq Au Vin. Paul moves to turn on the new set but Julia has a more amorous activity in mind.

I love this definition of Julia Child as a saucy minx in and out of the kitchen; people tend to forget that women (and men) of a certain age don't forget we have wobbly bits.

**Apropos of nothing, I have a great recipe for a Summer Coq Au Vin; let me know if you'd like it!

**Now that we know Alice is a completely made up person, we can analyse what the show is bringing with her portrayal without having to take into account the inconsistency of human experience. Does this signify that even ruthless career girls can be brought to the culinary fold with the right instruction? Maybe that absolutely anyone can cook if receiving the right instruction?

Julia and Paul shop in a supermarket and I'm trying hard not to dislike Paul but his overt snobbery about the goods available makes that difficult. Yes, Paul, not everyone has a butcher and fresh herbs at the ready.

Julia reviews the state of things with great friend and ally Avis DeVoto (Bebe Neuwirth), will she come help at the studio? "I envision a confederacy of women, an estrogen safety net." Avis likes the sound of that!

You know who won't like the sound of that? Perhaps men, who've always had their testosterone safety net and everything arranged in a way that 'everyone' just understands.

**I love this move Sarah Lancashire makes in that scene, flinging her arm over to the adjacent chair. I don't know how I know, but I KNOW that's a Julia Child thing!

But perhaps my oversimplification of what is arranged for whom is incorrect! We see Alice's boss Russ Morash (Fran Kranz) pitching his passion project 'The Advocate' to his boss Hunter Cox (Robert Joy who has been in literally almost everything, and is Canadian!) only to hear that it was rejected and that Russ is angry and feeling dejected.This is not great news given how little he liked the idea Julia's cooking show.

(The Advocate was not a groundbreaking magazine celebrating and supporting LBGTQIA+ voices, but rather some yahoo discussing the art of negotiation)

Julia is worried later at dinner with Avis and Paul, they both try to buck her up. She's not a 'middle-aged dilettante with looks for radio' as she is concerned she appears to Russ! Paul thinks even men will like the show, if only for the wine.

Did I mention Paul was only allowed to chose the wine for Coq Au Vin?

Julia puts her charm to work on young and dismissive Russ; starting with goose live pate at her own house in her kitchen with blue walls and dozens of copper-bottom saute pans.

Oh how I covet those copper-bottom saute pans.

Russ is mid-speech about how important his work is and how unimportant hers is when he finally put the pate in his mouth and I think we have him! He wants to change the way people think! How they live their lives! As does she.

**I used to have a partner who loved pate and now I regret that I never gave it a chance.

Russ goes home to his wife Marian Morash (Erin Neufer) who has prepared his favourite tuna casserole topped with potato chips; he presents her with 'Mastering The Art Of French Cooking" because really: tuna casserole?

We see where some of his resistance comes from; Russ was in theatre and he came to TV so he could make a difference. He thought he would be in a room with Samuel Beckett but just wait until he realises he's been in so many rooms with JULIA CHILD!!

Julia is all nerves the night before shooting, here's a tip for all you with significant others out there: when someone says 'I look awful!' never ever reply 'you look the same.' Nope.

She doesn't know how she's going to make a four hour meal in 28 minutes and that's when it really hits me: none of this has been done before! Now every cooking show in the world has this down pat but she's got to be the first and she is worried she's not up to the task. She is so scared, she asked for all of this. What if she can't do it?

Paul would just like a bit of something something, maybe that will reassure her but she's not having that. She sends him to his own room, tries calling him back but then calls her editor at Knopf instead: Judith Jones (Fiona Gascott).

A disheartening scene with Judith at work; she's in a large meeting at Knopf being called on the carpet for leaving to help Julia instead of lunching with author John Updike. Even I know that's a big deal. Here we get to see Judith's boss Blanche (Judith Light!!!! A pure treasure from Transparent, I adore her) practice the same kind of misogyny we've seen all sorts of men display. So maybe women COULD make it really far, as long as they acted like men and didn't let any other women get too far out of pocket. Judith is given an ultimatum: it's Updike and her job or Julia Child.

Judith arrives late that night at the Child residence; we don't know if she went to the lunch with John Updike or not?

The team is assembled; Paul, Judith, Alice, Avis and Julia work on ideas and practice the filming in Julia's beautiful kitchen. Julia looks terrified at first but eases as they go over and over each step.

They do end up having to cut Paul's wine-related contributions, however, although it was really just a cue card or two. Booo.

As Julia mentions at one point; you do need to leave room for the Coq.

We find that Judith did leave time for the John Updike meeting initially but chooses to attend the taping instead.

Soon enough, too soon it's the day of and the gang piles into Paul's car to travel to the studio. A small bump in the road of Avis dwelling on the loss of her husband on what would have been their 40th anniversary, but Julia convinces her and we are away! Julia is terrified. And not least because this is literally all her idea.

Hurrah for all the people terrified to do all the things they do anyway that were all their own ideas.

Russ Morash is running the studio set like a drill sergeant, he even has time to make rude comments, aww. Julia is horrified along with her terror, the set is all wrong. There's even an electric stove instead of gas, is all her practice for nothing?

Russ has time to check in on Judith Jones of Knopf, look how much mileage we're getting out of that Updike name without having to read any of it! Russ respects that, because of course he does.

Poor sweaty Julia is having a terrible time gathering her composure, producer Alice is sent to be a set helper because of course she is. Avis joins her, invoking the Sisterhood as they glare at a bemused Russ who doesn't exactly know what foot he's put wrong but probably also doesn't care.

Slapstick is ongoing with Paul insisting on carrying on about being involved and holding cue cards, I hope that's not throughout the series although I love other parts that are that type of funny, like the messing with the boom microphone.

Did Julia Child ever actually say "it's just about the most delicious Coq I've ever put in my mouth"?

She's a hilarious improviser throughout; I love the physical characteristics Sarah Lancashire weaves into her character like the little hop she gives before pouring alcohol.

Oh yay, there's even a little time at the end for Paul's wine suggestions, that's lovely! All of a sudden we're done and Julia is crestfallen, even if Avis thinks it's a triumph from the floor.

Why does Russ say "Nice knowing you?" Julia will not be cajoled by her ecstatic brethren and their praise, she's all trembling lips and eyes bright with unshed tears. The lump in her throat is her heart.

I don't understand why they think it's so terrible and embarrassing; she was lovely and personable and charming. Even Alice thinks Julia will be humiliated by airing the episode but TV head Hunter Fox insists on going ahead.

Waiting to watch, Julia confides in Paul that she's going through the change of life. Paul suddenly understands what the TV show is to Julia. It's her baby.

And with the click of the remote; we're out.

I just have to end with this: Sarah Lancashire is a master in physical character embodiment but also, as a friend said on Facebook: she does vulnerability like no other.

**Thank you to whomever chose Le Creuset Dutch ovens throughout! It's not an Aga but I will TAKE IT! The next recap won't be so far away, I promise. Life, you know, it makes other plans. Until the next time! Cheers