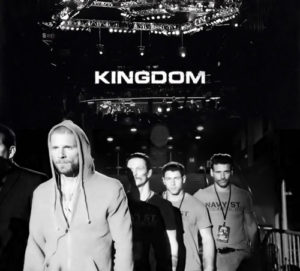 Welcome back to the sweaty octagon with the Kulinas in Kingdom; it's Happy Hour and everyone's drankin!

We open with Alicia hiding the fact that she’s sleeping in her car. She’s doing her laundry and freshening up at the gym while Lisa reads us Alvey’s hilarious letter back to Mario Goldsmith on splitlip.net. It’s funny because I’m not emotionally invested and Alvey is hung to the NUTS. What’s that part about bloggers just sitting back and making fun of people who actually do stuff? Hmm?

She reminds him that he’s a business owner; he’s just made Mario Goldsmith relevant. He needs to know the enemy. YOU ARE THE ENEMY, ALVEY

Well, at least Laura’s talking to Jay today; they’re having tea and ohhhh now we know what’s going on with Laura. Paul, her ex-boyfriend of 5 years, owns the house she’s in and he was the one who took her to the charity function in expensive lingerie. All she owns is expensive lingerie, come on Jay! I totally agree with his question about whether she’s sleeping with anyone else, if they aren’t using condoms. WAIT. They JUST started dating, you can’t get tested that fast for the biggies, wrap that shit up, Jay!

She has sort of reasonable answers for everything; but it’s still a strange situation. She’s told her friends about him, though, she’s having a sexual awakening and everything! She told her friends she’s never orgasmed so much! He’s gotta push, though, she comes more with him that even with Paul? “Oh yes, Paul was too big, I couldn’t take it unless I was really drunk” and THAT is the answer you get when you ask stupid questions like that. See? There ARE stupid questions! Awww, they stop to look at the pic of Jay she took!

Lisa’s in seeing Drew (Michael Graziadei), who’s a sponsor that doesn’t really want to handle Ryan. This guy wants Ryan to address putting his dad in a wheelchair, he’s not touchable right now, even if “this is the last time you’ll be able to afford him.” Hey, does she have any female fighters?

Ryan’s Dad’s sent another nurse packing, he’s easy to take care of: feed and water him. Just not the Tijuana Waterboarding! Was that racial? He asks Ryan for a drink; a real drink and nothing good will come of this.

Alvey’s watching Alicia at the gym, he likes her form (not her Form). He’s impressed that she’s working out every morning from 6 am, too.

Nate’s meeting with a fight promoter Ron (Jeffery Ross), who gives not one flying eff about medical clearance. He has a fight for Nate in one week, whut? Nate has to train and cut in one week and there’s not a lot of money on it? Come on, Nate!

Alvey’s working in the ring with Alicia now; giving her boxing advice and she’s not picking it up all that fast. I am officially not impressed with her fighting; let’s see what 6 hours a day in the gym looks like! Alvey’s a great instructor but she just may not be used to his style of training.

Jay’s shaving his balls in the locker room; “high and tight as per the lady’s request.” What’s Nate doing there anyway? Training of course, Nate tells him about the fight so Jay’s worried now.

Alvey’s in to see Lisa, who’s tired and feels like crap. He starts to give her a foot rub and they talk about Alicia and her fighting style and whatever he does, don’t stop rubbing her feet.

Mario Goldsmith is coming in at 4!

Chistina’s past is haunting her at work; her former pimp Terry (Jamie Harris) is in to see her and it’s super tense.

Jay’s cutting already, giving Alvey a hard time about being treated like he’s second best, there are a lot of other gyms out there…Alvey isn’t letting Jay out of the gym, though, Jay’s “too important.” Jay and I roll our eyes simultaneously. Hey, let’s go over and watch Alicia train some more!

Christina’s talking to Terry on her break; he’s not here for her, though. Don’t worry. A couple of his girls have been lagging, he knows she’s not like that but if the cops show up, she doesn’t know from nuffing. Terry leaves with a Scottish burr “Jaysus, you are sooooo pretty when you’re clean.”

Ryan’s getting his dad drunk; that’s probably not a good idea but Ryan isn’t known for his wise choices. He just keeps pouring his dad straight cheap whiskey and I dunno, man.

Moar Alicia training, now with Jay and she doesn’t take failure well. Who does, though?

Ryan and his dad are loaded when Lisa calls, the sponsors (even Slaughter Water!) won’t touch him until the stuff with his dad is addressed. He doesn’t want to talk about it though, it’s personal! She thinks there might be a way to do it that doesn’t suck, she’ll figure something out.

Mario Goldsmith (Adam Shapiro) is in to see Alvey, it goes about as well as you would expect it to when you start a rebuttal letter with “Your father’s a c*nt.” Mario isn’t a moron though, and Alvey taking the article so personally makes him ask: are you worried? I guess Alvey is worried, although I hadn’t seen it until then. I knew Nate worried him, but Jay and Ryan too? He shows Mario out with a tour, “so next time you butcher me, you know what you’re fcuking talking about.” *big smile*

Alicia’s texting Ryan and is called into Lisa’s office; she was super nervous but Alvey was impressed. And there’s maybe a sponsor interested in her, is she down? Hellzyeah, she’d “sponsor an abortion clinic” SHE SAYS TO EXTREMELY PREGNANT LISA. “My bad.” Is she ready for a fight? Hellzyeah again!

Jamal’s hassling Christina about eating in the dining room – it’s like she thinks she’s people! He hands over her paycheque, less than $500 for two weeks? How do you live on that?

Alicia’s giving Jay honest feedback on his relationship with Laura; if she’s staying in someone else’s house, they’re probably fcking. He’s all: when? I’m with her all the time! You’re not with her right now; what do you think, people don’t fcuk during the day?

He takes a moment

And then thanks her for her illuminating insight into his relationship; his perspective is askew.

Nate’s training and Alvey is NOT HAPPY. They have a standoff where one of them says “I’m leaving this gym right now!” a bunch of times in a row while the other one says “Oh you’re leaving?” an equal number of times. It’s very ‘citing, but it’s Alvey who backs down first.

Alicia’s the last one to leave the gym; she asks Alvey to go for a drink and they eye-cuddle for awhile until he says “let’s not. You’re a talented fighter, you have my attention. Let’s leave it at that.”

I totally get that.

Jay and Laura are screwing outside on a lounger by the pool; that was really great! He’s glad she noticed coz he tried really fcuking hard.

Is he over his freak out now? Oh no, if he was on a freak out, there would be police helicopters and S.W.A.T. teams and he’s not even joking.

Ryan is aroused by his phone buzzing, all texts from Alicia and is his dad dead? I’m watching his chest but I don’t see anything moving. Was the booze to counteract with the meds? Ryan don’t curr, he’s going. Wait. There’s no nurse??! Ryan’s dad chased her out earlier.

Alvey’s home and Lisa can’t sleep; where’s he been? She can tell he’s upset so he tells her about Nate taking a fight. That’s not a good idea. Mario Goldsmith has written another article, Lisa says as she pours a glass of wine, causing Alvey to stare. He doesn’t care, fcuk ‘em, let everyone say what they want.

She wants sex; and “don’t be a gentleman” hahahaha. Yay! They so needed to reconnect.

Jay finds Laura on her phone, how’s Paul doing? But it’s not Paul, it’s her assistant and NO she’s not giving him her phone! She’s starting to see how fcuked up he is, maybe because of his mother and her addiction and abandonment of the boys? I actually think the boys are doing pretty well, considering, but she wants to know if he’s ever been to therapy? Has she…just met Jay? Does he with his oily, oily six-pack seem like someone into self-examination?

She can’t believe he thinks she’s fcuking Paul! But. He’s paying her rent. And I agree with Jay in sentiment if not in execution: all relationships are transactional. Otherwise they aren’t equal. He gets hella aggressive and then tries to apologize by saying “I’m jealous, I’m a jealous fcuking guy!” and then he cries and I WANT to take your side, Jay, but what you just did would terrify any woman alive. Don’t make people feel unsafe. She asks him to leave.

But this hurts my heart

Music montage: Christina’s making some serious dough on her knees tonight; let’s hope she doesn’t spend it on heroin. She throws up before heading out to the john while Ryan goes through his baby stuff in the garage and Jay cries naked by Laura / Paul’s pool. Er. I thought she asked him to leave?

Ryan’s running, finding his motivation and Christina’s back in her fast food gear while Nate stares at the wall and Alicia makes up her carbed.

Ryan gets back to find his dad covered in vomit, he’s so sorry. His dad suggests that putting him down would be an act of kindness…and tell your mother to not come around again.”It’s enough.” And we’re out.

So, Nate’s feeling suicidal (the only thing you can call booking a fight when you just had your bell rung), Christina is breaking relationships down to their MOST transactional basis, Jay’s not very balanced and Alvey and Lisa are FINALLY throwing down. Until next time!