Did you know we're almost at the grand finale of Making the Cut?? I'm not ready to lose most of the rest of our designers! Or Tim Gunn and Heidi Klum, now that I've finally got them back choreographing beautiful clothing for me, wooooo! Let's roll into my Making the Cut S1:E08 Brand Evolution recap after the break!

I said in a previous recap that I had zero desire to go to Tokyo; that's because this is how I view the whole city. 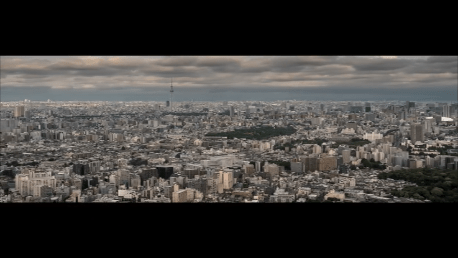 But I forget that there is the occasional oasis of calm and peace, some even filled with turtles. 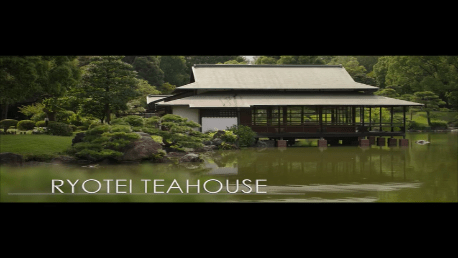 Host/judge Heidi Klum is all tricked out in a beautiful modernized kimono, mentor Tim Gunn does his level best to compliment her but she talks and talks and talks over top of him because that's what she do.

The designers file into the teahouse past the pond full of turtles, awww! We're down to our Final Four:

Watching the group drink tea, I need to go on a tangent for a moment. I love Tim Gunn. He is everything that is pure about this process and I adore him from the top of his head to the soles of his feet. He shows us that you don't have to be nasty to be helpful, you don't have to be mean to be important, you can care deeply for other people and their talent and just be an exceptional person. His integrity and capacity for compassion are so inspiring to me.

ANYWAY! There are four designers and only three spots in the finale, so the sooner Megan scoots her adorable bum away we can get this party started! I'm only half joking, she works as hard or harder than everyone else and I dig that about her, but I've yet to see anything new or interesting from her.

I also think Esther's at risk, she does beautiful, well-cut clothing but her work seems...limited to exactly that, and in a black and while colour palate only.

The challenge this episode is for each designer to create a two-four look collection showing how they've evolved since this process started. I can definitely see Jonny's evolution, but the other three are kinda still doing what they do, you know?

Sander is doing a Ghosts of Christmas Past, Present and Future for his collection, okay he didn't say Christmas but I'm sure he meant it! 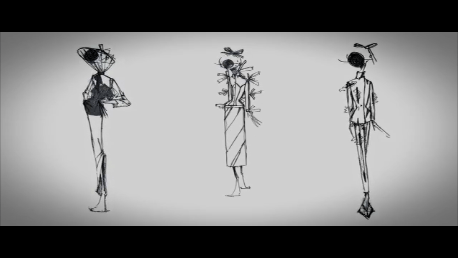 I guess his journey is about embracing the marriage of art and commerce.

Esther has been moving to more feminine shapes, she says. 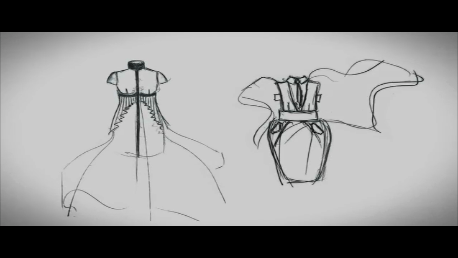 Jonny is actually using his very first collection as inspiration, but updated. 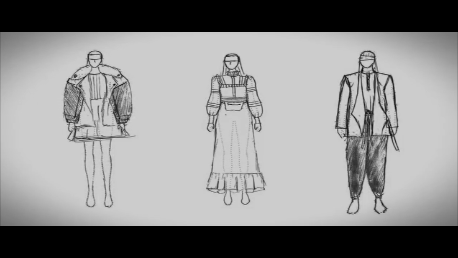 Fabric shopping! Sander is done first and is already directing his team of seamstresses. He gets TWO and a translator!

I love watching Jonny and Megan shop separately for fabric, it's like me in a grocery store. "What is that?? I must make something with it right now!" It's watching inspiration hit, Jonny is fully committed to making a sheer pink silk dress and I would never have expected that when we first met him.

Esther embraces working with her seamstress team, she's used to that, unlike Sander and his one man show. Megan works on getting ready to feed her team.

Jonny has seven pieces to cut out, he's super hyper, blaming it on caffeine but. Okay. It could be, right? He says he's always treated fashion like armor and now I'm thinking of my tendency to do that with makeup. What with COVID, there's been no makeup but also close to zero social interaction, does that mean I'm growing as a person?

Sorry! Sorry! Jonny's armor design esthetic came from a time he needed more protection, now he feels safe and happy and able to allow himself to be more vulnerable.

WHY is this design show like therapy?? I really want Jonny to be happy and vulnerable.

He's certainly openly agitated when his favourite model cancels on him; he had four booked because he's hoggy like that, so now he's dressing one of the men in a dress.

Sure! That's kind of fashion these days.

Heidi and Tim hit the town to try different sakés and learn to count to ten in Japanese. I already sort of know, my kids are in Judo! So like Canadian-flavoured Japanese, maple saké.

It's the next day, Jonny is so in love with his concept of putting a man in a dress that it's literally all he can talk about.

Someone hook Jonny up with RuPaul or anything on the internet.

Time for TimTalks! Esther loves her designs, she's super proud of using white to go with her usual black and I love her so I won't grind my teeth too much about that. She's putting TOP THREE across the front of a t-shirt which makes Tim laugh hysterically. Well, Timsterically. I just remembered she's technically only achieved TOP FOUR at this point, nice flex, Esther! I hope it doesn't create backlash.

She tells Tim that she's tired of making herself smaller, she needs to put herself out there with confidence! She's passionate and emotional, he tells her not to change a thing.

Sander does not get such a glowing review, Tim even calls one of his colours insipid then gives him a dictionary definition at the look of confusion. I don't think Sander needed a definition, Tim, he's accepted that you just don't get it.

I do not like that Jonny claims to Tim that he deliberately booked a boy for his sheer dress, we saw him run around at great length shitting bricks the evening previous trying to find another female model.

Oh look, Megan's doing another blazer! I hope it's got statement shoulders and is sharply tailored! Tim doesn't like her arbitrary use of crocodile-embossed leather but I think it's her favourite part of her designs. She's using it as a symbol of her growth. He tells her to go big or go home, she's the only one here without a winning look.

Tim congratulates all the designers on how great their collections are, he's impressed. Thanks, Dad!

Sander stares at his chartreuse next to his insipid pink, just then I realise I am wearing two layers of the same babysoft pink. Three when I had my windbreaker on and I'm looking for the button that says "I'm In This Picture And I Don't Like It."

Sander decides to just use two colours and it has nothing to do with Tim's critique and la la la la he can't hear you!

Model fittings! The one boy model is swimming in Jonny's outfit, the other boy and girl models have nothing to try on. How can he still have three of seven pieces to design and sew left? He might go down to two looks, they can do between two and four.

Esther is working very well with her team, she asks that they stick around during fittings then gives them thank you cards and hugs at the end. I think they were thank you cards, also that they had her picture on them...

Jonny decides on three looks, Esther is done and willing to help him complete the third look, which irritates Megan. It's like she didn't see Rinat Brodach help Jonny before!

30 minutes out, hairspray and makeup is flying everywhere! Sander's made a Sander-choice about making up his models with giant red splotches on their faces like the Japanese flag. 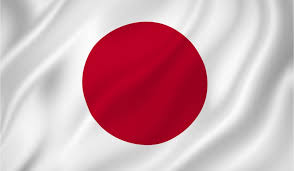 Because of all those people that  never said: hey! I wish I looked like the flag of Japan! 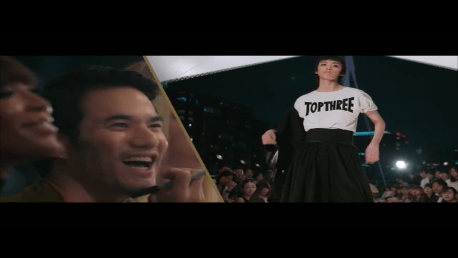 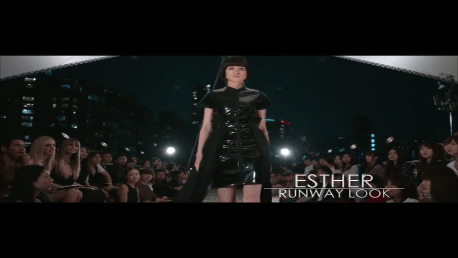 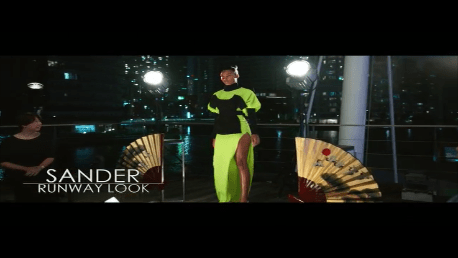 But! It has an unexpected back! 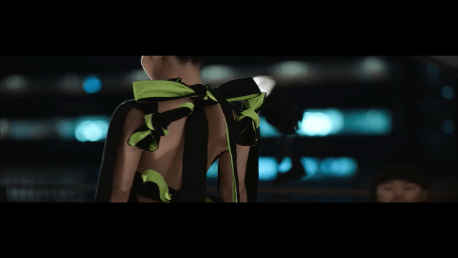 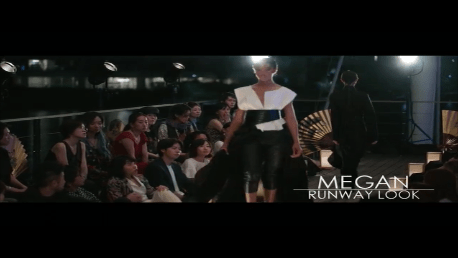 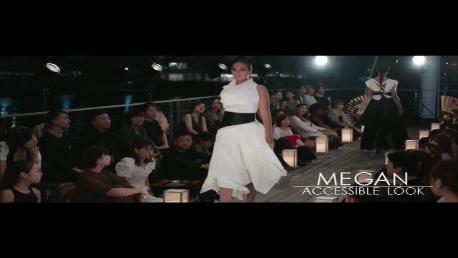 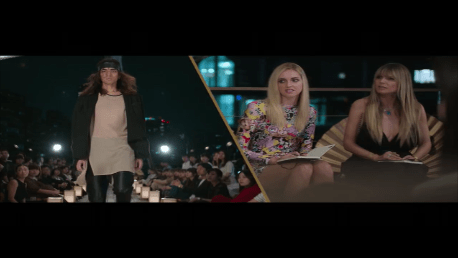 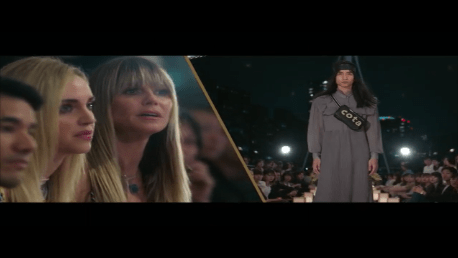 They liked Esther's, they liked Sander's but they were underwhelmed by both Jonny and Megan's looks. They LOVED Esther's TOP THREE t-shirt.

Time for judging! I bet we're going to talk to everyone!

First up is Esther. 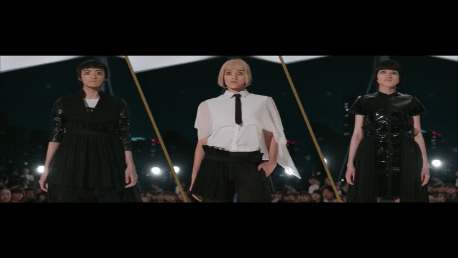 They loved everything, especially her confidence and maybe some of us got teary when Esther talked about putting herself out there and not giving the space to others. It's so easy to do that. But she didn't, and then we find out there was a secret part to the competition: getting along with and directing your team of seamstresses and the translator. Esther was all over her team (in a good way), she manages very well.

On to Sander and his three looks. 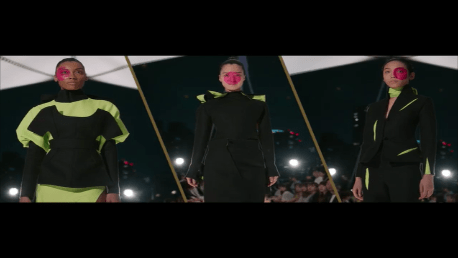 Sander is Making The Cut into the TOP THREE based on his journey from artistic vision to wearability, baby!

Now it gets tricky, it's between Jonny and Megan, she's up first. 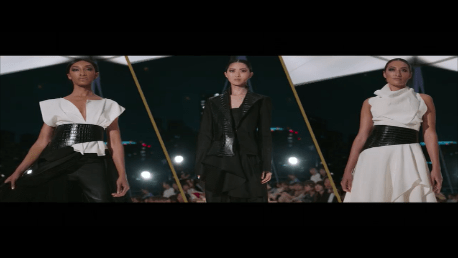 She talks about taking it all the way and lots of other positive things but if you read the judges faces, they all say "I'm Sorry. You've Disappointed Me."

Oh it gets worse in critique, Joseph says he only liked her first look and that was because it looked like Esther's designs, or Jonny's.

Heidi said that same exact thing when the look was coming down the runway, but Naomi disagrees.

*If you would have told me ten years ago that Naomi Campbell would be this gracious, warm and kind human being, I would have taken your temperature and sent you to bed without supper.

Nobody's asking me, but I think it's perfectly natural to pick up esthetics from people you're working around, Jonny only really became successful on Making the Cut when he was partnered with Megan and started to use her style of fabrics. So she used leather like he does, he used silk stripes from her collections, it's all growth.

It's between her and Jonny for that coveted third spot in the finale, it's time to talk to him. 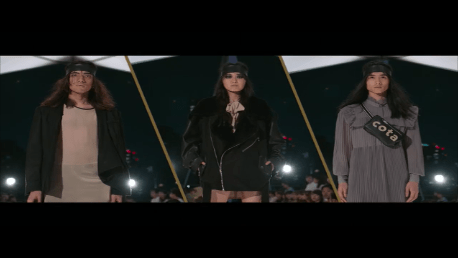 He talks about embracing his vulnerability and letting down walls and letting soft be strong and now Heidi's face is saying "Welp But I Still Don't Like It But Now I Feel Bad." He's crushed when she says she wasn't excited, it almost brings him to his knees.

(Because that's why you have armor. It protects you from feeling like people can hurt you)

Heidi, Chiara and Naomi all already own those clothes, they need NEW stuff! They need his swag on it! Now why should he stay?

Jonny talks about his growth and how much more he has to show, the judges actually kick everyone out so they can discuss the issue properly. It's going to come down to this: brand recognition and it's going to come down to Jonny, because his design esthetic is more diverse. Megan has that one fantastic silhouette, that's all she's shown this series.

The judges call everyone back and: I'm right. Jonny wins the third spot and Megan is sent home crying after a long, long hug from mom Naomi. Ah Megan. I wanted it for you. You worked so hard, every moment.

There's a twist coming next time, see you then! Cheers!