Hi everyone! Did you miss Project Runway during the American Thanksgiving break as much as I did? It's been AGES since we saw our gang of designtestants, let's see what they come up with tonight!

I was so sorry to see Dexter go last time, especially on an editorial challenge, which should have been his shining moment. We also lost Nathalia, which wasn't a surprise once I realised how much she was relying on design input and direction from Jenni.

Back at the hotel, everyone is talking about the double elimination the night before and Cornelius's rise from the ashes; is Cornelius sad Dexter's gone?

Heidi scares them when she tells them there are only two more challenges before Fashion Week, they all counted heads and came up with 3. What's Project Runway doing to our talented six-pack?

Something with air and a buckling up and digging deep; which all adds up to an industrial wasteland guarded by a dog. Oh but this is the Lexus challenge, the Lexus suit Brian Bolain explains what they'll be doing. It's an Avant Garde / unconventional materials challenge, DAMNIT DEXTER! You just had to keep those Mickey Mouse shoulder pads to yourself for one more challenge!

Erin's concerned about that mix, Roberi just hopes the models are up to carrying around pounds of heavy metal. Coz this do look hefty

Lexus commercial: the designers get to drive to Mood to spend their $150 bucks in style in a couple of fancy 2017 something-somethings.

First: the grabbing of the stuff!

Side note: why is Erin always wearing diaper-length shorts and / or most of her upper body exposed?

Mood Time! They have only 30 minutes,  hope they were mentally listing rivets and shite! How come there is never any traffic in the overhead shots? I thought New York was ALL traffic. I saw it on TV so it must be true.

Erin is getting yellow

I sure hope Laurence likewise stretches herself and gets a bunch of leather she can make an awesome jacket with.

Tim helps Swatch! And we getta see him on all fours, which was totally worth the price of admission

Cornelius is going to make an angry butterfly! 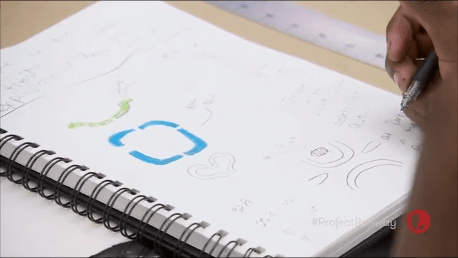 I don't know what Mah-Jing is doing, but he calls this seashell coral shapes for his Mermaid in Space 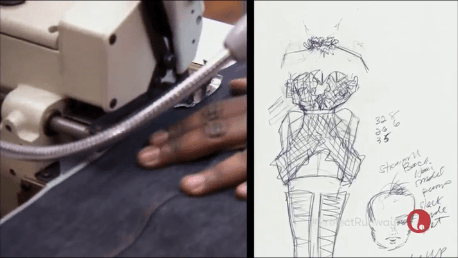 This is Erin's idea of design, she thinks unconventional materials are where innovation comes from. She also likes the texture of it all. Laurence respects Erin's work; that's her biggest competition. I'm worried about Rik, he's struggling and doesn't have much experience with avant garde.

Erin's settled on the idea of a paper-doll dress, you know, with the tabs? The problem is that it might be like her piglet / labia dress last week: not flattering. Mah-Jing warns her about her applique design, the glue might bubble up.

The next day, the glue has bubbled up

TimTique Time! He starts with Rik (good idea!), calling his safety pins tacked across the front "such a cheap shot" and all over: not refined enough. Cornelius bitches in the back that it's too simple for avant garde; settle down, Sugar! Worry about yourself

Roberi's robot dress doesn't fare much better, but Tim calms down when he realises Roberi is designing a helmet to go over top, not as part of the dress 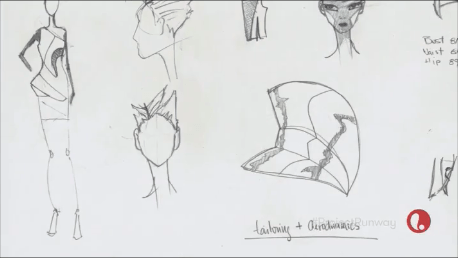 Tim likes Mah-Jing's look, but the coral metal netting is heavy, so Tim's worried about the model and strapless.

Laurence's stairway dress is instantly recognisable as her work, I like it but it has a lot of elements we've seen already. Tim worries that she's not pushing it far enough.

Tim reaaaly doesn't dig Cornelius' baby bump dress, it's more maternity than butterfly for sure. Tim calls it schizophrenic after and Cornelius decides to scrap the butterfly. Dangit! Now we get a "host being consumed by a parasite" ER

Mah-Jing is confused about Tim's "costumey" critique since we have a paper doll dress, RoboCop, bathroom tiles and a host being eaten by a parasite, so.

Everyone loves Erin's look and I JUST DON'T GET IT

One of the models speaks Spanish, drawing Roberi's ire: where was she when he was struggling with English the other day? 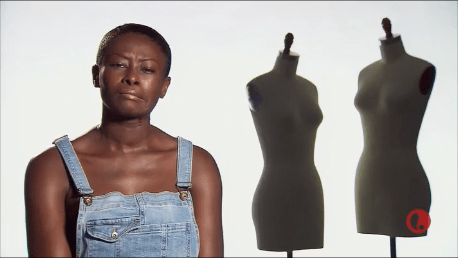 It's the last day of the challenge, time to get bizzay! Cornelius can't handle all the different ways the other designers handle stress: Rik and Roberi put their heads down, Erin twiddles (?) and Mah-Jing cries.

Rik does something unfortunate to his model

While Roberi tries to obliterate the human face of his look

Runway Time! We have our usual judges Heidi Klum, Nina Garcia and Zac Posen (I love Zac); guest judging this week Shiri Appleby from UnREAL! Woot! I need to get caught up on season 2. She looks very different, younger and with really big eyes and red lips. Huh

First up: Cornelius's mess that he will be explaining in 2.58 minutes 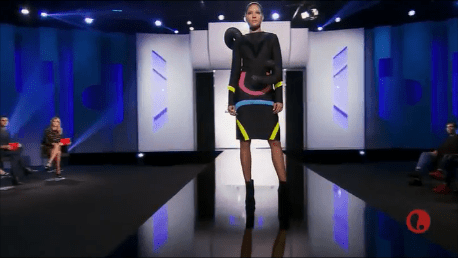 Mah-Jing's is nice, but it's no Space Mermaid, you know? Yay for staying up, though! 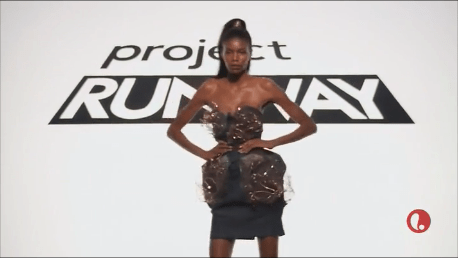 But I think Rik's looks too conventional. I don't get the styling either. I don't know where this girl is going 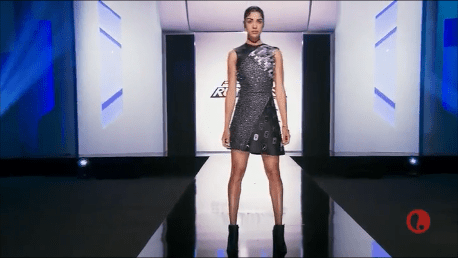 For a change, I hate Erin's and expect it to win. Just for something completely different. 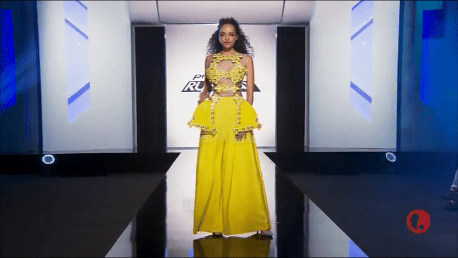 I think I saw Laurence's model's entire world view; that dress is hella short. The proportions are all off, it feels like the kind of dress you'd want to go really big with 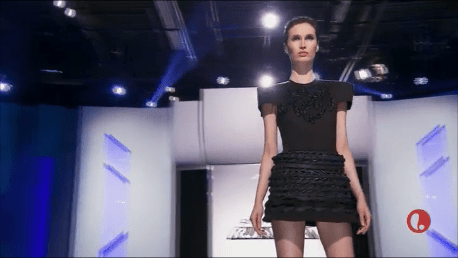 I LOVE Roberi's, wow, the face mask makes it. I was kinda meh about it in the workroom, but it looks great on the runway 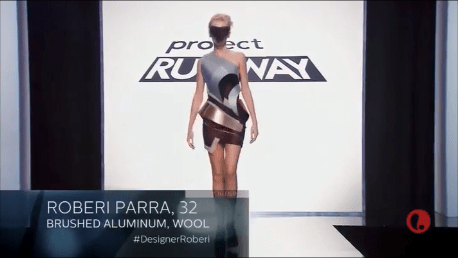 It looks like a real dress! I just don't know if it is too costumey

Roberi: Heidi loves his look, yay! AND the veil, like me! Zac feels like he represented an automotive car. Shiri speaks very slowly. Nina calls it slightly RoboCop, costumey, but I think he's in it for the top. Heidi LOVED it.

Mah-Jing: Shiri loves the copper colour, but didn't think it was bumped up enough. Not avant garde says Zac and I think Mah-Jing is going to cry again. Bottom

Rik: Zac loved his use of texture, it's a great mix of patterns and texture; he's really impressed. It made Nina want to find out about it and she likes the styling especially. Rik is a top.

Cornelius: his model looks like she wants to cry, but Nina calls it "disturbing" and "cliche". Bottom

Laurence: gets read for her inability to discuss her work; she explains that she thinks in French so Heidi tells her to go ahead! They'll read the subtitles later! Heidi likes the dress, but it could have been a different colour. Zac loves it but Shiri would have really liked a colour too. Nina reads her for staying safe. But I'm pretty sure it's a top

Model groping time! Nina REALLY hates Cornelius's uterus-tube. I hope Roberi wins! I love his dress but I'm pretty sure it's between Erin and Rik

The winner (should totally get a Lexus) is: Erin. Yay

She cackles alone in the back while Roberi, Rik and Laurence are excused, leaving Mah-Jing and Cornelius on the runway

Heidi gives him time to do a big speech, yay! Not like Dexter, who was still hearing the words when she kicked his bum off. Well. Mah-Jing DOESN'T cry and I feel cheated, there is NO PLEASING ME.

Until next time, you guys!