Hi guys! Welcome back to Project Runway and yet ANOTHER unconventional materials challenge! What's that, three now? And two back to back? How about some ACTUAL CLOTHES! Let's do THAT! Rolling An Unconventional Trip after the break

Last week we lost Mah-Jing to an avant garde unconventional materials challenge; he didn't even cry! He did so well this season, top six boo! Erin won.

There is only one more challenge before Fashion Week: who's going?? Challenge first, count heads later. Heidi is sending them on a little trip and listening to her try to affect a southern accent for her hometown (via Germany?) of Austin, Texas is hilarious. Almost as much as Rik's Foobie Pack. What?

Everyone's excited! I've been to Austin, it was plenty weird, just as they like it. Besides Austin City Limits and that a psycho lives there: I don't know much.

Roberi is 'CITED at the thought of getting to do something weird, go on with your asymmetrical self, Roberi!

The designtestants are staying at another Best Western Plus, not the hotel I stayed at with a giant cactus out front, kidney-shaped pool and roaches. Good choice. The BW+ looks cleeaaan. Come on down to the pool, y'all!

Guess who's there?? NO, GUESS!!!??? Okay it's Nick Verreos!!!! Season Two babies!! I love Nick!! He looks great, even more twinkly-eyed than normal.

He was on the judging panel when Rik applied 5 years ago and gave a Maybe.

He's doing the Best Western promo this year, go ahead, Nick, fish gotta eat. It's an unconventional challenge in the middle of Bob's Big Boy Boots, Cornelius is confused...They getta shop for materials at Georgetown Farm Supply and Stubbs BBQ...

Nick is SO EXCITED! The winner gets 50 free nights at Best Western properties; I still love AARP the mostest. See: free plug and everything.

I'm surprised that they have $500 to shop with, that seems like a lot to buy dried mealworms (herk) and horse harnesses (Laurence: put DOWN the leather!). Cornelius gets dog treats?

At Stubbs, Cornelius is letting his hair down, son! He can't be so uptight all the time! I don't think $500 worth of dog treats is particularly uptight.

Now it's time for some Stubbs' BBQ, then skinny dipping later. They try to talk Tim into it, but Grandpa takes a hard pass.

Some waffles later and it's back to New York!

Roberi likes to tie knots when he's feeling anxious: welcome to his Anxiety Dress! I quite like it, it looks real, if itchy. That's a lot of natural fibre rope.

Laurence is making a giant bird feeder, a regular dress covered in bird seed. Nothing like Erin's mealworms, I'm sure.

Cornelius is spray painting his dog treats, I don't know how that's gonna help. Erin is painting her mealworms too, luxury gold lame mealworms for all! They do look kinda cool, if they weren't spray painted larvae.

She's making an applique (SURPRISE) with the guitar picks, the flower design is interesting if samey. *coughonetrickponycough*

Thank goodness this is a two day challenge! Roberi won't get a THING done in one day.

TimTique Time! Oh but wait: there is a second dimension to this challenge. They have to create a second look. Roberi weeps.

It's a companion look to the unconventional materials challenge; with actual fabric! Yay! 30 Minutes and $200 at Mood later, we have some fast designs planned. 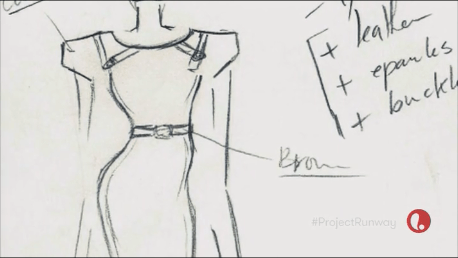 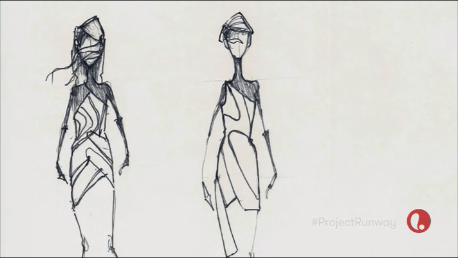 I couldn't do Rik's, he moved around too much. Cornelius's jumper 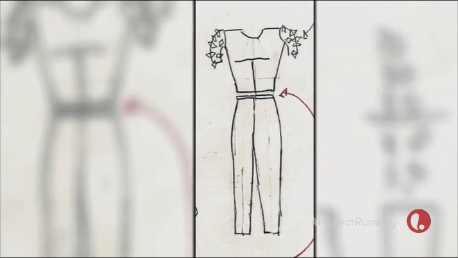 And Erin's making something mysterious with a weird print to go with her earthy smelling mealworms. Me and Tim

Tim likes Rik's okay, but the conventional dress is FAR too conventional. It needs to be ELEVATED, this is the last challenge!

Laurence gets soso feedback; work work! Roberi's dress is essentially a framework, it doesn't hide ANYTHING. It is an ambitious plan, Tim is "in a mad panic over this!"

Roberi is feeling anxious and misunderstood; Tim believes in your design! He just doesn't think you have time to do it all.

Everyone reworks and reworks and reworks, time to make it rework, Team! Time for Model Fittings, which is going pretty well. Even Roberi has something for each of his models to try on, yay! Go Roberi! His poor fingers are covered in tape.

Rik wants to bring his unconventional dress from "country bumpkin to slut" and wow I didn't like that. He roughs up his dress and surely there must have been another way to do that, right? Elevate instead of ripping it to pieces?

Everyone is so focused on Fashion Week; Erin is the only one who's pretty sure she's going. I'm not even mad, she's going for sure. Everyone else is a maybe (HOW is Cornelius still here? Oh, right, that gorgeous grey dress with the leather inset) but she already has a studio booked, you just know it. She's been a stand-out all season. I would say Laurence is almost a lock as well, if she can shed that one trick pony label.

Roberi had made a tube skirt hoo-ha cover for his model, the knots keep moving! I don't like either of Laurence's looks, at all. She doesn't like them either, but she's "trying to make the best out of my mess."

Hair and Makeup time! So much product placement, but the models look gorgeous and that's all that matters!

Hoo boy, Roberi's dress is barely there. Erin burns the same model Rik goosed last week, ease up on Britt you guys! Laurence shit-talks everyone's looks but Rik's: cute clothes but not fashion. Not in France.

I think Heidi is wearing Erin's print, no fairsies! Judges as usual: Zac Posen, Nina Garcia and Heidi, guesting tonight are Priyanka Chopra from Quantico (WHY IS THAT SHOW SO HYPED??) and Georgina Chapman, designer for Marquesa.

Laurence's do nothing for me, but I think the back of the conventional dress is better than the front

I really do like Roberi's Anxiety Dress and LOVE his conventional

The only thing I like on Cornelius's Cup CopOut dress is the sunflower seeds he borrowed from Rik but his jumpsuit is unexpectedly clean and crisp.

Laurence is first: Nina LOVES the birdseed dress. So do Georgina and Priyanka, who wants to wear the mustard dress. They like the back as I do, just a little boring. Heidi didn't love any of it.

Rik: his unconventional materials dress is called "epic" and "perfect" but the conventional look is boring.

Roberi: he does GREAT! Yay!! Heidi calls it macrame and brave and they all love it! Yay! Go Roberi. I know nothing about fashion and have no idea why I like his conventional dress so much, but I DO. It speaks to me. He's so relieved he could cry. And drink coffee

Erin: Zac loves it. They all love the jumpsuit, save Nina, who calls it boring and samey. Erin laughs, she don't curr. There is no way she isn't going to Fashion Week there, so you can see more there, BedHead Garcia.

Cornelius: Heidi likes both looks; Zac calls it "arts 'n' crafty" but we all love the romper.

Model groping time! I can't tell which way it's going to go; I think Cornelius and Rik are at risk. They both have one great dress and one soso look, who will be out?

So four are moving forward and one is staying home, who's in? Roberi!!!!! Who won the challenge, yay!!!! Now we're both crying! So happy for him! He's been planning his collection since Day 1.

Who else is going? Erin, of course, who hasn't planned anything but will turn out something totally dope She is so Emperor's New Clothes for me. Laurence is going as well, no surprise there. She's looking to boss Tim around in her space, hear hear!

So. We're down to Rik or Cornelius, who will it be? It could go either way, I love it when Cornelius goes formal, his tailoring is impeccable. Rik seems to create the same silhouette in the same fabric, but he's a more experienced and confident designer, so, I'd be good either way. Like it it's Rik, I mean.

And going to Fashion Week with Roberi, Erin and Laurence is: Rik. He never expected to get this far, his mind is blown.

I'm sorry, Cornelius, you did so well. Top 5! "Damn. Thatclose" He practically runs out, this is a man who keeps his emotions close to the chest.

See you guys next week for part one of the finale, who's excited?? I SAID: WHO'S EXCITED??!!! Me too!! I can't wait to see the different looks and watch Roberi snatch that crown and all the other designers, squee!! Until then!