Hi everyone! We left Project Runway at an emotional time last week, rife with happiness AND tension. Let's see what the remaining designers get up to this time!

It got HEATED last week on Project Runway; Cornelius was sent home after an ugly team challenge and Tim saved him! Tim used his Tim Gunn Save already! Good for him, I hope it's totes worth it, y'all.

It was a tough challenge all around, people actually liked ALL the clothes and asking designtestants who should go home is always a shite move. They have to pick someone, so it causes bad blood, but the judges don't take it into account anyway, so why stir the pot like that, boo? Dexter isn't worried anyhow

For a change, we have the challenge brought to the workroom, Tim brings in an AARP suit (??) to explain that they'll be helping a group re-imagine their next chapter in life: the designer's family! Woot!

We all cry and cry, these poor people aren't getting any sleep but I have no excuse for myself. I cried at Trolls the movie today! For reals! That "True Colours" by Cyndi Lauper is just a box of Kleenex

Erin makes it gross: she stayed inside her mom an extra month and pooped in her so awwwww. TMI

Roberi and Dexter have besties visiting them instead of family, Dexter's BFF looks just like Erin! Mah-Jing and his mom are TWINS, I thought she was actually him at first!

Tim is titillated about the next part of the challenge: the winning designer will get $25,000. Holy shite. Oh wait, the client will ALSO get $25,000, what???!! Go AARP! That's awesome! They get two days too, yay! This is a great challenge!

Holy cow, some of these family members. Mah-Jing's mom is an underground hip hop artist Bahamadia and she wants something origami-inspired 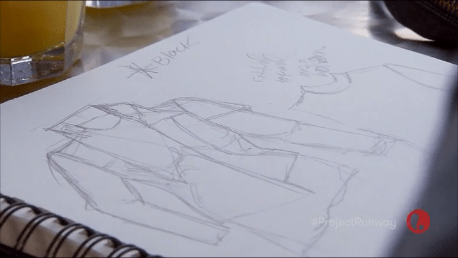 Laurence's daughter is doing something with bringing French culture to America but I love Rik's mom's story just a bit more. She's returning to school after 40 years away and he can't even get a single sentence out without crying and making us all cry and this recap is gonna be so soggy!

Cornelius's mom wants some leather in her look, go mama! Nathalia's mom wants a burgundy peacoat (?) that looks like this 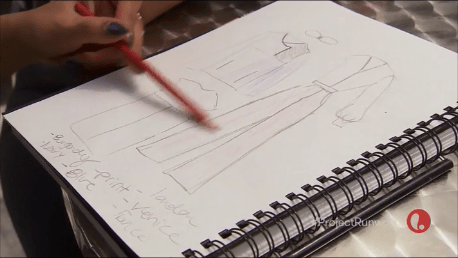 Erin wants to do something that makes her mom pop, but sounds like everything else she has done: a coat and I bet it will have applique. Her mom doesn't want a polygamist dress, fanks 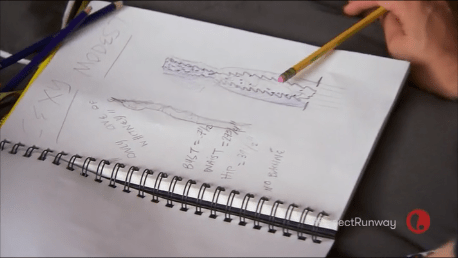 Jenni isn't getting ANY inspiration for an outfit

A client who doesn't know what they want is for sure gonna get what they DON'T want.

Mood Time!! They get $250 and a loved one's inspiration so I am burning some sage and ohming that no designer falls in love with a weird print on a fabric that supersedes anything their client actually likes. Ohm ohm ohm

Ohhhh, Mah-Jing's using leather, I hope his table is close to Laurence's. Jenni's designing as she goes, eeeh 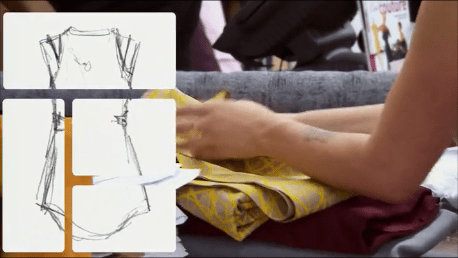 Thank you, Mood! It's neat back in the workroom, they have adjustable mannequins! That's kind of cool! Rik's using kangaroo (like real kangaroo skin, like from Australia? Really??) for his mom's look, which makes Nathalia cry. And compare Cornelius to Jesus. Er

Day two! The problem with a two-day challenge is that the judges expect a LOT. Model fitting time! Wow, I saw Laurence's daughter's boobs and now I feel funny. She's totally an adult, but still. Weird.

Ohhh nooooo I saw Roberi's dress and he's making Suki look like she's going to prom. In 1987. Mah-Jing's mom looks MAD and also scared / angry a bit, like she wants to smack someone and doesn't trust herself to make eye contact. Odd

TimTique Time! Cornelius is up first and Tim wants to talk about saving him last week. He totally didn't agree with the judges and he's STILL mad bout it. He is happy with Cornelius's design and so is C's mama, so on to Mah-Jing.

Tim calls MJ's design ambitious and then on to Jenni. Her sporty look confuses Tim. Her mom isn't helping either. Laurence's daughter's boobs are out again, but Tim doesn't even NOTICE! He wants to talk about Laurence making ANOTHER samey but hot leather jacket, but Laurence thinks he just needs a little faith.

Ohhhh, maybe the dark blue prom dress was actually Rik's, because Roberi's look is kinda cute. Tim is quite concerned about Nathalia's leather and wool coat (waitaminute: I thought she was ANTI-leather? I assume it was from a sustainable source), it will have to be cut perfectly. 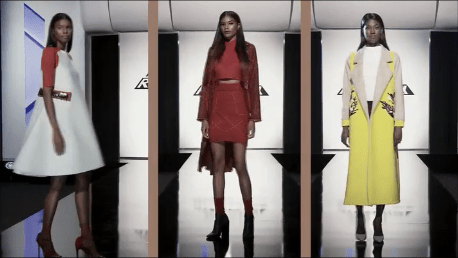 Nathalia has yet to actually show us even one trick yet, so I'd suggest she focus on that. Tim feels slightly less positive about it than Erin's mom

When she says it's a little different. She sticks to her guns, she thinks having a signature look is a good thing. I personally think she'd make a heck of a coat designer, you know, if you just wanted the one look, but the judges might want to see a little more DESIGN in their DESIGN COMPETITION.

Dexter is making a weird wool dress with oddly placed lumps: it looks like one of those maps of the uterus, but in relief. And a really ugly colour. Tim says Dexter and his bestie are the coolest people in the room: is this woven mess cool? He needs to Dexter-ize it.

Rik's mom loves his look and Tim isn't about to rain on her parade. He's excited! TimTiques out!

Jenni isn't changing anything, she's just focusing on fit now, so thanks for nothing, Tim! Rik's sewing a giant heart on his mom's dress, um. Plus white stitching plus leather, I mean.

Erin's mom also wanted to be a fashion designer, she made lots of clothes for Erin when she was younger and was another one of those women who got caught by starting a family super early. She gave up all her opportunities and now it's Erin's chance: I feel as though those women are the lost generation. And maybe the one before that. They stayed home to raise a family, or took shite jobs to pay the bills and never accomplished what they would have wanted to. I partially blame society for not having decent childcare readily available universally and partially blame anyone who thinks that raising children is a woman's only joy and goal. There are a lot of fabulous things about being able to raise your children the way you want, but if it means you never accomplish anything creatively or intellectually that makes you feel as though you exist: it can feel as though you've lost something.

Nathalia's leaving the second night with not much done but Mah-Jing's in a good place.

Runway Day! I quite like Nathalia's jacket, but she's worried. It looks oversized and awkward. Laurence isn't focused on the money so much; she wants to help her daughter feel strong.

Seriously, AARP, best challenge this season, I love your work! Plus technically I've been an 80 year old woman my whole life.

Jenni's pants are AWFUL. Cornelius's mom has no time for his shite.

Mah-Jing thinks this has been a really dope experience for him and his mom and I am so worried about him right now because of that...

Hair and Makeup Time! Not much to report but lots of product plugs. I like how Laurence's daughter looks, tres moderne indeed.

There's a whole lot of last minute work to be done, which always happens no matter how much time the designers get. Everyone's side-eying Erin's lace dress, I think it's a lovely lace but everyone thinks it looks too lazy.

Erin didn't finish hemming her jacket, it's not good. It's hanging all funny and I hope she sorts something.

Runway Time! There are two guest judges today, Olivia Culpo (she was Miss Universe or something but I'm too lazy to look it up) and Katia Beauchamp from Birchbox (I dunno) and an investor on Project Startup.

Roberi's dress is up first on Suki: 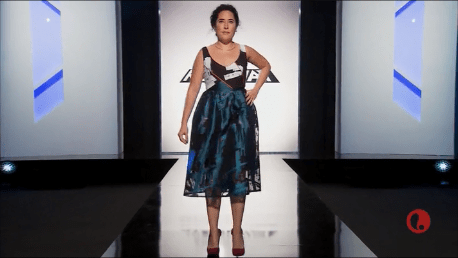 Oh Jenni. She calls this a beautiful moment for the two of them. 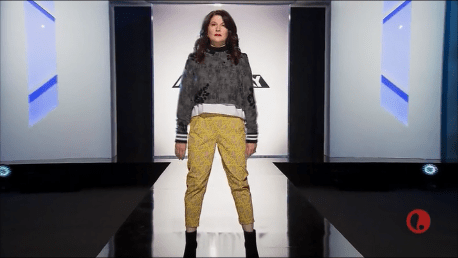 Dexter's BFF Lauren LOOKS like a model and I think I kind of like his now. Sorta 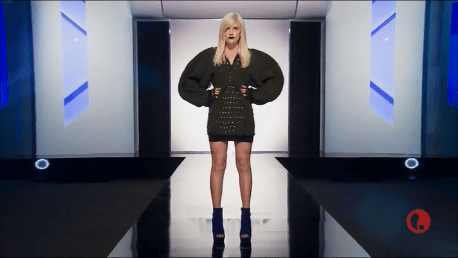 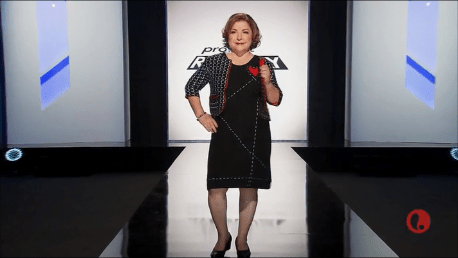 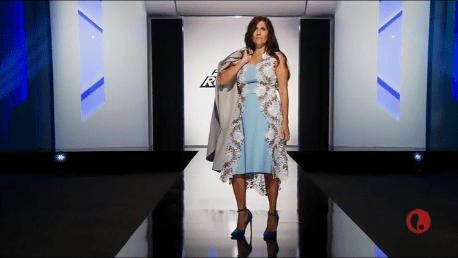 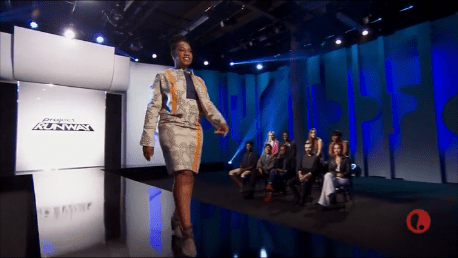 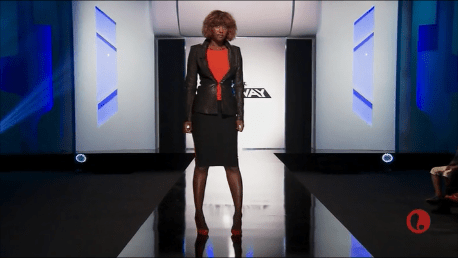 See what I'm saying about Mah-Jing's mom? No way anyone didn't know whose relative she was 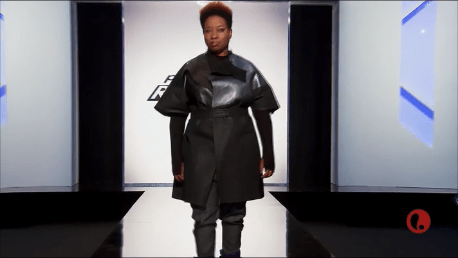 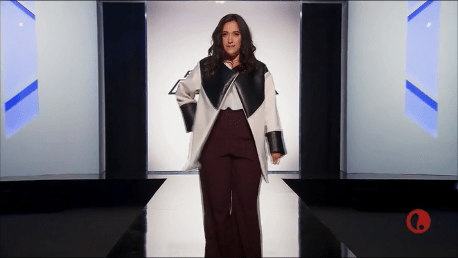 And Heidi, who's been beaming at every single model today, does this:

And that's it! Runway over and Cornelius, Dexter and Laurence have made it to the next round. Let's find out our tops and bottoms.

Erin: Nina questions how many messages were mixed with the minimalist coat and the summery lace dress. They all pan it, but Whitney likes her blanket coat and summer dress. Bottom

Rik: Nina loves how dignified it is, perfectly fitted and Zac digs the modernization that Rik added. I so hope he wins. Heidi says it looks like a real designer's dress (Rik's mom cuts in: it is) and expensive too. Top

Jenni: Heidi calls it sloppy and one of the worst looks of the day. Amanda LOVES it, so. Zac feels like she's more powerful than that, you know? The pants are awful. Bottom

Mah-Jing: the judges LOVE how powerful she looked on the runway. Mah-Jing cries as they talk about what a great job he did on this challenge. Top!

Nathalia: Nina thinks the IDEA of the coat was good, just the execution...it's too big. Zac points out the hem and Olivia craps all over the silhouette. Katia rips her a new one over her lack of time management, I'd say it's between her and Jenni to go home. She cries. Bottom

Model groping time! Poor Nathalia's mom, they hate that look, but not as much as they hate Jenni's look. Erin's mom mostly gets a pass, Erin isn't going home today. I thought it was weird when Heidi told Erin's mom that the dress doesn't look like "her" when I'm pretty sure ERIN would know that better than Heidi. Just say you don't like it!

It's between Rik and Mah-Jing to win it, I can't tell yet which way it will go. I just hope everyone gets to take their outfits home!

And going home tonight is: Jenni. Wow, that was a really bad look, hey? I didn't get it at ALL