Hi everyone, welcome to my first recap of Russian Doll! It's thanks to an awesome Patron through Patreon that I'm starting this show, you are also welcome to suggest shows, I dig that! Let's see what Natasha Lyonne has been up to since AlphabetJail!

We open with Nadia Vulvokov (Natasha Lyonne) looking sexy and into a mirror in a fancy black bathroom. Beats thrum through the walls as someone pounds on the door and Nadia girds her loins for the night ahead.

I can't figure out where they are; it looks like someone's huge house or a library but that bathroom was pure club (LIKE I WOULD KNOW) with its fancy black tile and rounded door. Will pay close attention!

Nadia struts through the space cupping elbows and lighting cigarettes from an lighter on a lanyard (is she gay? Because that was alllll swag) until she reaches the kitchen where Maxine (Greta Lee) waits with a cocaine-laced joint (like the Israelis do it!).

Nadia is wrestling with her age, 36 is a pivotal year. (I don't remember 36, I was pregnant and chasing after a one-year-old) Maxine tells her to have fun, damnit, she's making her a birthday chicken! Birthday.chicken.

Lizzy (Rebecca Henderson - a fellow Canuck! We all have overalls) approacheth, she made that rounded bathroom door. She's also f***ing a 22 year old woman, this proffered in response to Nadia asking if women can have mid-life crises.

Nadia's cat Oatmeal has been gone for 3 days. 3! Even for a deli cat (is that a thing?), that's a long time to survive in New York City outside. Essentially, Nadia is pondering the nature of her existence, what's she dooooooing with her life?

We meet Mike Kershaw (Jeremy Bobb!!!!!! From The Knick! He has an American accent, just like when he was on Billions in S1:E03 Yum Time. Huh) next proselytizing about the American political system, wheeeeee. I think they're flirting in the most cynical way possible without any actual interest. He stares at his phone, saying he's separated with a boychild while she tells the story of the building; it used to be a School for Jews.

That gets his attention and he finally looks up to get this thirdrate romance party started. Literally three seconds after they're in proximity,  his fingers are inside her and they're discussing 90s hiphop. THEN the kissing.

They leave the party, Nadia's attention is drawn by a man across the street. He looks sort of homeless? Mismatched clothes and unruly hair and no shoes. Nadia and Mike forage for provisions, Nadia listening to a dude try to convince his reticent friend to take a shot at a ladyfriend.

The bodega cashier isn't behind the till to start, Farran (Ritesh Rajan - he's been in everything and looks familiar but I cannot place) but comes in with a nervy friend who's having a rough night. We kind of meet the two dweebs stocking up on whipped cream (poppers?) and one other yutz, but no names yet.

More chattiness back at Nadia's pad, she and Mike banter about whether she's a sad cat lady and whether the gender of the cat matters or not. Some more "flirting", she calls him an Uber and she's all alone on her 36th birthday.

She works on video game software until she runs out of smokes, heading out she sees Oatmeal chilling by a gate. She starts towards him and is hit by a taxi. She lies in the street, dying, until suddenly, we're back in the bathroom with someone pounding on the trippy door. 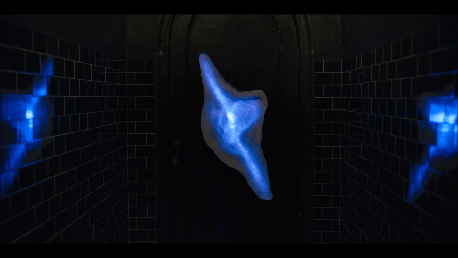 She heads back out to the party to relive the exact same thing. Except she's changed, she's freaked out and it's not the Israeli joint.

Cute banter with Lizzy and Max then we're onto Mike, whom Nadia did not actually know when she unzipped her pants to allow him access during their TLC review.

I thought it was maybe some kind of role play that couples do when bored and have watched a lot of Netflix (Black Mirror S5:E01 Striking Vipers, Russian Doll). That's not judgement!

New person! It's Ruth Brenner (Elizabeth Ashley who has been in everything but I love her for her Murder, She Wrote work) and we're talking to her instead of screwing Mike.

If I had to be stuck in one Groundhog Day-type scenario for the rest of my life, I think it would be awesome if it was at a huge party that I could just randomly spend one entire night talking/etc with one person at a time. You're next, Overalls!

What if life is just a series of scenarios and we don't even KNOW when it's new?? WHAT IF?

Ruth and Nadia talk about Nadia's mom, hmm, who did not live to the age of 36. Interesting. "Nothing in this world is easy, except peeing in the shower."

Maxine brings out a projector full of experiences, it's a light show reminding Nadia of being murdered by a cab. She runs into the bathroom where Overalls is making out with a young woman we don't meet just yet.

Nadia's ex John (Yul Vazquez - ahhh this guy is awesome! How come I don't know his name? He and his cheekbones have been in EVERYTHING) walks in next because apparently this bathroom is not just for peeing and illicit humping.

Nadia tells John she thinks she maybe got hit by a car and is dead, his suggesting that she might have some marks if that were the case makes me laugh. Let's talk metaphors!

Then it gets real for a minute; there's a child and some guilt and divorce/breakups are gross.

He strokes her hair while she talks about Oatmeal being missing, he's going to help her look! They go outside to see the same homeless fella and Oatmeal. She walks into the street again, only avoiding being hit by a cab because John pulls her out of the way.

They fight. She walks home alone to find Oatmeal in a park? Cemetery? She takes him for a cuddle to the bridge where he disappears out of her hands and she falls off the bridge, to wake up in the bathroom with her mouth full of water.

Nadia freaks out all over Maxine, who suggests haughtily that she should maybe leave if she's gonna act like this then screams after her to not bail on her own birthday party.

Nadia almost takes out Mike and herself on the stairs, what's interesting is that he said he was separated from his wife earlier but he's leaving a voicemail message full of lies for someone just when Nadia knocks into him.

There's a real sexiness to the New Yawkness of the show, both Natasha Lyonne and Jeremy Bobb exude it in waves. The writing is superb, if a bit wordy (SAYS TalksTooMuch HAHAHAHA) and what a fun show! I can't believe I didn't check this out earlier, thanks for the suggestion, J! Cheers.