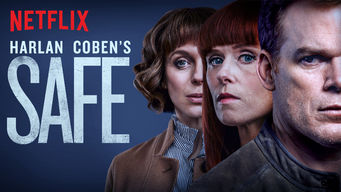 Hi everyone and welcome to Safe by Harlan Coben produced by a favourite of mine: Nicola Shindler and Red Production Company of Happy Valley fame. That combination brought us The Five in 2016 and it stars Michael C. Hall from Six Feet Under and Amanda Abbington from Sherlock and Cuffs, how could it possibly miss? It can't. Let's watch!

We open at a funeral with Tom Delaney (Michael C. Hall who, okay, has been in more than Six Feet Under) crying with two teenaged girls, one who refuses his hand with a "yeah right" even and then we're into bluesy credits and we move to One Year Later and Day One.

Tom is a surgeon...sorry, English surgeon and I legit spend a full 30 seconds trying to figure out what he was doing with his face. Is that the accent that makes him screw up his entire eye area? Is he supposed to be English or Scottish? This is gonna be a poser.

Then we're at a barbeque with Sophie Mason (Amanda Abbington!!) and her son Henry (Louis Greatorex! From Last Tango in Halifax!!) and a funny fella whose name I haven't quite caught yet. The angry daughter from the funeral is Jenny Delaney (Amy James-Kelly), who is now texting "Tonight - Heaven" to a handsome young Chris Cahal (Jeremy Thorp). Chris is only half paying attention as he's being berated by his dad Neil (Joplin Sibtain) about staring at his phone. His mom Zoe (Audrey Fleurot) tells Neil off in French and it's so dysfunctional-family it squeaks.

Neil and Zoe are about to divorce, that explains a bit of the rancor.

Jenny stares hard at Sophie, what's that about? Ahhh, that's because her dad is currently shagging the lovely Sophie, under the radar (in theory), sneaking off during the picnic. We're all wondering if this started before the death of Tom's wife, but then who are we to judge? We're not flying spaghetti monsters, not one of us!

Let's meet the Marshalls! Jojo (Tony Lindsay from Unforgotten series 2!) is married to the beautiful Lauren (Laila Rouass), daughter Sia (Amy Leigh-Hickman) rounds out the trio. The folks are heading out, use the alarm and absolutely no parties!

Jenny moodily sets things on fire while waiting for her dad to get back (Sophie wiping her mouth off was a little much) then pouts away now that they can see her. Funny fella from before is Pete Mayfield (Marc Warren) but he doesn't look very funny watching her walk away. Hm. Pete asks after Jenny and Tom admits that he's hacked her phone, but hasn't looked at the messages yet. Tom's wife who died made him promise he would do anything to keep their daughters Safe. Peter advises Tom to never ever do that, which means I will now assume he's up to no good with his friend and co-workers's daughter.

Why is Tom continually pursing his lips to speak like that? Does the English accent hurt his mouth? Is his bee-yah very lemony?

Chris heads out with three friends and half a bottle of rum, that's going to last about halfway to Heaven. Jenny makes her excuses and heads over to Sia's house for the house party she's totally not allowed to have. Chris and Henry are there, along with a dishy young fella with an interesting mouth.

Chris is far too drunk to be present for whatever Jenny had planned for "tonight of all nights" which would be?

Sophie smokes and drinks wine alone in the night, why doesn't she go see Tom? He's not doing anything but pursing his lips and dreaming about his dead wife Rachel. He wakes up to see that Jenny isn't home yet and decides to hack into her messages while we get edited flashes of someone messing about in a swimming pool. Sophie checks to make sure Henry is home then goes off to bed herself.

It's the next morning and a frantic Tom wakes up other daughter Carrie (Isabelle Allen) and they head to the Chahal abode where Chris hasn't shown up either. Chris was going to stay with someone named Ioan (Hero Fiennes Tiffin - that's a NAME!!) and maybe I'm wrong about Henry being home because Sophie is also looking for someone.

Ioan is the young man with the interesting mouth, his mum Sarah (Zoe Dickens) is overprotective but neither one of them know why Chris would say he was staying over at their house. Okay, Ioan knows, he owed Chris money so Chris asked him to lie about him and Jenny. Huh.

My bad, Henry IS home, Sophie performs a perp walk on him to get him into the car (nice head duck!), it's her ex-husband Josh (Emmett J Scanlan) who was out drinking the night before too and wasn't in his caravan in the driveway. He's back now, yaaay, jobs are so much more boring than just drinking every night on the town. Really that means he was out last night too, noted, fanks.

Tom got the tip to check for Jenny with Sia, who's got the whole house cleaned up already and whose parents are creepily flirty with Tom. I call swingers!

Sia disavows all knowledge, but stares after Tom looking petrified while we cut to the pool a couple of times in case we weren't sure what we should be worried about.

Ah, Sophie did a great perp walk because she is indeed a copper! She gets in to roast the detective on duty gently and in walks Emma Castle (Hannah Arterton from The Five), new detective from the big city. They're off to investigate something at a girl's school.

Emma blames her transfer to the small town on a breakup, but there's an odd moment where she stops and stares at a memorial to 4 young children killed in a fire.

Now we're off to see headmaster Tim Kenmore (Stephen Henry) who has a story about sexual relations between a student and teacher. Er, those kids look pretty young, that's not what I would call it. Ohhh, the teacher is Zoe Chahal and this isn't the first set of allegations against her. Dang. Tom calls but Sophie declines so Tom is off to surgery where his mind is obviously not on the job. He finally calls the police.

Zoe finally shows up to the school and the detectives open her locker for a search. Zoe disavows all knowledge of a flash drive so we know that's where the good stuff is. The drive is full of nude pictures of Zoe and intimate letters written to her, are they from a student? Emma is taking Zoe downtown to discuss.

Coppers have shown up to ask Tom about Jenny, they're managing his expectations with statistics about teenagers from gated communities. Tom's not having that, he lost his wife who had a 60% chance of living with her diagnosis.

Tom's out and driving when he spots Ioan again, who runs instead of talking which has to set off ALL the alarm bells. Tom literally runs him down then takes him to a pub for a pint. Ioan spills the beans about the party and Jenny and Chris fighting.

Sophie smirks as Emma runs the prints on the flash drive, Emma confronts her after. Why wasn't Sophie saying anything? Is this a small town thing? No, Sophie carefully explains, the case is bollocks (anonymous tip, genuine surprise on Zoe's face, generically intimate letters) and that's a "good cop thing." Young Emma bought it hook, line and sinker.

Sophie sets her junior Darren (Raj Paul) after Tom's case and they contemplate the unusual coincidence of both of their current cases involving Cahals.

Tom's gone right back to Marshalls to find out what really happened now that he knows there was a party, Ioan mentioned that Sia cancelled the party quite a bit earlier than expected but she's still lying to Tom and her parents.

Now this is odd, we've got Emma taking photographs of Peter, why? Is he her ex? Is this some big city case? Speaking of strange, we've got young Henry hiding stuff in his closet, that must be evidence.

Whatever Emma is looking for with Peter, it's not recent because she's got loads of surveillance pics of him.

We get a walking tour of all of our suspects, including Jojo Marshall, who was supposed to have been away, is that why Sia had to throw everyone out all of a sudden? Parents were on their way back early? Or was it because she found Jenny being attacked in the pool?

We've been getting bits and pieces of why Jenny was angry at her dad at the funeral, he was at the office or downtown at least when Rachel was home dying.

Jojo digs something out of his garage while Ioan calls Tom for a meet, there's something else he needs to see. Ioan's found a Facebook video showing Jenny getting into a car with...Peter? And Jojo's got a dead man in his garage freezer, I can't tell if that's Chris but we'd have to assume, wouldn't we?

Huh. Well, that went fast, didn't it? I am digging seeing some of my favourites in this series, Amanda Abbington, COURSE, and Tony Lindsay but Michael C. Hall's accent is making my ears bleed. Good thing he's an amazing actor anyway.

Now. To the story. I sense the fact that this is a capital G-gated community is a factor, does that mean these young people are supposed to be exponentially safer? How about the doctor's wife dying? How about the Marshall family, the matriarch flirting with Tom even as we know they knew about Chris being a personsicle in the garage freezer? Hm? How do the accusations against Zoe tie in? Is that associated with her divorce? Speaking of that, were Sophie and Tom involved while his wife was dying? Sorry, sorry, I got sidetracked, what I meant to say was: Who Killed Chris?