It's 1977 and Candy (Maggie Gyllenhaal) didn't come to play: she came to slay.

Everyone knows her, but she doesn't stop, striding into a hidden discotheque guarded by Big Mike (Mustafa Shakir). Inside is Officer Haddix (Ralph Macchio who will always make me gasp, it's my teenaged self's fault) waxing poetic about someone licking his wobblies? Or he wanted someone to lick his wobblies? Either way, welcome to The Deuce and Club 366!

Candy spies film partner Lori (Emily Meade) and pimp C.C (Gary Carr - he does menace better than anyone else on this show and that's saying something), a quick cheek-kiss and Candy is gone again, dancing by herself in the crowd.

Oh. Yay. Frankie Martino (James Franco) is there but leaving, let me explain.

Frankie and Vincent Martino are twins, both played by James Franco's grin. Annoying af and adds zip zilch to the plot or style. It makes Parent Trap look professional.

Oh here's Vincent now, with longer hair than his "twin" Frankie. That's how we can tell the difference!

*You KNOW there's a massive budget in use in The Deuce, why this cheesy shite? Okay okay, we're five minutes in, I'll stand down. FOR NOW.

Yay Candy is directing adult movies now too, along with the acting! And Vincent's club is huge, very swank and exclusive. Look at them indeed.

Frankie heads over to the brothel to see Irene (Roberta Colindrez), he chitchats with the attendant before heading to the office to steal whatever he can. He lost a bet. Frankie is the brother who always loses bets, Vincent is the one who pays the vig.

Lovely but still super high Shay (Kim Director) busts him for $20 while showing us 2/3 of her boobs, I'm surprised to see her still alive.

Frankie tries to convince his girlfriend Abby Parker (Margarita Levieva) to give up helping people with labour issues for a roll in the sheets, but a call from Irene distracts.

C.C. is still very much in control.

*I am listening closely because I have never, ever understood why they show trains going into tunnels or fountains exploding.

Harvey is so skinny! I am not concern-trolling but actually concerned, he looks like a bobble head. This was him last year:

Vincent checks in with Irene; Frankie made off with just over 10 large.

Things are different over at Larry Brown's (Gbenga Akinnagbe) pimp-pad. He still has his team anchor Darlene (Dominique Fishback) but she's reading bigger and bigger books and he doesn't like it. His two new girls are equal parts disinterested and overtly sexual. The super young one worries me.

Candy works late into the night, editing the movie with her artistic cuts.

Vincent is still looking for his brother, one of the brothels is next on the list.

Hey brother-in-law Bobby (Chris Bauer) is still running the brothel and sampling the wares, probably not even paying. That's gotta be weird when you are running the business and enabling the guy who's screwing around on your sister.

Hmm, looks like our patrolman Chris Alston (Lawrence Gilliard Jr.) is a detective now, sorry about your luck Officer Flanagan (Don Harvey), still a beat cop after all these years and in the throes of a nasty divorce.

Across the diner, Rodney (Method Man, who surprised the hell out of me the first season with a memorable scene) is motivating Shay and his other girl, maybe if she cleaned herself up right, she could get back on the streets, actually humping for money instead of the peepshow stuff.

Rodney overhears Chris's radio going off so he bails after we get an update on Leon (Anwan Glover) who shot Reggie Love to death last season. He's almost done serving his sentence, he'll be back soon! Rodney doesn't think that says much about the criminal justice system.

*The creator of this show, David Simon, once suggested Ghettoside by Jill Leovy as reading material and it could not make more sense here. It's about the under-prosecution and yet over-prosecution of minorities in their own neighbourhoods.

Chris caught a murder case, 48-year-old Wal-Mart manager Stanley Pearson was stabbed in a shitty part of The Deuce while his wife was waiting in the Sheridan to go see a Beatles revue. Chris is interrupted by Gene Goldman (Luke Kirby) who's with yet another clean-up squad. Midtown Enforcement Project's raison d'être is to make New York City seem safe for tourists. Chris blows him off and we're off to see the poor dead guy.

Abby's meeting is with self-proclaimed "feminist dancer" (Annabelle Dexter-Jones) who got fired trying to unionize the strip club she worked at. Abby offers her a shift at the Hi-Hat, which she's now managing since Vincent moved over to Club 366. That's the fancy disco we saw in the first act!

Abby got the women out of leotards once she took power, wooooo. Katrina just wants to know: clothes on or off? On.

He holds up the director for $200 and then tells Lori it was just a play for more money. She hates the lack of professionalism when there are literally one thousand other things she could be mad about. She apologizes to the director.

Chris goes back to the area where Stanley Pearson was murdered, there are a lot of used condoms on the ground next to the Chester Motel. He checks with the night clerk, who maybe recognises Stanley because he had an argument with a kid in this hourly rental motel for hustlers.

Vincent stops by the diner, where Frankie was spotted with a blonde woman from hoochie films. Not that Leon's nephew Chauncy (Daniel J. Watts) watches those.

Darlene visits with Abby at the Hi-Hat, she got her GED! Wooo. Next up is a night class!

Vincent's hitting every sleazy joint in New York, next stop is where Candy is shooting films. She knows exactly who Frankie was with, Christina Fuego (Katrina Cunningham) has been missing for days.

Awwww, Officer Haddix is reading Screw Magazine back when it was Screw Newspaper! It looks too NEW. He and the other cops are discussing whether the newly elected Mayor Ed Koch is gay or not when Chris walks in: consensus is hell yeah.

Chris would like Haddix's help with tracing the hustler Stanley fought with, Haddix is now the senior detective in Vice and really?

Vincent continues to walk the streets, ending up at former protege Paul's bar. Paul got to open up the gay bar he always wanted to! With a backroom full of dudes humping each other, mazel tov!

Paul has a very bad mustache, we're going to need to brace ourselves for the advent of the 80's pornstaches. 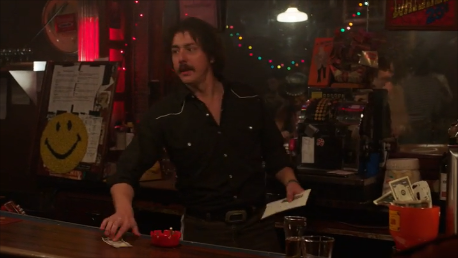 Candy is still acting in the movies too, who would have thought that the "most boring part of this whole thing is the f***ing?" I imagine that's what all actors think after a certain amount of time in front of the cameras. She's got all kinds of plot ideas and segues and plans in mind and an adorable lingerie set but no nudity! Woooo!

Vincent's back at the Hi-Hat, complaining about Frankie AGAIN, maybe this time he'll leave Frankie to swing on his own rope.

A punk band plays, Abby's much younger than Vincent, hey? Super obvious now when she's bopping away and he's complaining about the noise.

Tommy Longo (Daniel Sauli) knows exactly why the take is short this week, he'll explain it to Irene, who looks terrified.

When did Paul get wifed up? His boyfriend doesn't want them to be the only owners of Paul's future dream bar but Paul wants all the control, creative and otherwise.

C.C. does not like how Lori keeps loudly contradicting his orders. She doesn't like how he made it really obvious that she was a whore today on set and now thanks to him, she's a whore without a john.

Abby pops 'round, oh hey, here's Frankie and Christina. James Franco does look a fucktonne better without the dry wig and ganky mustache.

Chris picks up Leticia (Kelechi Ezie) after her shift as a nurse, she isn't our intrepid reporter from last season but they seem happy.

Frankie and Christina got married! Yaaaay! More twin scenes. He spent all the money he stole from the mob on a ring for Christina. He loves her! She's his "womb cocoon!" Or "wounded tomb." It was hard to hear, there was lots of bad seventies music playing.

Vincent forgives Frankie's debt, as we knew he would, Abby loves him for it because everyone loves a sucker.

Rudy Piplio (Michael Rispoli) and Tommy have an idea why the take's been light, they're gonna show Vincent. One of the other guys on the block has peepshow booths like they do, but there isn't any plexiglass between the customer and the dancers. Buck a feel, boys!

Candy gets back to the editing room as Vincent gets to his place with Abby: they've both strayed over the years but as long as they don't lie to each other. That's a beautiful thing. I don't need to see them hump, okay? Candy's watching a couple do just that on screen, she's cut it so much more of the women's sensation is shown. She lights up a smoke as Vincent does, pulling his off the nightstand where a "Sisterhood Is Powerful" book resides. And we're out.

The music has always been excellent on this show, I've got to give them that. The difference between a show filmed in the 70s/80s and one done later is always huge.

As for characters, I get that they wanted to continue the stories of who we've met, but that doesn't really work for the subject matter. Sex work is notorious for its short lifespan, as is hardcore drug addiction personified by Shay. I canea take any of that Vincent/Frankie shite, it makes me feral. C.C. was developed so well last season as a very dangerous someone, now, he's been tempered and altered and it doesn't feel as authentic. Not that people don't grow and change, but rather he's become more entertaining and less terrifying, if that makes sense.

The lighting is awful, I get that these are not shot during broad daylight but if I can't SEE the actors, I can't care, y'all. Get a meter in there. *Like I know what I'm talking about*

One of the things I was unsure of in season one of The Deuce was if they ever transcended exploitation, if they shone a light on the dark things or if they profited from same. I still don't know. Until next time!