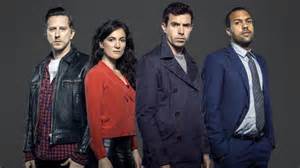 So. We know who Jesse is on The Five, we've got a good idea of who took him and why, now we need to know about all the murdery bits. Onward!

Last episode, all is becoming clear: Karl is Jesse (which I'd kiiiinda guessed earlier on, hedging my bets between him and Ken, although to be honest, more Ken), his dad is / was Frank, who is dying in hospice and that's how Jesse's blood ended up at Selena Callway's crime scene. Let's find out if he had anything to do with Jay Newman's autopsy or what have you! Maybe CPR? And in a somewhat unrelated storyline, Ray tried to burn down Danny's house and Danny found his inner non-dadness. Right, ready?

One more thing; we found out that Frank was Jesse / Karl's father through DNA testing when Alan was arrested; Alan was arrested because Marosi said Jesse was picked up "by his father", which at that time: everyone thought meant Alan. So. Did Marosi know that Frank was Jesse's biological dad, or was he simply stirring up shite as he is wont to do. Every single TV show and book says prison is boring AF, so perhaps one must amuse himself however possible.

We're at Mark meeting Frank again, then to Frank explains everything in a series of flashbacks, starting with his coming by Mark's house when he was little. Mark used to ride with Frank's young daughters but that day he was sick. The kids are being kids, fighting and singing loudly and generally being obnoxious (I'm probably the only person alive who finds that calming - it's not just my hooligans that make parents want to stab themselves in the eardrums! Yay!), distracting Frank and then we see the car crash, a large truck running a red light directly t-boning Frank's car. Oh wow, that was the same day? So had Mark not been ill, he would have been killed in the back of that car as well?

Frank's wife never forgave him for the death of their children, and their marriage didn't survive. Julie was kind, comforting with words and then eventually her privates. A need to console after a terrible loss, I get it. It was just the one time, she cared about him but loved Alan. 9 months later was Jesse!

Frank asked Julie if he was Jesse's father, but Julie denied it. He watched Jesse, though, and he began to see, to recognise things that made him think Jesse WAS his child after all. Then was that fateful day in the park, with Mark and his friends so cruelly shunning Jesse, then Slade chasing after Jesse, then running away from an angry Danny and here I have to call MAJOR SHENANIGANS.

Ray was just then yelling after Danny, who had his baseball bat and was angrily smashing things, moving in the direction of a scared Jesse. That we know. How come nobody, like the TRAINED POLICE DETECTIVE or his wife noticed the grown man across the street following after Danny shouting "JESSE!" I mean. They KNEW Frank! Their son was on the way to cry at his daughter's graves!

Jesse made it clear while Danny went to cry at Frank's daughter's graves; he was in a clearing in the woods when a younger Jakob Marosi popped out from behind a tree looking terrifying. Jakob went with the I've Lost My Oddly-Named Dog (golden Labrador retriever named Blackie? Ironically, course) approach to lure Jesse, going in for the snatch just as Frank showed up, identifying himself as Jesse's father. Aww I love that we got to hear Jesse say somefing, it's been all tears and horrified faces to this point.

Frank took Jesse home with him, telling him that his mum had just called, Jesse will be staying the night, yay! And the it's lads together the next day to the seaside, where Frank shared some home truths. He's Jesse's dad, and he took Jesse out to that farmhouse in the middle of nowhere and raised him. Frank maintained appearances for a couple of years, then sold his house back there and moved on.

Frank became Ron, Jesse became Karl and got excellent grades in chemistry. True to what we knew of him later, his bloody plaster (is that like a Bandaid in the UK? I assume) ended up at Selena Callaway's crime scene while trying to impress a girl and JokeyCurly Ken was involved.

So, Mark, it must be better knowing that your brother isn't a murderer, just a complete narcissistic, misogynist jerk!

Karl started to clue in on the fact that he was Jesse when asked by Danny to double-check the DNA results at Selena Callway's crime scene. He came and asked his dad, who has a picture of Karl on his nightstand, which picks at Mark.

Frank justifies his snatching Jesse, Jesse being his child as much as Julie's and the subsequent keeping as his reward for stopping the predator Jakob Marosi. Look how neglected he was that a five year old could just wander about the woods involving himself in 3 or 4 storylines one after the other!  Jesse saved his life and he won't ask for forgiveness, but he will be dying soon, if that helps Mark. Why don't they sit and wait for Karl? He comes over every day.

Ally and Pru are desperately trying to reach everyone, Mark, Danny, Slade, Karl, what's the point of a mobile if you don't carry it with you?? I will only say this once more, so no sour grapes, but it is a hallmark of bottleneck mysteries that everyone will immediately stop answering their phones once something actually starts happening.

Danny and Jennifer are cuddled up in bed, Danny's going to look into some proper care for his father, a home for those with dementia and Alzheimer's. Then they're going to go on a holiday and throw his phone in the river. That lovely moment is ruined by Slade calling, but of course, as above ^^^ he's not answering. He's Finally Figured Out What's Important.

Slade tells Mark to not be too mad, Frank saved Jesse's life that day. He's off to do something

Ally presses Ken back at the office, where's Karl, his conjoined twin? He swears he doesn't know, but is stupid enough to call Karl while she's still in earshot, saying "I think Ally's on to something." I mean. She snags him in the stairway, one hand to his throat and the other pressing on his testicles, what's going on???? Ken says Karl isn't dangerous, just confused. Ken's helping him because it was his mistake in bringing Karl to the crime scene and starting the whole Jesse mystery up and moving again.

Ahhh, and Ken helped Karl conceal his identity by splashing Karl's blood around at the Jay Newman crime scene, so he WAS involved.

Pru finally gets someone to answer her call, it's Slade and she needs to talk to Mark. But no, wait, it's not about Them, it's that she thinks Jesse is here; and in fact he is, walking in all leisurely, staring at the phone he's been apparently unable to answer for the last two hours.

Pru asks Karl / Jesse for a drink, but her weird staring is putting him off, his head is up and he's smelling something. He runs off, and she calls him Jesse at the last minute then gives chase on foot. Slade chases from another angle and traffic is helping them, but this re-enactment of That Day is freaking Jesse / Karl out even further. He keeps running and eventually loses Slade.

Danny finally meets up with Mark at the hospice, who spills the whole story then cries while Danny hugs him.

Frank is worried, Karl has always come to visit by now. He recognises Danny as well and goes on some more about the good life Jesse had, he was happy. "It's a shame the rest of us didn't" says Mark and that's really it, isn't it? Jesse was fine, eventually, after getting over missing his family and mum, Frank was fine, able to raise a child after losing the other two, but the rest of the Wells family was in hell for twenty years.

Since Karl ditched his car and thanks to Slade and a brick, they're able to search it and find some unusual stuff. Side note: when I die I need someone to come clear out all the weird stuff out of my room and online: nothing makes sense out of context. Any takers? Let me know in comments! ANYWAY, the odd stuff includes a library card to where Julie works and a metric tonne of bullets. I didn't think they let coppers have bullets in the UK, do they?

They brace Julie; they tell her that Karl's been staking out her place of work and they think he may be planning to harm himself or others. Like her. He's been there the day before, borrowing Gulliver's Travels and I guess he was the one that buried a copy in Jay's yard.

They flashback through everything from Karl's point of view but I am just digging on the song they play during. If I knew exactly what a Spotify was, I'd look up the playlist.

They find Karl in the woods where Mark knew he would be, Mark approaches and they reminisce about the past, the things they did remember about the few short years they had together. Karl has a great deal of anger towards Julie, who he thinks lied deliberately. Finding this all out has been untrue has torn his world apart; he used to say he had a big brother in school and they would call him a liar. Mark says it's time for him to take his brother home and holds out his hand. Karl takes it just as Julie and Alan appear and Julie dropping to her knees and crying, well, there was a bunch of us bawling just then.

Everyone reunites, Pru staring at Mark and then they hug and he loves her too. They'll find a way.  We're close the scene them kissing.

Alan and Jule comfort each other at the house while The Five recreate the walk away from the house again and more great music plays: I Rise Up by Andra Day and it's lovely, so I shall include to take us out.

I liked the story and I loved the characters, it's tricky to do something in a short series like this but I was carried along with everyone else. Thanks for reading for this series, I hope you enjoyed it as much as I did!